Honda has just revealed their all-new 2018 Accord sedan. The 10th generation of the Accord gets sleeker, more upscale, and for the first time since the fourth generation, it won't have a V6. The two-door coupe is gone as well. But it will have both volume and tuning knobs on the radio, and a manual transmission on the big engine.

Jeff Conrad, senior VP with Honda US called the new car "the most dramatic remake of Accord we've ever done." It's a new and sleeker style, with a roofline more like a four-door coupe than a conventional sedan. The nose looks more like that of the NSX than the Civic's large grilles and intakes. It also has Acura-like LED jewel headlights available. It shares the Civic sedan's short rear deck style, and the chunky chrome trim nose piece of the Civic and CR-V. Conrad emphasised that the new Accord would be the most fun so far to drive too.

The wheelbase has stretched 530 mm, the roof has dropped 15 mm, and the width is up 10 mm. The longer wheelbase goes mostly to rear seat passengers, who will get nearly 50 mm more legroom. While that's a boon for taller passengers, that sleek roofline might not do them any favours.

Trunk space is up 25 L to a class-leading 473 L. For hybrid buyers, the hybrid's repackaged battery gives it the same space as the gas-only model, plus allows it to keep the split/fold rear seat. 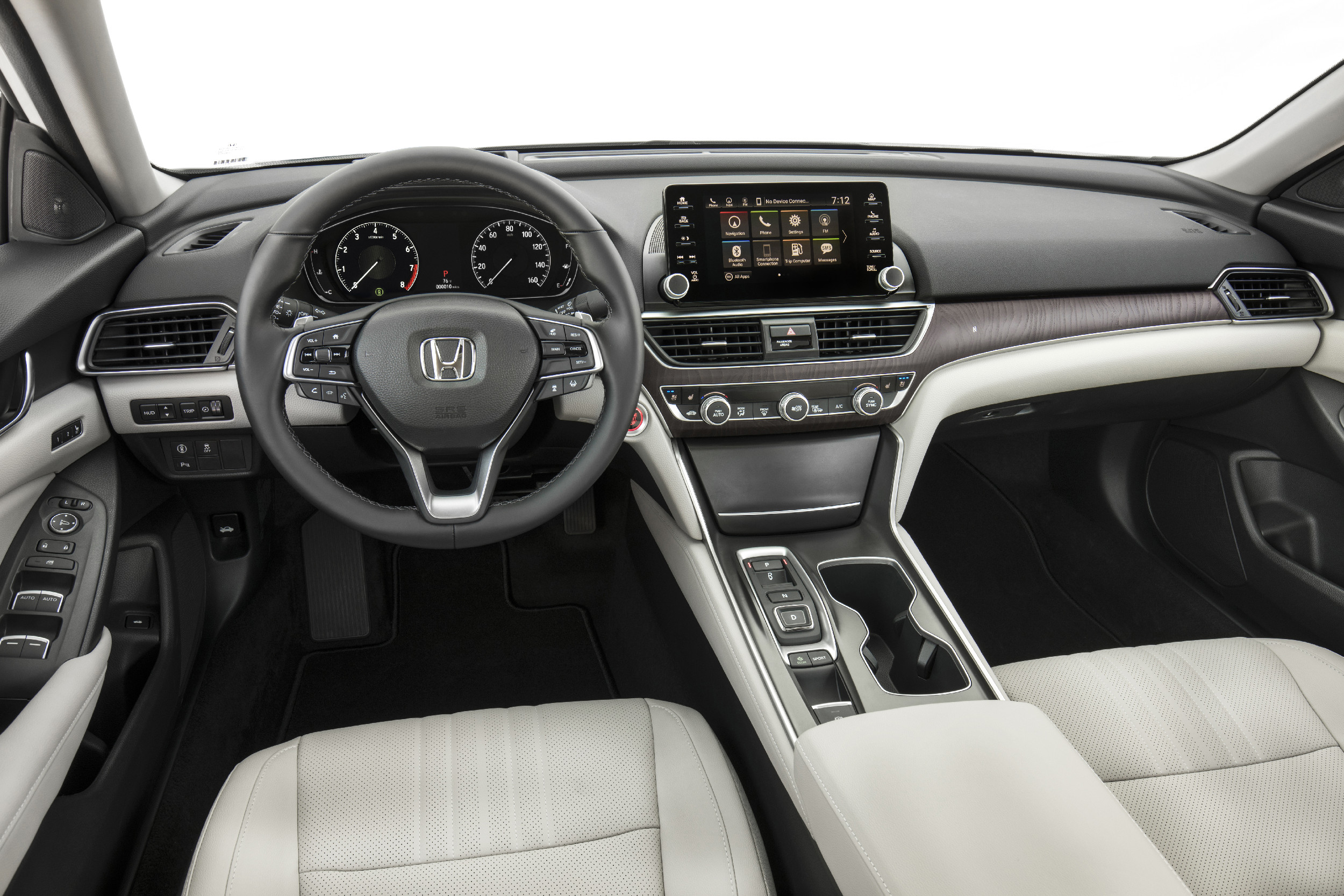 There are three new powertrain choices available. The first is a 1.5L turbo-four that produces 192 hp and 192 lb-ft. That engine can be had with a CVT or a six-speed manual. The most powerful 2.0L turbo four is related to the Civic Type R engine, but here makes 252 hp and 273 lb-ft. That's more torque than the previous V6. A new 10-speed automatic is available, but so is a six-speed manual. Conrad said that Honda hears the cry to save the manuals. The hybrid powertrain uses a 2.0L Atkinson cycle four-cylinder, along with two new electric motors that contain no heavy rare earth metals.

The chassis uses aluminium in the suspension and subframes to reduce weight. There is also a new two-mode driving system standard that has a sport mode to adjust the handling to suit the driver's wants. All new Accords will come with adaptive damping for an improved ride and better handling. 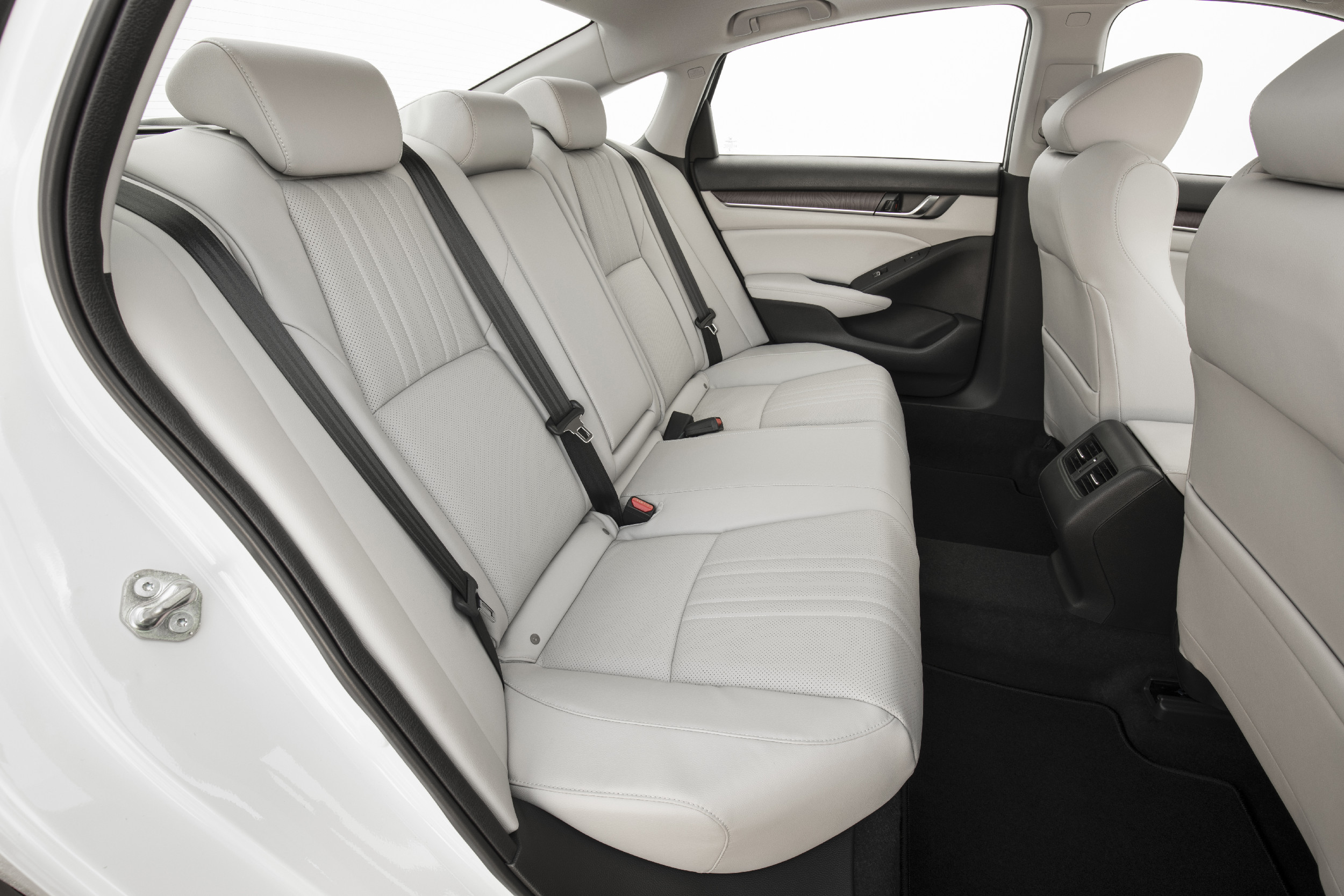 Inside, the Accord gets A-pillars that are 20 percent thinner, to improve visibility. The cowl is lowered to give the same effect. The seats have been moved inboard to improve freedom of movement. It's also given room for thicker armrests with more padding.

There is a new 7.0-inch display to relay information to the driver. The infotainment system is a new 8.0-inch Display Audio screen that Honda is eager to point out has both volume and tuning knobs. Apple CarPlan and Android Auto are standard, and if will offer Honda's next-generation Honda Link that includes roadside assistance, remote unlocking, geofencing, and more. Top trims will have a 6.0-inch head up display that can show speed and car information or navigation directions. The system will be able to receive over the air updates.

More details, including the full list of trims and features as well as pricing, will be available closer to the full launch this fall - right around the time an all-new Toyota Camry debuts as well.