EDGE OF REALITY (aka NASHVILLE, TN) – This past week, central Nashville has temporarily replaced Times Square as the Centre of the Universe for two reasons. First, this weekend is the Country Music Association (CMA) Music Festival – a lead-up to the CMA Awards ceremony in the fall. Chevrolet is a major sponsor of the CMAs – their logo is everywhere. The company is hosting a pre-CMA event for seven auto writers who play music to write about being in “Music City” and making some music here ourselves at this special time.

Even for decent writers, it’s hard to explain how important country music is in this town. Until recently, you could have said it’s like hockey in small-town Canada. Which leads to the second reason, which you probably already know.

Nashville’s professional hockey team has advanced to the Stanley Cup Finals, and the town has embraced hockey, bigly. (At the time of writing, the teams were still in contention. You know better now.) 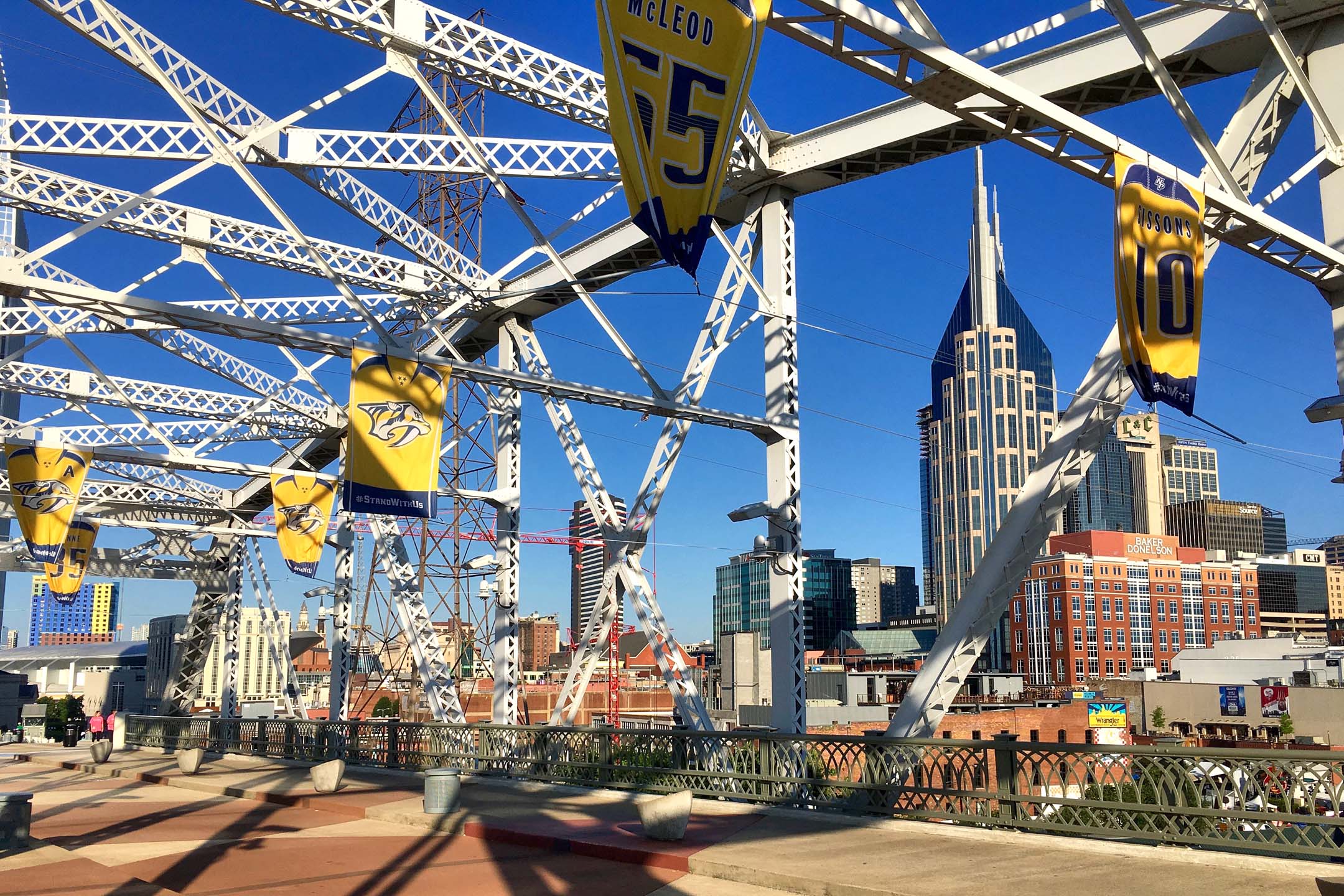 The Predators’ logo is everywhere, the team’s victories and defeats buoyed by euphoric hysteria. Now, to describe the fan behaviour pre- and during game time is a bit of a stumper too: somewhere between a NASCAR race, Trump rally and born-again riverside church revival.

It’s bizarre, almost unsettling seeing such a traditionally non-hockey town embrace the sport so utterly. It was “ice hockey” just five years ago. (“When a Canadian hears ice hockey,” I explain, it sounds redundant, “like saying outdoor football.”) So it’s the perfect place and time to wear a Maple Leafs shirt with the retro ’70s version of that logo. 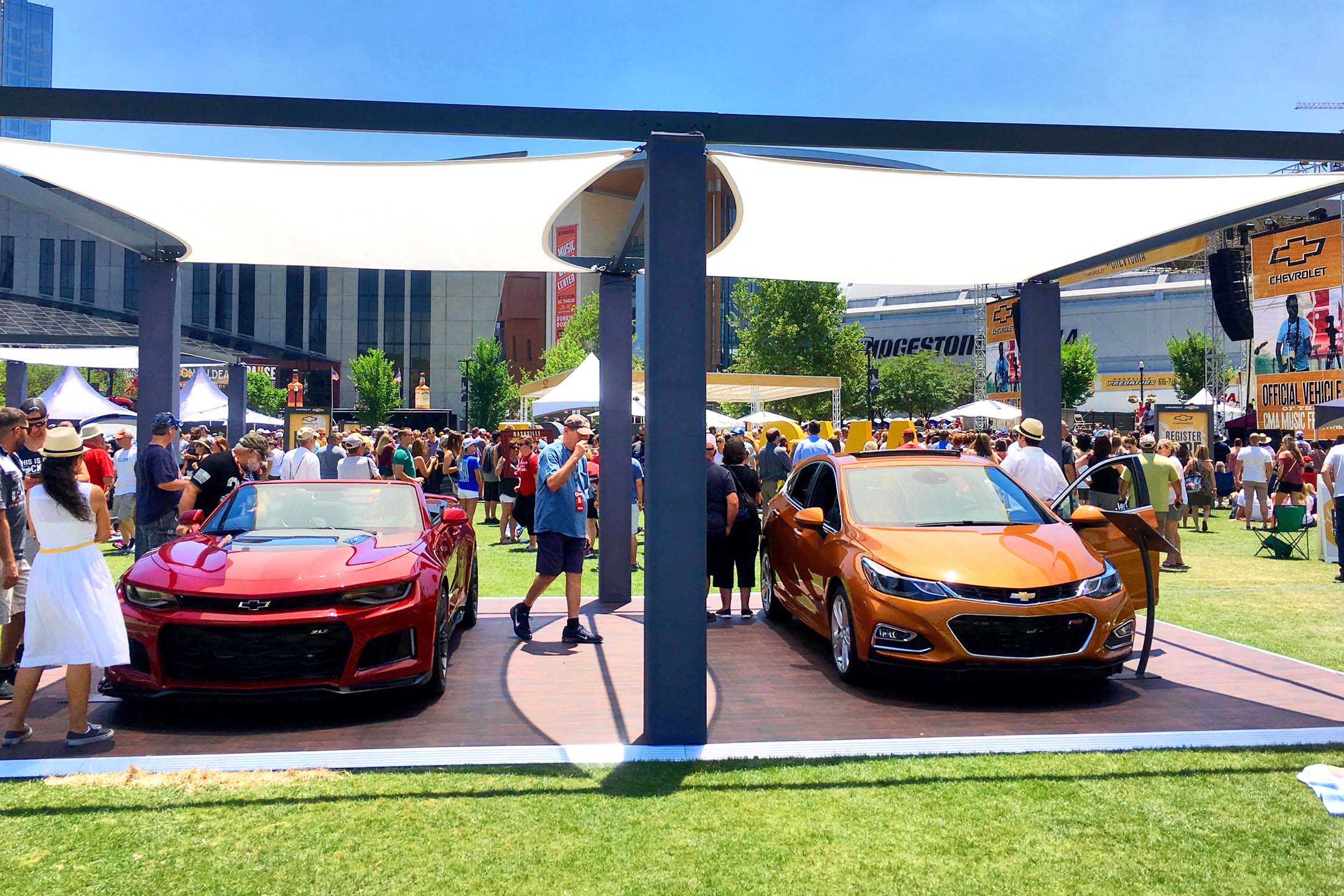 Speaking of which, traffic during this week is reaching Torontonian proportions. The laid-back and s’uth’n hospitable attitude of the locals is being replaced on the roads with drivers who ride the shoulder and poke their noses into traffic at the last minute. It’s sunny and hot here during this entire trip. So road rage rampages are surely not far off in the future. And no wonder: The city’s exploded over the past decade – construction is ubiquitous and visitors abound.

Our Chevrolet hosts say 300,000 outsiders will further clutter this bursting city of 1.75 million this week. Think about that. If you woke up 15 percent heavier tomorrow, you’d probably slow down too. For revellers that slowness is great, provided you haven’t chosen to drive near the centre of town. 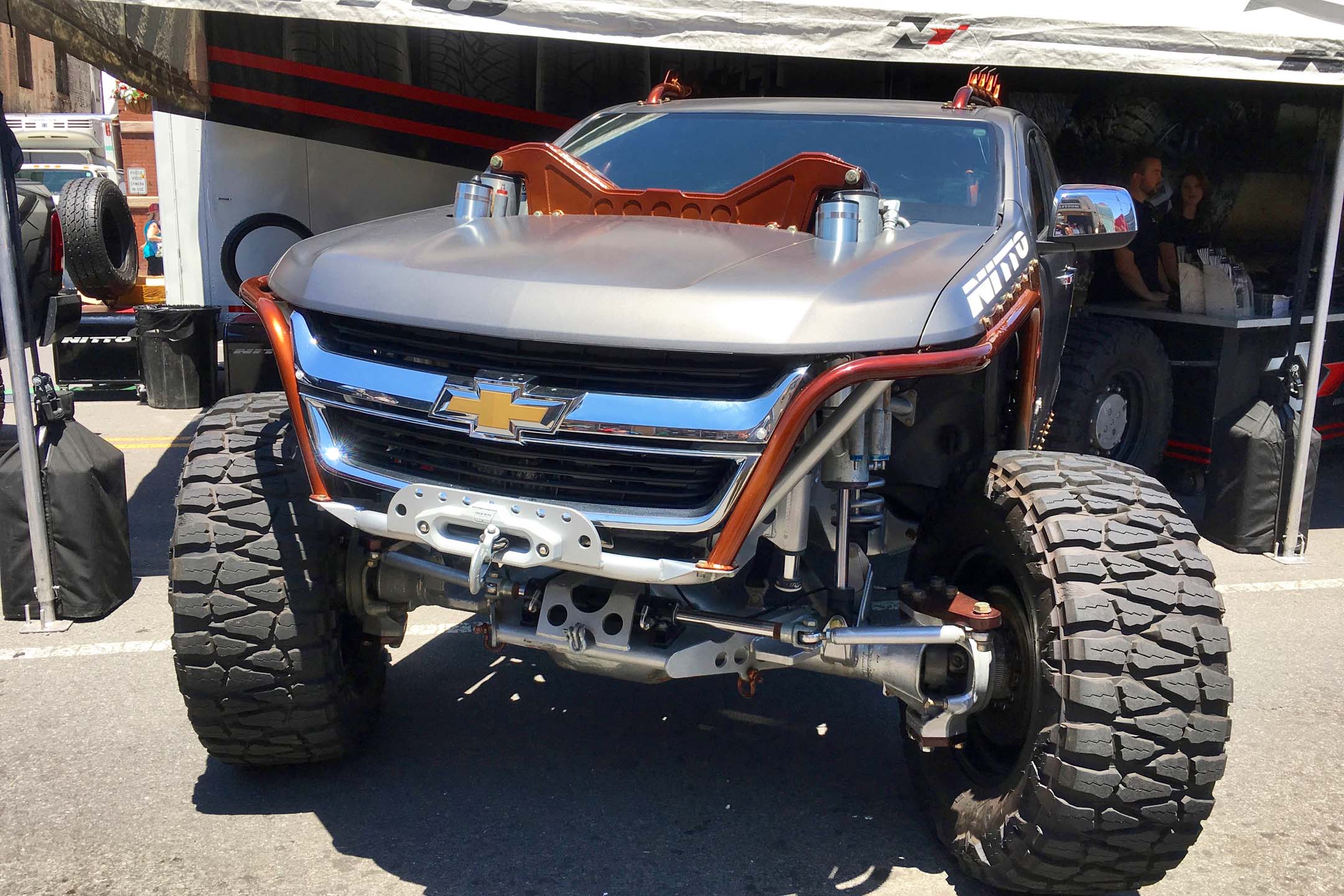 Despite the heavy Chevy corporate presence, there are surprisingly fewer domestics than preconceived notions of the South would have you believe. There’s a shockingly high number of supercars – mostly Italian and German – shouldn’t they all be in Montreal for F1 this weekend? Clearly Nashville is also home to a lot of wealthy folks. Don’t be fooled by the white T-shirts and cowboy hats. The One-Percent here is probably closer to three percent.

Speaking of non-domestics and supercars, the town of Franklin, Tennessee – it’s almost Nashville now – is home to the North American HQ of Nissan. Last week they donated “Predzilla” to the Nashville Predators Foundation. No, it’s not what you get when a gorilla falls in love with a pretzel, but a 565 horsepower GT-R Premium painted in the Nashville Predators’ bright yellow and splashed with the team’s logos. It has a value of US $109K, and will be auctioned off to those local wealthy drivers; the funds raised will go to support the local community. 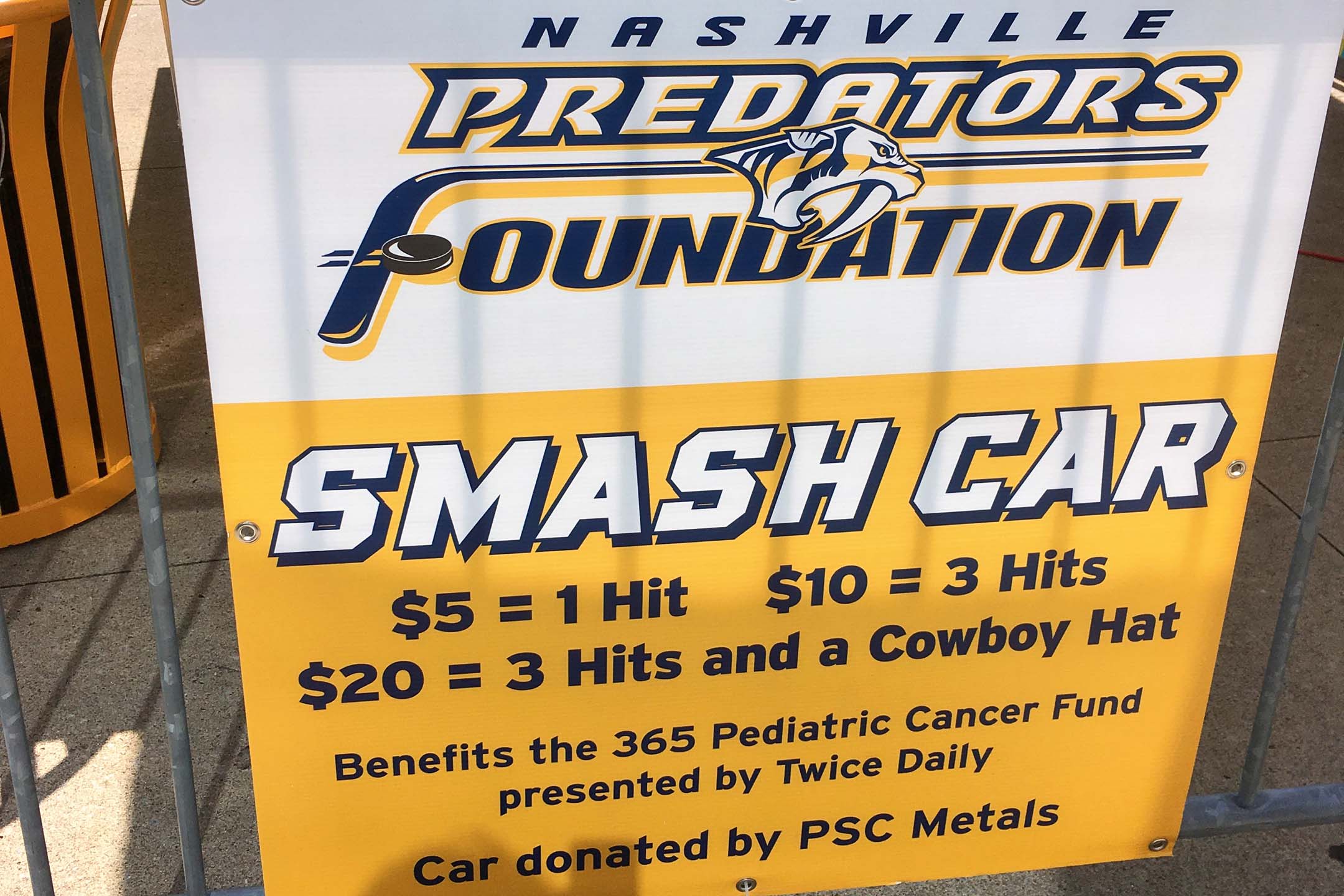 Speaking of the Nashville Predators Foundation: if you were in town on game day, welcome to “Smashville.” Pay $5 towards their cancer fund and you can take a sledgehammer to an old car painted in the colours of opposing playoff team, most recently the Pittsburgh Penguins. What a great idea for locals: Beat on the 1) opposition 2) cancer and 3) an old car – call it a cowboy hat trick!

Wisely, the Nissan GT-R isn’t displayed anywhere near the Smashville beater. The two team’s corporate colour schemes are surprisingly close and as passionately as the locals have embraced hockey, some slightly colour-blind or blind-drunk fan might swing at the wrong logo.

Ask anyone with a Y chromosome over 25 years old: testosterone mixed with alcohol often leads to poor decision-making. 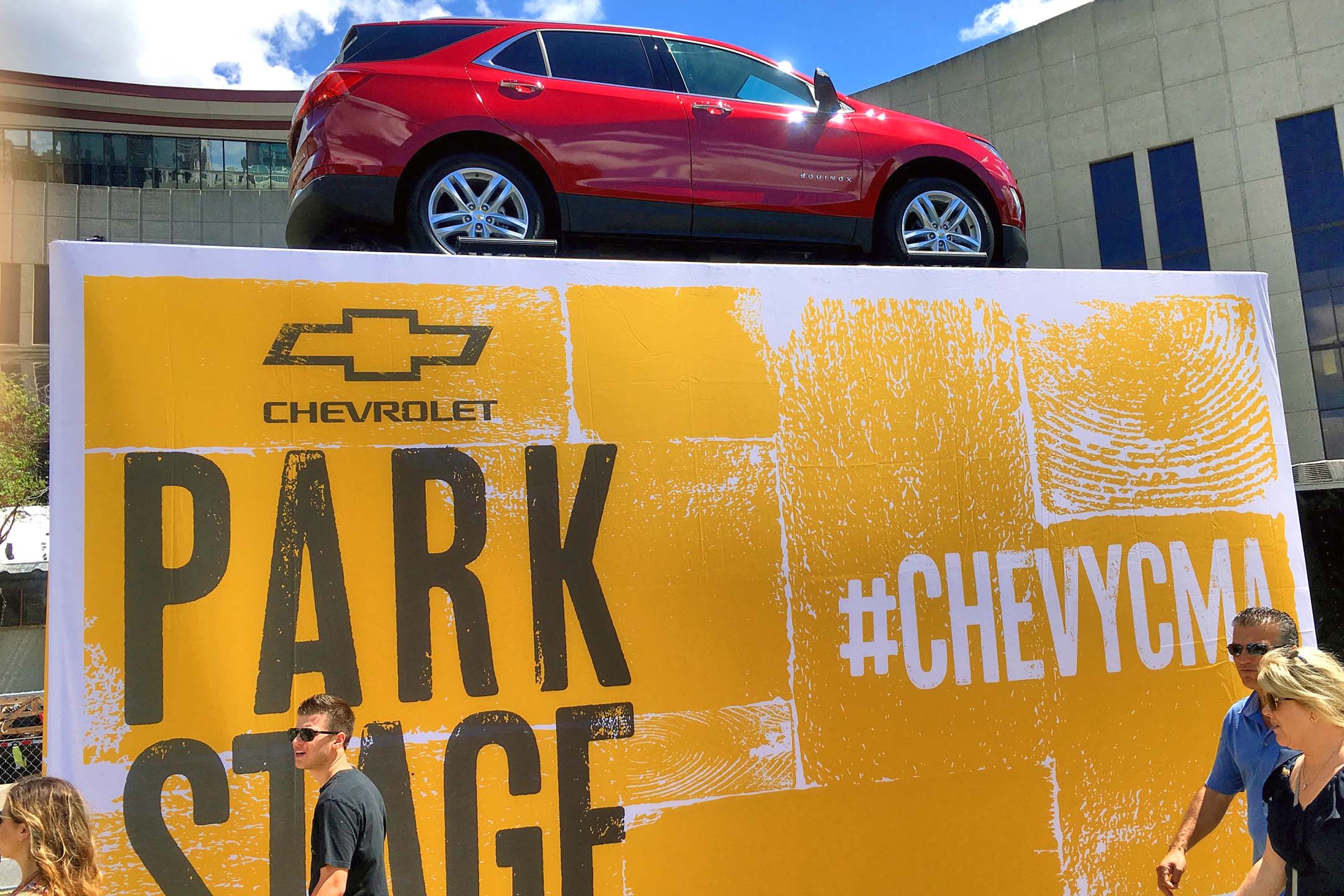 The public square behind the arena has been taken over by Chevrolet, where they’ve set up a stage for live country music. Their lineup of cars is tastefully arranged throughout the park, several beneath sunshades. The 2018 Equinox, which I’m ostensibly here to drive, sits high atop a banner-strewn stand.

Across the street from the other side of the arena is where the Broadway honky-tonk scene begins. It’s two blocks, chockablock with bars big and small on both sides of the street, which feature live music all day and well into the night. The population setup of this town is a perfect storm for success. There’s a long history of Nashville as a live music scene. It’s not an exaggeration to say the town’s status is legendary and people come from all around the world to experience these two blocks. 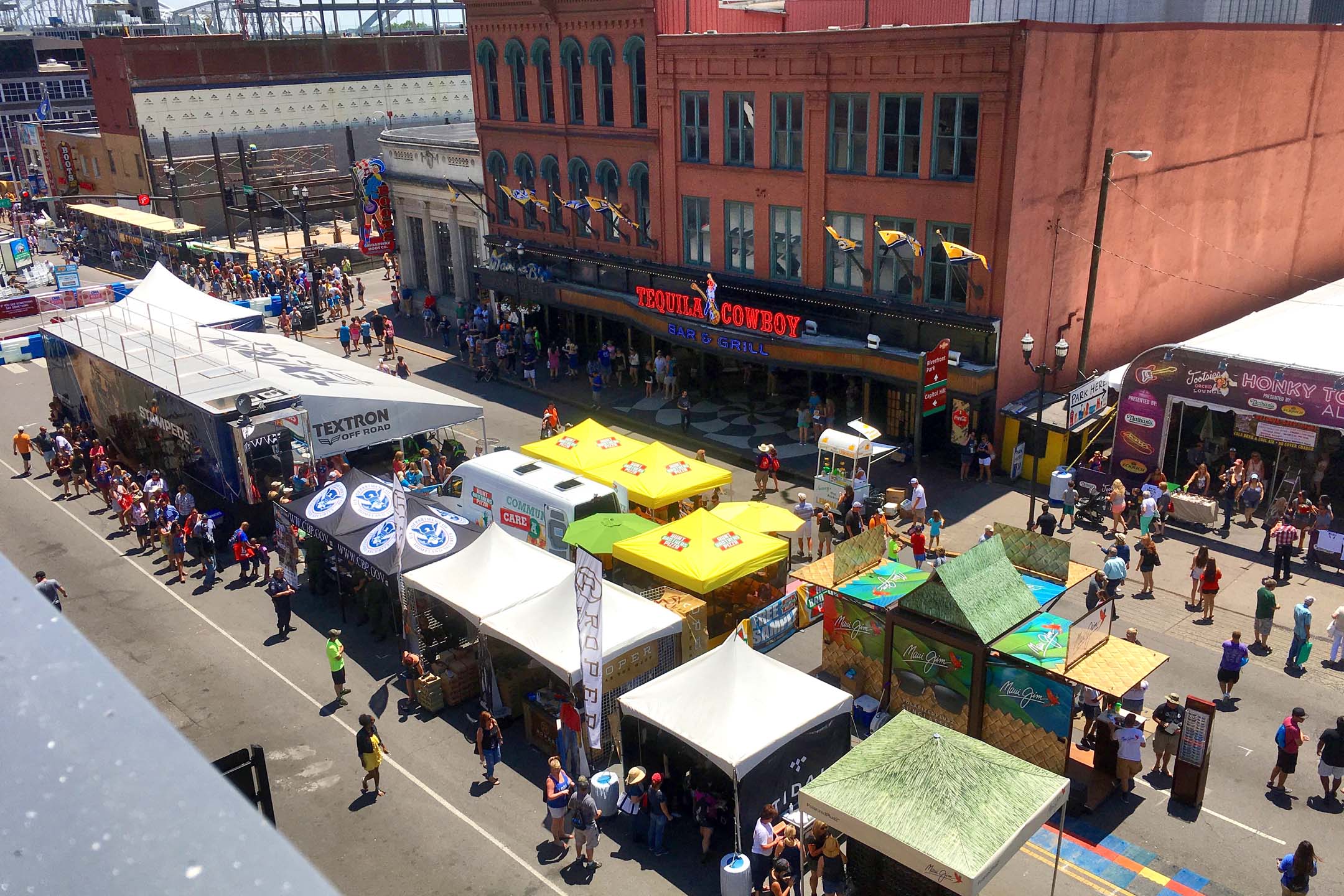 The fun starts pretty early because so many older people, especially aging American country music fans, come here to pay respect at least once before movin’ on. Picture Mecca with booze.

However, Nashville is also bursting with youth: over twenty colleges and universities, six community colleges and eleven technical schools. There’s a joie de vivre on these streets. Picture Montreal with cowboy hats. These younger folk tend to appear in the evening when the older types have drunk themselves stupid and staggered back to their hotel rooms for rest and meds. It’s great turnover for the bands, all of whom play only for tips. 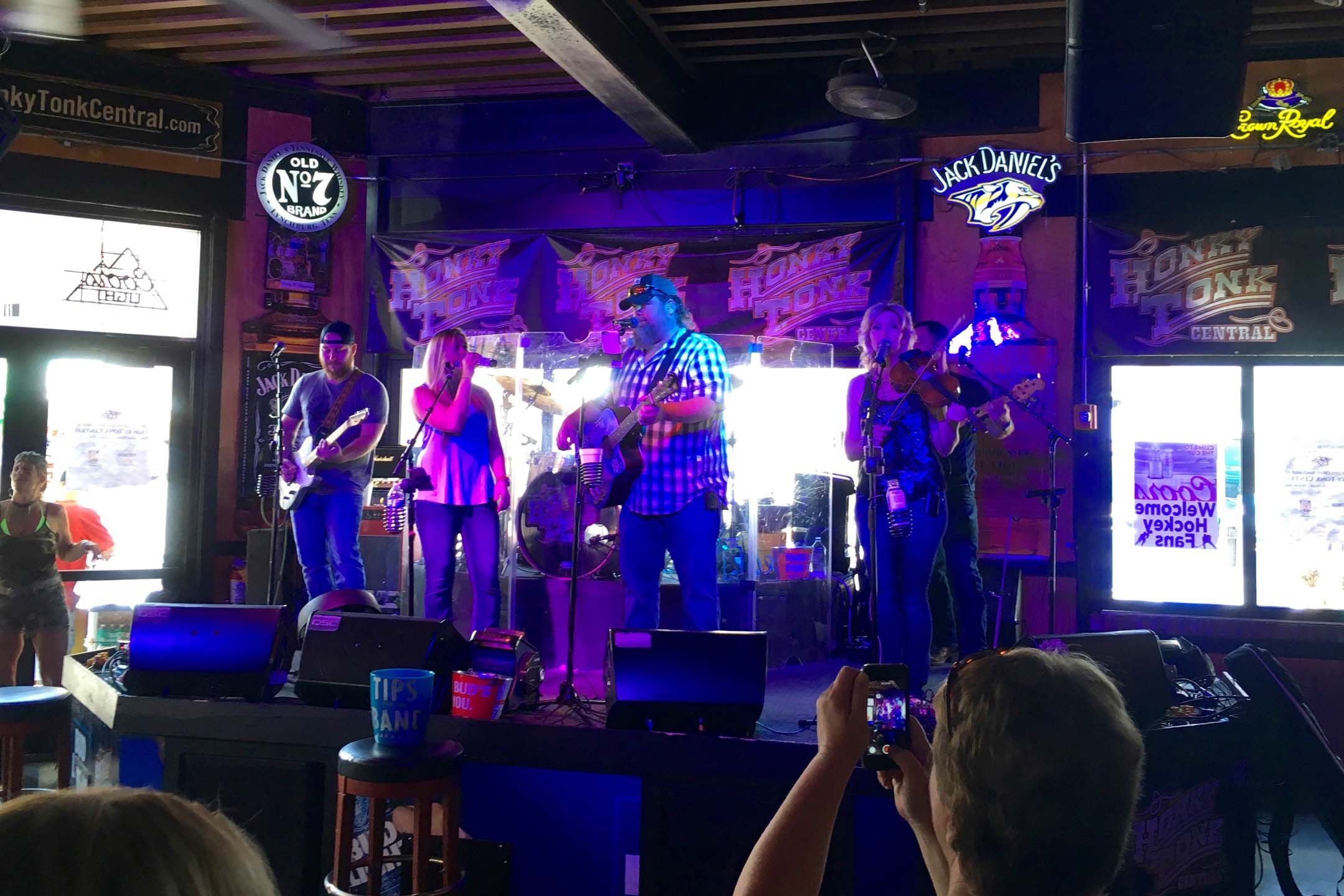 At the biggest bar on Broadway, Hoss Skelton – a photo’s here but picture Redneck Meatloaf – and his band play superbly before noon, making live flawless four-part harmony sound easy. They take requests for cash. As said, it’s not noon yet, but the bar’s seething with fans, many of whom are halfway to Margaritaville. A tipsy granny sends a twenty onstage with a word balloon from Andrew Jackson’s mouth, requesting some Carrie Underwood.

Hoss’s gal singer belts out Jesus Take the Wheel with such naked hurtin’ passion, the hairs on the back of my neck stand on end. There’s a lump in my throat by the first chorus and, by the end, I have to hold back from weeping. It was perfect. It seems so easy to feel at home in Nashville. But when Hoss starts to play the crowd, asking if anyone here luhvs thar country and to raise their glasses and holler allegiance to the troops who are out thar fightin’ fer yer freedom, I feel distinctly out of place, NHL logos be damned. Time to move on.

The roads in the surrounding countryside are a driver’s paradise 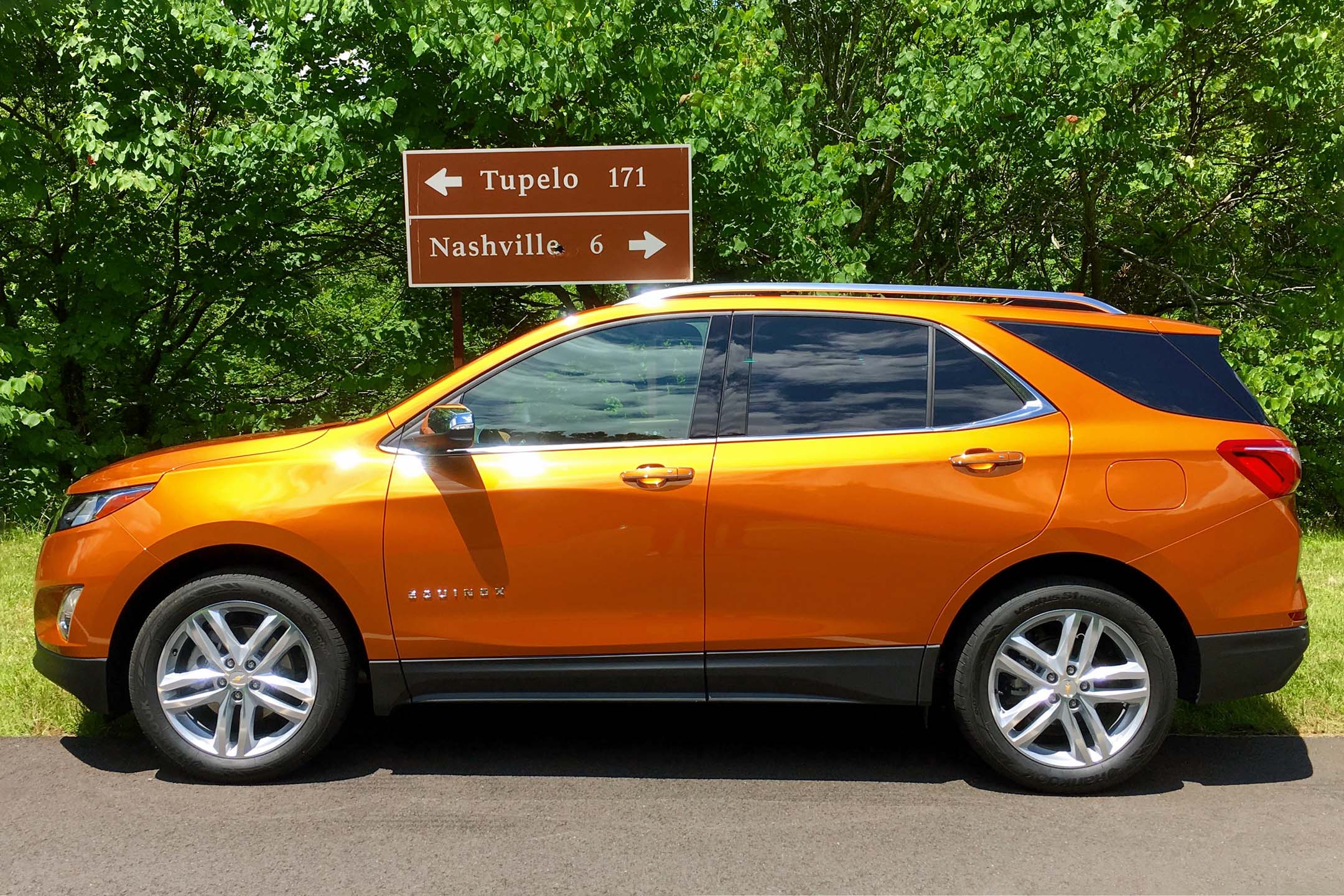 This trip involves a first drive of the 2.0-litre turbo four engine upgrade of the 2018 Chevrolet Equinox. Chevrolet has a long tradition of ties with country music. Over 1,000 popular songs contain references to Chevrolet or Chevy. It makes sense to be involved and to be seen to be involved in the CMA euphoria. They even offer a free shuttle service within town. But on the practical side, the local roads just out of town are terrific for testing the dynamics of any car. (One of the supercharged Italians would be extra sweet.)

You get plenty of hills and long turns interrupted with sudden dips – so go easy on the barbecue if you have any tendency to motion sickness – and smooth blacktop that suffers very little winter contraction and remains as unblemished as Taylor Swift’s complexion. There’s very little traffic once you’re out of central Nashville, so those easier-to-maintain roads aren’t beaten to death from constant pounding.

Part of the route we take at first follows the Gold Record Road, hallowed ground for music fans. It meanders from Nashville past the sleepy hamlet of Leiper’s Fork to Memphis and ultimately all the way down to New Orleans – though we zig-zag a bit and get no farther than Leiper’s Fork. Last year this limited crew of five American writers with me and one other hoser did a similar trip, veering off the traditional Gold Record Road route to visit and record a song at the legendary Fame Studios in Muscle Shoals, Alabama. It was a bucket-list experience that none of us realized was on our bucket list because the thought was simply too audacious.

Today, Chevrolet has another mind- and eardrum-blowing experience for us 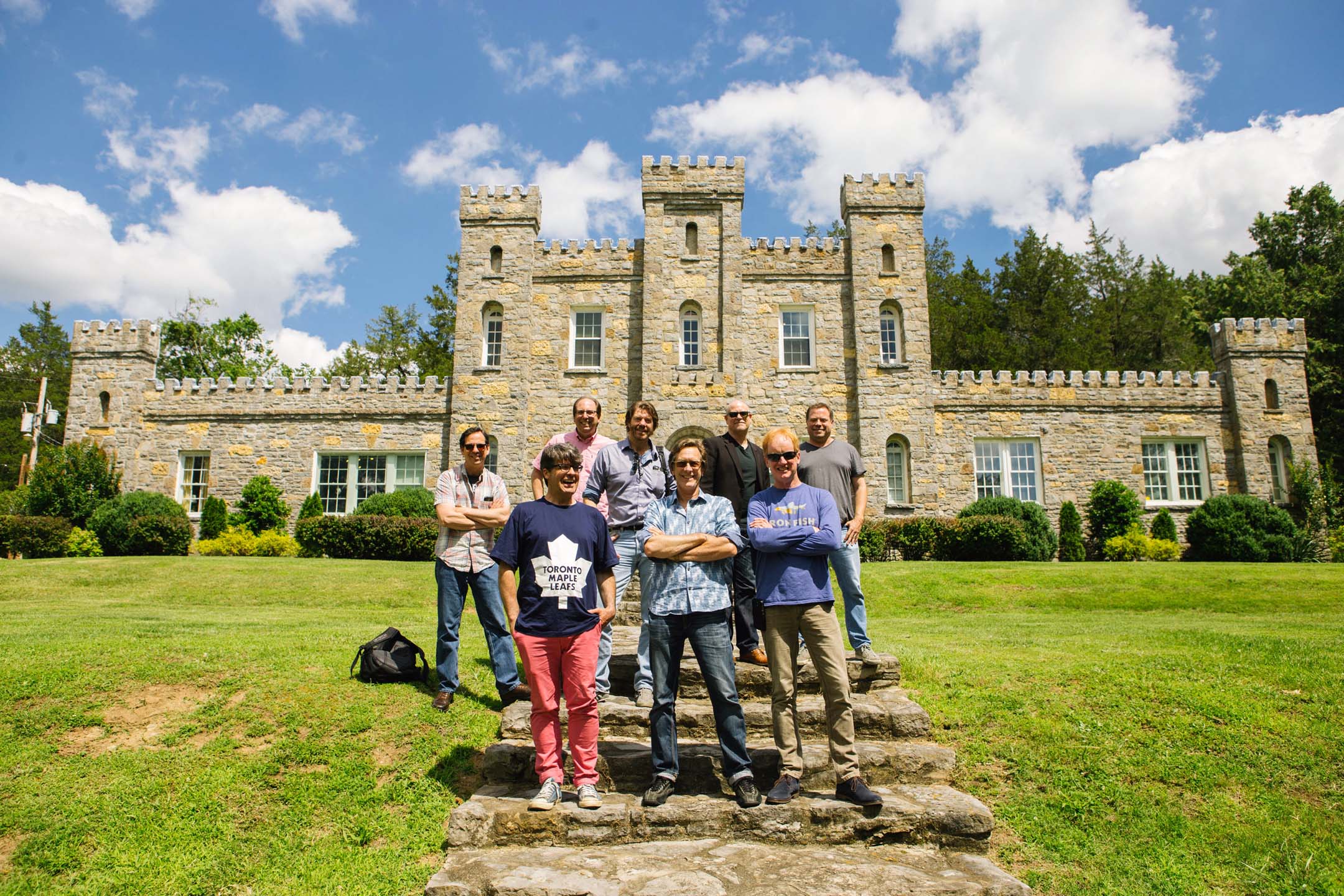 12:30 pm: We park the Equinoxes outside the Country Boy restaurant and venture inside. We take guitars from the walls and play through courses of fried green tomatoes, fried dill pickle slices and some of the finest fried chicken you can imagine and your arteries can stand.

The recording studio we are to visit and record at today, Castle Studios, has legendary status of its own and some notoriety. Meaning? Al Capone built and used this structure as a stopping-off point during long drives between his Chicago and Miami operations. (Nashville is almost halfway between the two Sin Cities.) The building does have castle pretensions. A battlement lines the roof. Bodies may have been disposed in the “moat” on the edge of the property.

Castle Studios’ location is ideal for surreptitious sin. It’s just twenty miles to Nashville as the crow flies and takes less than a half hour to get downtown but, during the Great Depression when it was built, would’ve been two hours away. Plus, even today it’s well sequestered from prying eyes, no doubt by design. The structure sits atop a hill and, from there, a wise guy can see who’s coming and going. 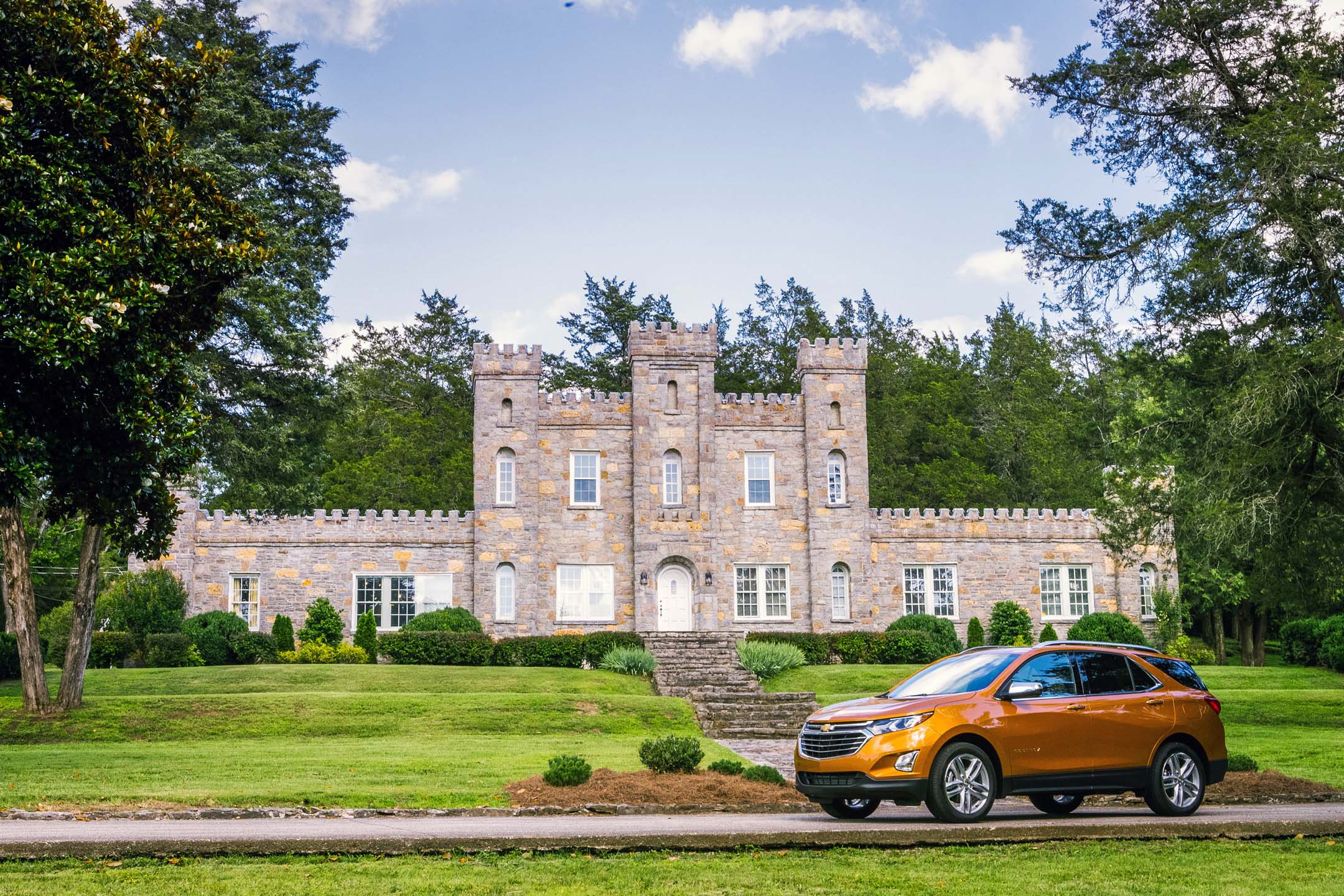 It wasn’t simply a country cottage for a two-bit nogoodnik, but a clandestine casino for gamblers. The cheeky builders even designed patterns into the stone walkway that hint at the establishment’s purpose: a heart, a diamond and what could be “flowers” that look a lot like roulette wheels from overhead.

Speaking of hallowed ground, the names who’ve recorded here include Bob Dylan, Bruce Springsteen, Neil Young, Johnny Cash, BB King, Dolly Parton, Kenny Rogers, Hank Williams Jr., Al Green, John Hiatt, Etta James, BB King, Lyle Lovett, Lynyrd Skynyrd, Snoop Dogg – and us. Though this is the second year we’ve recorded with Chevy, we have yet to decide on a name though there is some love in the room for a sign I found to direct deliveries behind a Bank  of Nashville: 18 Tons or 2 Axles. 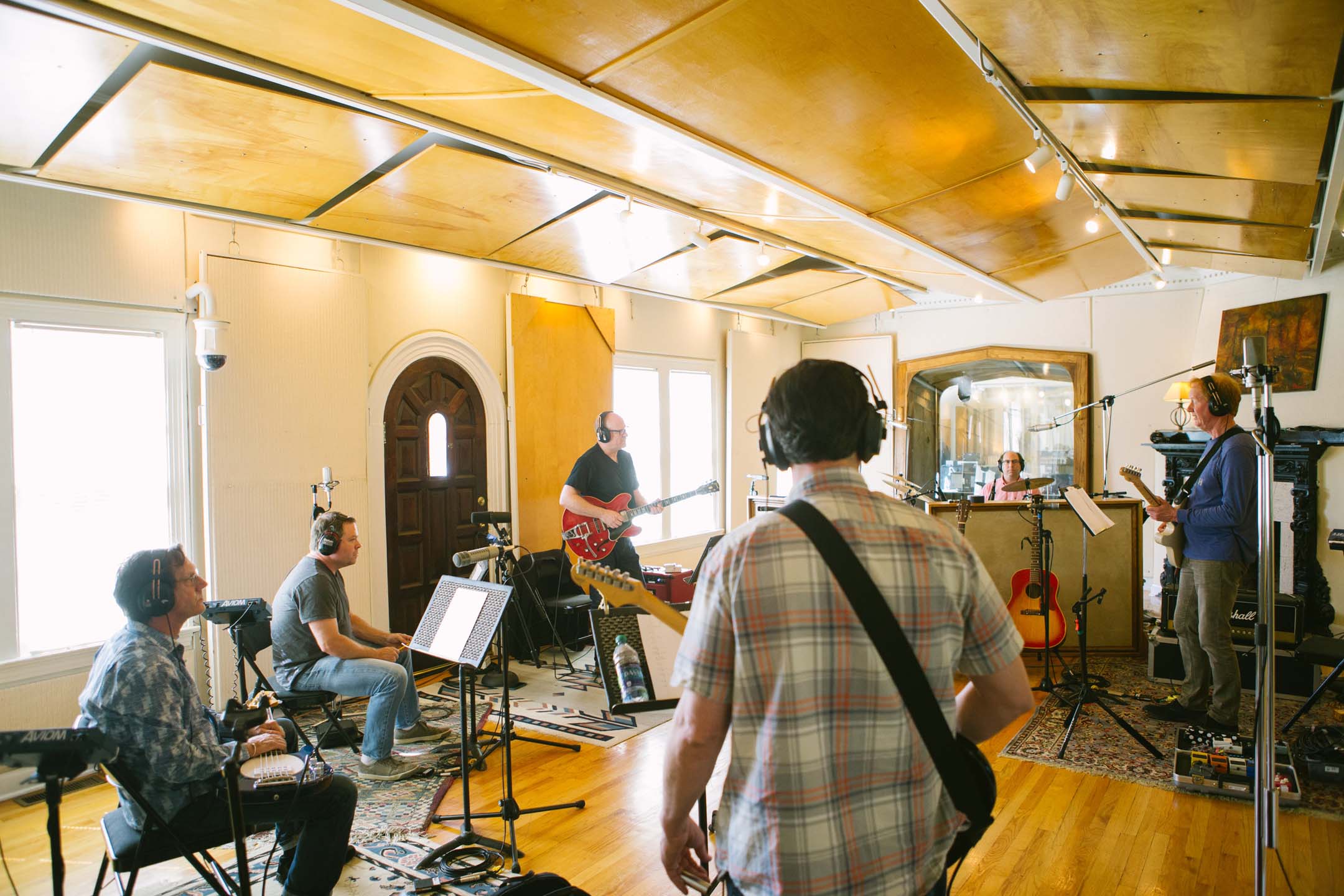 We record a couple of songs that were originally recorded here: Let the Good Times Roll by BB and It’s Five O’Clock Somewhere, baritone Alan Jackson’s hit about playing hooky from work and getting hammered. Both songs feel appropriate. This has been a very fun and memorable few days. Technically we are working but it shor don’t feel that way.

Two of us seven are serious players, functionally professionals. The rest of us cannot pretend to have made poor career choices. If other versions of those two songs ever become hits again, they will not be ours.