In the early 1960s, the Volkswagen Microbus wasn’t the only small van powered by a rear-mounted, air-cooled, horizontally opposed engine and a cab design where the driver and front passenger sat directly over the front wheels. From 1960 to 1965, Chevrolet sold the funky-looking Greenbrier Sportswagon, a nine-passenger family hauler based on the Corvair chassis with the same rear-mounted air-cooled flat six-cylinder engine. Our Find of the Week is a 1964 Chevrolet Corvair Greenbrier Sportswagon located in Beaumont, Alberta. 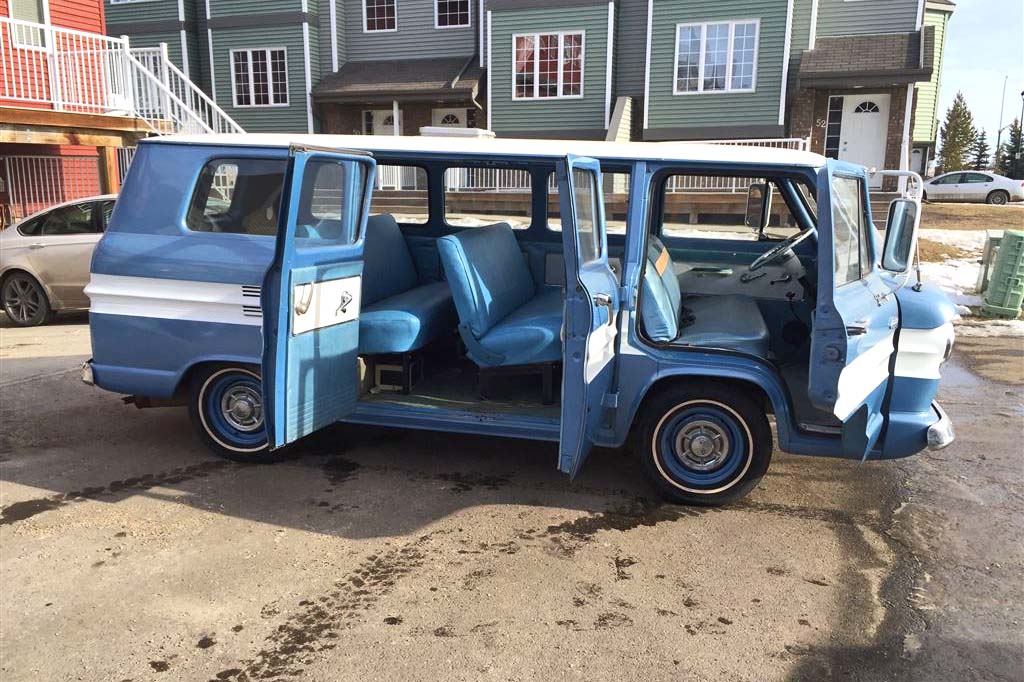 Most Greenbrier Sportswagons had six doors in total: two for the driver and front passenger, two more on the right side for accessing the rear passenger cabin, and two at the rear for the cargo compartment. It was also possible to order two more doors on the left side of the Greenbrier to access the passenger area from that side.

Using the same platform, Chevrolet also offered a “Corvan 95” panel van without rear side windows, and Corvair “Loadside” and “Rampside” pickup trucks, the latter with fold-down side panels as well as a fold-down tailgate. 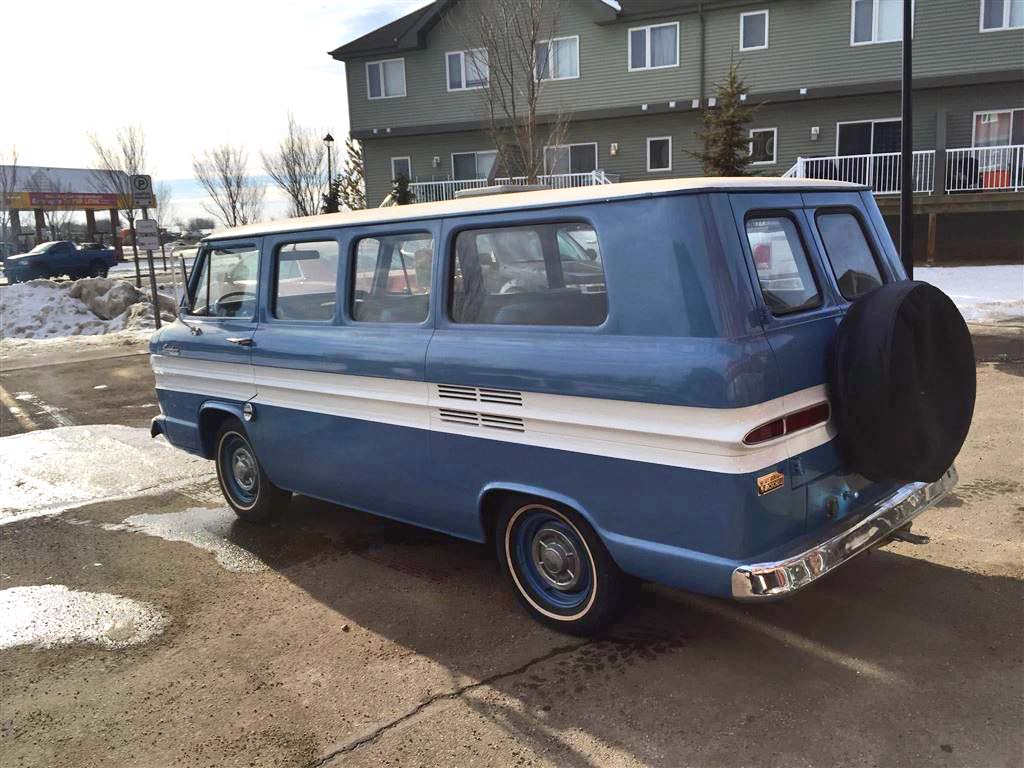 Like the VW Microbus, the Greenbrier driver sits near the front of the van over the front wheels and has excellent forward visibility. Positioning the driver and front passenger so far forward frees up plenty of room for two additional rows of seats behind plus a rear cargo area with a raised rear floor, similar to the VW Microbus.

The Greenbrier driving experience is unique: the steering wheel has a shallow angle and the front wheels turn underneath the driver requiring a modified driving style similar to driving a bus. The air-cooled engine chugs away at the rear in muffled tones typical of a boxer engine. 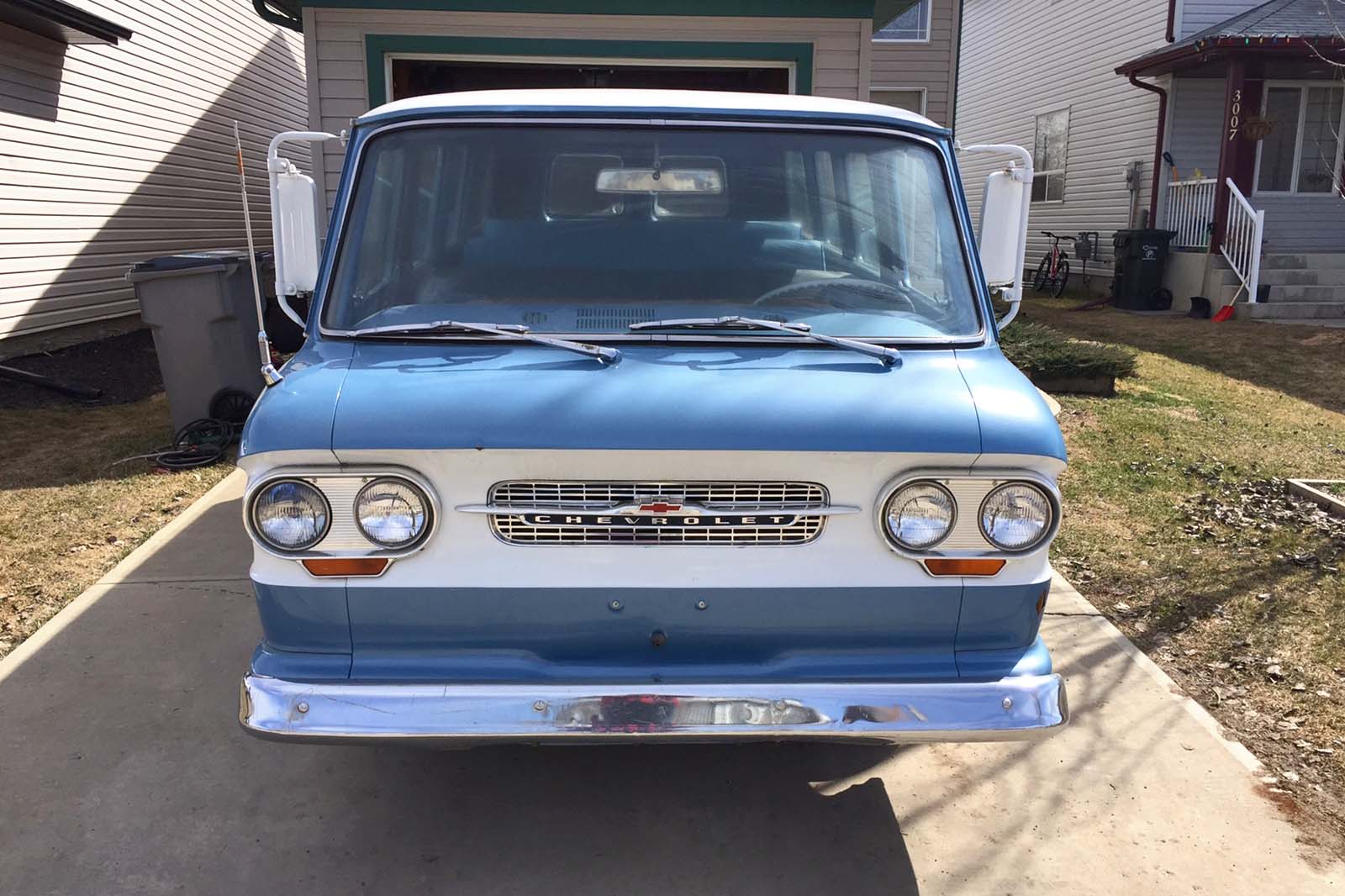 The owner says this Greenbrier is in “mint condition” and is “definitely a head-turner.” With 97,000 miles (156,000 km) on the odometer since 1964, it’s done an average of just 3,000 km a year! The owner says it was kept in a heated shop for the last 35 years and though he doesn’t drive it very much, it starts and runs every time he turns the key.

Unique, very rare and very cool, this air-cooled Chevy van is surely a candidate to be a future collectible.