GM expanded their Colorado lineup with a surprise unveil in LA – a genuine hardcore off-roading variant of the popular mid-size pickup.

We had a brief demo of the 2017 Chevrolet Colorado ZR2 and its considerable talent as a rock crawler in a ride-along with Lead Chassis Engineer Gary Klein. Although short, the course featured elements that showed off the ZR2’s suppleness over chunky road blocks, and torsional rigidity in some dramatically banked turns. What really impressed was the adaptable suspension’s ability to handle some extremely sharp drop-offs, then soften for regular driving duty. Purpose-built off-road suspensions are traditionally stiff, which sacrifices ride comfort on the road, but a compromise lessens its ability in rough terrain.

Credit for the ZR2’s chameleon-like adaptability goes to Multimatic, a Markham, Ontario, company famous for its work with Formula 1 and exotic performance cars.

Klein, who led the development of Multimatic’s work on the Camaro Z28, said he approached the company afterwards to “talk about new steps.”

“Everyone got their pens out, they all leaned forward… and I said ‘a truck’.”

“And this roomful of people just went silent.

“This is only the fifth road car to feature that technology. Who would have thought, looking at the list of those four vehicles, that number five would be a truck.” 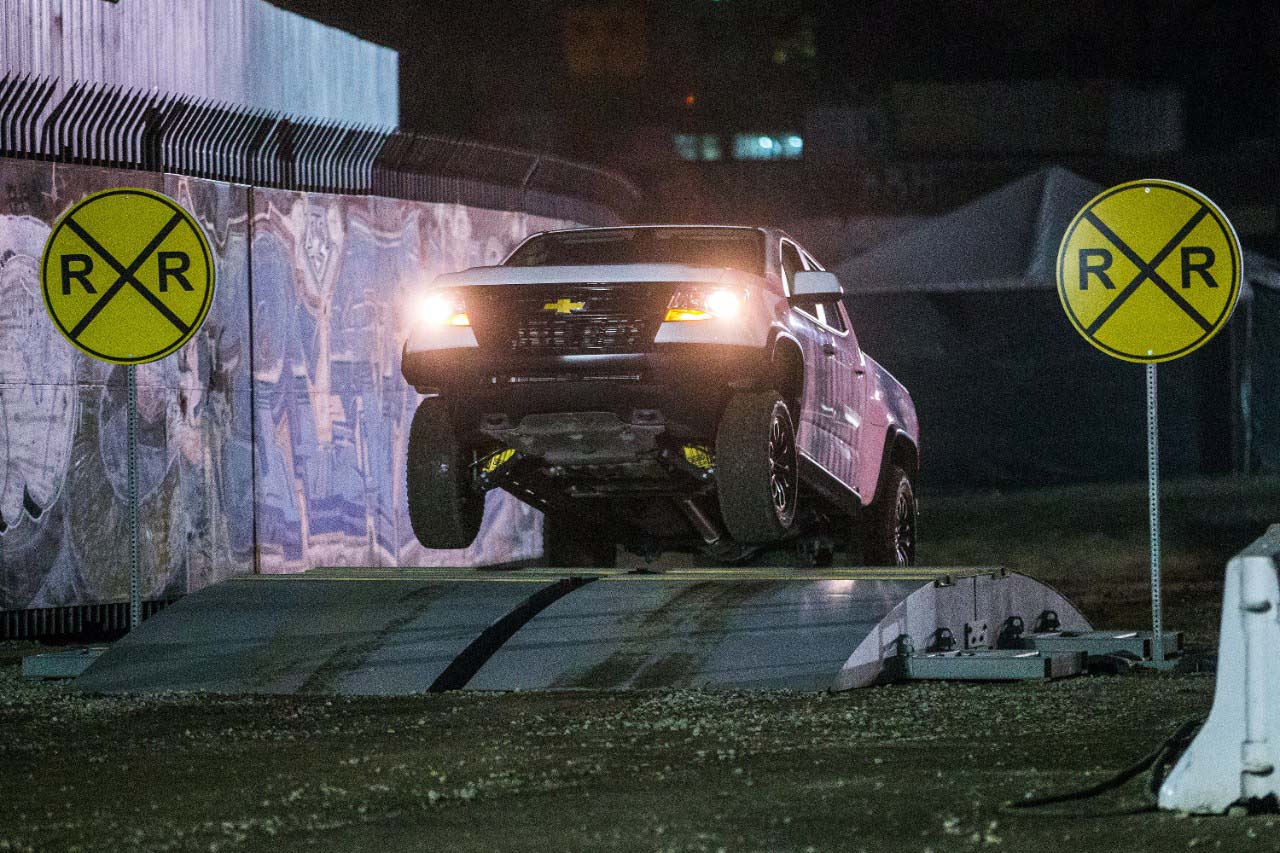 Multimatic’s development of their Dynamic Suspension Spool Valve (DSSV) dampers for the Colorado ZR2 are the first application of this technology in any off-road vehicle.

Instead of the traditional disk valve used on most shocks, the DSSV consists of an aluminum body with two spool valves within, which release or compress the amount of hydraulic fluid depending on the terrain requirements. A third piston-mounted spool valve adds additional compression damping for more hardcore off-roading.

Looking to spec out your own? The ZR2 is an option on the Colorado Z71.

“Basically, the ZR2 takes up where the Z71 leaves off,” said Klein. “This is more extreme, and one of the ways you can tell is the tires. The Z71 uses the Goodyear Wrangler kevlar tire. That’s a great tire for what that truck is. It’s on-road – but it can go off-road. 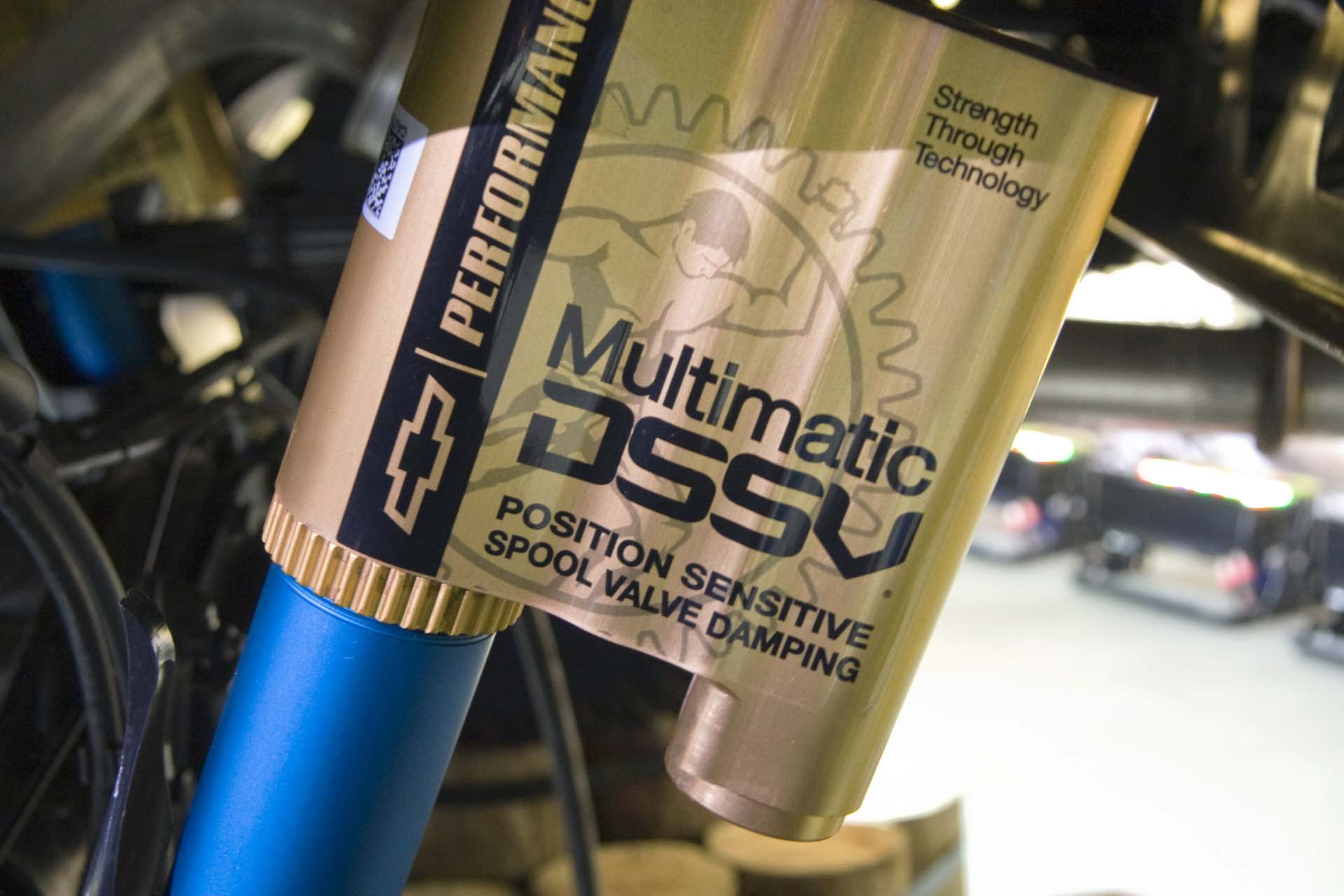 “This truck is serious about off-road, but will be comfortable on-road. For it, we selected the Duratrac, which is on the more extreme end of the scale for an off-road truck.”

The course consisted of a rock-climbing demo, consisting of large chunky blocks, a railroad track, a section of vertical posts replicating trees and a massive steel track arching high above the stage where the ZR2 made its debut.

“Mount Colorado, I like to call it,” said Klein. “It really demonstrates the traction of the vehicle having not just a rear locker, but a front locker as well.”

Is there a centre locker?

“Yes, basically there’s a transfer case, and when you go into 4-Lo, or 4-Hi you’re locked.”

There’s an auto mode which, like an all-wheel drive, distributes power as needed.

The ZR2’s advanced adaptable dampers give it a distinct advantage over its competitors. Flat pavement with a few curves produced none of the crashing, or skittery rear end inherent in a lot of stiff suspension setups. It was supple, yet had enough instant compression to handle the crashing drops during the rock crawling section. The 30 degree approach angle, and tapered bumpers provided more than enough clearance. 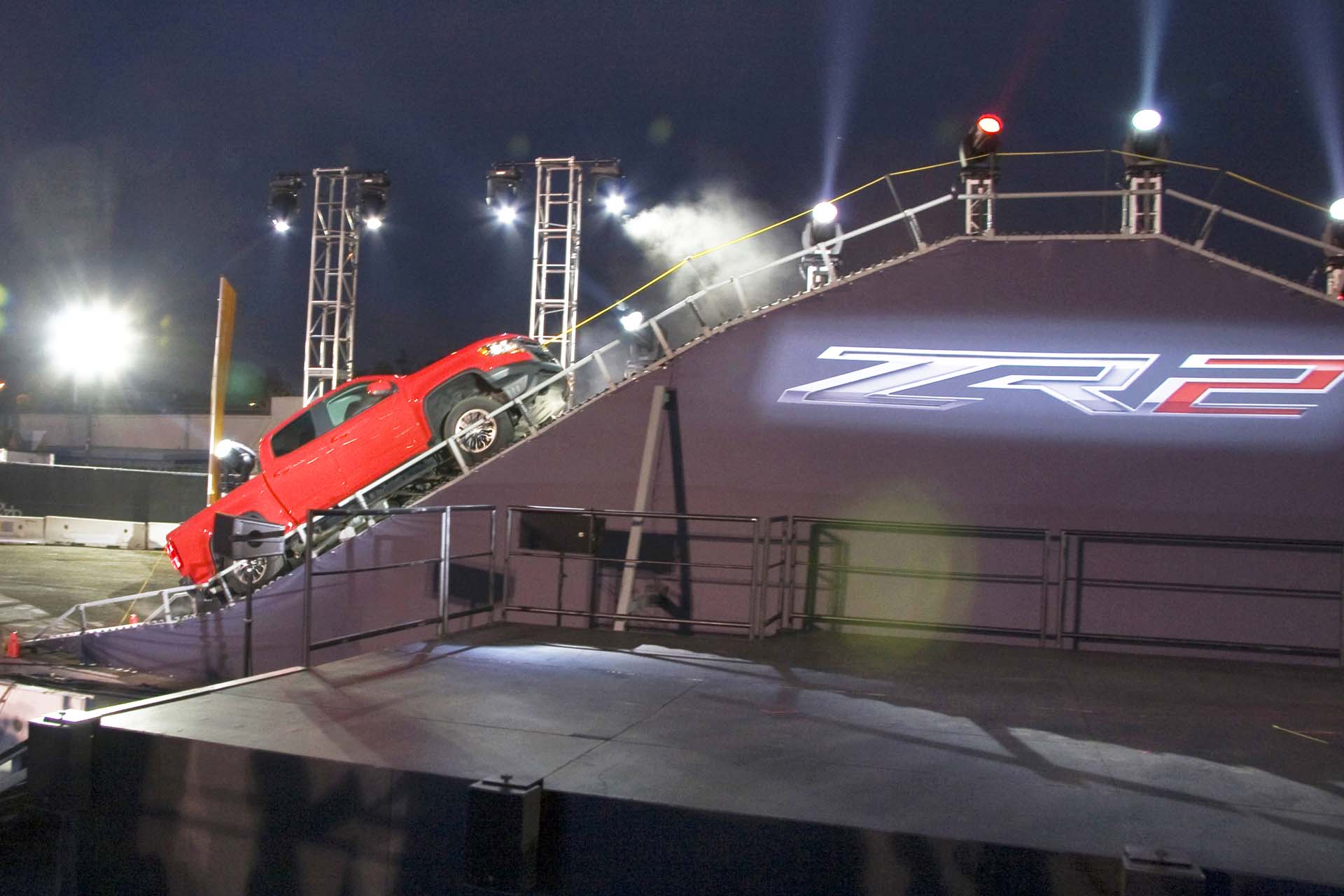 On a steeply banked ramp, with 4-Lo engaged, we’re basically on two wheels but there’s no creaking or groaning to be heard.

“With a very rigid frame, you have great articulation,” said Klein. “You don’t have to have your truck making all kinds of crazy noises.”

The steel climbing track rose to a 30 percent grade, with deep, 8-inch buckets to make it even more challenging. We can see the LA skyline while we were climbing to its apex. There’s no hesitation even at the steepest point before the summit. “That’s what that front locker gives you – confidence,” said Klein. “It doesn’t have to spin the wheels, figuring out what it’s going to do; it just pulls itself up.”

The ZR2’s smaller size gives it an advantage in heavily wooded areas, since it’s a foot narrower and 500 lb lighter than a full-size truck.

“We took it to Michigan and Tennessee and Indiana – we were on trails that were really meant for ATVs, and we took a truck on them.” 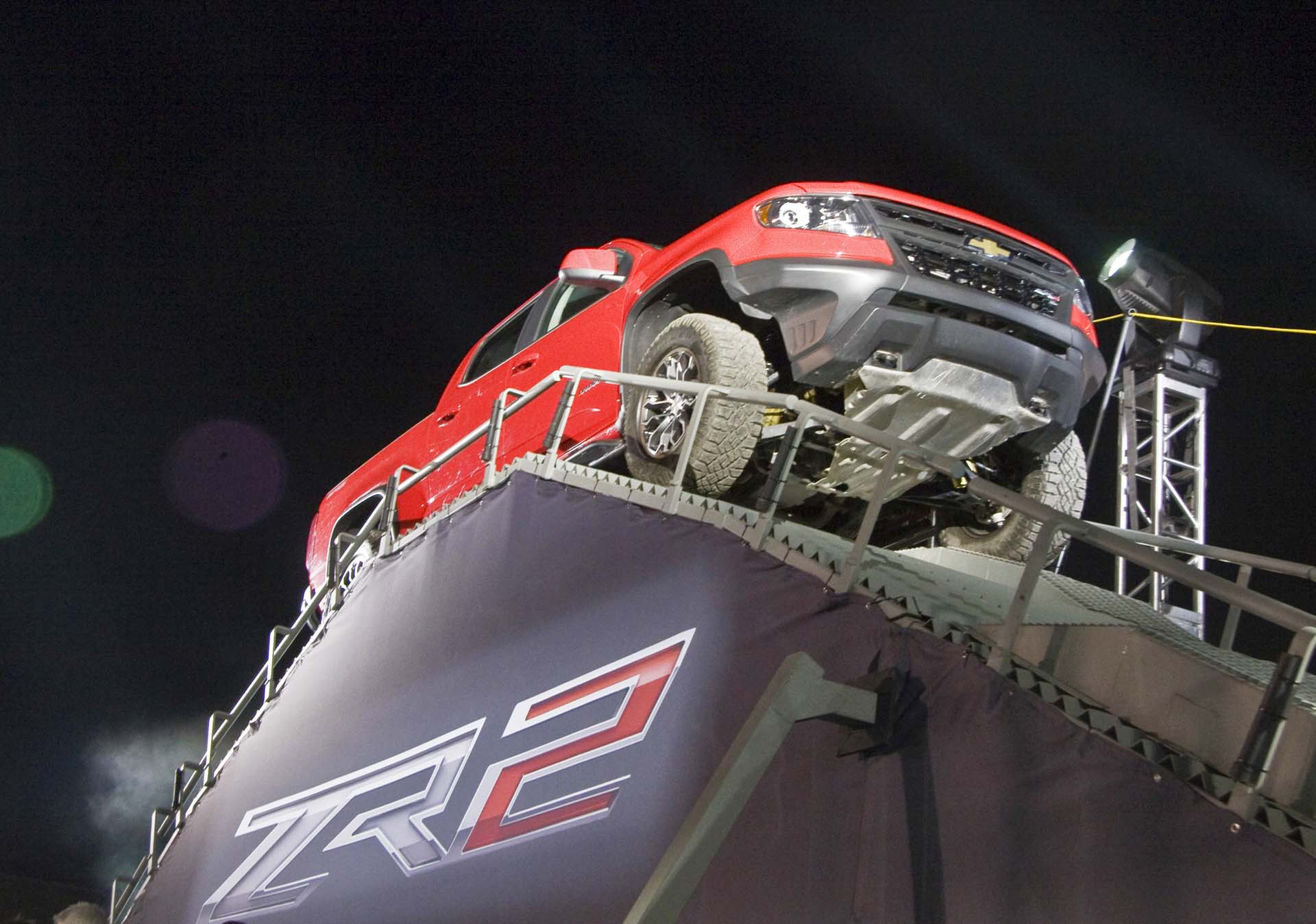 Even though it has been dramatically modified for off-road performance, the ZR2 has a 1,100 lb payload, and is able to tow up to 5,000 lb – which makes it great for ATVs, campers or trailers.

Is it safe to say that with the ZR2, they’ve got the Toyota Tacoma TRD Pro in their crosshairs?

“You can write whatever you like,” Klein laughs, “I’m only here to talk about the ZR2.”

The ZR2 is a key part of GM’s three-truck strategy to take control of the domestic pickup segment. That particular juggernaut shows no signs of slowing down, with automakers ploughing billions into development and production over the next few years.

In fact, the demand far outstrips the supply of available light trucks.

“We have one of the lowest base supplies in the business,” said Alan Batey, President GM North America. “We could sell more if we had more.” Thanks to the recent labour agreements, GM has promised to increase production of their pickup truck lineup in Canada.

“In less than three years, we’ve redesigned our Silverado, our Heavy Duty, and launched an all-new Colorado. This three-truck portfolio has made our company the industry leader in pickup truck sales in 2015 [in the US].”

Adding a new mid-size (Chevrolet Colorado, GMC Canyon) to their light- and heavy-duty pickup portfolio, when combined with full-size SUV sales, has increased their market share to 40.8 percent from 35 percent in 2013, but in outright sales the Ford F-150 is still the single-model king of the hill.

According to Batey, GM is on track to sell more than 900,000 pickups in the U.S. alone next year.

Until recently, the heavy-duty pickup wars were a two-truck battle between Ram and Ford, with each firing salvos of ever-increasing torque and towing numbers. GM had been on the sidelines during this numbers one-upmanship, until the introduction of their 6.6L Duramax diesel. Its 455 hp and 910 lb-ft of torque makes the heavy-duty Silverado a strong contender in Brobdingnagian battle of the pickup titans.

The Colorado has been a gratifying success for GM, exceeding sales expectations, despite predictions that it was a vehicle that no one wanted, in a segment that had hovered near death for a decade.

“In many ways, the Colorado is the hit that no one saw coming – not Ford, not Ram, and definitely not the Japanese. Some of you questioned our strategy. The mid-size segment was dead, you said. And you also said it would cannibalize sales of our full-size trucks. 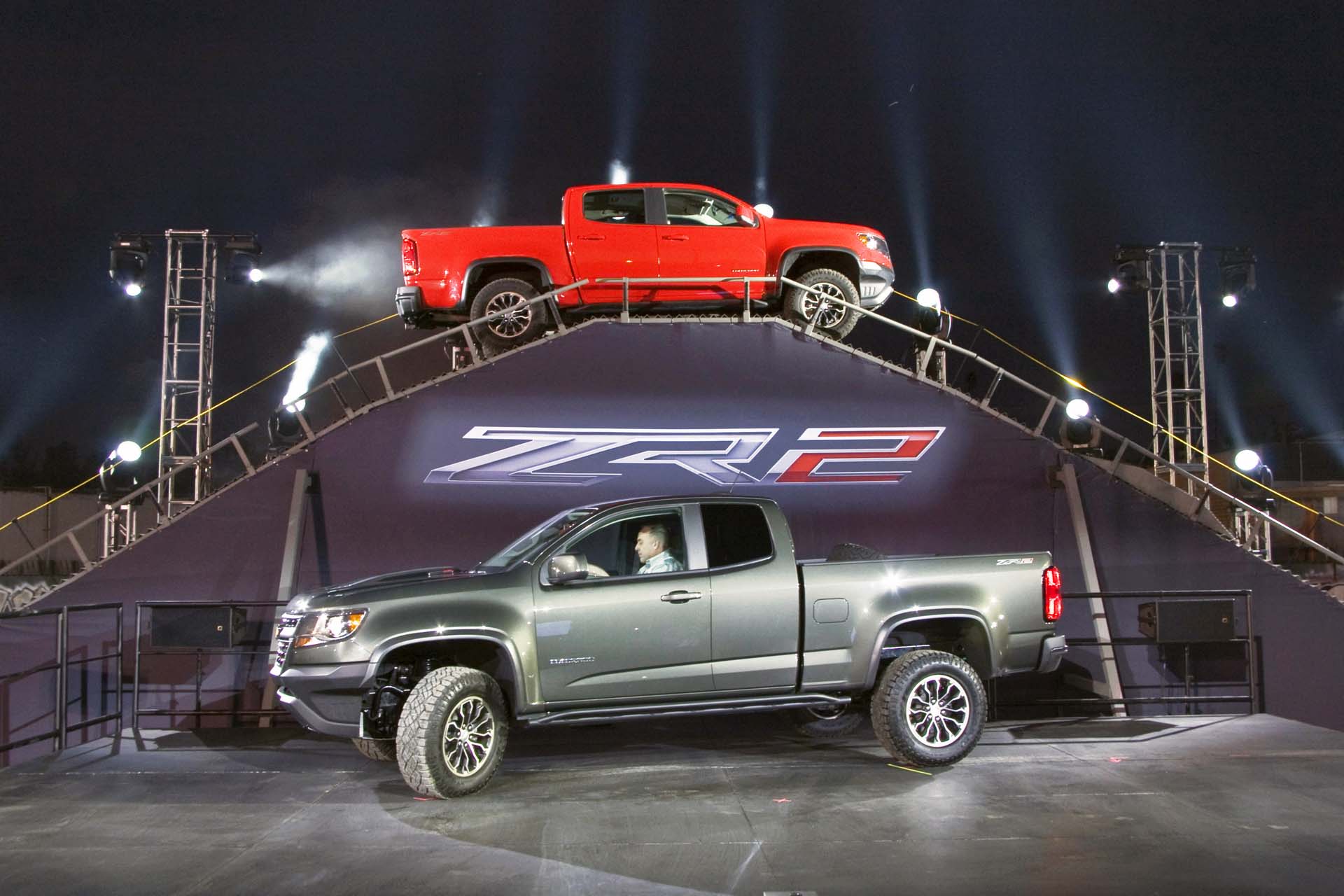 “I’m pleased to announce that you were wrong.”

“Significantly more than 50 percent of Colorado retail sales are to conquest customers new to the Chevy brand. This is second only to Volt for bringing new customers to Chevy.

Many of those traded in were right here in Los Angeles, which is the largest pickup truck market in the US.

“We’re not letting up,” he said. “We’re continuing to introduce new features to the Colorado, including the class-exclusive diesel engine, the class-exclusive eight-speed engine, an all-new V6 for the 2017 model year, and special editions like Shoreline and Midnight.”

With the surprise reveal of the Colorado ZR2 just prior to the LA Auto Show, GM can now add class-leading off-road capability to the Colorado’s list of exclusives.