No one involved in developing the original military-spec 1941 Willys Jeep MB could have predicted the Jeep brand would eventually be instrumental in changing the face of the auto industry.

That rudimentary vehicle was little more than a frame with wheels, built for a very specific and important purpose, but it marked the creation of a brand that has attracted one of the most loyal followings of any auto manufacturer.

Jeep may have become well-known thanks to its prominence during World War II, but it wasn't until the 1980s that it found a way into the mainstream automotive marketplace. The 1984 Jeep Cherokee was the first SUV to attract buyers in large numbers, and you could argue it was the first crossover utility, thanks to a unibody construction that set it apart from all 4WD vehicles that came before it.

Chrysler bought the Jeep brand from American Motors Corporation (AMC) in the late 1980s, after AMC had already begun work on the vehicle intended to be the next-generation Cherokee. But with the original Cherokee still selling well, Chrysler executives made what turned out to be a prescient decision: to go ahead with the new design, but keep building the older Cherokee model as well, and position the new version as a step up.

According to Chrysler enthusiast site Allpar.com, this was good news for Jeep's dealers, who wanted an upscale model to attract buyers who might have otherwise wound up in a Land Rover showroom. 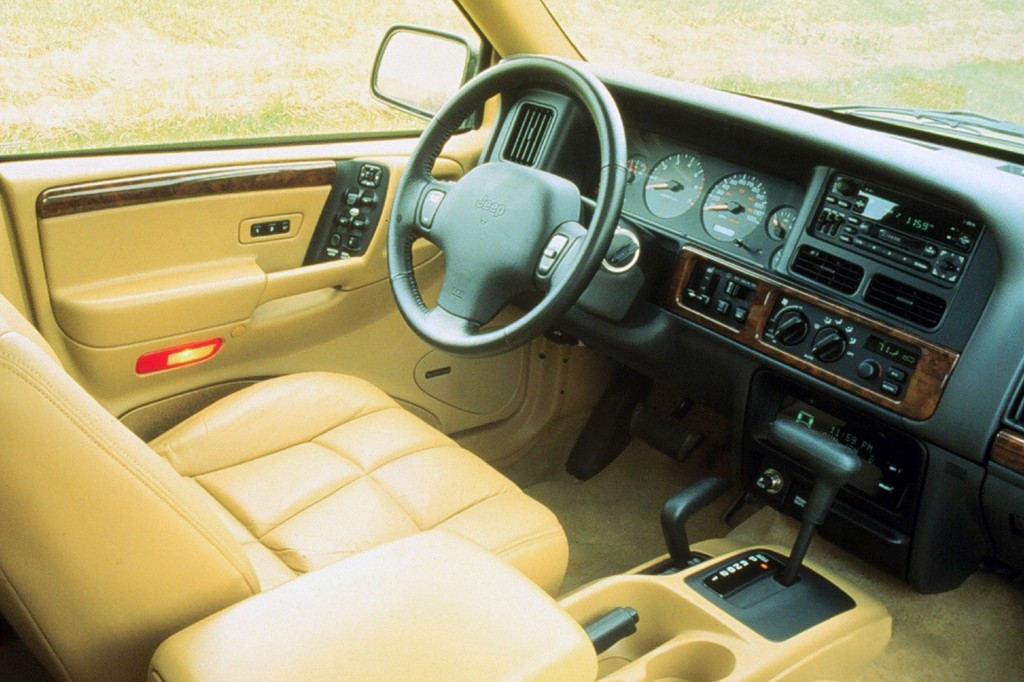 That new Jeep SUV would become the first-ever Grand Cherokee, which made a dramatic debut at the Detroit auto show in January 1992 by crashing onto the stage through a huge pane of glass. Chrysler may not have known it at the time, but the Grand Cherokee may also have broken through a psychological barrier that had previously kept pricey upscale SUVs, like those made by Britain's Land Rover, out of the mainstream.

Never mind Land Rover: the Grand Cherokee became even more important to Jeep and its Chrysler parent with the 1991 introduction of the Ford Explorer, a vehicle that would symbolize the rise of the mainstream SUV even more definitively than the Cherokee. Explorer's body-on-frame construction was less advanced than Jeep's unibody approach, but the Ford nonetheless offered a level of refinement the original Cherokee couldn't match.

In 2016, the Jeep brand is celebrating the 75th anniversary of that first bare-bones Willys and the brand it created. Meanwhile, in the 23 years since its bold introduction, the Grand Cherokee has undergone its own evolution into a premium vehicle that rubs shoulders with some of the world's most desirable SUV models.

It's easy to see how the original Grand Cherokee's design could have been a follow-up to the Cherokee. New flush-mounted headlights framed a seven-slot grille, already a well-established Jeep design cue.

Evolution or not, the Grand Cherokee was a good-looking car. It wore softer styling that looked at home on a chassis that was eight inches longer overall, riding a wheelbase 4.5 inches longer than the Cherokee's. 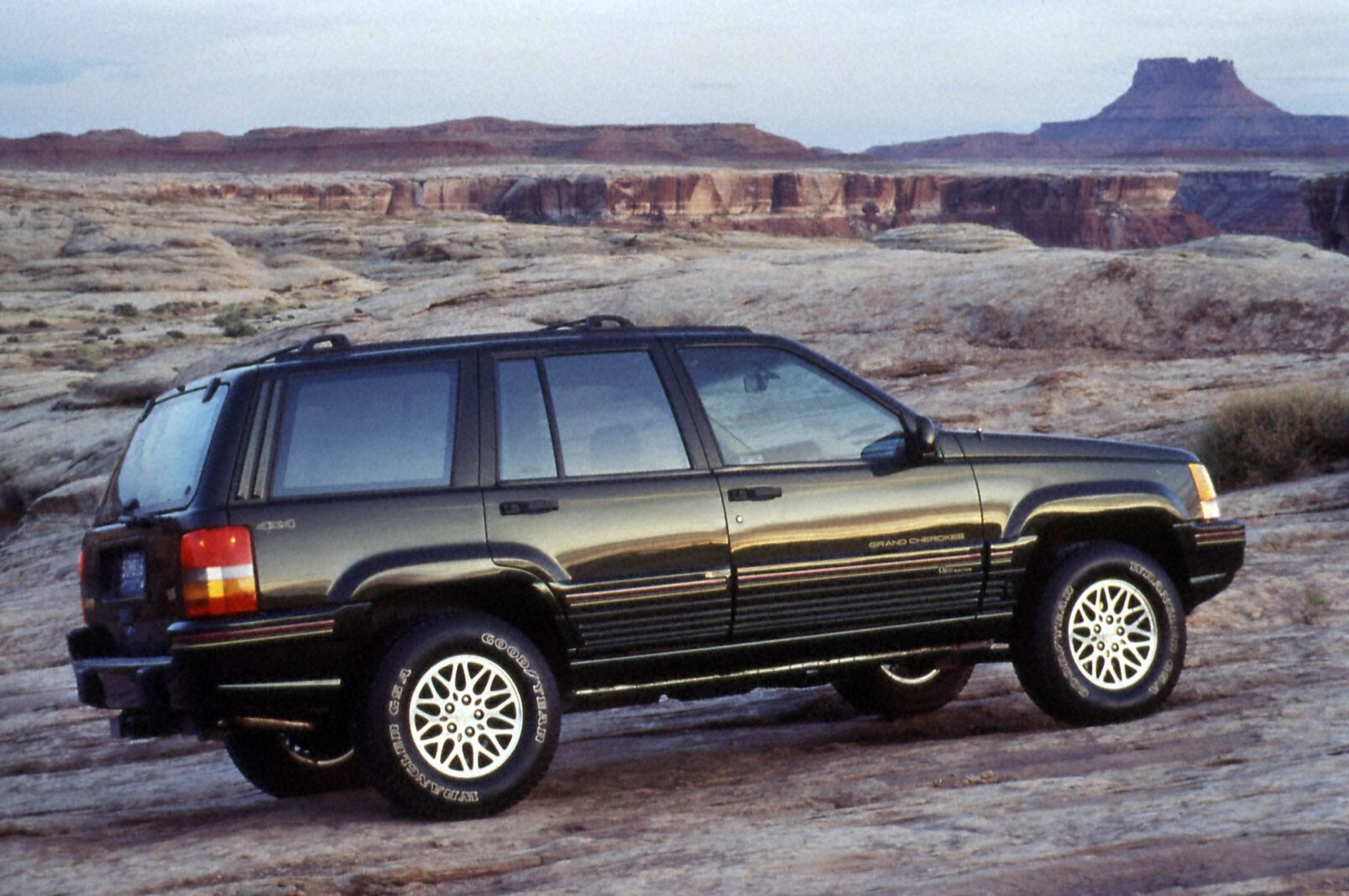 Under the hood, the Grand Cherokee skipped the four-cylinder engine used in the Cherokee and went straight for a 4.0L inline six-cylinder (a Cherokee option) that made 190 hp and 225 lb-ft of torque. Later in 1992, the Grand Cherokee got its own optional power-up in a 5.2L V8 good for 225 hp and 280 lb-ft of torque. Perhaps more importantly, that engine raised this SUV's towing capacity from 5,000 lb to 6,500.

And in case you think the move away from manual transmissions is a new trend, the Grand Cherokee was offered with one only in 1994 and 1995. All versions since have come exclusively with automatics.

In keeping with the brand's reputation for off-road readiness, Jeep offered its new upscale model with a choice of three different 4WD systems. Recognizing that some buyers would never venture off-road, a rear-wheel-drive option was added not long after the Grand Cherokee's introduction, but as far as we can tell, that was limited to the US market.

The next big changes came in 1996, with a six-cylinder engine retuned for more torque and upgraded 4WD systems. Inside, steering-wheel-mounted stereo controls and heated, power-adjustable front seats were optional, and driver and front passenger airbags became standard.

In 1997, the Grand Cherokee added more sound deadening for a quieter interior. The following year, Jeep heralded the final year for this first-generation model with a new top-trim model called the 5.9 Limited. It was based around a new optional 5.9L V8 that made 245 hp and 345 lb-ft of torque that Allpar.com says made the Grand Cherokee the fastest SUV in the world for 1998. 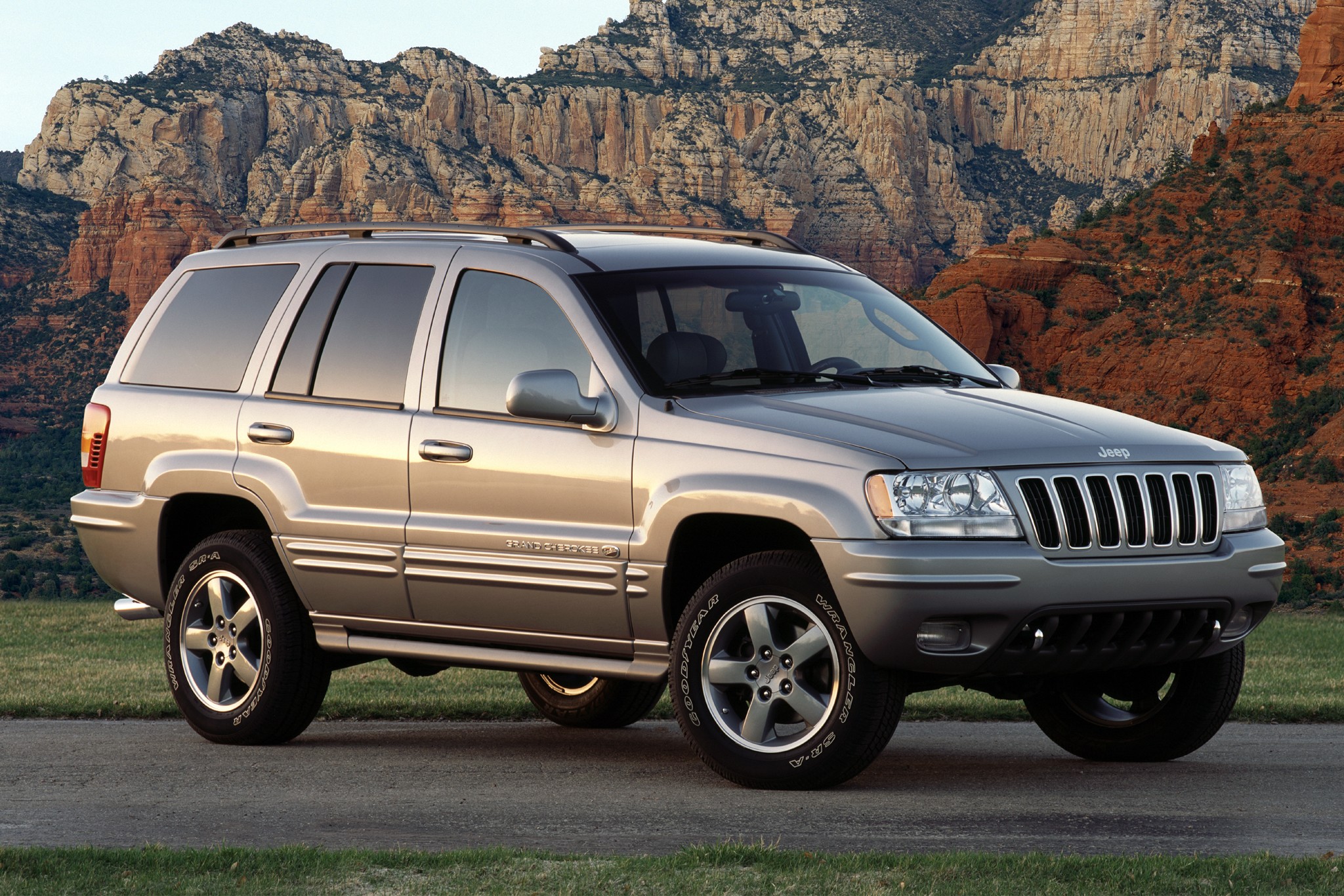 The original Grand Cherokee went out on a high note, sales-wise, and Jeep was not in a hurry to fix something that was obviously not broken, based on the model's big sales numbers; a second-generation model debuted in 1999 wearing gently updated styling.

While Jeep was criticized for not upgrading the Grand Cherokee's solid front axle to an independent suspension setup, updates nonetheless improved cornering and steering feel.

More significant changes included a new 4.7L V8, and buyers who opted for it also got a new four-speed automatic transmission notable for having two second-gear ratios: one for upshifts from first, and a more aggressive ratio used to improve acceleration in downshifts from third. 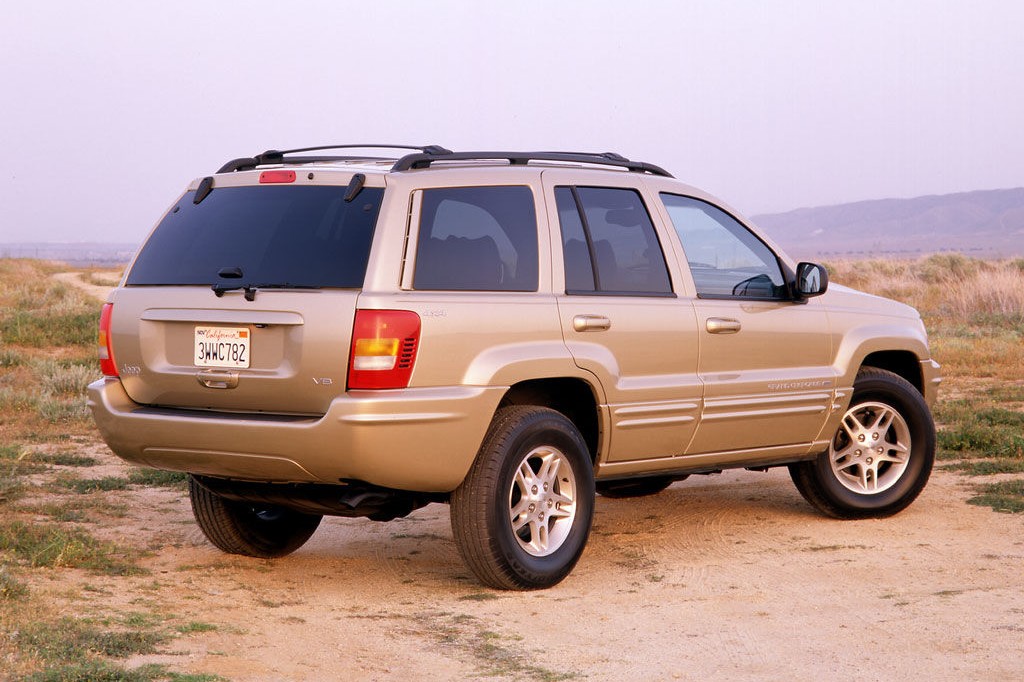 In 2001, a true five-speed automatic transmission became standard in V8 models, though it once again had alternate second-gear ratios.

The 2002 model year added a more luxurious Overland trim in the US that came standard with the V8 engine, the Grand Cherokee's most capable 4WD system (Quadra-Drive), and upgraded suspension. Inside, Overland models got wood trim, power-adjustable pedals and rain-sensing wipers, and Jeep enhanced the Grand Cherokee's safety with side curtain airbags and optional tire pressure monitoring. 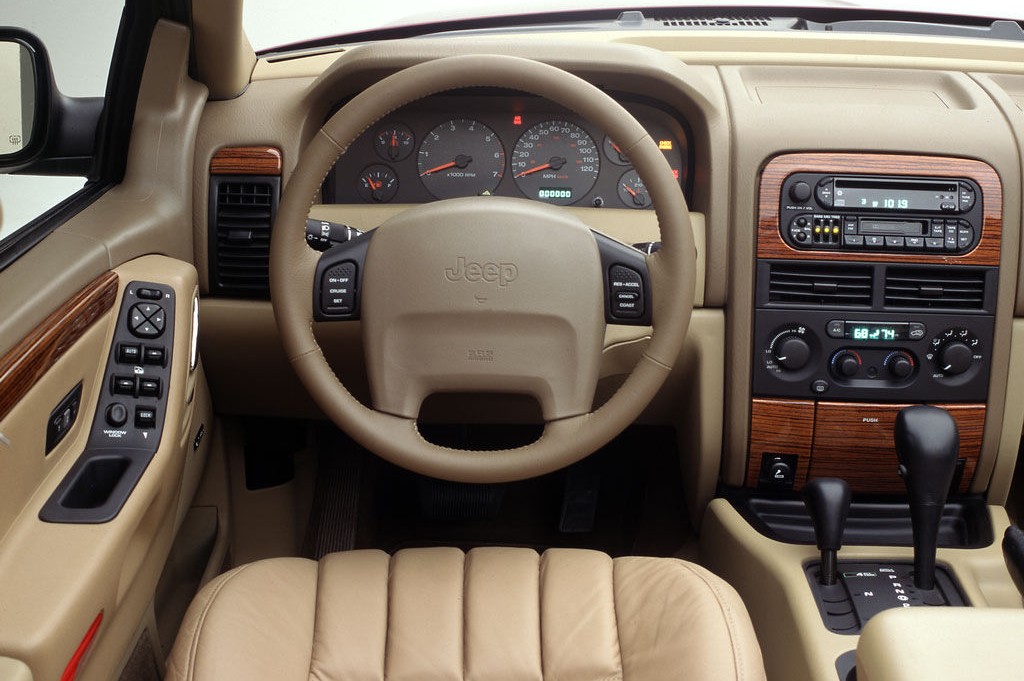 In 2001, the Grand Cherokee was among the top ten choices in a Canadian Automobile Association (CAA) survey that asked its members, "What is the vehicle of your dreams?"

Allpar.com says Jeep sold more than 207,000 Grand Cherokees in the US in 2003, compared to the roughly 30,000 Mercedes-Benz M-Class SUVs that found American homes that year, a statistic that foreshadowed what was to come for the third-generation of Jeep's upscale SUV. 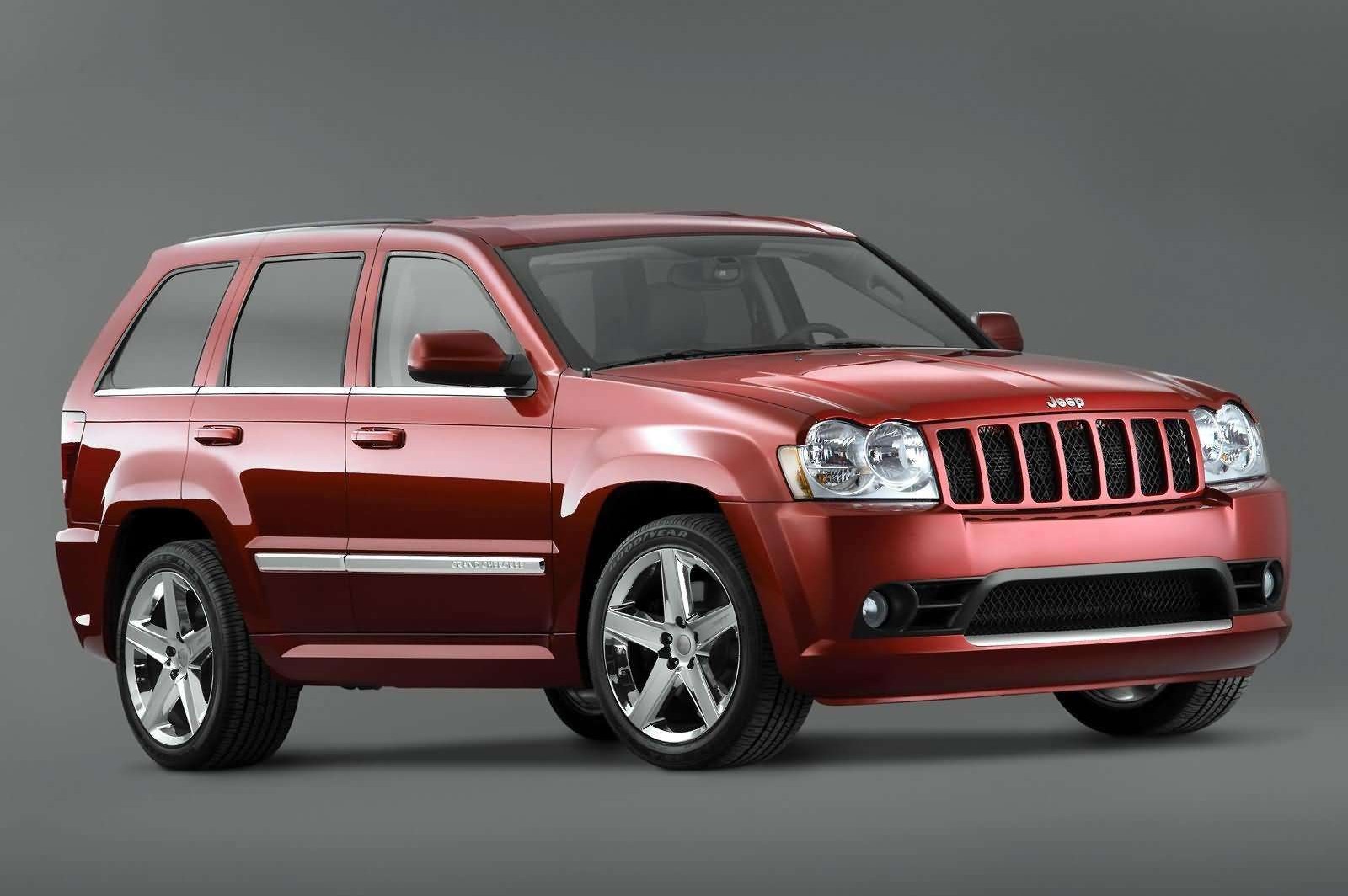 In 1998, while the first-generation Grand Cherokee was busy winning over North American car buyers by the thousands, Mercedes-Benz bought a majority stake in Chrysler, creating DaimlerChrysler.

That merger (or takeover, as critics called it) resulted in a number of Chrysler and Mercedes-Benz models sharing chassis and drivetrain components, including the Grand Cherokee.

Allpar.com says the Benz tie-up resulted in the first all-new Grand Cherokee since the original and the best crash safety ratings yet, but naysayers noted a less-engaging driving feel that came despite a new independent front suspension. Other demerits included a cheap-looking interior and "arguably lower off-road capability." 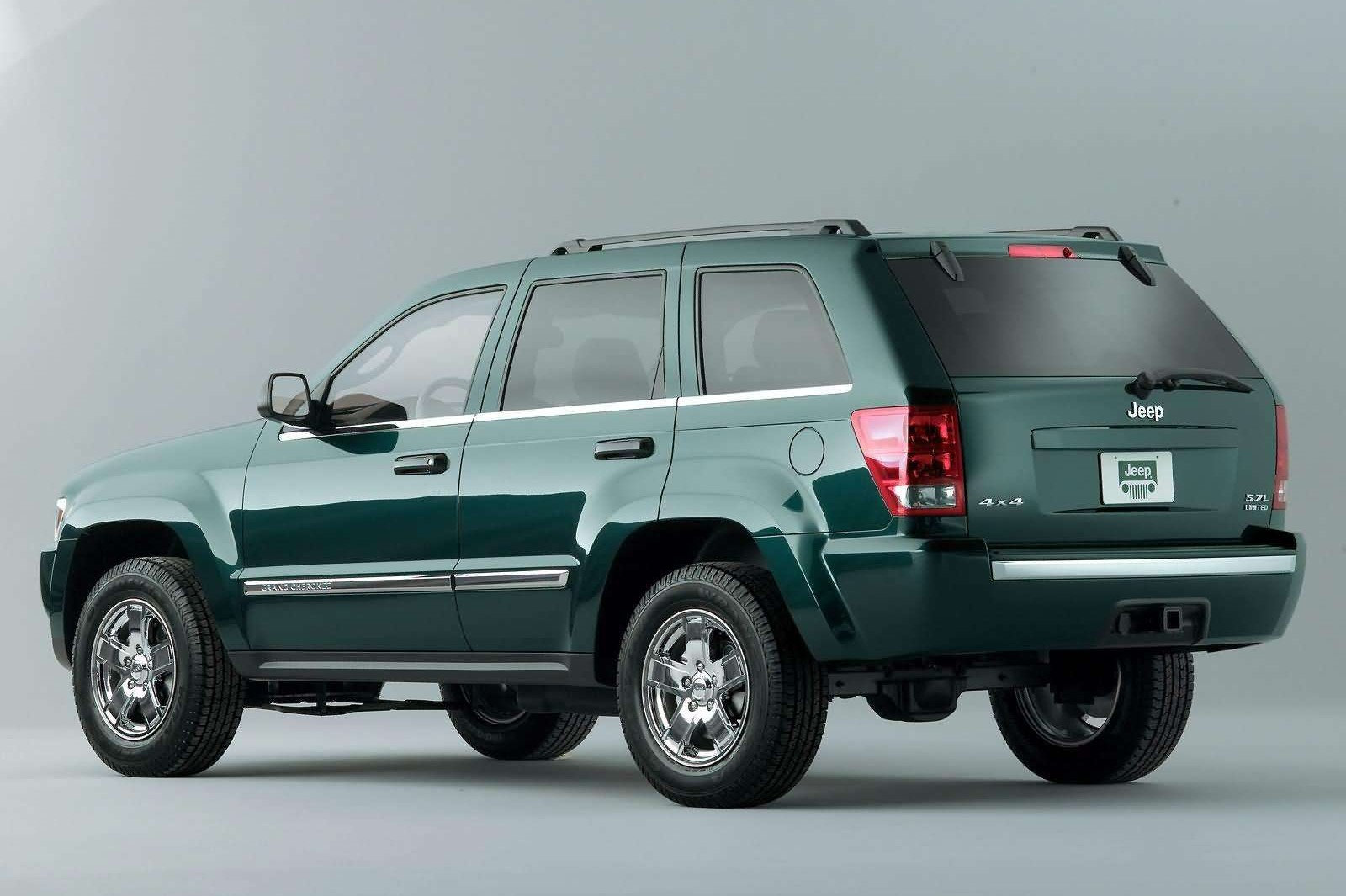 If the latest Grand Cherokee was less satisfying to drive, there was more choice under the hood. The 4.0L inline-six was gone, replaced by a 3.7L V6 that made 210 hp and 235 lb-ft of torque, and the first appearance of the now-ubiquitous 5.7L Hemi V8 which, at the time, generated 325 hp and 370 lb-ft. The 4.7L V8 returned, with 235 hp and 305 lb-ft. Five-speed transmissions were standard across the board.

Things got fast with the 2006 introduction of the Grand Cherokee SRT8, powered by a 6.1L Hemi with 420 hp and 420 lb-ft of torque. That was enough power to make the Grand Cherokee a legitimate competitor for high-performance European utilities – including, ironically, the Mercedes-Benz ML 63 AMG. 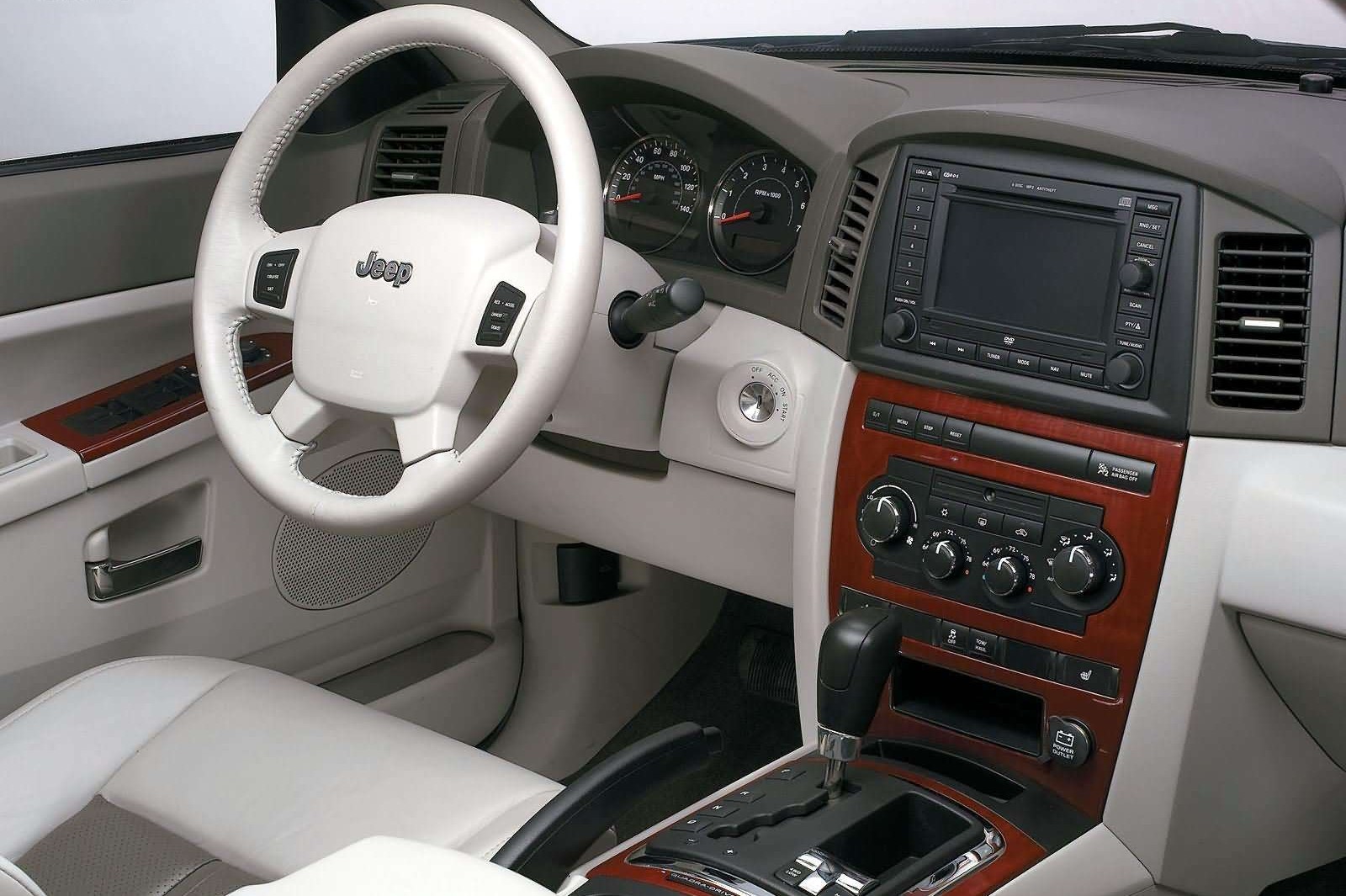 In 2007, the first tangible fruit of Jeep's German ownership came in the form of a Mercedes turbo-diesel V6 engine offered in high-end Limited and, for the first time in Canada, Overland trims. It made a modest 215 hp, but out-torqued even the Hemi V8 with 376 lb-ft.

The Grand Cherokee got refreshed styling in 2008, along with new available luxury features, like heated rear seats and auto-levelling HID headlights. Functional upgrades included trailer sway control and hill-start and hill-descent control, and the 4.7L V8's power gained 70 hp and 29 lb-ft of torque, for 305 hp and 334 lb-ft total.

Big news for 2009 included a redesigned, more-powerful 5.7L V8 good for 357 hp and 389 lb-ft, which became more widely available in 2010 as Jeep began to wind down the third-generation model and eliminated the 4.7L engine. 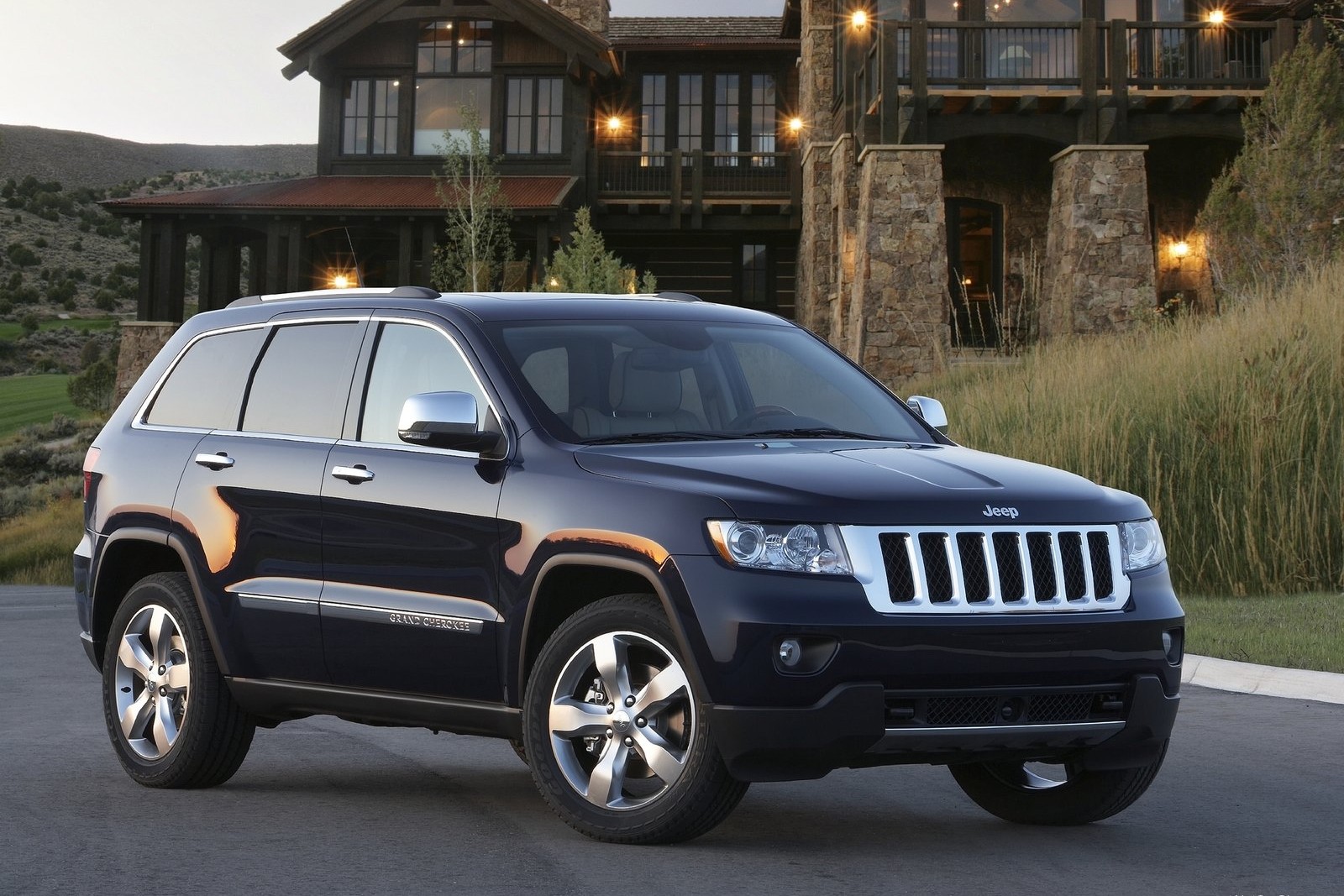 In 2007, Mercedes-Benz sold most of its stake in Chrysler to an equity firm, setting up the American automaker as a (mostly) independent entity once again. But any celebrating in Chrysler's boardrooms was short-lived: the recession of the late 2000s forced Chrysler to declare bankruptcy.

It weathered the economic storm thanks to a big loan from the American government, and emerged as the newly named Chrysler Group, of which Italian automaker Fiat owned a 20 percent stake.

Allpar.com says the all-new 2011 Jeep Grand Cherokee was the first redesigned vehicle launched by the "new" Chrysler, and if there was any doubt the company had landed on its feet, this new SUV erased it. 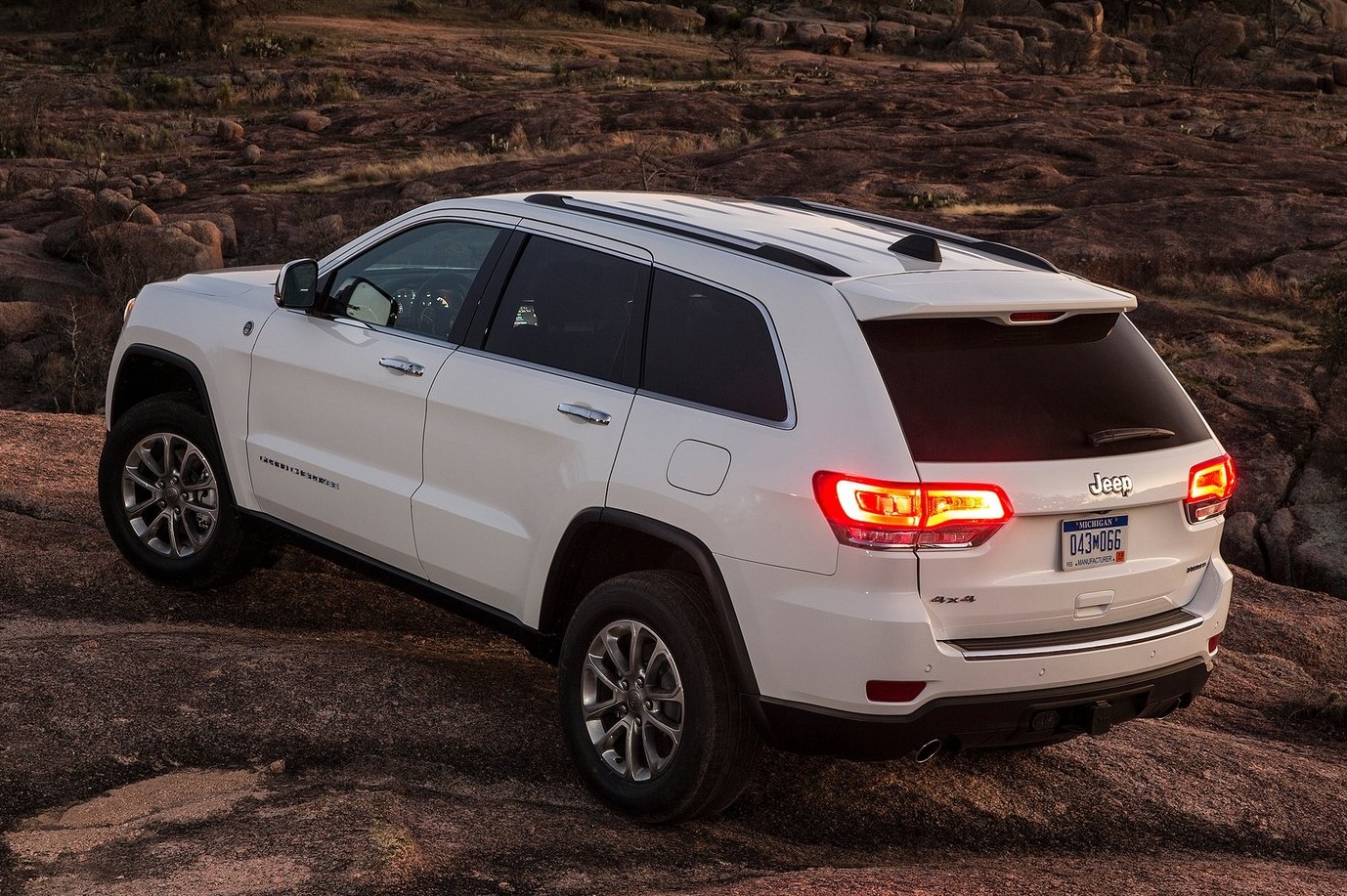 The Detroit News named the new Grand Cherokee its Truck of the Year, Consumers Digest called it a best buy for 2011, and it nearly won SUV titles in both the Canadian and North American Car of the Year contests.

No wonder: a Grand Cherokee–first independent rear suspension improved the ride; a more efficient base engine (the 3.6 Pentastar V6) out-powered the last-generation's 4.7L V8; and an optional height-adjustable air suspension and terrain-select system allowed the driver to tailor the truck's performance to on- and off-road situations.

The SRT8 model took a year off, but returned in 2012 with a bigger 6.4L engine good for 470 hp and 465 lb-ft, putting the Grand Cherokee in the same performance arena as the Porsche Cayenne Turbo.

Also in 2012, the Hemi got a new six-speed automatic transmission. 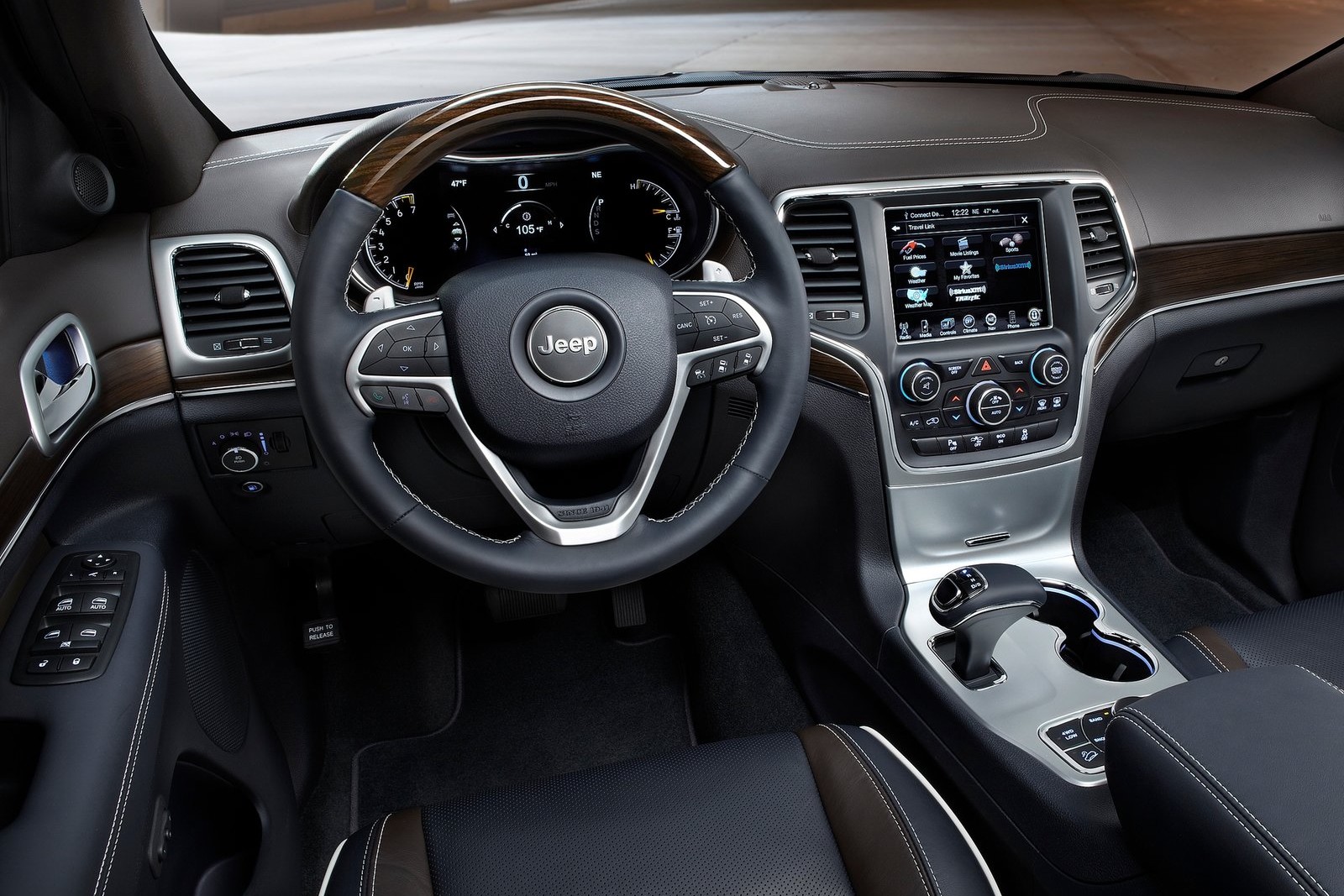 You may have noticed we haven't yet mentioned a diesel engine, and that's because the previous-generation's Mercedes turbo-diesel went away after the DaimlerChrysler breakup. But a new corporate partnership with Fiat, called Fiat Chrysler Automobiles, gave Jeep access to a new 3.0L turbo-diesel V6 called EcoDiesel. It made 240 hp and a big 420 lb-ft of torque, and with it, a 2014 Grand Cherokee could nearly achieve family sedan fuel economy.

Along with that new diesel, the 2014 model gained a new top trim, called Summit, and if the Grand Cherokee wasn't a legitimate luxury SUV before, it was now, with premium leather upholstery and open-pore wood trim, a suede headliner and 19-speaker stereo. Safety kit included steerable headlights, blind-spot monitoring, adaptive cruise control and forward collision warning.

From the past, into the future

Following its starring role in the Allies' victory in World War II, Jeep has survived numerous changes in ownership to get to where it is today. The lineup remains centred on the Wrangler, the spiritual successor to the Willys, but has expanded into entry-level territory with cars like the subcompact Renegade and a new interpretation of the compact Cherokee.

But the headliner of today's Jeep remains the Grand Cherokee, a vehicle that goes head-to-head with some of the world's most prestigious automakers – in a luxury SUV segment it created.