An Electric Mazda Miata in Canada

When a family friend tells you about his school buddy who’s been doing some pretty crazy work on his first-generation Mazda Miata, he gets your attention. When he mentions that said buddy has completely converted the car to a fully electric drive system, the writer instinct kicks in and you drive 600 kilometres to overwhelm a young college student with questions.

Michael DeVuyst is a twenty-something native of Virginia, freshly imported to Canada, and established right in the heart of Montreal suburbia, in Saint-Lambert. If you’re in the area and notice a red Mazda Miata zipping around, sounding more like a jet engine than any engine car you’ve ever heard, that’s probably him. The owner of the only electric MX-5 in Canada.

How do you wake up one morning with the desire to pretty much build your own electric car? His answer: with a documentary. You might have heard of it: Who Killed the Electric Car? And who indeed did? The 2006 documentary leads the discussion on how a series of factors would have contributed to the (temporary) disappearance of the electric car at large, and more specifically, of the mildly successful GM (Saturn) EV1 in the late 1990s. 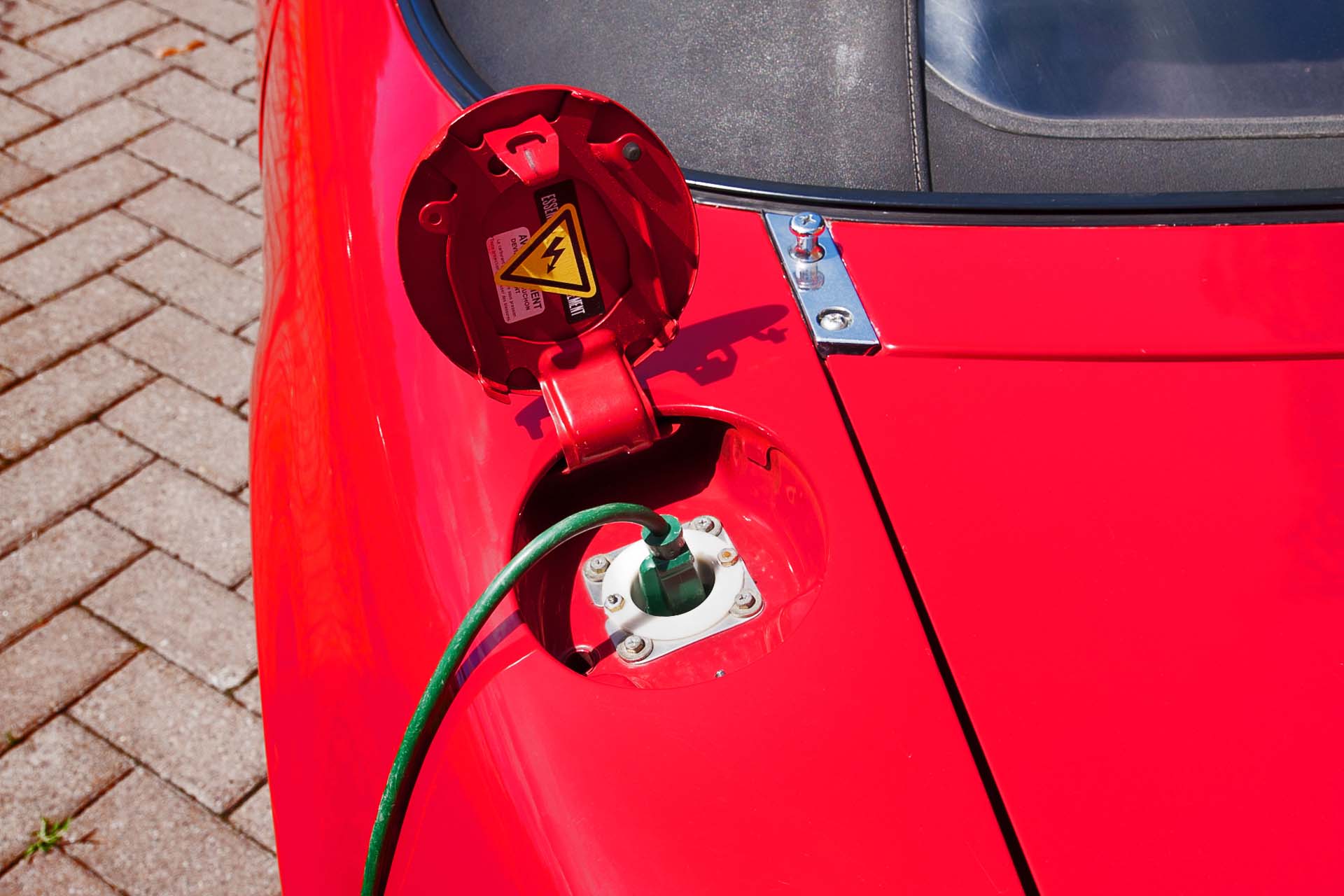 According to the interviews, there is not a single culprit: there are many, the very manufacturer of the EV1 being one of them. What stuck with Michael the most however, were the words of Alan Cocconi, founder of AC Propulsion, a company specializing in alternating current – or AC – electric engines. Cocconi explained that the lithium-ion batteries are the exact same batteries found in laptops and that they can easily be fitted (into the EV1). Easily? That meant "challenge accepted" for Michael. And with the sexy-looking and very electric Tesla Roadster brand-new to the market at the time, he had his mind set.

True enough, when I met with him, Michael was proudly sporting a Tesla sweater and the references to Musk’s electric adventure were numerous – including the AC engine envy he admitted to. He’s obviously a fan of the popular brand. Musk isn’t such a bad example to look up to.

Michael first needed a car. In 2010, he got his hands on a bright red 1990 first-gen Mazda Miata MX-5 while he was still living in the U.S, just south of Washington D.C. That’s where he started the conversion. The engine was one of the first things to go. After consideration, had that step been delayed, it could have saved the Miata – and his wallet – a 900 plus-kilometre trip on a trailer to the family’s new Quebec home. As they say, the only source of knowledge is experience. And he got plenty of it over the course of the following five years. When the work started, there was little to no formal documentation nor clear instructions describing the process of swapping engines. A then 18-year-old Michael turned to YouTube videos and looked at pictures of other conversions to get the ball rolling and gain the required knowledge to do what needed to be done. Supplies were mostly bought online from high-end and specialty suppliers such as EV Source – Canadian Tire just wouldn’t cut it. 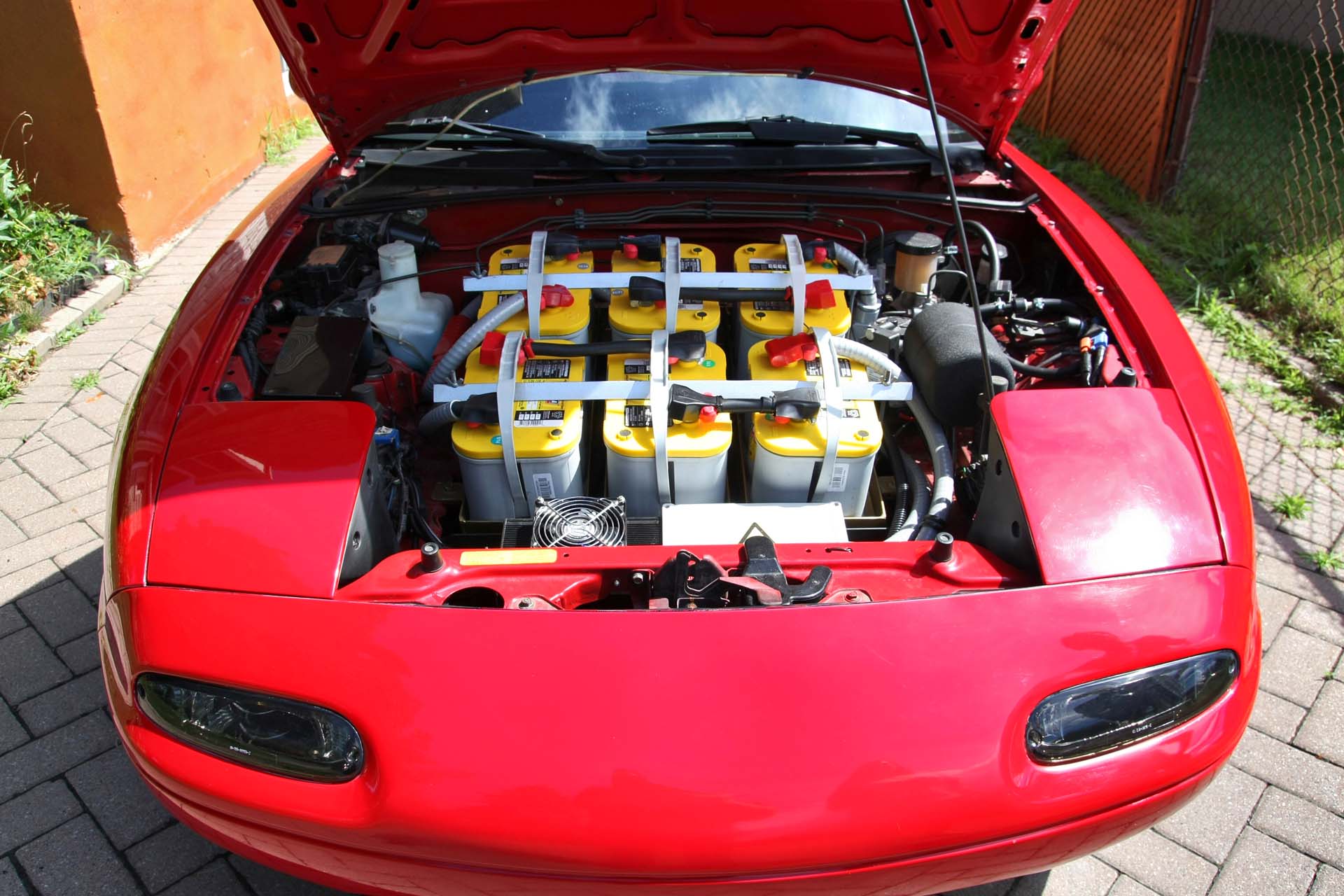 Most original components have remained to keep the car road-legal, including airbags, headlights and braking system. That is, besides the entire drive system. This electric Miata remains a front-engine, rear-wheel-drive sport coupe with its original instrument cluster and a little treat Michael is very pleased with: the manual transmission. This EV has a working clutch!

His idea was to keep the MX-5 looking as original as possible, changing very few aesthetic components, except for the closed off front grille for a concept similar to Tesla’s, and an electric inlet in place of the fuel cap. A total of twelve lead-acid batteries, the usual packs found under the hoods of gasoline-powered cars, are found at the front and in the trunk of the little sport coupe. The battery packs are wired in series and connected to a direct current, or DC motor. According to Michael’s estimation, the car has lost a bit of power, but has gained a whole lot of torque – a common advantage for EVs. A total of 144 volts propels the Miata with a range of about 35 kilometres. Michael also went in with upgrades in mind, using better and more capable parts such as four-gauge wiring, ready to receive a more powerful engine in the future.

He is hoping to eventually see an AC motor and lithium-ion batteries installed under the hood of his little ride which will improve the range and make the car lighter, considering the battery packs added 200 pounds to the original weight. After over $9,000 worth of parts, materials and upgrades, this MX-5 works great the way it does. For now. 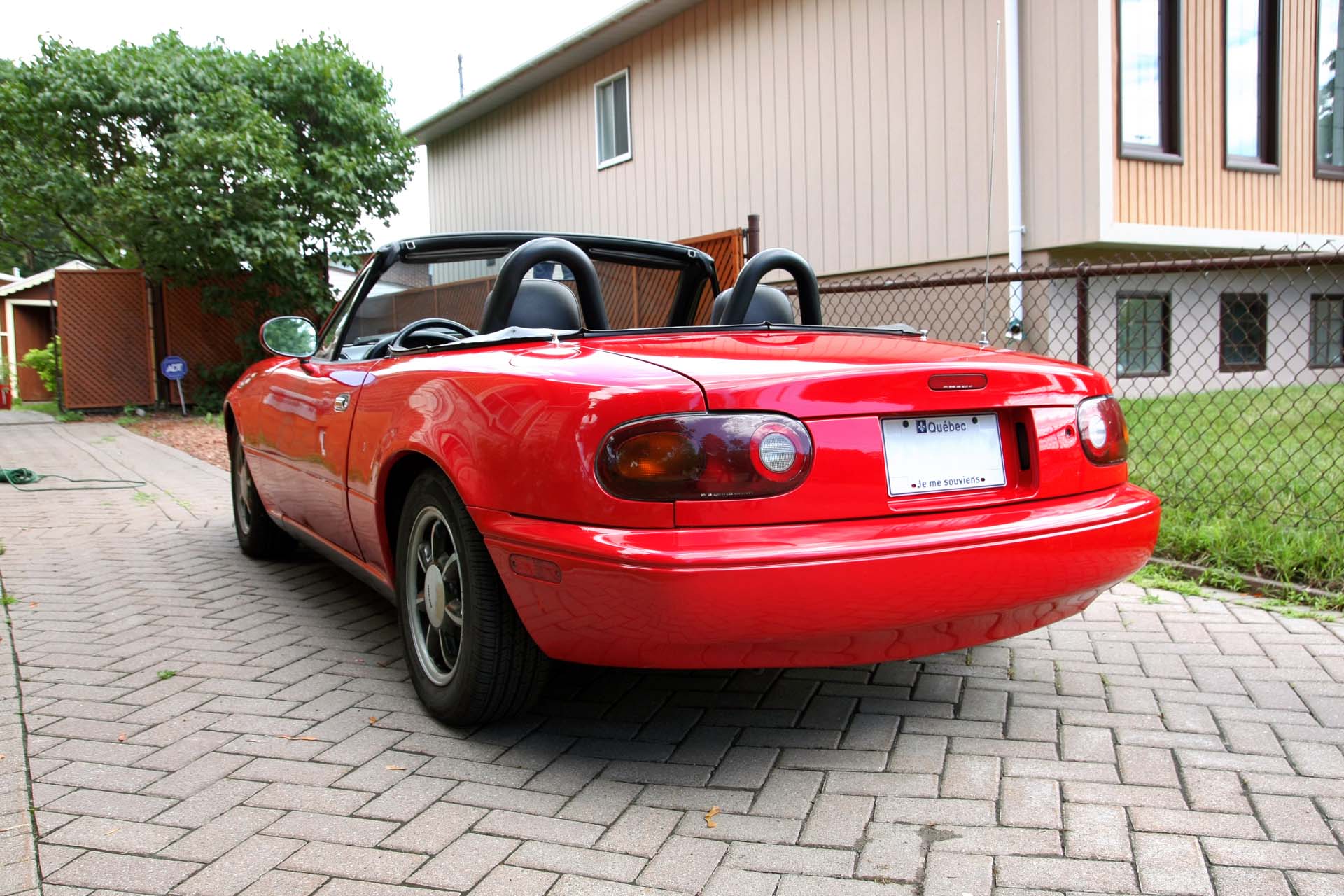 The best has obviously been going for a ride. A strange thing to experience as you navigate through the streets of Saint-Lambert, sitting on what sounds like a turbine, with the wind in your hair. Stranger yet are the manual gear changes without the usual engine revving, a thing the owner seems to thoroughly enjoy as he presses his homemade EV on the Taschereau Boulevard. The sound of his car has the same effect on him a V8 has on me: shivers of excitement. When I asked him if he could guesstimate the amount of hours he has invested in this project, Michael’s answer was, “You mean years?” I guess dedication cannot be calculated with numbers.

Now imagine if the EV1 hadn’t been discontinued and destroyed, and that already at the end of the 90s, EVs roamed freely among the gasoline-powered vehicles. Where would the technology be now? And how would Michael’s Miata have turned out? This aircraft mechanic-in-training has made his own electric car, combining all the awesomeness of a Miata with the benefits of a zero-emissions vehicle; exactly as he wanted.

What have you accomplished in the last quarter of a century? My personal answer: nothing nearly as cool.