Husband vs Wife in a Nissan Micra Cup Racecar

Motorsport is what brought my wife and I together. So I suppose it’s only fair that motorsport tear us apart, right?

I was joking. Well, half-joking. Both my wife and I are fiercely competitive; the notion that one of us is faster than the other is one we’ve been careful never to approach lest it end in tears and lawyers.

So when Nissan said, “Hey, why don’t we put you guys through an evaluation in our Nissan Micra Cup cars?” we were both hesitant.

We met back when I was a motorsport journalist; she still is one. I’ve got a reputation for being a bit ragged. Some say exuberant, aggressive, boisterous. Steph is known for being smooth, precise and considered. These attributes carry over to our driving styles. 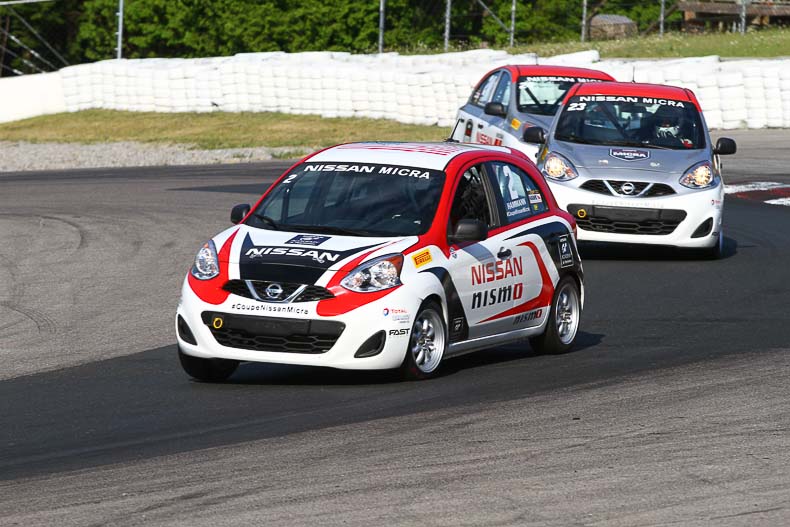 The Micra Cup is an Ontario- and Quebec-based series for largely stock Nissan Micras. The cars have some suspension upgrades (basically the components from the Japan-only Nissan Versa NISMO), a race exhaust, a roll-cage from Motorsports in Action in St-Eustache, race seat, motorsport data logger and not much else.

They’re a barrel of fun to watch with over 20 of the screaming hamsters side-by-side and full-tilt over an 8-round, 16-race calendar on some of Canada’s coolest race tracks.

Nissan wisely thought better of pitting Stephanie and I against a full field in a “real” race. Instead, they put us in with race instructor Jeff McKague. Officially he was there just to help guide us around the Canadian Tire Motorsport Park (nee Mosport) Driver Development Track, but I overheard the Nissan PR rep tell him, “Make sure Jacob doesn’t go too crazy.”

I don’t know what she was worried about. In a full season of racing, none of the stock engines have so much as blown a gasket – and most drivers from last year’s inaugural season are back this year in the same $20,000 racecar. Apart from crashing, and regular maintenance of consumables, there’s not a lot that breaks on these. As a result, a full season would set you back around $30,000 – pretty cheap in racing terms. 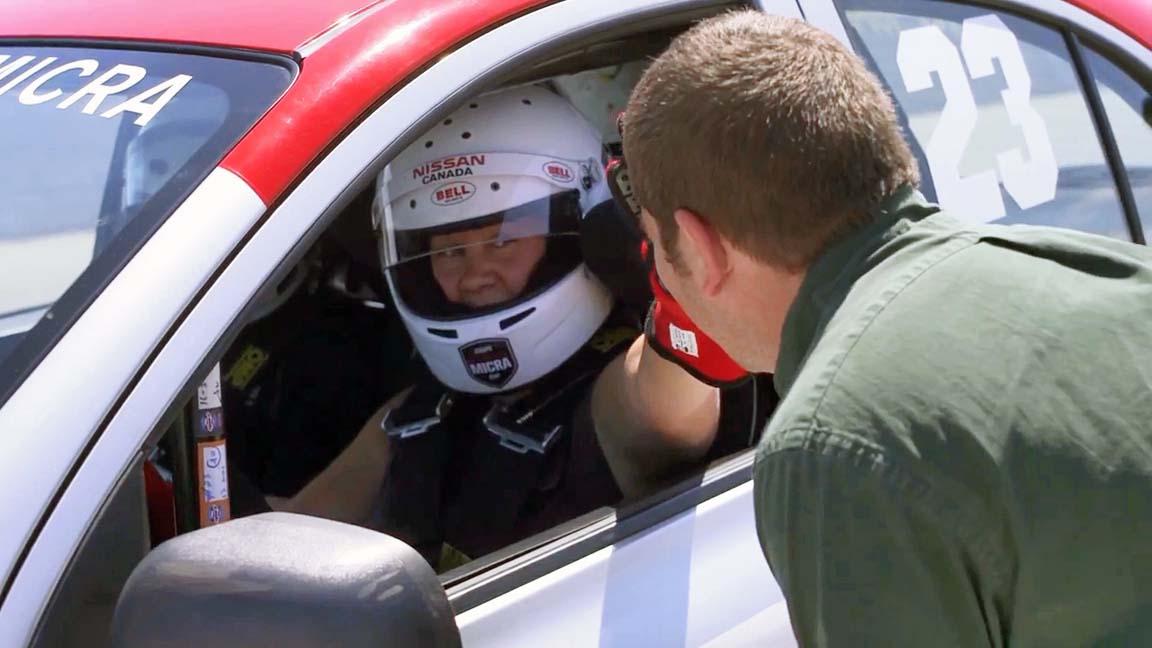 The Micra itself is an interesting race car, with plenty of body roll, pitch and dive to make you feel like you’re going a million miles an hour. The FAST wheels with Pirelli rubber offer frankly much more grip than this car needs and the NISMO suspension soaks up curbs with ease. Bicycling through one corner gave poor Jeff a momentary scare (the video below captures it well) and the Micra responds quickly to wheel inputs. The inside front is liable to spin up in some on-throttle corners and the tires scream their protestation to the heavens pretty much constantly. Yet the little Micra rewards smoothness and there’s a fine line between aggression and over-driving.

Jeff tells me I’m being too slow to get back on the throttle at the bottom of the course, which is hurting me up the longest straight, so I fix that for the next lap. I’m feeling good but I’ve caught two slower cars before I can really put in my best possible lap – no matter though, we’re not being timed (officially), Jeff is giving us his knowledgeable assessment.

Side note: After this epic battle of the spouses Nissan put us both in the passenger seat with reigning champion Olivier Bedard and challenger Stefan Rzadzinski at the wheel. We were promptly humbled by these pros who showed us around at hilarious speeds, battling with each other the entire time.

Fortunately, the belly-shaking laughter and adrenaline produced in that ride was enough to settle the tension… and probably save our marriage.