It all started, as so many business ideas have, with a long dinner and a scribble on a napkin. Paul Zimmer, president of Zimmer Corporation, drew his first sketch of his inspiration for a neo-classic car and handed it to his son Bob. Zimmer was already making mobile homes, conversion vans, and yachts, and Zimmer had seen the success companies like Excalibur were enjoying building nostalgia or neo-classic cars. At the time, there were a surprisingly large number of companies making cars that had the appearance of the long hood classic coach-built cars of the 1920s. Most featured a long nose, short rear deck, wire wheels, visible exhaust manifolds and were based around a then-current production model. They were popular with athletes, movie stars, singers, and anyone who wanted to be seen.

Launching in 1978, Zimmer's first car was the Mercury Cougar-based Golden Spirit. Mercury had discontinued the fourth generation Cougar by 1979, so Zimmer had decided the Mustang body made for a better base. In 1984 they launched a second model, the Fiero based Quicksilver. While the Quicksilver wouldn't have looked out of place in a Robocop movie, Zimmer kept making the classic inspired Golden Spirit alongside it. Production continued until 1988, when Paul Zimmer suffered a heart attack and the parent company went into bankruptcy. During that run, more than 1,500 Golden Spirits were made, which is a shocking number for what was a more than $60,000 car in 1985. $10,000 more than a Mercedes 560SEL at the time, and $50,000 more than the Mustang it was based on. The Golden Spirit even made appearances in shows like Miami Vice and Dallas.

In 1997, publisher Art Zimmer (no relation) bought the rights to the company after learning that there had been a car company that shared his name. He restarted it and began making neo-classic cars again beginning the next year. The company continues to make cars based on the current Mustang coupe or convertible. They also offer a last generation Town Car based model, even as a four-door convertible.

Zimmer added 107 cm (42-inches) to the wheelbase of the Mustang base car, all of it in front of the driver. The front wheels are pulled forward, long fenders are added and the hood is narrowed. There is an upright grille, external exhaust manifolds, large headlights, and chrome. So much chrome. There are also four massive air horns, a bonnet-mount spare tire, running boards, widened rear fenders, and a vinyl landeau roof. The trunk has also been bobbed with a Continental spare added for good measure. Interestingly, or maybe shockingly, the steering is via cable. There is also a heavily revised interior with power Recaro seats, a completely new dash with a forest worth of wood trim and a few other highlights and garnishes. Unlike the Fiero-based kit from a few weeks ago, this car is actually entirely assembled and painted at the Zimmer factory. 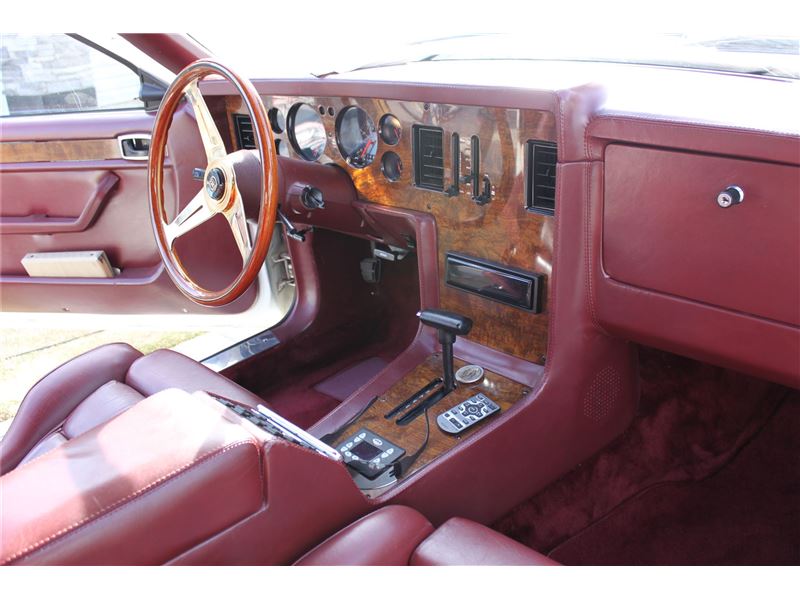 This 1985 model is white with burgundy leather and matching deep pile carpet interior. It's on an aftermarket Air Ride airbag suspension for a smoother ride. Or you can just slam it when you get to the show. The 5.0L Mustang V8 has been stroked to 5.8L and has improved cylinder heads and intake manifold installed to boost the 210 factory horsepower to an owner reported 400 hp. The interior looks clean, the dash looks brand new (many '80s dashes are prone to cracking, and this would be a tough one to replace), and the stereo has been updated with a CD player. There is even a decorative vase beside the opera window. The owner claims 51,000 km, and the rest of the car looks the part. This car has also received several show trophies.

Maybe you want to stand out, or you long for the vintage cars of the 1920s but without the reliability and parts issues or the huge purchase or running costs, or maybe you just want to have a really wide turning circle? If so, then this Zimmer Golden Spirit, our autoTRADER.ca find of the week for sale in Madeira Park on BC’s Sunshine Coast, just might be the car for you.