Over 14 seasons, Darcy Tucker donned the jerseys of the Toronto Maple Leafs, Montreal Canadiens, Tampa Bay Lightning, and Colorado Avalanche. At 5’10 and 180 pounds, he was an offensive agitator on the ice, scoring 215 goals and 261 assists during his NHL career. He hung up his skates in 2010, but still takes to the ice as a Brand Ambassador for the Scotiabank Hockey Day in Canada, which celebrates Canada’s favorite pastime, this year in Kamloops, BC, on February 6, 2016. Back home in the GTA, Tucker stays true to his Alberta roots – he’s a truck guy at heart and drives a 2015 Ford F-150.

DT: “I’m a farm boy from Alberta so it makes sense. It makes life simple. I like to tinker around. I had 14 cedars in the back of it last spring when I did my landscaping in the backyard. In retirement you have more time on your hands so the F-150 serves me quite well. It’s so awesome – it’s one of the best driving vehicles I’ve ever had. I enjoy it. I can do anything with it. I can put the kids’ hockey equipment back there and it doesn’t stink up the vehicle. There’s so much room in the cab, too. You can put five people in it comfortably. It’s all-purpose.”

DT: “It says where I came from, how I grew up, and the kind of person I am. I’m hard-working and dedicated to making sure things are looked after and kept well around the house.”

DT: “Yeah. I think it has more power and strength than me, for sure. Maybe not as much as Wendel [Clark – who also drives an F-150],” he laughs. 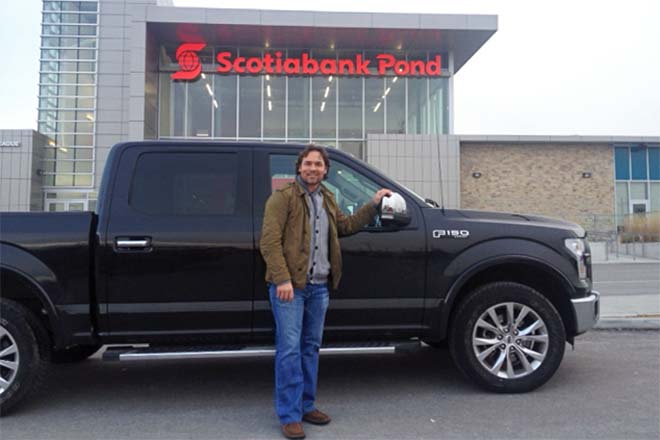 PG: “Do you know what’s under the hood?”

DT: “No. I’m not a gearhead, but we always had trucks when I was a kid. My dad always had a pickup truck growing up – he had a Chevy, a Ford, and a Dodge so he’s run the gamut of vehicles. We packed things in and put bails in the back. It shows you’re a hard-working man.”

PG: “Did your dad teach you to drive?”

DT: “Oh yeah. I was in the car with my dad since I was a little boy – back then there wasn’t much. We had the front seat and that was it. We didn’t have the dual cabs that they have now. I was always up in front watching him drive and even in the tractors, as a kid, I was up in the front cab watching him. We had a big GM dump truck as well so I learned to drive that. You learn to drive stick pretty fast when you’re a kid, too, because those big dump trucks are sticks.”

“In Alberta you get your learner’s permit at 14 and where I grew up there was not much going on. Houses were spaced 4-5 miles apart so I grew up driving on gravel roads and I think at the time we actually had a Dodge. Trust me, I could barely see over the wheel!”

DT: “I moved away to play junior hockey and my grandparents helped me get a Pontiac Tempest. When I signed my first NHL contract I got a GMC Jimmy. It was so rewarding after all the years of hard work and then signing your first contract and getting your own vehicle.”

PG: “Did you own any sports cars?”

DT: “I’m not a sports car guy. My brother-in-law, Shayne [Corson], always loved driving sports cars, but I never got into them. I never owned a sports car. I don’t know if it was the way I was brought up, but I never felt comfortable in a car. I always had to have either an SUV or a pickup truck. I did drive a Lexus and a Range Rover. But there was always a pickup truck somewhere along the line in the background of my life.”

PG: “What’s your driving record like – any speeding tickets?”

PG: “Do you ever fight tickets?

DT: “No. When you’re caught, you’re caught. Like anybody, if you go a few over, it’s not a big deal, but if you’re going 15 over you deserve to get caught. I drive my truck around now like my grandfather used to drive his around – very slow and it probably annoys a lot of people.”

PG: “Is your wife allowed to drive your truck?

PG: “Have you taught your daughter to drive your truck?”

DT: “I have, yeah. She’s a really good driver. She likes the truck, too. She’s a country girl at heart. I don’t know how that happened living in Toronto and growing up in the city. Maybe it was just ordained to be that way cause I grew up on a farm.”

DT: “I listen to sports-talk radio and my kids hate it. I’m not a music guy. But if I do listen to music – it’s country. And nobody is allowed to touch the radio dials. If they touch it, they get their hands smacked. You’re in my vehicle and you’re going to listen to what I want. If you go with mummy you can listen to whatever you want in her vehicle.”

PG: “Have you ever bought or sold a car on autoTRADER?

DT: “I’ve looked on autoTRADER many times, but I haven’t used autoTRADER to the end. I enjoy looking at vehicles online. I actually look online at the older vehicles, too. I love old trucks. Those are cool. To get an old one and refurbish it would be awesome. I’d like to get a Defender – there are many different ways you can redo that one.”

Notable achievements:
• 1993, drafted in the NHL Entry Draft by the Montreal Canadiens
• played 947 regular season and 68 playoff games in the NHL
• scored 215 goals and had 261 assists for 476 points in the NHL and accumulated 1,410 penalty minutes
• one of four players in the 90 year history of Major Junior Ice Hockey to have won three Memorial Cups in 1992, 1994, and 1995
• 1995, won a World Junior Championship Gold Medal representing Canada in the World Junior Championships in Calgary
• guest TV appearances on the Sean Cullen Show and Little Mosque on the Prairie

Upcoming:
• Brand Ambassador for Scotiabank Hockey Day in Canada in Kamloops, BC on February 6, 2016