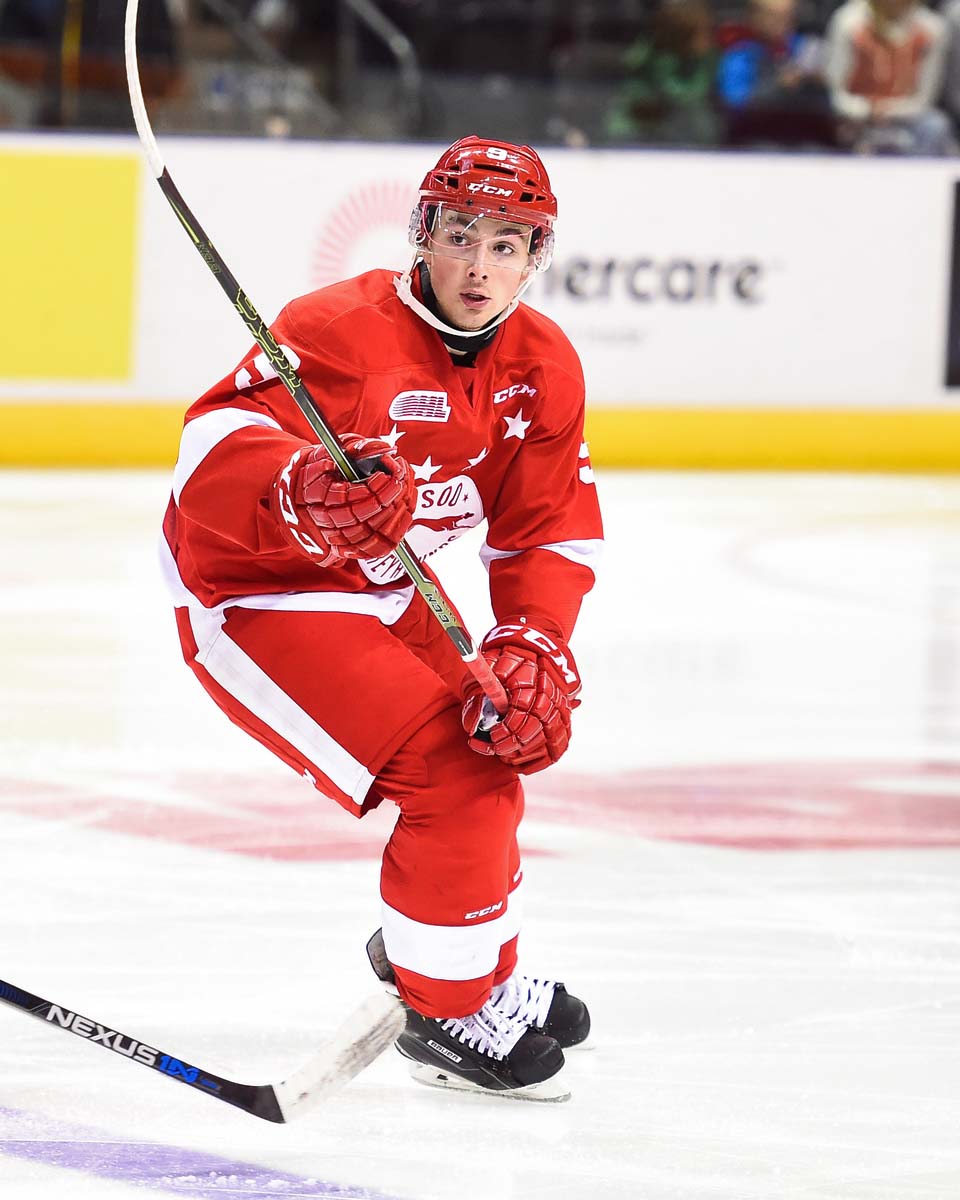 Described by fellow draftee (and perhaps future teammate on the NHL’s Boston Bruins) Jake DeBrusk as “a really good guy,” the Sault Ste. Marie Greyhounds’ Zach Senyshyn remains modest, and appreciative of how far he’s come. He’s especially proud of being a member of the “Soo” Greyhounds, recently ranked by The Hockey News as the best non-NHL hockey franchise. Oh, and the “player to watch” on the Greyhounds, according to that very same publication? Well, Zach Senyshyn, of course!

“Being a part of this organization and to work with the people here is the best path for me to the NHL,” he says.

“I take great pride in putting that Greyhound on my chest.”

Indeed, when the ghosts of players past patrolling the halls of your home arena — it’s called the Essa Centre — have names like “Wayne Gretzky”, “Paul Coffey” and “Jeff Carter”, you know you’re in one of the hotbeds of hockey lore.

Of course, just because your graduating classes through the years form a tapestry of NHL superstardom it doesn’t mean your team is a guaranteed success every year, and this year has been a challenging one for Senyshyn and his squad.

“We’re a really young group,” says Senyshyn. “There’s been lots of ups and downs, but I’ve seen night-and-day changes in the younger guys as the year goes on.”

That statement alone shows the maturity Senyshyn holds; at 18, he’s not the youngest guy on a team that features a handful of 16- and 17-year-olds, meaning that even at 18, he talks like a leader would.

Maybe those qualities come from always being part of a tightly knit group, as so many hockey players are. And maybe, that feeling of camaraderie also stems from being packed into his mom’s Dodge Grand Caravan in his minor hockey days.

“My mom had ‘the hockey van’,” he says. “You could pack, like, six guys and their hockey bags in there.” It seems all those nights and early mornings in a Dodge rubbed off on a young Senyshyn; he still drives a Dodge today, albeit one cut from a slightly different cloth.

“It’s an ’08 Dodge Avenger,” he says. “My Grandpa got it for me.” Indeed it goes further than that; when asked about what his dream car might be, well, the answer may surprise you. Lamborghini Huracan like his buddy Jake DeBrusk? Nope. Porsche 911 Turbo? Uh uh. Cadillac Escalade, riding on aftermarket 22s? Not a chance.

In fact, Senyshyn doesn’t hesitate to answer when it comes to the question, not for a second.

“I’ve always liked the looks of that car,” he continues. “May have watched one too many Fast and Furious movies, but I love the Vin Diesel muscle car thing.”

It’s hard to argue with that. Hard to argue, even, with Senyshyn’s dream choice of an automatic transmission. Hey, if autos were good enough for Dom Torretto…