Okay, repeat after me, “In cold weather, winter tires are better than all-season tires.” You knew that, yes?

So how come Canada’s winter tire usage rate remains low, with only 50 percent of drivers using them? (That number doesn’t factor in Quebec, the only province where fitting winter tires is mandatory). You’d think that in Canada, of all places, winter tires would be as common as toques and ice skates.

According to the Tire and Rubber Association of Canada (TRAC), winter tires “play a measurable role in protecting drivers and increasing road safety. They save lives, reduce accidents.”

Add this to the shorter stopping distances, better cornering and overall control and improved acceleration delivered by winter tires from a standstill, and using winter tires should be a no-brainer, so again, why aren’t they on all (or at least, more) cars?

Mind you, tire companies themselves haven’t helped the cause over the years by marketing all-season tires as just that: tires that are suitable for all seasons. It’s only comparatively recently that dedicated winter tires have been pushed as a superior and safer choice.

Unfortunately, winter tire shipments to British Columbia dropped by 19 percent and shipments to Alberta and Saskatchewan declined by 6.5 percent, but overall, winter tire usage is slowly moving in the right direction.

Nonetheless, from TRAC’s perspective, the large number of drivers not using winter tires poses a threat to safety on Canada’s roadways, simple as that. The organization believes the way to reduce this threat is education. TRAC suggests that if industry, governments and media worked together, the “potentially life-saving benefits related to the use of winter tires,” would become convincing enough to change people’s behavior.

It’s a noble cause and very much worth continued effort.

But TRAC’s use of the Three-Peak Mountain Snowflake symbol (also used by the US Rubber Manufacturers Association) to identify dedicated winter tires, while helpful, is also a source of some confusion.

Embossed on the sidewall of a tire, the symbol (also referred to as the “Alpine” or simply “Snowflake” symbol) is only allowed on a tire “because it meets the industry snow traction performance requirements,” according to TRAC.

In the US, the same statement is made: “A three peak mountain/snowflake symbol branded on the tire's sidewall identifies tires that meet the required performance in snow testing.”

The Snowflake symbol is based on the American Society of Testing and Materials (ASTM) F-1805 test, which, according to TRAC, takes place on “medium-packed snow in standardized testing conditions to ensure [the tire’s] snow traction performance meets or exceeds minimum industry snow traction requirements.”

Snow, snow, snow. How many times have you heard someone argue that they don’t need winter tires because “it doesn’t snow much in my area?” In fact, many people still refer to winter tires as “snow tires,” which also doesn’t help because, as TRAC research suggests, many firmly believe that an all-season tire will do the job.

Dig a little deeper and it turns out that ASTM F-1805 is both a snow and ice test. According to ASTM International, “This test method covers a procedure for measuring the driving traction of passenger car and light truck tires while traveling in a straight line on snow- or ice-covered surfaces.” Interestingly, the test is conducted only using rear-wheel drive vehicles, and, as inferred from the description, doesn’t include cornering.

TRAC sows a little more confusion by allowing the Snowflake symbol to be used on so-called “all-weather” tires. They too meet ASFN F-1805, but TRAC cautions that these are not winter tires designed specifically for Canadian winters. The issue must be the use of ASFN F-1805 as the key determinant of the TRAC-endorsed winter tires designation, because these all-weather tires certainly comply. Consequently, as TRAC must and does concede, “Any tire with the Three-Peak Mountain Symbol is considered a winter tire.”

Kaltire, the Canadian retailer for Nokian all-weather tires supplies an excellent chart comparing the performance of various types of winter tires – studded, non-studded and all-weather, each of them wearing the TRAC Snowflake symbol. These are compared with all-season tires. As you can see, the all-weather tires fare less impressively than the non-studded tires in wet ice, rough ice, soft snow and hard-packed ice. Nokian Tyre North America, however, maintains its all-weather tire has, “Absolute grip and excellent handling in all winter conditions.” 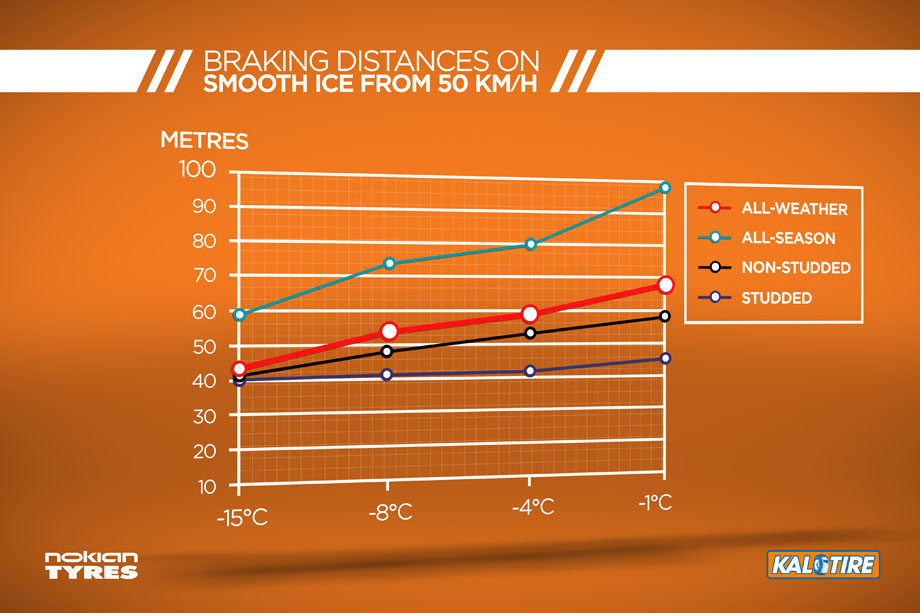 I can see that an all-weather tire could be suitable if you live in, say Vancouver or Victoria, but in my view, if the Snowflake symbol is to remain credible, it should be identified as recommending superior ice, snow and cold weather performance and it should only be used on tires designed for Canadian winters.

However, we can all agree that any winter tire is superior to an all-season tire in winter conditions. As TRAC rightly points out, “temperature is everything with winter tires.”

According to TRAC, once the temperature dips below seven degrees Celsius, the all-season tire compound begins to harden and performance sufferers. Anyone who’s ever experienced the behavior of a practice sponge puck on an ice surface as opposed to hard “game” puck will know what this means. The soft sponge puck tends to bind, snag, stick to the surface, while hard puck rockets across the ice.

Likewise, due to the softer rubber compound used by winter tires that resists hardening, stopping distances at temperatures just below freezing are up to 30 percent shorter than vehicles equipped with all-season tires. Furthermore, “winter tires deliver better traction on an ice or snow-covered road surface at -30 degrees than all-season tires at +4 degrees,” according to TRAC.

In conclusion, TRAC quotes a report from the Traffic Injury Research Foundation that cites studies demonstrating conclusively that, “winter tires provide superior traction, braking and cornering in all cold-weather driving conditions whether the road surface is dry, wet, icy or snow-covered.”

At the end of the day, it doesn’t get clearer than that!