In the world of two wheels, the 2015 Kawasaki Concours 14 is a behemoth. There are bigger sport/tourer bikes, sure – but not many.

The Concours has an overt relationship with the ZX-14 – visually, there are cues that align the two; less superficially, they share a platform. Despite the “14” designation and despite both being inline-fours however, they don’t actually share an engine. The Concours is not a horsepower hero in the vein of the Herculean ZX-14 but it is a halo bike in its own regard: the dream sport tourer for those who bleed green.

It’s an analogue example in a genre filled with high-spec, high-tech wizardry. Where others have multi-stage traction control, cruise control, heated seats and whiz-bang electronic suspension, the Kawasaki remains true to its roots with only heated grips, an electrically adjusted windscreen, single-stage traction control and a linked ABS braking system to distract from the big, burly and capable bike underneath the distinctive green fairings. 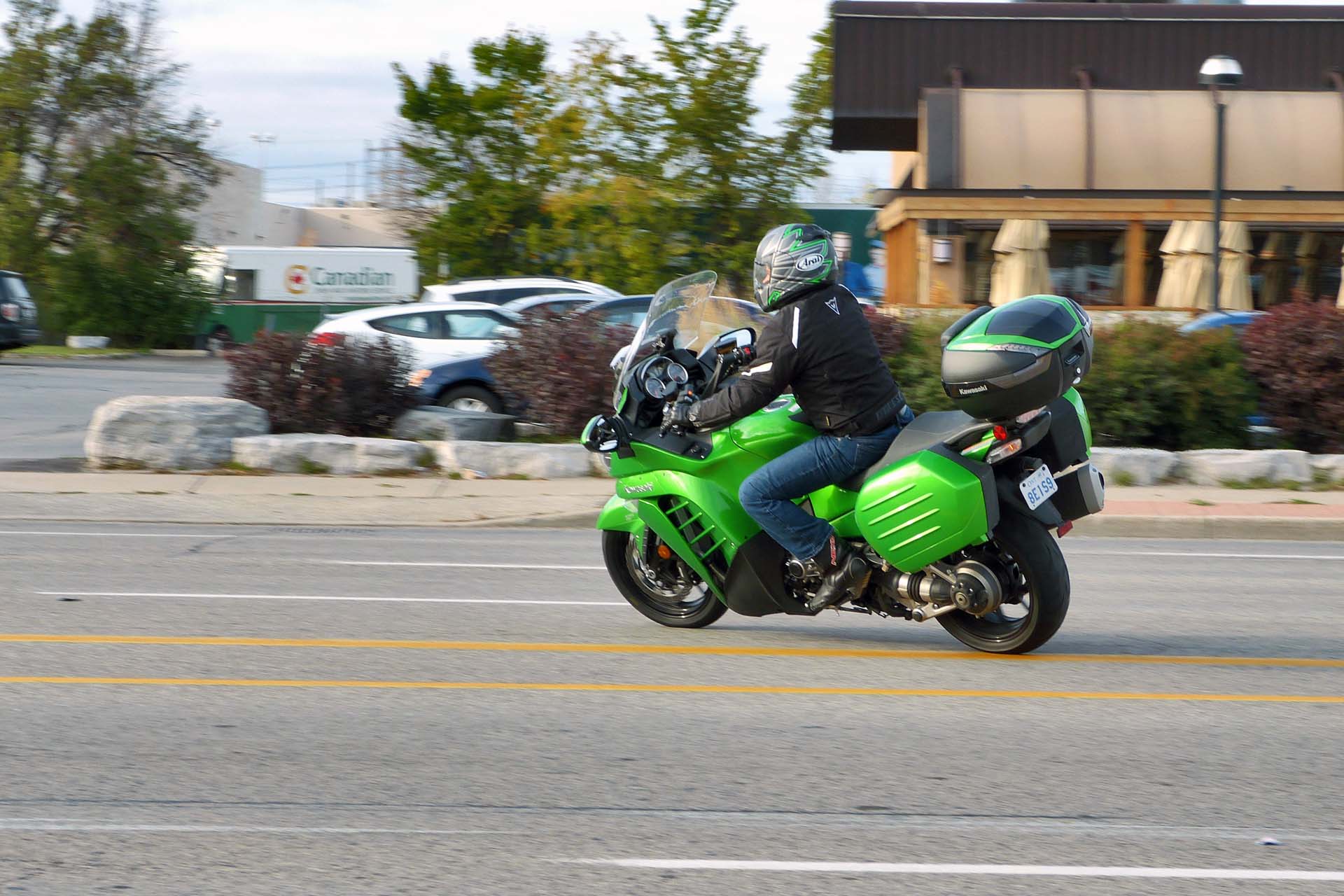 I had grand plans for my week on the Concours: first, an overnight trip to Paris, Ontario; then a weekend jaunt through Northeastern Ontario’s best roads.

With optional storage in the form of a top box (which doubles as a solid backrest for your pillion) and two panniers, the Kawasaki has big cargo capacity. The Kawasaki-built boxes and bags are a big deal for the company which only recently began using a one-bike, one-key system – previously the storage options were all secondary supplier bolt-ons. I crammed a full set of leathers in one pannier, with my spare helmet stowed in the top box alongside some underwear. A backpack containing my laptop, another change of clothes and a large notepad was jammed into the other pannier. Smaller things like your wallet and phone can be stored in a little box on the front left fairing, right above the control knob for the heated grips.

The journey to Paris was accomplished with consummate ease, the big, lazy engine effortlessly maintaining highway speeds, the wide seat providing ample support for my equally ample backside. The windscreen is a new unit for 2015 and Kawasaki is quite rightly proud of it. The shield itself is the same size and same electrically adjusted unit (with memory position) as the previous, but a new three-position vent in the bottom eliminates the buffering caused by the low-pressure air pocket behind the windshield. I thought this might be a bit of rubbish, but on the highway at 110 km/h I saw a dramatic improvement with the vent open. It really does work.

Sadly, torrential rain scuppered my plans for a lengthy Sunday road trip on the Concours, with only the Paris adventure to really satisfy the bike’s hunger for miles. The return trip from Paris was done at a brisk four degrees Celsius which made me A: happy for the heated grips; B: unwilling to stop and take photos; and C: grateful for the extensive protection from the biting wind offered by the fairings. 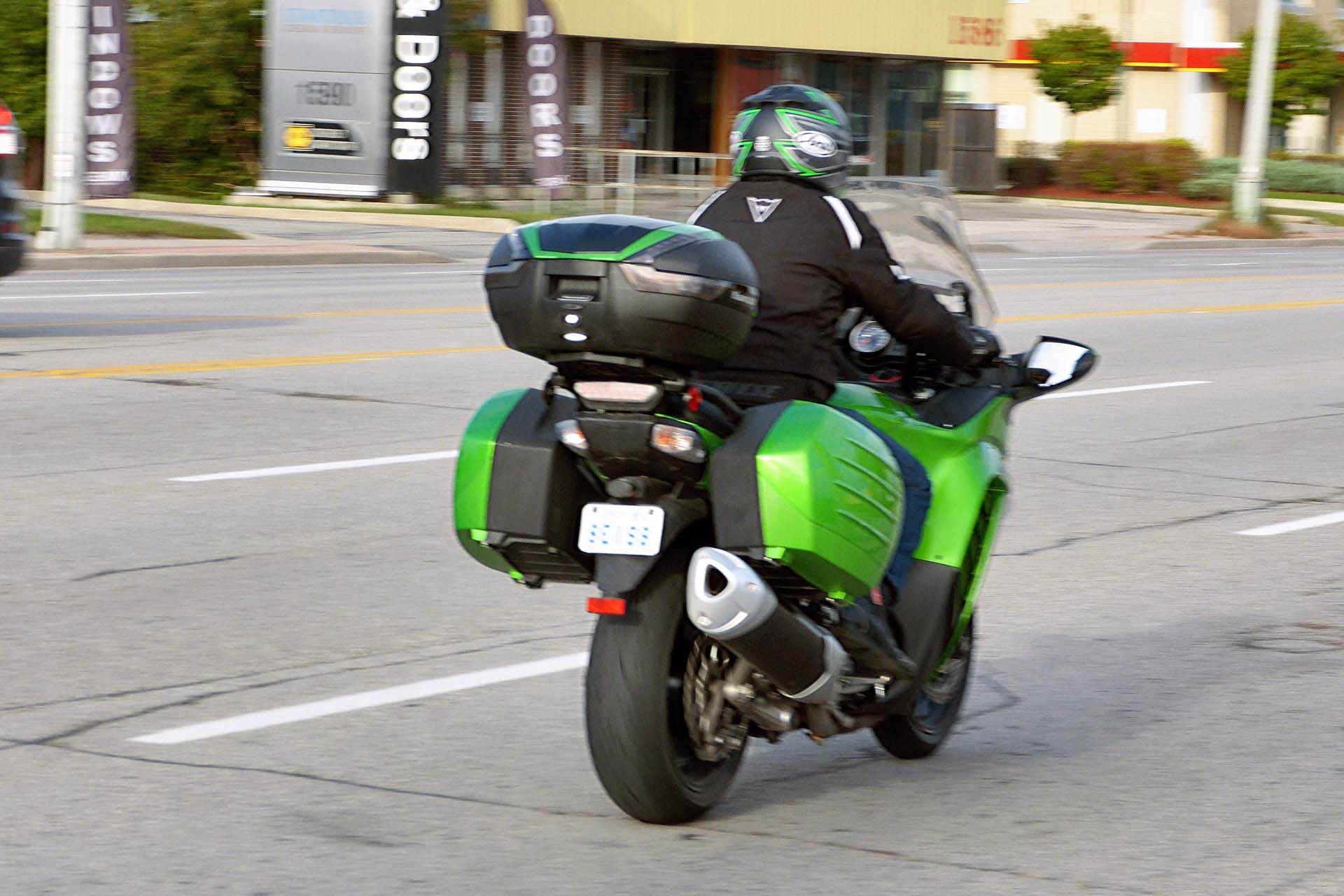 Two people could easily overnight with this bike, and if you packed smartly could even make it the whole week. My computer was the hardest thing to deal with, as it’s a 19-inch lump and took a little finagling to get into the pannier around the clips that encroach on the opening.

Once loaded, the panniers do add to the bike's already substantial 305 kg heft but the Concours does a decent job of hiding its weight. The only time you really feel the size of the bike is in longer, downhill corners where the front end begins to do its impression of Atlas himself.

Doing most of the disguising is the Kawasaki Concours’s 1,352cc inline-four engine. With 100 lb-ft of torque available at 6,200 rpm (well short of the 10,500 rpm redline) and maximum power of 152 hp (or 160 with Ram Air effect accounted for), the smooth and linear lump hurtles the Kawasaki forward with confidence.

The shaft drive makes for a smooth transition from internal combustion to tire rotation and the large 190/50ZR17 rear tire is more than enough to handle the grip demands. So much so the Concours is capable of performing frankly ridiculous looking wheelies – according to Google Image search, that is.

To do so, you’d need to disable KTRC, Kawasaki’s single mode traction control system. It’s simple to turn off thanks to the large orange button on the left grip. With it on, the Concours will allow a small amount of wheel slip just to let you know the surface grip is waning, before kicking in smoothly to keep you in the right direction. Riding in a sodden downpour I was able to leave traffic lights with confidence, knowing the rear tire was being held in check by the electronics. 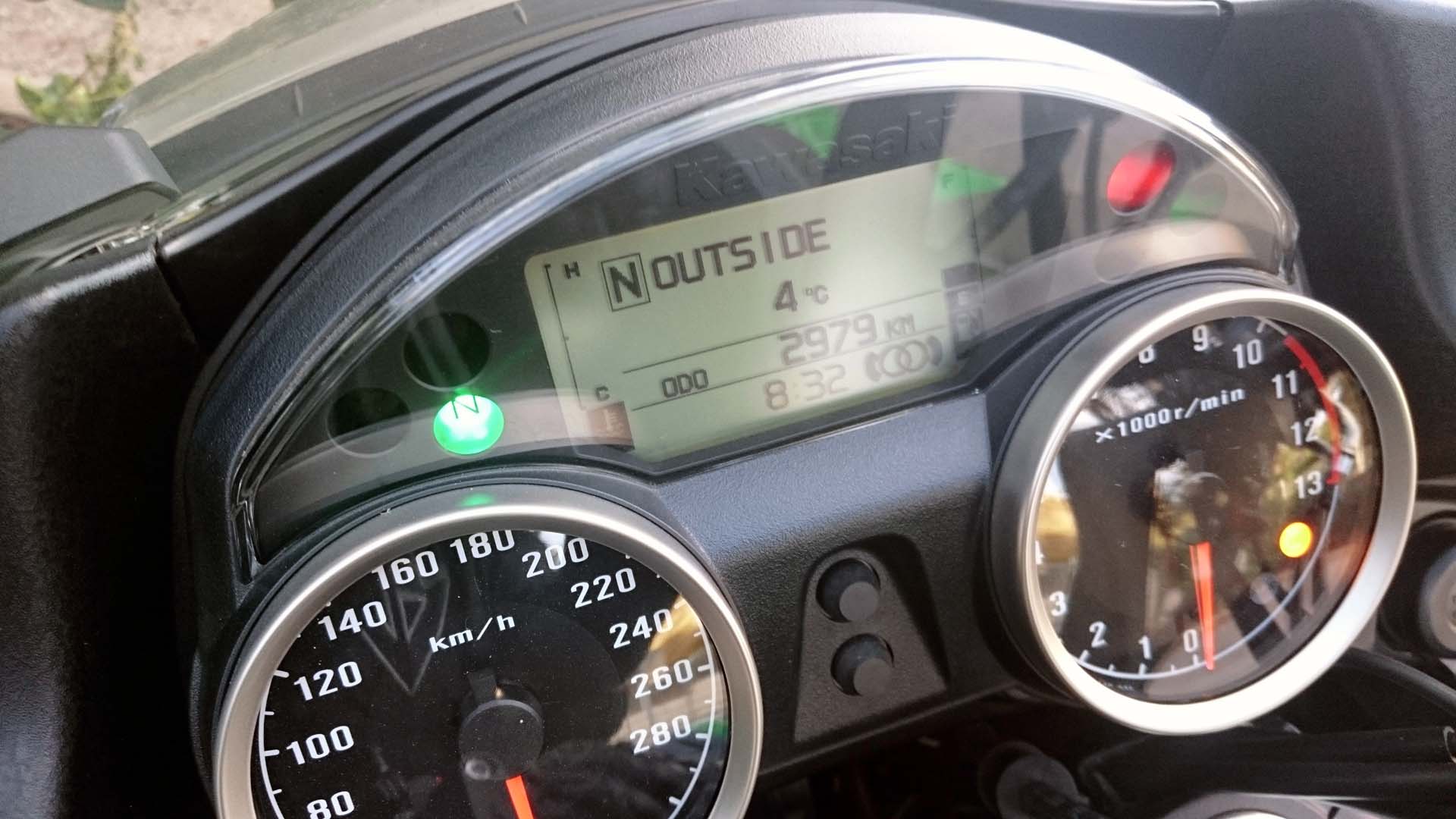 Adding to the suite of electric gizmos making it hard for you to crash is K-ACT ABS, or Kawasaki Advanced Coactive-braking Technology ABS. This system is a linked-brake system, so when you use the rear brake it activates a bit of front too, and vice versa. Many traditionalists don’t like linked brakes and Honda has begun to move away from them. Kawasaki tuned this one to give a little less front when the back is applied but the tune is not quite right yet. I nearly crashed in my parking garage when the front brakes kicked in. I used a lot of revs and the rear brake to maintain low-speed stability, especially on big bikes. Turning down and around a corner in my condo garage on slippery concrete, the linked-brakes kicked in suddenly, that caused the front to slide out a bit but I was able to rescue it. Another journalist had reported the same thing.

There’s a partial solution: You can use the other orange button on the left grip to set K-ACT to its least invasive setting before doing low-speed stuff. You might forget, but probably only once. It helps a little. Sadly you can't turn the system fully off.

Aside from that minor fumble the Concours brakes perform admirably. They are progressive and firm – far more so than you might expect from a bike of this size – again, that’s an area where Kawasaki successfully disguises its weight. Even fully laden I extracted consistent, confident braking without large amounts of effort or lever travel – exactly what you’d like. And in highway cruising scenarios I was grateful for the linked brakes and lazily kept my foot off the rear brake altogether.

It’s highway miles that the Concours really enjoys. Point the big green monster at the horizon and listen to the steady “nom-nom” of the engine as it eats up kilometres. Point it at a gap in traffic and grin as the stonking great engine shunts you into the space almost instantaneously. When the roads are winding the Concours is a poised and enjoyable fairground ride, perfect for the Iron Butts.