How to Win at Rush Hour How to Win at Rush Hour

Commuting, for you, is probably a grind. Your commute, for me and my fellow traffic engineers, is where we make our bread, butter, and car payments.

The good news: we have powerful traffic tools: high-tech signals, geometry tricks, roundabouts, vehicle detectors, and ITS (Intelligent Traffic Systems), not to mention transit systems to woo snoozing Corolla drivers off the roads. And you’d love our “sims,” computer simulations that let us play God with the details of who goes, who waits, and for how long.

The bad news: keeping you moving along is not always our first priority. Road systems are controlled by public agencies. That means politics, in the next room if not yelling into our ears. Sometimes buses and trains must get the nod over cars and trucks. We engineers don’t set the priorities, nor do we raise the funds for road alterations. Shaving seconds in traffic gets pricy when you need to call in the construction crew. Often we must make the best of what we have.

And so must you. But I’m here to help. By following these insider’s tips, you’ll gain at least a few car lengths, and maybe a few minutes, in the great endurance race we call the daily commute. 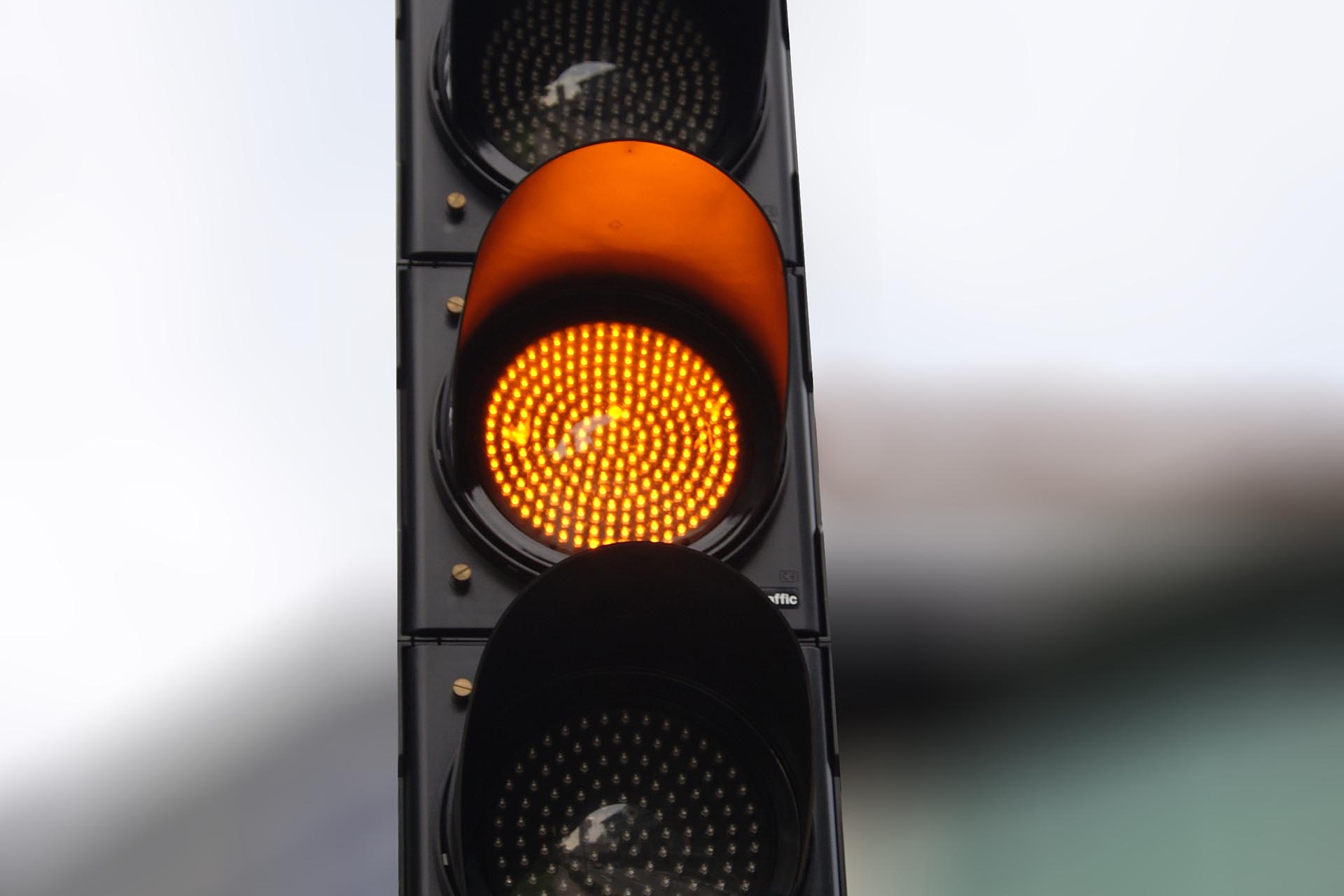 In this day of big box outlets and urban sprawl, traffic lights pop up faster than new Starbucks. Frantic development, more intersections, and increased traffic volumes all keep adding restrictor plates to your commuting efficiency. Time to call in the traffic-geek squad (we should get the call before the lights are added, but that’s life).

When traffic lights don’t “talk” to one another, chaos follows and traffic crawls. Just like Dr. Phil, we get the parties to communicate. Linking the lights with anything from plain old copper wires to high-tech wireless GPS devices enables us to replace chaos with green lights that seem to unroll just ahead of you like some magic carpet (when commuting, the last thing you want is the red carpet treatment). This is our synchronization tool.

Synchro is pretty common, but good synchro is art; expect less in the smaller locales. We use timing software for the signal controllers – plugging in traffic volumes, peak hours, even the block-by-block idiosyncrasies of the road itself – to set up a wave of green in your path. All you have to do is drive the way we planned you would.

Hit a light early in the green phase, stay near the speed limit, and if successive lights turn green as you approach, you’re probably on a synchronized wave. Look for other cues: as you approach intersections, are waiting vehicles leaving right before you arrive? Is traffic flowing at a steady pace, in tight packs between intersections? If so, you’re riding the wave, and I did my job. Main arteries are often synchronized, while secondary streets are not. Breaks may happen in the wave due to irregularly spaced cross streets, or interruptions such as bridges, railroad tracks and jurisdiction limits (read: different politicos have different edicts). Two-way streets are tricky to synchronize: we always engineer the waves to aid the direction of heaviest flow. On commuter streets, we reverse the wave between morning and evening. 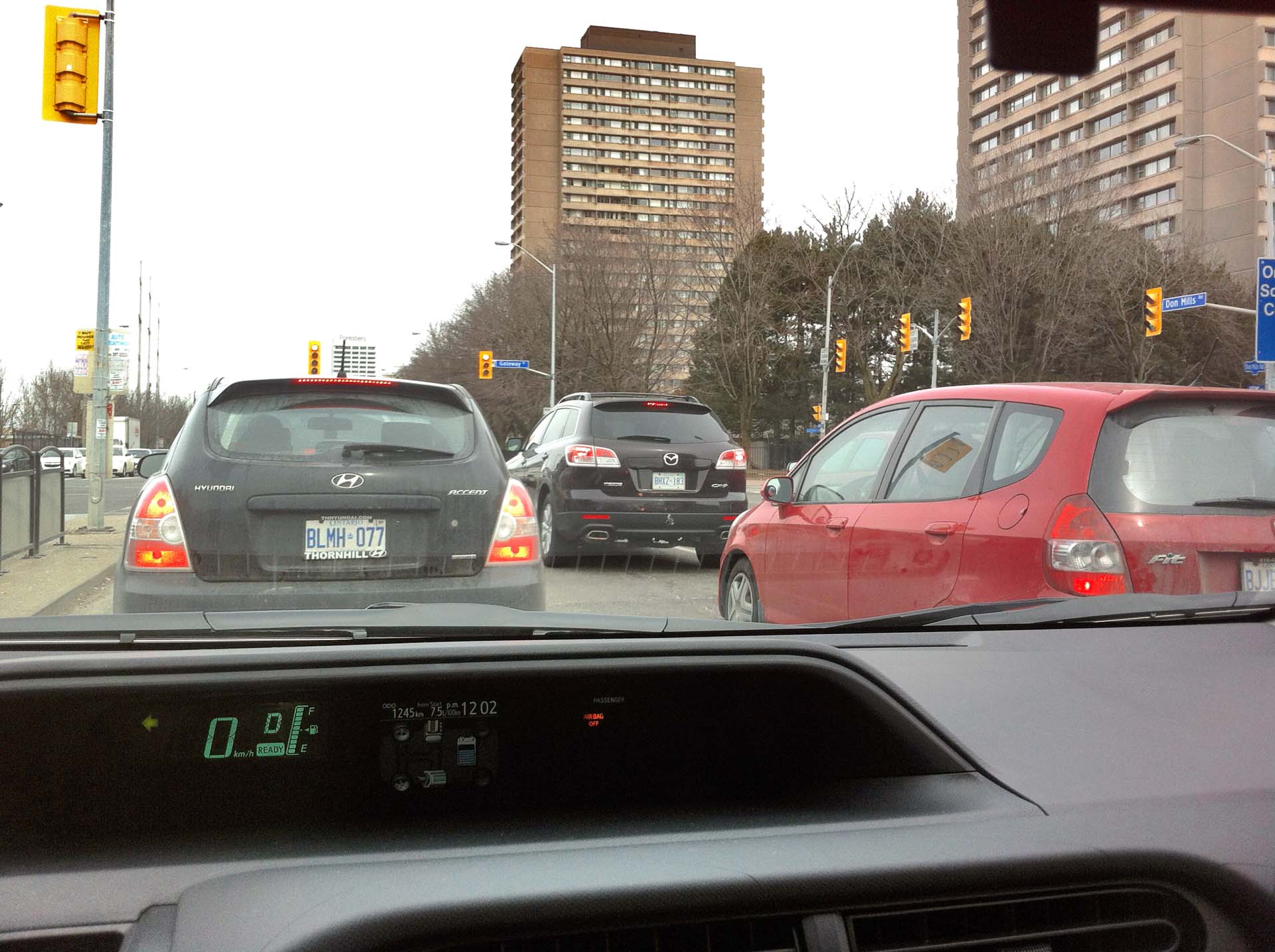 Here’s what you can do to stay on the wave. Resist the urge to carve your way through the commuting masses; they’ll get the laugh when you’re snared at the inevitable red and they surf up beside you at wave speed. You really can’t do better than the speed we’ve chosen for you, and normally that’s the posted speed limit (sorry!). This doesn’t mean we’ve nixed all opportunities for driving fun, however. If you happen to hit the tail end of a green, then you go, boy; catch up to the crest.

You can’t get ahead of a wave, but you can fall off the back. The farther you ride, the more the pack spreads, and if you’re toward the rear, you’ll be pushed off the back. Stay up front and you have a chance of surfing right to the end of a synchronized network.

We also design the waves according to daily traffic patterns. Run opposite the main direction of traffic, or come off a side street, and you’re sure to hit a red. My advice: Instead of running against the wave, find a one-way arterial that goes in your direction. One-way eliminates conflicting demands, so the wave always goes in the traffic direction.

Still, synchronization has its limits. When signal spacing is beyond a half-mile, maximizing local traffic flow takes priority over system design. Each intersection becomes its own system.

What can a driver do then to get through these isolated lights as fast as possible? Jump the loop.

Traffic engineering often comes down to managing the tradeoffs between the needs of the many and the needs of the few. These lonesome lights often feature some method of detecting a vehicle waiting for the green on the less-traveled street. Detection is also found in the urban core for left turns or pedestrian opportunities that we don’t want to be called at every cycle (it’s not fun when the elevator stops and nobody’s there). 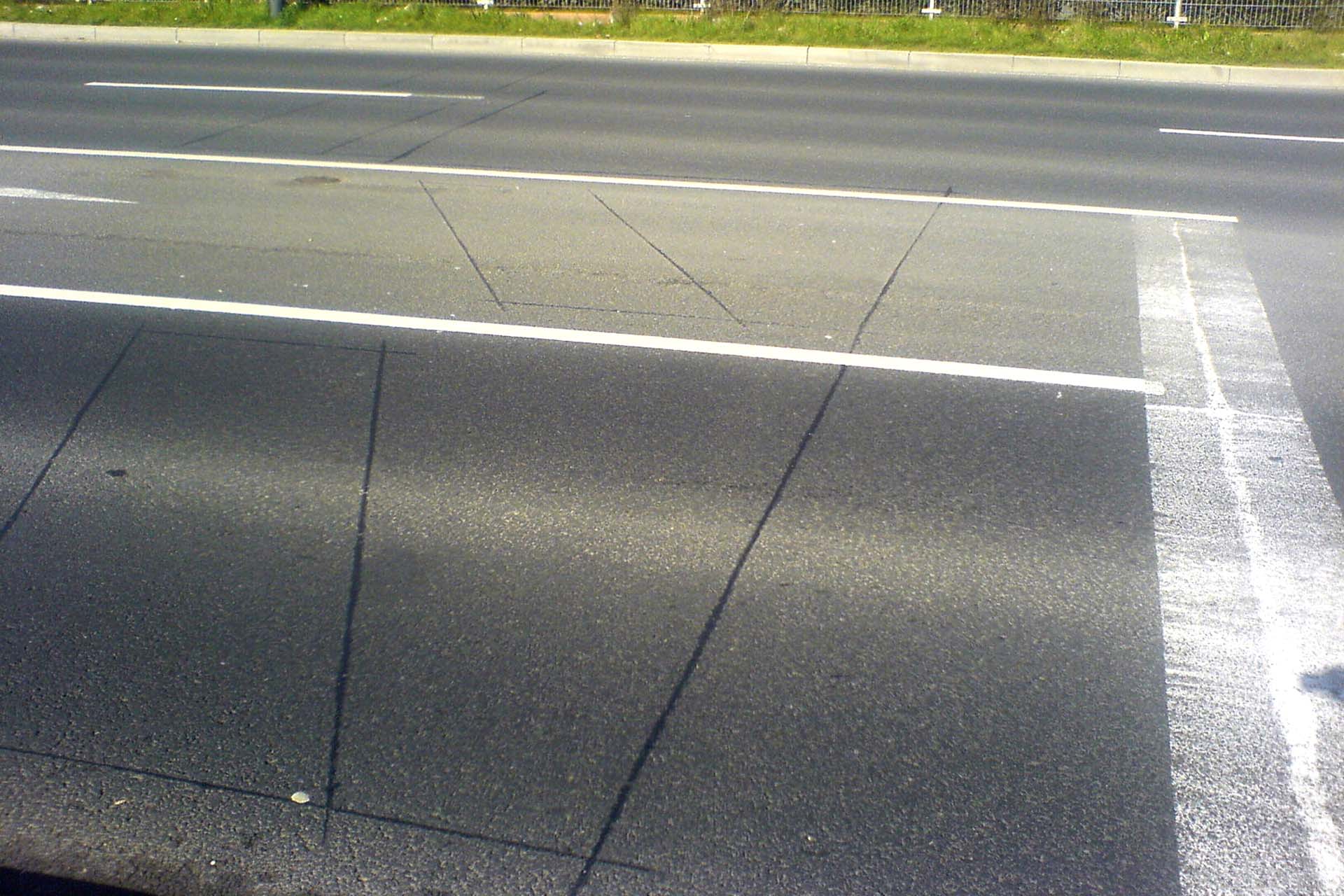 Ever noticed a square- or diamond-shaped patch in the pavement near a stop line? Or thin cut lines filled with sealant? These are the telltale signs of inductive loops, the most basic, cheap, and effective detector on the market. Inductive loops are just buried wire. When you drive over, the loop senses a change in the magnetic field and tells the traffic light controller that a vehicle has arrived. Other vehicle detectors come in the form of microwave radars or video cameras.

We program these detection systems to allow enough green time to clear the cars waiting in the average line, based on traffic counts. There’s also an “extension” feature to allow additional cars to extend the on-demand green up to a given number of seconds. But to guys like me who program the lights, these seconds are precious, so typical values for extending the original green are in the one-to-two-seconds range. If you snooze and give the car in front of you a three-second lead, the light will turn red in your face. Instead, cling to that car’s shadow and you will extend the green seconds, saving you a complete light cycle (anywhere from 50 seconds to 3 minutes, the equivalent of waiting for the elevator to come back to your floor after you just missed it). Here’s a case where tailgating pays off. So jump on that loop. I do so daily, and save about two minutes.

You may encounter other obstacles that need jumping. You can tell those arteries on which the residents have political clout. They’re the ones with speed humps and all sorts of warning signs. These humps used to be pre-fab devices bolted down to the pavement, but thanks to the cries of cyclists and snow-removal crews, many have been replaced by poured-in-place humps. These blend smoothly with the surface, carrying bikes and snow blades over them gently but slowing nasty cars. Or maybe not.

What the vocal citizens don’t know is that, most of the time, bumps and humps aren’t very well designed. I’ve seen a study that showed average speeds increased after bumps were installed. Motorists realized this simple fact: the faster you drive over a bump, the less you’ll feel it. So, if you’re stuck riding “bhumps” on your commute, experiment. Add an increment of speed on each pass. I have two of these disrupters on my route, and I now take them above the speed limit. It’s smoother and faster. Caution: humps vary, and too much speed on your first try will give the neighbours a General Lee moment that’s more fun for them than for you. 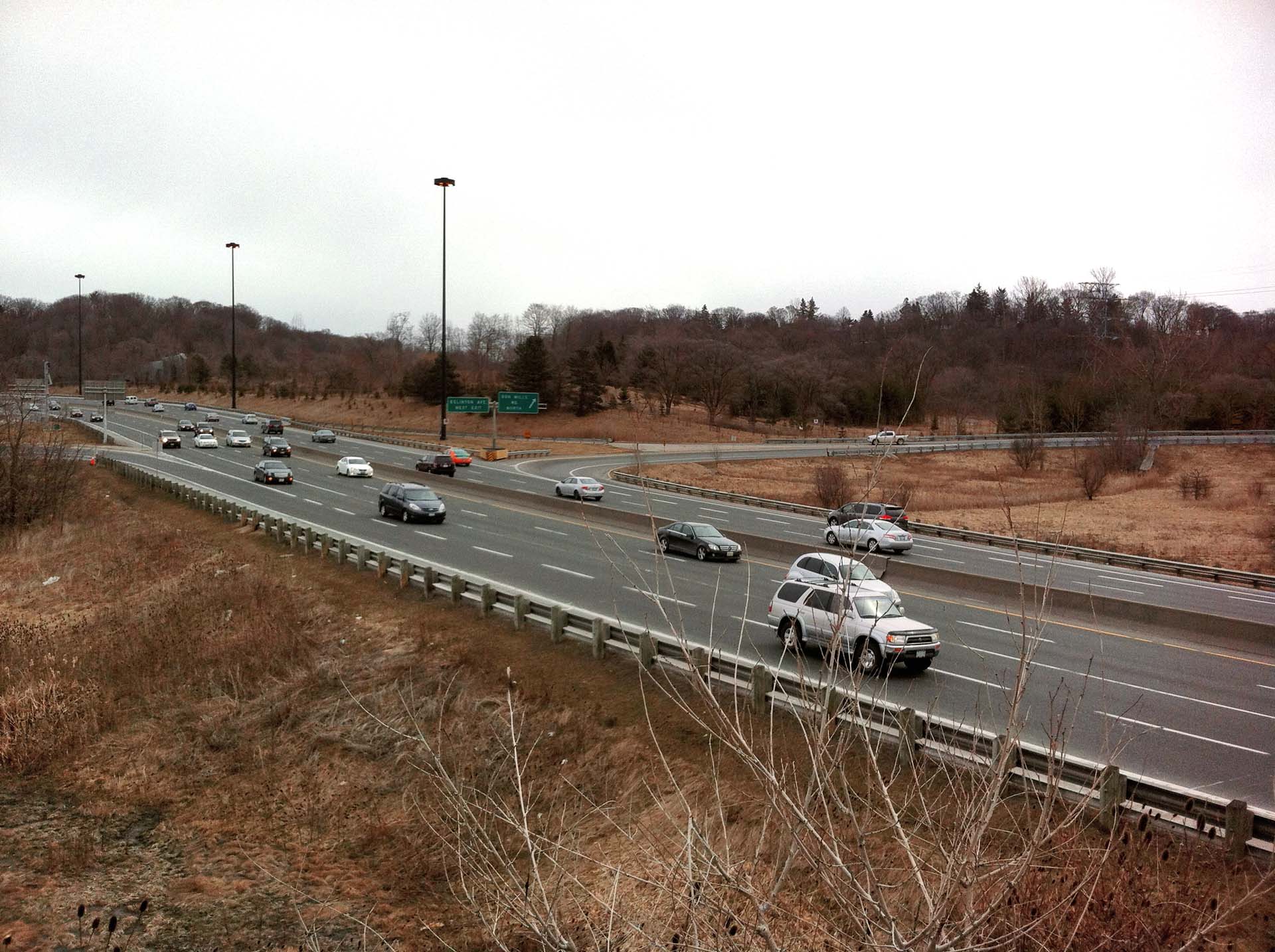 Crumpled orange sheet metal does bring to mind another topic, however. If you live in the snowbelt, as I do, summer months come with the beat-up caution signs, orange cones, repair crews, and heavy machinery. And no matter where you live, there are always the lanes that end, the mandatory exits, and the merges where the highway funds reached the bottom of the filing cabinet. Most commuters approach these constrictions on autopilot and merge early, overloading some lanes and emptying others.

Empty lanes are such a waste. Be proactive: drive up to that very last “Merge NOW!” sign, and enjoy putting 30 cars behind you. Let them honk or flash their lights: you are not the one lengthening everyone’s commute by underusing available lanes. Lane merges work best when traffic flows together as the lanes meet. Think of a zipper. That’s the concept. Just don’t be the jerk that uses the end of a merge lane or the shoulder to pass three cars.

Zipping, of course, is not the same thing as speed. But endurance racing is less about speed than you might think. Instead, winners concentrate on avoiding all opportunities to be slow, and they keep their stops both short and rare. My tips follow the same logic, and they work. Even in a Corolla.