The first thing you notice taking off on the 2015 Yamaha FJ-09 is the power – it’s surprising. This is the same engine as the FZ-09 after all, allegedly down-tuned a tad for this application. Down-tuned isn’t really the right word though. Sure, it’s a bit softer than the more sport-focused FZ, but the FJ is still capable of dispatching an inattentive pillion passenger.

If anything, the remapping of the engine has made the engine feel even more convincing. Part of that is its smoothness. Where the FZ seems to snatch forward, the FJ-09 surges. A great wave of torque is on hand to thrust you towards your goal. There’s a peak of 64 lb-ft at 8,500 rpm but a lot of that feels available earlier. Here in North America, Yamaha doesn’t publish horsepower figures, but this engine is rated elsewhere at 115 – again, the engine gets to work making that in short order with a linear power delivery you can’t help but grin at.

“They’re going to sell a lot of these,” I thought as I clicked up through the gears.

The FJ-09 is a soft road–ready sport-touring bike. It’s tall with a ton of suspension travel. The 41 mm upside-down forks house a progressive-rate spring and give 5.4 inches of travel, it feels soft early but soon firms up. The rear has 5.1 inches of travel and both ends are rebound and preload adjustable. Annoyingly, the rear unit is only adjustable with a C-spanner at a time most others in this class have some sort of remote adjuster available. Then again, riding two-up I didn’t feel any great need to adjust the preload. 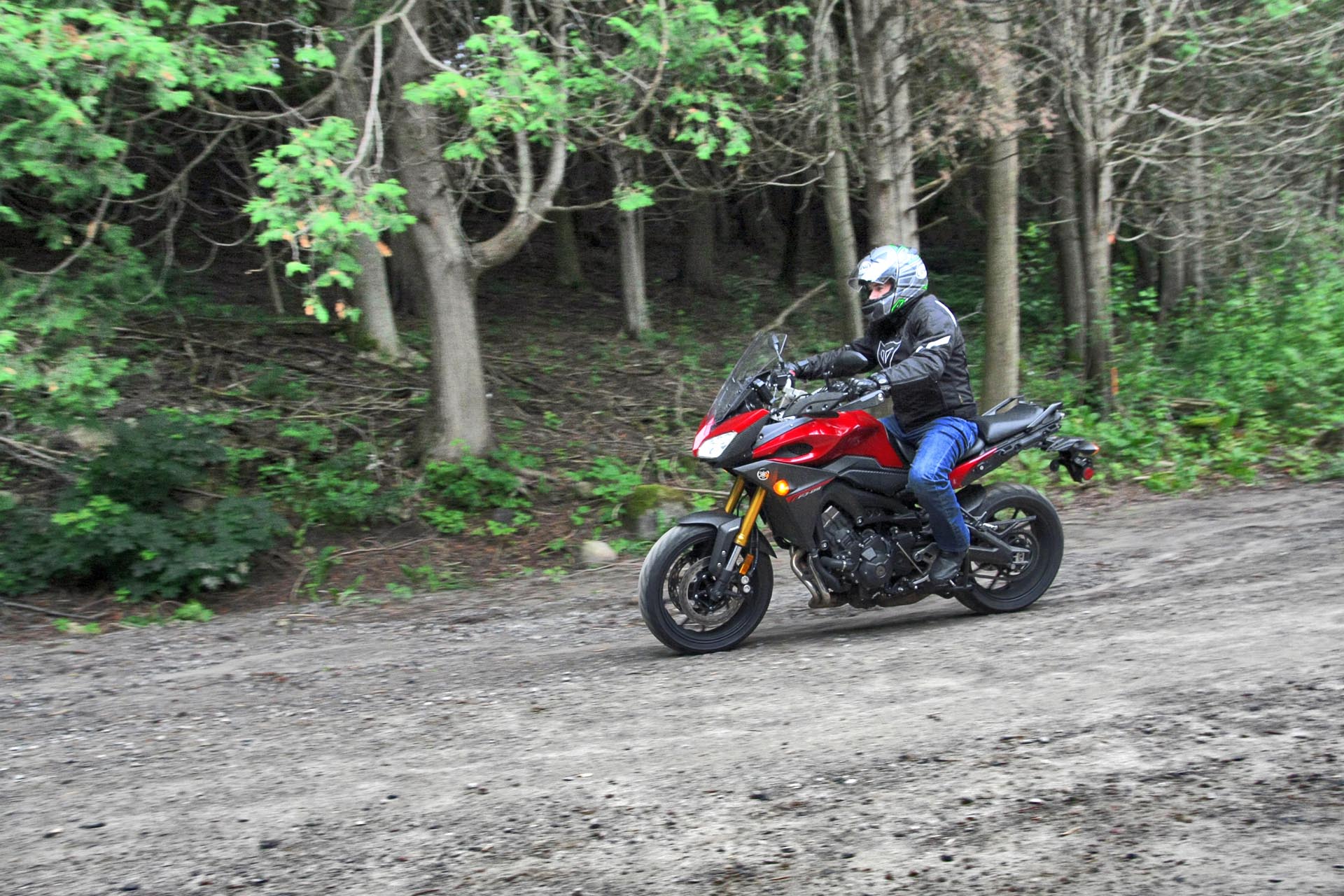 The bike feels surefooted and stable on loose material, but even with traction control turned fully on lacked edge grip from the 180/55 17-inch rear out in the tight and technical asphalt sections. On the slightly more open winding roads though, the FJ is a revelation. It tracks true in every corner and gives plenty of room for adjustments – which you’ll be making more likely as a result of the organic component than the mechanical.

I’m no dirt guru, preferring the track or the road, but the FJ was forgiving enough for me to tackle gravel back roads with confidence – even when two up. On asphalt I care about rear grip but on dirt I need to feel secure in what the front tire is doing to be truly comfortable. I did here. Are there better bikes for soft roads? Probably, but this one won’t have you shying away from them.

Nor will you shy from long road trips.

After two straight hours on the FJ neither I nor my passenger were any worse for wear. That long progressive suspension and the wide, thick seat do a phenomenal job of soaking up bumps and provide great comfort.

My passenger was a fan of the large, meaty grab handles but I admit I felt better with her arms securely wrapped around me. Because safety, of course!

A moment of exuberance with the throttle led me to nearly overshoot my turn off from one B-road, but the ABS-equipped brakes at both ends had me slowed enough to make the turn in properly short order. A similar test on gravel netted similar results, but I know some people will want to turn off the systems in order to steer the bike with the brake and/or throttle in those settings. Happily you can turn off the traction control altogether but the ABS is permanently on. This might be a problem for those with a dirt background who like sliding the back wheel under braking to help turn the bike, but it worked well for me. 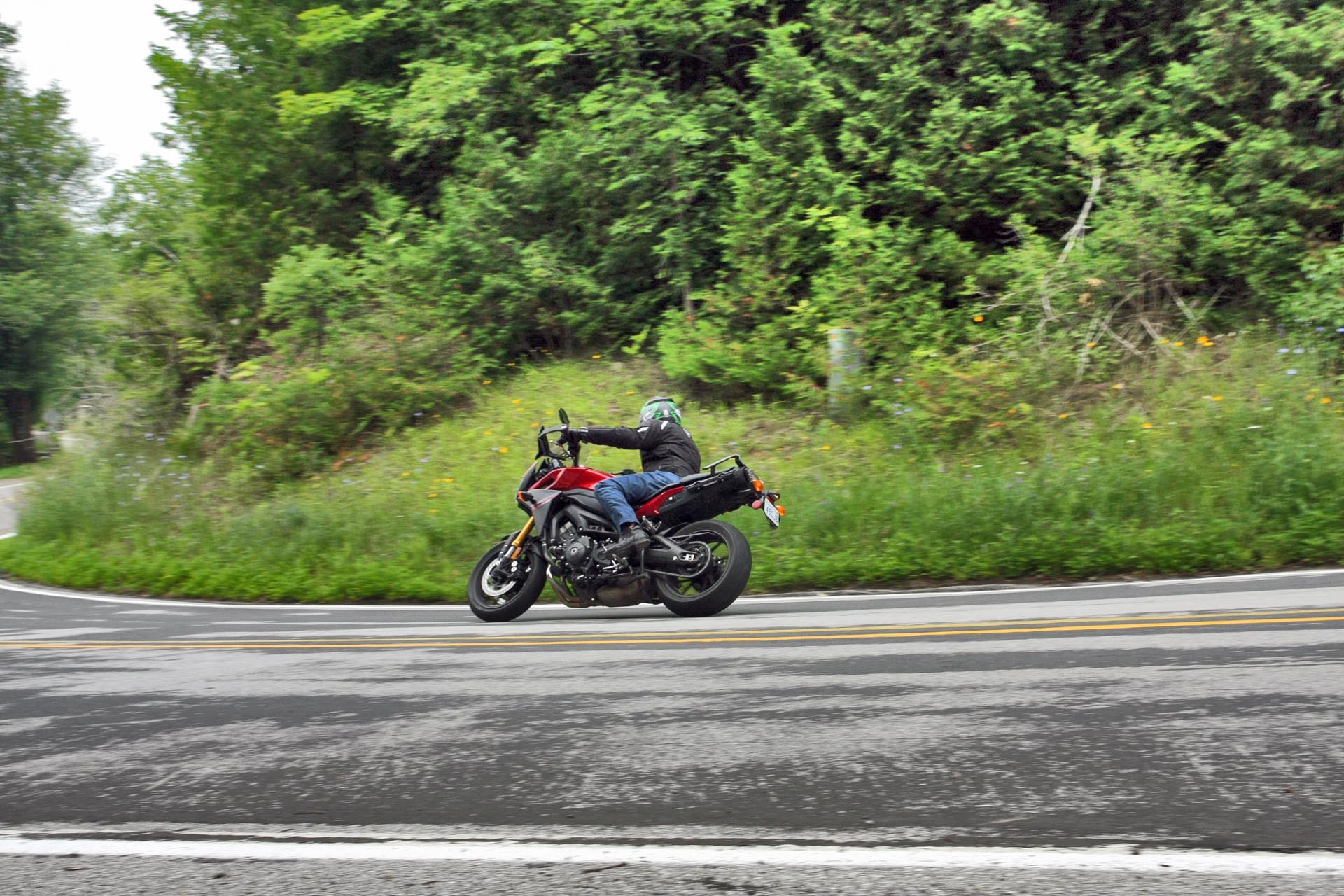 For the touring crowd there’s an adjustable windscreen with two screws mounted under the dashboard to undo before you can slide it up or down. I had trouble getting the right one to stay tight after I played around with it despite doing it up as hard as I could. Hand guards and optional pannier bags are some of the other welcome additions for the travelling type as are the optional heated grips – the grips are already pre-wired for them.

There is also a DC power-outlet to power your GPS to the left of the large, industrial style dashboard.

That same dashboard showed me an average of 5.2 L/100 km giving me well over 300 km of range despite my excitable right wrist. Trip information is all controlled by a large, easy-to-reach multifunction switch on the left grip, and three engine modes can be toggled with a switch on the right lever.

The bars, which are high and wide, give good comfort but I found them too wide for me at 5’6". The seat height of 860 mm was also a tad higher than I’m really comfortable with but despite the size of the bike it weighs in at a svelte 207 kg wet. That’s a number that I’m sure Yamaha worked hard to keep down, and the new low-mounted three-into-one exhaust is just one of the ways weight is kept lower than you might expect. 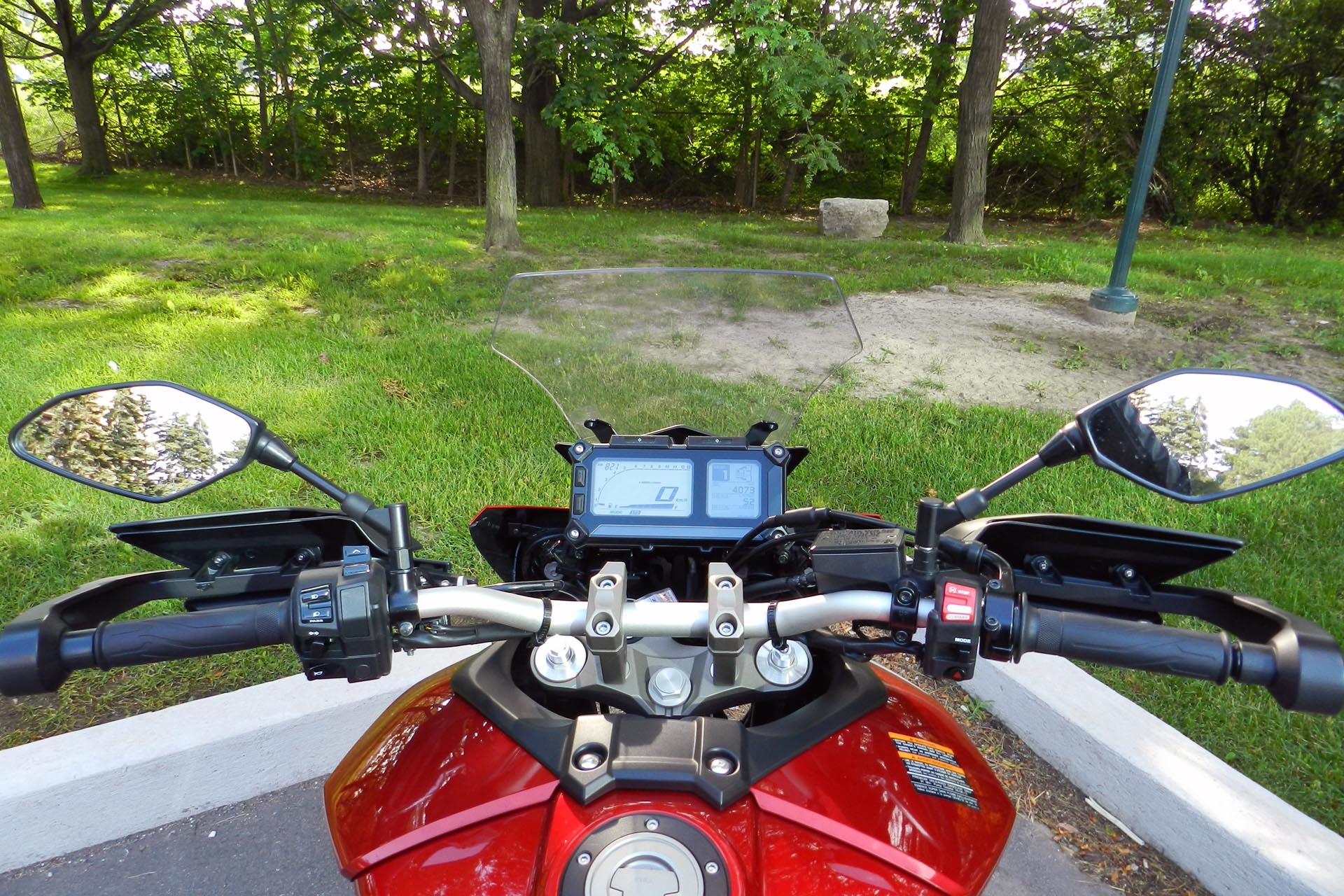 Perhaps one of the biggest shocks of the 847 cc inline-triple is the lack of vibration. The engine is throaty and gruff for the ears, but silky smooth for the backside despite being a stressed member in the frame. The complete calm of the bike at idle is a thing to behold and the lack of vibrations at highway speed probably helped with the lack of fatigue I mentioned earlier.

If you wanted a bike that chewed up kilometres of just about any road surface you felt like plus got you and your passenger to your destination with a grin on your face and energy left for dancing it’s hard to look past this one. Especially with a $10,999 price tag.

Many bikes claim to be great all-rounders, the 2015 Yamaha FJ-09 lives up to that promise. How to: Launch a Boat Solo

Reasons to Go to The Motorcycle Show Toronto