BMW has updated its iconic sports sedan, giving the 5 Series a new mild hybrid system along with visual tweaks and tech upgrades.

The 2021 BMW 540i xDrive (along with all six-cylinder models) gets a 48-volt mild hybrid system that is becoming increasingly common in the luxury car market. The system uses a powerful starter-generator and does not allow for the sedan to drive on battery power alone, but should help increase fuel economy and enable the engine to run more efficiently by taking over the task of powering the car’s accessories. The system’s dedicated battery is charged via regenerative braking and the generator. The system also gives an electric boost of 11 hp when called upon and should make the engine stop/start work more smoothly.

A coasting function can also turn off the engine when loads are low between 25 km/h and 160 km/h to help save fuel. This would be helpful while driving down a hill, for example, where a driver could use momentum to move forward and not engine power.

The most obvious visual tweaks can be seen in the slimmer adaptive LED headlights, larger grille, new L-shaped taillights, and new tailpipe finishers. The luxury sedan has grown by 30 mm in length. Inside, the refreshed 5 Series gets a larger 12.3-inch touchscreen (up from 10.25 inches) to complement the 12.3-inch digital instrument display. Navigation, Apple CarPlay and Android Auto are included, though it’s not clear if the smartphone connection is enabled wirelessly. The nav system has also been upgraded with more accurate real-time predictions and traffic information.

The 5 Series also gets a new system called Drive Recorder, which uses the car’s various cameras to capture video and store it to be watched later. We are seeking more details on how this works, particularly if it might be used like a dashcam or like Tesla’s Sentry Mode, which activates when it detects movement when parked.

Specific to the 2021 BMW 530e xDrive plug-in hybrid, the sedan gets a 40-hp increase over previous models and gets a new feature in Sport mode that allows for 10-second boosts of 40 hp when the throttle is matted. With this new feature, the 530e xDrive can make the sprint to 100 km/h in just 5.8 seconds.

All BMWs also now feature the German brand’s latest turbocharging technology and an optimized eight-speed transmission with improved response and efficiency. The transmission uses navigation data and information from the adaptive cruise control’s radar sensors to help make smarter gear changes depending on the situation.

Those same sensors and cameras power 3D graphics in the nav system that show other vehicles on the road and highlight which ones are within a critical distance. “Graphics indicate maneuvers which can be carried out with the help of the assistance systems,” BMW said in a press release. “This ensures the driver has an overview of the situation and relevant courses of action at all times.”

The BMW 5 Series also has an optional parking assistant that can automate parallel and perpendicular parking and record the last 50 metres driven below 35 km/h to help you retrace your steps and reverse out of a tight spot.

Production of the refreshed 2021 BMW 5 Series begins in July and will be available at dealerships in August. Pricing will be announced closer to the sedan’s on-sale date. 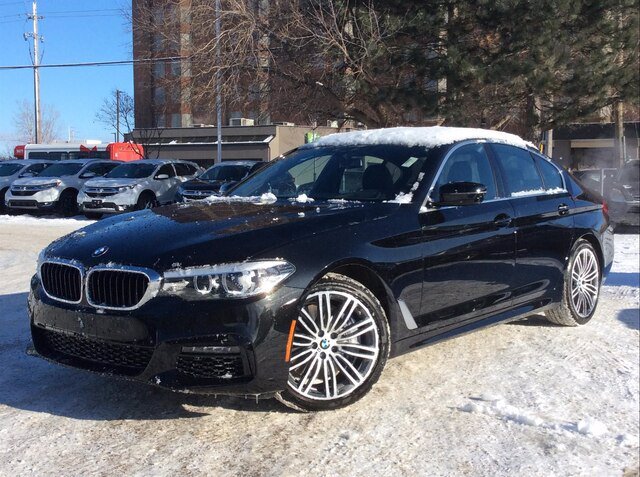 I went to Germany for the driving, and got a history lesson instead