I don’t know what the weather’s like where you’re reading this, but from where I’m writing it – in Ottawa in the second half of November – it has already looked and felt like December for the better part of a month.

Looking on the bright side, at least the weather has put me into a December mindset so I can tell you about the new vehicles that will arrive in Canadian new-car showrooms in time to park under the Christmas tree. Honda rolled out its updated CR-V early last month, but didn’t reveal the changes in time for us to include them in November’s What’s New round-up. Nevertheless, we’d be remiss if we didn’t mention the updates to one of Canada’s most popular vehicles.

This is a mid-cycle revision to Honda’s fifth-generation compact crossover, introduced in 2017. There are two new Canada-only trim packages: Sport replaces EX in the middle of the range, and the new range-topper is the Black Edition, which boasts perforated leather upholstery, black woodgrain interior accents, and trim-specific 19-inch wheels.

The CR-V’s cabin gets a new console with better storage, and wireless smartphone charging at the top of the range.

Honda has expanded its suite of active safety features to the LX-2WD trim, the only one previously unavailable with those driver assists. A heated steering wheel shuffles down to the new Sport trim; before now, it was limited to the pricier EX-L and higher.

As before, all CR-V trims use a 190-hp turbocharged engine and a continuously variable automatic transmission; AWD is standard in all but the entry-level LX. Fiat Chrysler Automobiles’ light-duty EcoDiesel engine is new for 2020, after the first-gen version disappeared quietly in the wake of emissions cheat accusations that sounded familiar to many fans of a certain German car maker.

While the new 3.0L V6 turbodiesel is already on offer in the Ram 1500 pickup truck, this month marks its arrival under the hood of the four-door Jeep Wrangler Unlimited as an option to its four- and six-cylinder gassers. Notably, this is the first time Jeep has offered a diesel Wrangler in North America.

Torque is a valuable asset in off-road driving, and the new Wrangler EcoDiesel suffers no shortage, with 442 lb-ft on tap, along with 260 hp. The new engine is matched with an eight-speed automatic transmission customized to take advantage of the diesel’s power delivery.

Jeep hasn’t published fuel consumption estimates for the Wrangler EcoDiesel, but this engine makes big promises in the Ram pickup, whose 4WD diesel model is rated at 11.1/8.0 L/100 km (city/highway). Assuming similar or slightly better (lower) ratings for the same engine in the Wrangler Unlimited, an adventurous driver could do about 1,000 km of highway driving before the 81 L tank runs dry.

As we write this, Jeep hasn’t set pricing for the Wrangler Unlimited’s diesel option, but we don’t expect it to be cheap: the Italian-made engine adds between $3,900 to $5,800 to the price of a Ram 1500 pickup. Hyundai has made a mid-term refresh to its trio of Ioniq electrified cars for the 2020 model year, centered around an Ioniq Electric that adds driving range, and styling revisions and new features for the car’s hybrid and PHEV variants.

The Ioniq Electric adds about 75 km of promised driving range (for 275 km total), faster charging, and a bit more power. It also gets new front-end styling that plays up the solid fascia allowed by the lack of a radiator. Ioniq Hybrid and Ioniq Electric Plus PHEV models get a new mesh grille, and all Ioniq variants are fitted with new LED exterior lighting, bumpers, and wheels.

The standard infotainment screen stretches an inch to 8.0 inches, and trims with navigation get a 10.25-inch display. Some trims also add a driver attention warning to Hyundai’s SmartSense safety suite, and wireless smartphone charging is a new option.

The Ioniq’s updates bolster the Hyundai Motor Group’s position as a big player in the EV marketplace. Still, the Ioniq Electric’s capabilities pale next to the Hyundai Kona Electric’s 415 km range, and the 383 km promised by electric versions of the Kia Soul and Niro. However, Hyundai is keen to point out that the updated Ioniq Electric out-ranges the base Nissan Leaf.

Hyundai Canada says the first Canada-bound 2020 Ioniq models are on their way here as you read this and should begin arriving in showrooms before the end of the year. Pricing will be announced closer to the car’s on-sale date. Cadillac is in the midst of redrawing its sedan strategy, which will see it roll out two new models in short succession, starting with the mid-size CT5 by the end of this year and the compact CT4 in early 2020.

Those two cars will replace the small ATS and mid-range CTS, and slot below the existing CT6, at least until sometime in 2020; Cadillac had planned to kill that larger model this year, but then extended production despite annual sales that topped out at a few hundred in 2017 and have only fallen since.

Obviously, Cadillac hopes the CT5 will do better. When it arrives, it will follow the brand’s new “Y” trim strategy, in which two up-level trims both build directly on the base model with unique features and styling changes designed to appeal to different audiences.

In addition to those three trims, the CT5 will wear 350T and 550T designations that call out what’s under the hood. Those numbers represent the metric (newton-metre, or Nm) torque output of the available turbocharged 2.0L four-cylinder and 3.0L V6 engines. In more common terms, those engines will make 237 hp/258 lb-ft and 335 hp/400 lb-ft, respectively. Both engines will come with a 10-speed transmission and rear-wheel drive, but AWD will be an option in any CT5 configuration.

There will also be a speedy CT5-V, which may end up being the only way to get the V6 motor. Performance-wise, it will be a long way off the wild, 600-plus hp of the old CTS-V.

Cadillac will reveal the CT5’s pricing closer to its market launch. We’re lumping the Giulia sedan and Stelvio crossover together because, while they’re aimed at different buyers, Alfa Romeo’s 2020 model year improvements apply equally to both.

The bulk of the changes are found in the cabin, where driver and front passenger enjoy a new centre console and leather-trimmed shift lever, an aluminum-look infotainment dial, a new steering wheel, and a dedicated smartphone storage bin with wireless charging.

Other tech additions are a Wi-Fi hotspot, a smartphone app that connects to the car remotely, a vehicle finder, stolen vehicle locator, and over-the-air software updates for some in-car systems.

Both models get new paint options, and the Stelvio gains a couple of appearance packages that bring fender flares and other trim bits, and there’s a carbon fibre package, too.

Both models carry over mechanically with a standard four-cylinder turbo engine, and a high-performance Quadrifoglio package with a 505-hp turbo V6. The 2020 Porsche Macan Turbo is set to reach showrooms by the end of this year as the latest version of the second-gen compact crossover that debuted for 2019. In typical Porsche style, the new Macan Turbo doesn’t look much different than the outgoing car, but the Stuttgart-based company says there’s more to it than meets the eye.

The two turbos are nestled in the V between the engine’s cylinder banks, where their closer proximity to the combustion chambers helps eliminate turbo lag.

While the styling differences are subtle, the Macan Turbo is set apart from lesser variants by a trim-specific front fascia with larger air intakes, standard adaptive LED headlights, sport side skirts, a double-wing rear spoiler, and a sport exhaust with twin silver tailpipes. 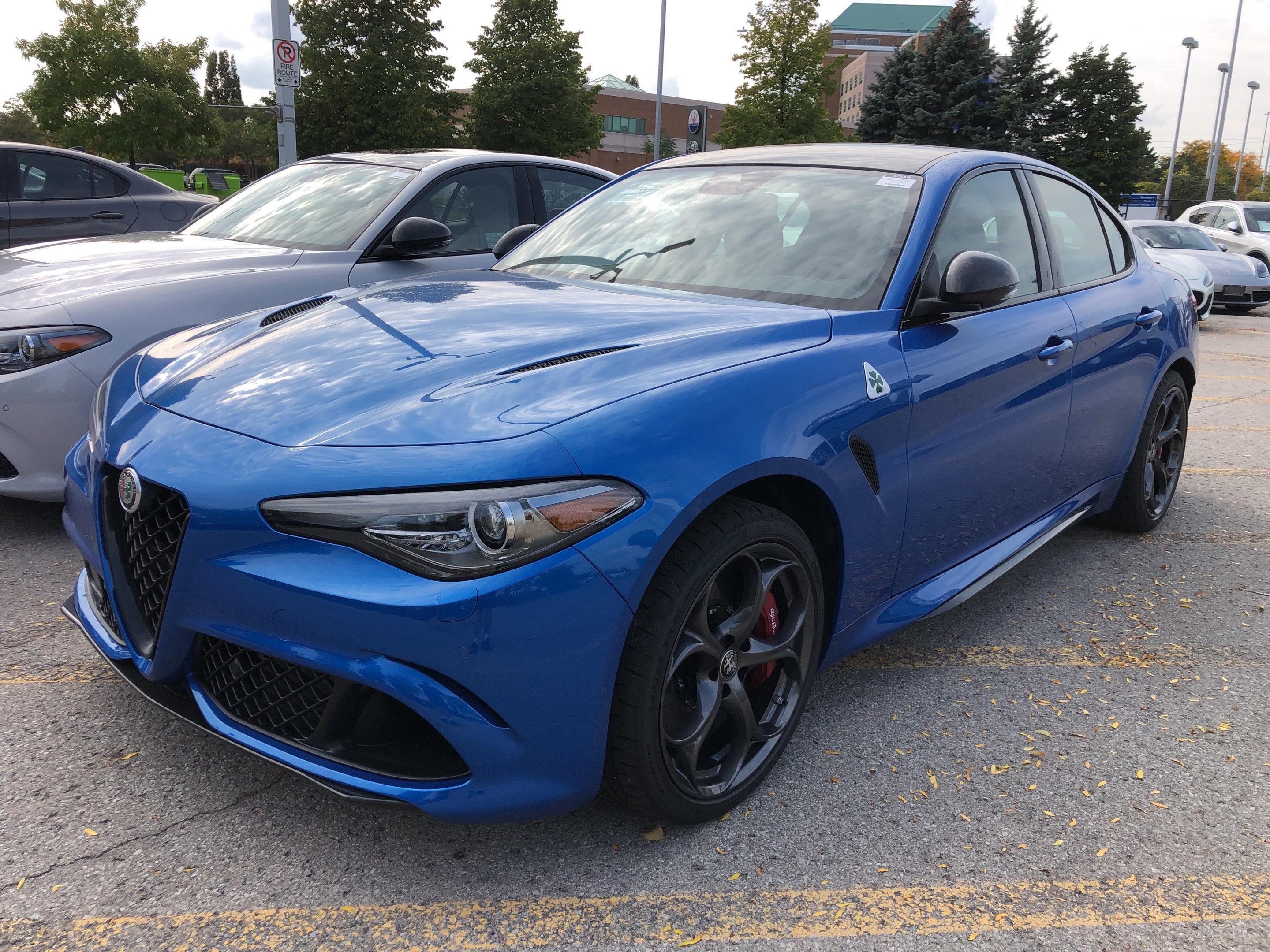