This is one of those times.

It's a 2007 Mercedes-Benz R-Class, but one that has received a big dose of vitamin HP thanks to a factory-installed monster V8. It's the R 63 AMG, and it's our autoTRADER.ca Find of the Week.

The R-Class from Mercedes-Benz was always a bit of an odd duck. It was first shown in 2002 as the Vision GST concept. For Canadians who already have enough visions of the GST, this time it meant Grand Sports Tourer. This was still the early day of the SUV. Even though Mercedes had helped pioneer the luxury sport ute with the M-Class, they weren't quite sure where to go next. It wouldn't take long before every body shape got an SUV version, but this was in the time where the SUV-coupe wasn't yet in the design pipeline. This one really was a crossover. But not between car and SUV. This was more of a crossover of a minivan and an SUV. Mercedes called it a Sports Cruiser, then a Family Tourer.

With the R-Class, you got a lot of vehicle. Three rows of seats, for a start. Room for six passengers in comfort. Lots of tech, too, with just about every add-on that Mercedes had in the roster in 2006 available. Loads of room for stuff. With 430 litres behind the third row, or up to 2,406 with all the seats folded. There's also a lot of weight here. An R-Class tips the scales at around 2,300 kg.

The mid-2000s wasn't just the start of the SUV craze, it was also the time when Mercedes-Benz started going all-out on the AMG brand. The tuning arm of Mercedes-Benz had only just become fully part of the parent company in 2005, and they were going full-speed ahead on handcrafting some amazing powertrains.

AMG had only just started building its own engine instead of hopping up Mercedes-Benz ones, the new massive V8 the first powerplant designed completely in-house. The engine launched for 2007 in the CLK coupe, the CLS four-door, and the E-Class. So why not put it into the R-Class too?

Using a seven-speed automatic tuned by AMG for faster shifting and all-wheel drive, the R 63 could hit 100 km/h from a stop in under five seconds. With six passengers and Alcantara-trimmed sports seats. It even had a built-in lap-timer in the navigation system in case you decided to take the whole family along on a lapping day. Actually, that does sound like a fun idea. AMG made more than just engine changes to make this family hauler a nightmare to sports cars. Massive 15.4-inch brake rotors in the front with dual-piston sliding calipers. The suspension was also upgraded for AMG-duty with new tuning for the pneumatic adaptive dampers. It also had driver-selectable ride height to let the driver raise the vehicle 3.1-inches or have it lower at highway speeds. The 20-inch wheels, still somewhat rare at the time, wore performance tires to keep things in check. 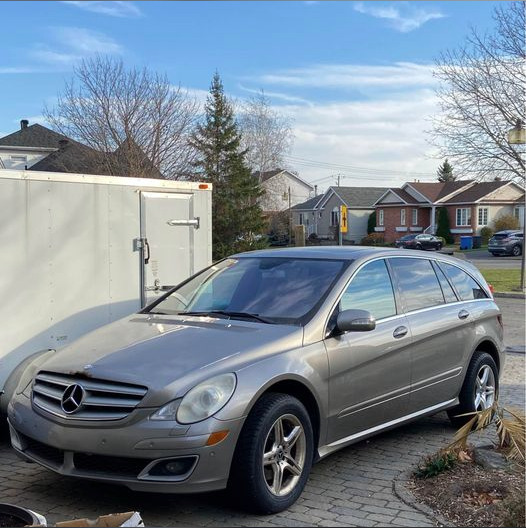 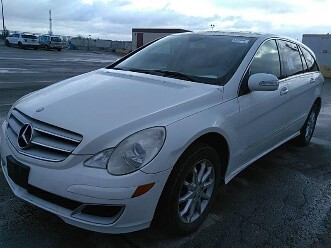 It made for one of the most extreme people-carriers ever to roll out of a major automaker's showroom. But for the R 63, it was a case of guess you guys aren't ready for that yet...but your kids are gonna love it. The R 63 lasted for just one year of sales. 2007. We don't have exact production figures, but various sources put total US sales at under 80 and Canadian sales at around half a dozen.

But today, now that it's no longer a $100,000 oddity, they are growing in popularity. This one, for sale in Hamilton, has around 220,000 km on the odometer. It's not exactly low mileage, but in a vehicle this absurd, with this much power, it must be hard to let it just sit in the garage.

It's a hand-built V8 with more than 500 hp in a vehicle that seats six but looks almost completely anonymous. Unless you know to check out those big quad tailpipes, huge brakes and 20-inch alloys. It's a 2007 Mercedes-Benz R 63 AMG, and it's our autoTRADER.ca Find of the Week.