How the Ford GT Came to Be Designers create a small-scale mock-up of the Ford GT

Designers create a small-scale mock-up of the Ford GT
https://www.autotrader.ca/ Various designs are rendered before a final one is determined

Various designs are rendered before a final one is determined
https://www.autotrader.ca/ The GT was rendered in foam and clay during its development

The GT was rendered in foam and clay during its development
https://www.autotrader.ca/ How the Ford GT Came to Be

DEARBORN, Michigan – The basement in Ford’s Product Development Center in Michigan is a gloomy place. It’s used mostly for storage, the halls lined with stacks of modelling foam and windshield moulds.

You don’t come down here unless you have a reason to visit. And that made it the perfect location for a very special studio: the “secret lab” where the Ford GT was born.

A small team of designers and engineers worked on the supercar in this windowless studio, hidden until the day the final model was revealed to company executives.

“This is a big company, and it’s easy to change priorities,” says Chris Svensson, design director of The Americas. The project could have been killed at any time, and that’s something Svensson didn’t want to happen. 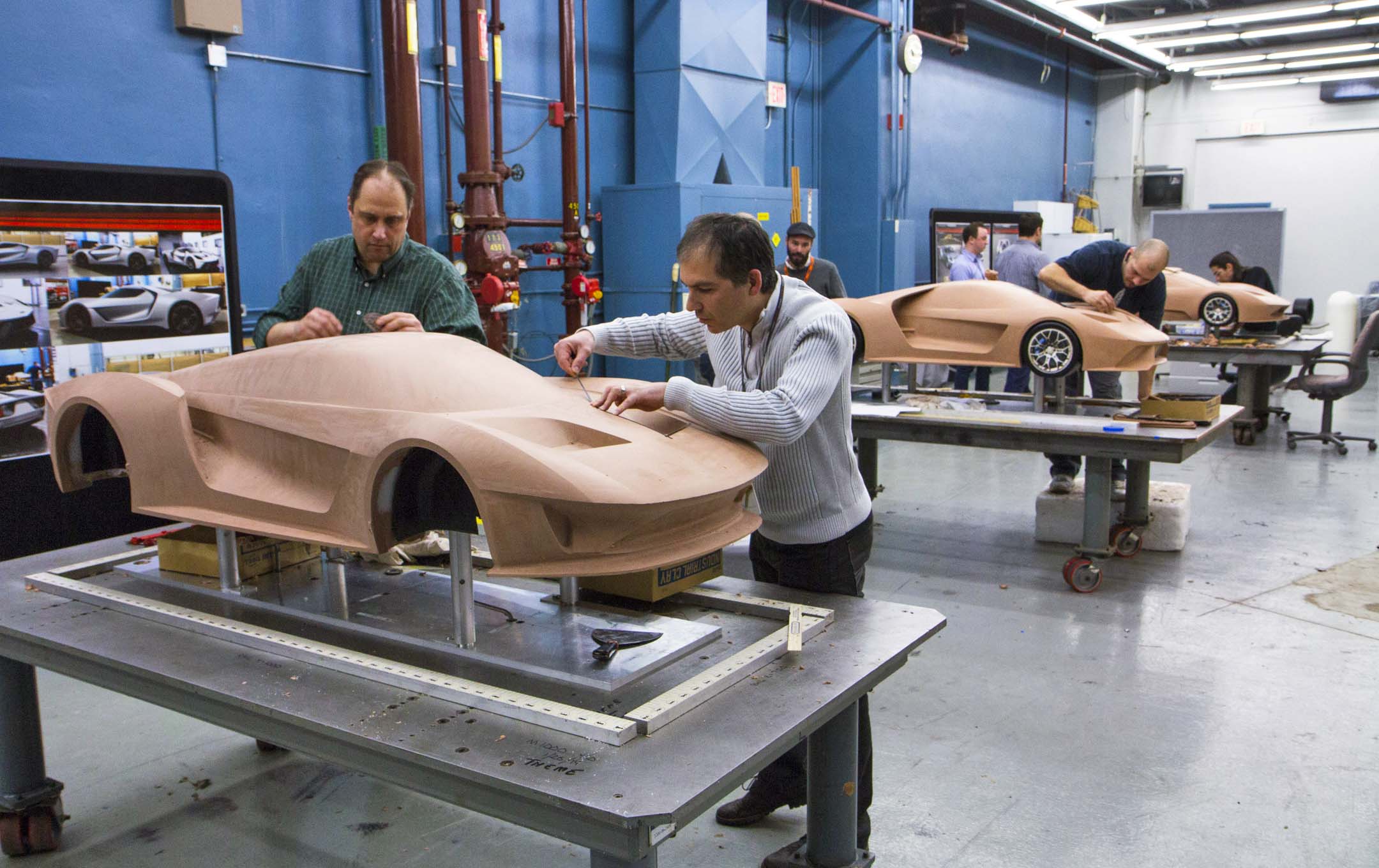 Various designs were rendered before a final one was determined

“This was probably the most secretive of all Ford projects,” he adds, pulling a key from his pocket. Every other studio door opens with a swipe card, and if you’re not supposed to be inside, your card doesn’t work. But Svensson knew that Bill Ford and Mark Fields, chiefs of Ford at the time, had cards that could open anything. A new swipe machine, attached to what had been an out-of-commission milling machine room, might have attracted attention. Instead, Svensson went old-school, leaving the lock on the door and issuing keys to the team. Will he have his gold-plated as a memento, I ask? “No, but I should sell it on eBay,” he jokes.

Back in 1966, Ford defeated Ferrari with its GT40 at the 24 Hours of Le Mans. The company wanted to do it again for the 50th anniversary, and work began on a modified Mustang. But it was expensive and the aerodynamics were tricky, and the project was cancelled. A disappointed Raj Nair, executive vice-president of product development, was determined to make it happen anyway. And if the execs didn’t know about it, they couldn’t shoot it down. 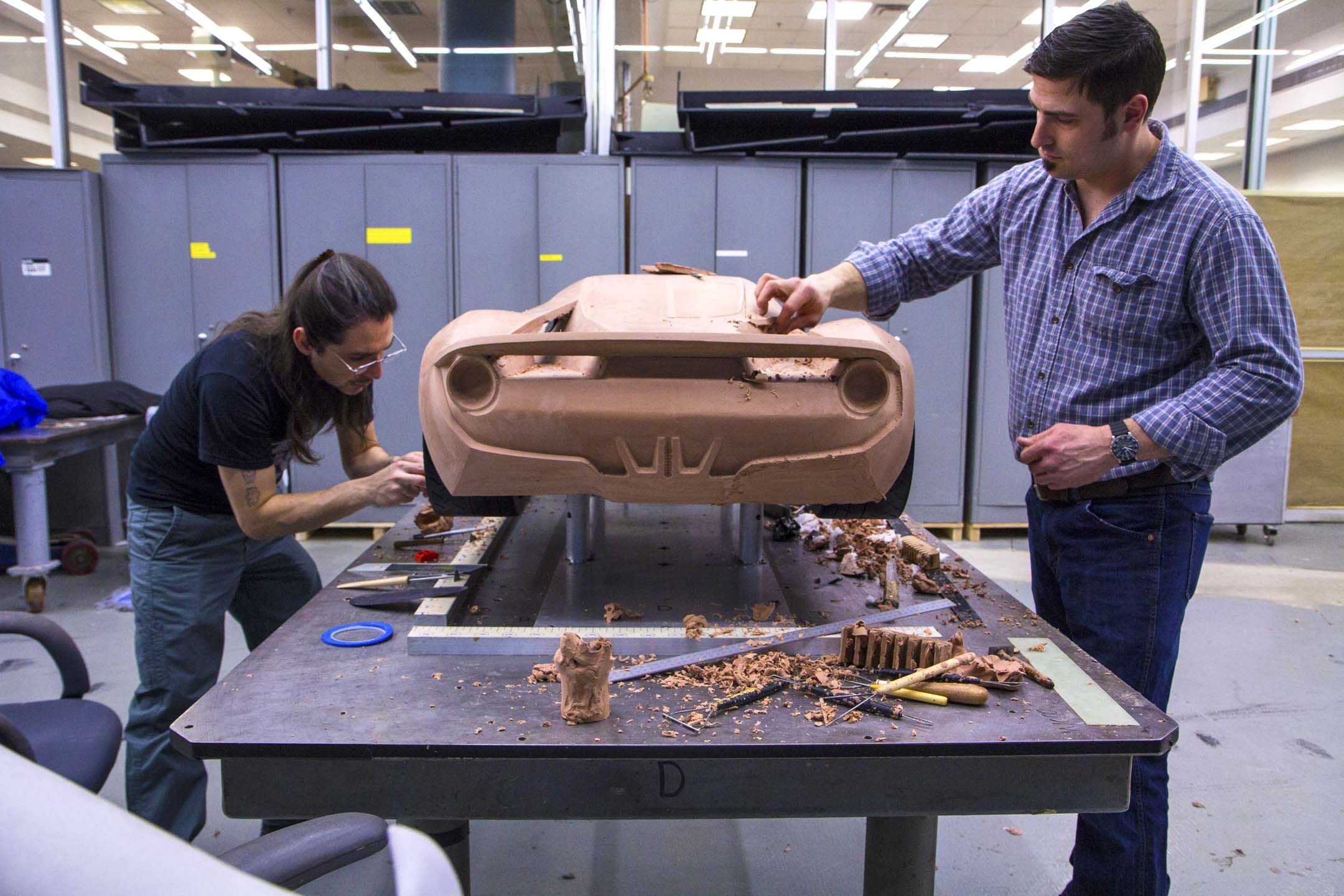 Designers craft a small-scale mock-up of the Ford GT

“We had a bandwidth of ideas,” Svensson says, showing off a storyboard of various initial sketches. “We had the next-generation 1965 car but with updates. We had performance efficiency, which we benchmarked against other race cars. And the third idea was ‘modern seduction’. But when we showed them to Raj, he said it had to be a combination of all three ideals.”

The secret work began. Many participants couldn’t just disappear from their regular tasks, and so everyone met once a week, starting at 8pm when Nair was off the clock, and ending in the wee hours. “We went to the same hotel each time, and they’d keep the restaurant open for us,” Svensson says. The meetings included technical advisors from Multimatic, the company that would actually build the GT in Markham, Ontario. 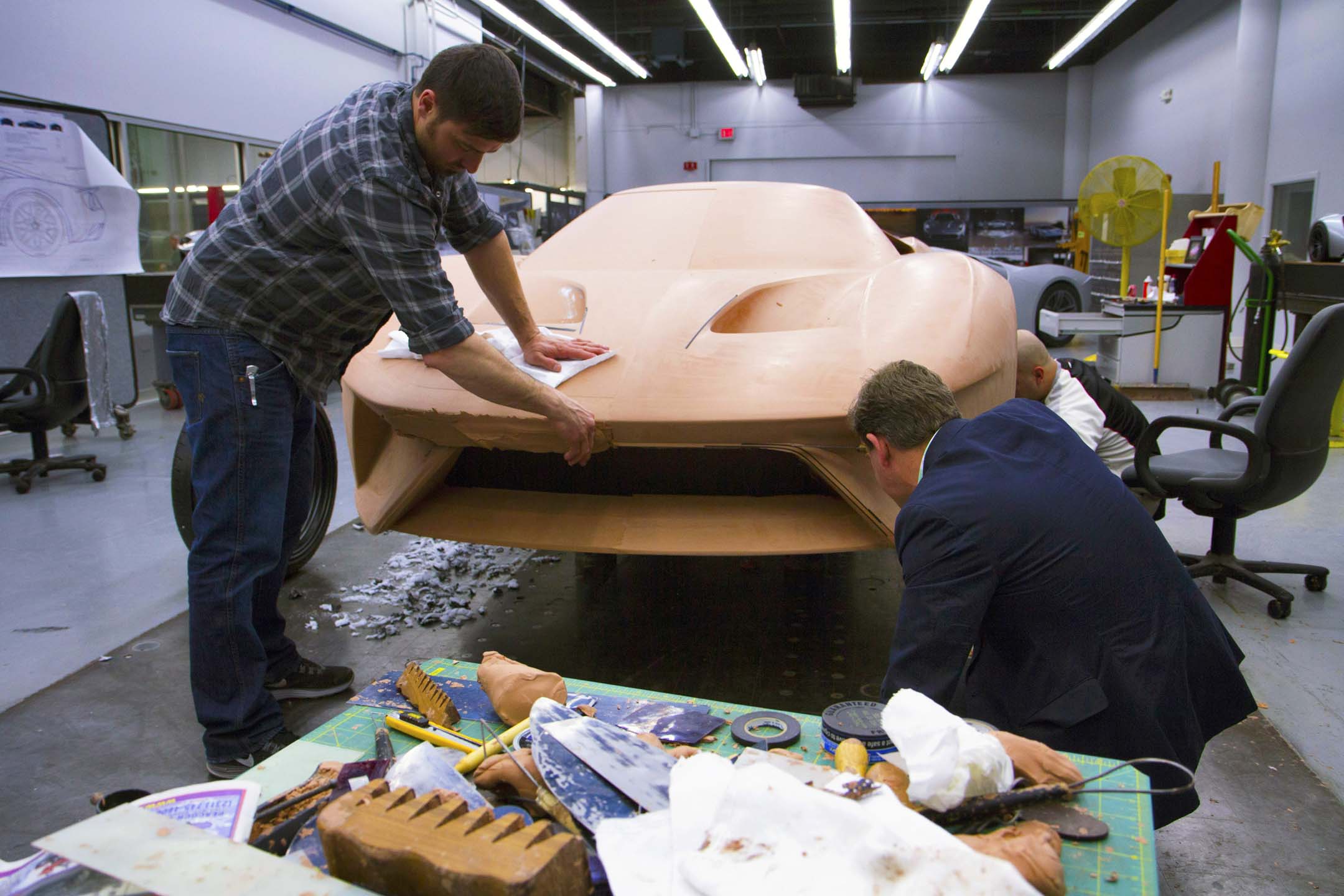 The GT was rendered in foam and clay during its development

The task was even more difficult because certain development milestones had to be met to qualify for competition. While racers are often derived from production cars, there wasn’t time for that. Instead, competitive and consumer versions were developed simultaneously.

Three full-size foam models illustrate some of the issues. All have different sides and sills. Svensson preferred the look of a straight side, but a trip to the wind tunnel revealed its inefficiency. The race took priority, and so performance was the most critical factor.

The roll cage was engineered into both the Le Mans and street models to speed the process, and only some extra bracing differentiates the racers. It became a bonus: owners can take their cars on virtually any track out of the box, since the cage is already there. The seat can’t be moved, because a fixed chair allowed a flatter, more aerodynamic windshield that wouldn’t have been possible if the seat could be moved closer to the glass. The pedals and steering wheel adjust instead to accommodate differently-sized drivers. 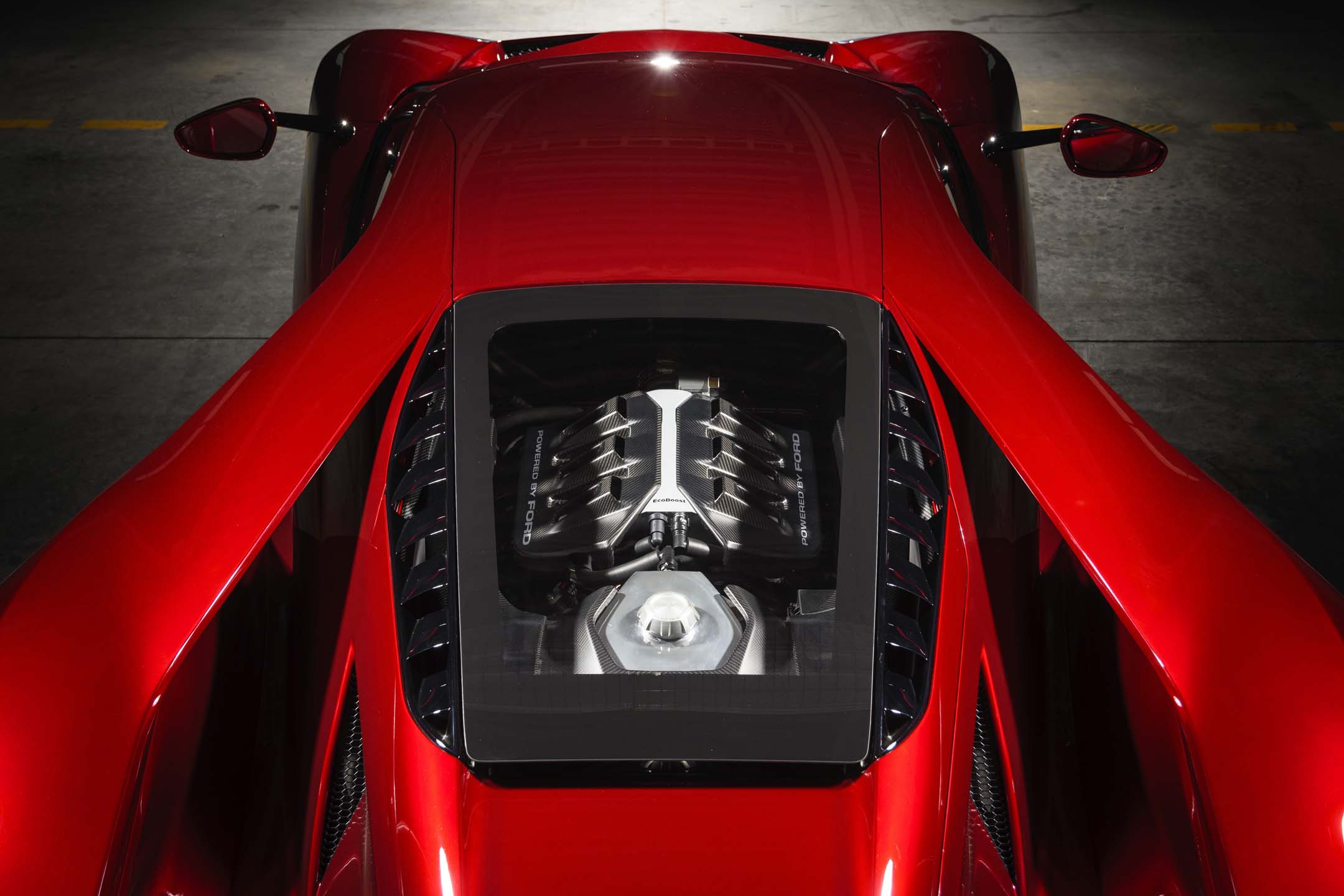 The design directive was to ‘wrap’ the car around its engine

Despite the team’s focus on a race-ready car, Ford is still a mass-production automaker, and something practical had to come out of the project. To that end, the company says the lessons learned will pay off with future vehicle aerodynamics, anti-lag turbocharging and fuel injection, and how to better work with lightweight materials, since the GT is made of carbon-fibre panels bonded together, rather than formed as a one-piece tub.

Driving the car on the automaker’s proving grounds would have spoiled the surprise. Instead, it was tested at Calabogie Motorsports Park, a middle-of-nowhere track near Ottawa where prying eyes weren’t as much of a concern.

A final clay model was painted to look like the real thing, and that’s what Ford’s execs first saw when they were finally invited in. That model became the panel mould for the concept driven onstage at the North American International Auto Show in Detroit in 2015. And at the 2016 Le Mans, the GT took its class and, in that 50-year anniversary match-up, once again defeated Ferrari. 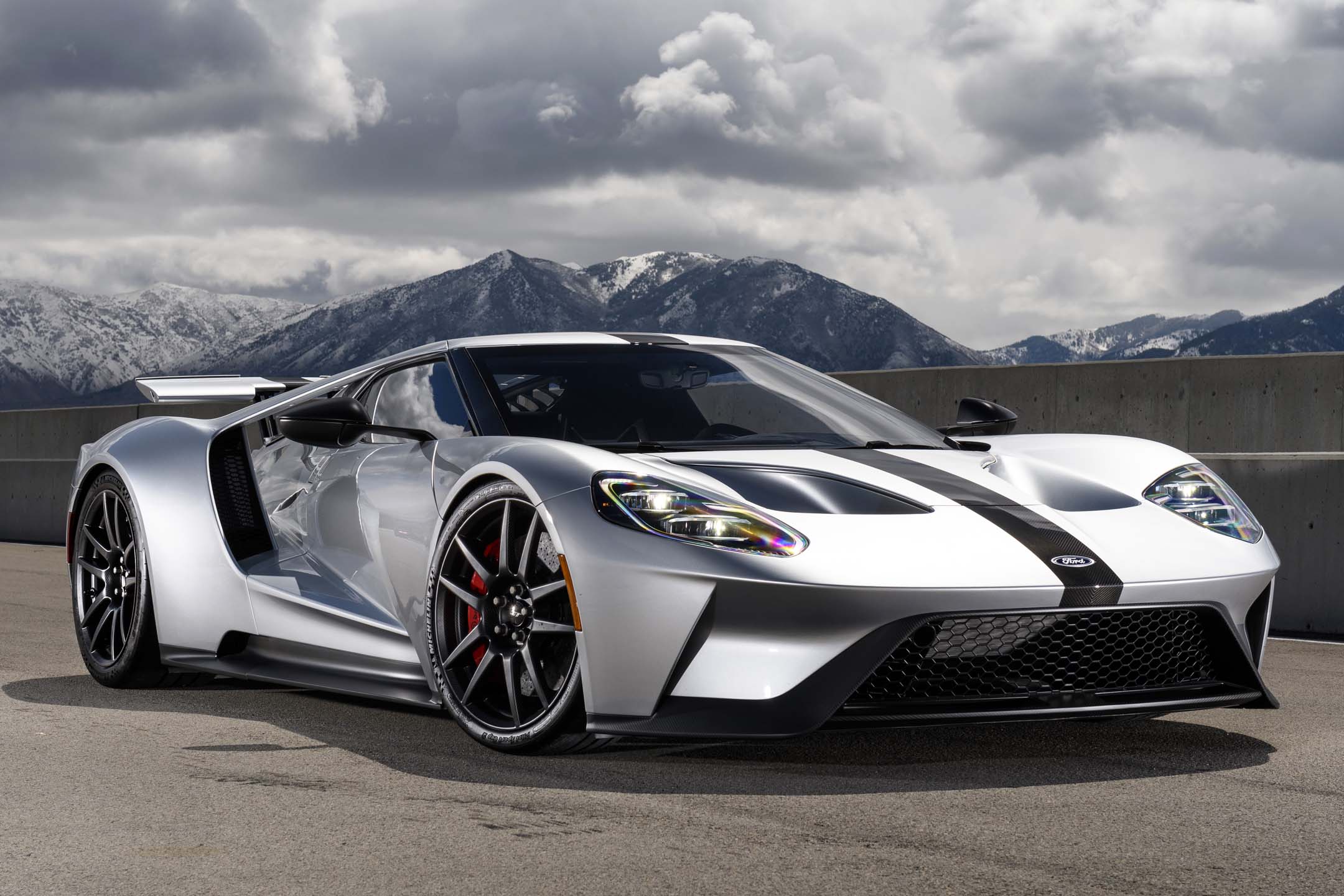 In creating the all-new high-performance Ford GT, the pioneers behind the supercar designed it not only to win races but also to serve as a test bed for new technologies and ideas for future vehicles across Ford’s vehicle lineup.

What’s truly amazing is that, in total secrecy, the team took the GT from first sketch to turning wheels in just two and a half years, a very short span for any all-new vehicle and especially for one like this.

Work in the basement studio is finished. It’s now outfitted with the sketches and models, along with a display of available finishes and materials. Buyers come to tour the room and then make the paint and leather selections for their cars. The clock is ticking, though, as the old Product Development building will be demolished and a new one built. While nothing is set in stone yet, Svensson says the GT studio may be relocated as a permanent exhibit in the Henry Ford Museum across the street. One of Ford’s most secretive projects might ultimately go from a clandestine operation to a very public display.