Vikram Vij is one of Canada’s top chefs and restauranteurs. He created an Indian food empire in this country, owning a string of successful restaurants in BC, food enterprises, and cookbooks with his business partner and former wife Meeru Dhalwala. But the celebrity chef isn’t just heating it up in the kitchen. He has had several stints on TV, appearing on Top Chef Canada, Chopped Canada, and CBC’s hit series, Dragons’ Den, as the first ever Indo-Canadian Dragon on the show. He just released his autobiography called Vij : A Chef’s One-way Ticket to Canada with Indian Spices in His Suitcase. Despite his success, Vij remains modest and down-to-earth. In fact, he has only owned three cars in his life, including his current ride: a 2016 Audi A5 Coupe.

Petrina Gentile: “Why did you go with an Audi?”

Vikram Vij: “Audis are very elegant and understated. They are beautiful. The difference between an Audi, BMW and Mercedes is that when you drive a BMW or Mercedes it says I have money. You put it on your sleeve. When you drive an Audi it says I’m understated and quiet. I like good engineering. Hence my Audi A5. A7 is too much. I don’t need a fancy car. I still want to be environmentally friendly. I want to have a car that’s not a gas-guzzler. I would never drive a V8 because I don’t need it. My testosterone levels are normal. I don’t need to be gunning it anywhere. I’m not looking to turn heads because of my car. I want to turn heads because of who I am as a human being and what I’ve done. I don’t want people to say, he drives a fancy car. I want people to say he changed the way Indian food is perceived in this country.”

VV: “It would be my own slow-cooked goat meat at My Shanti restaurant because I braise it with a lot of love, lots of spices, and a lot of elegance. But at the end, when you eat it you’re like, whoa! It’s full of flavour and spice, similar to what my Audi is. Everything is there. You don’t need anything else.” 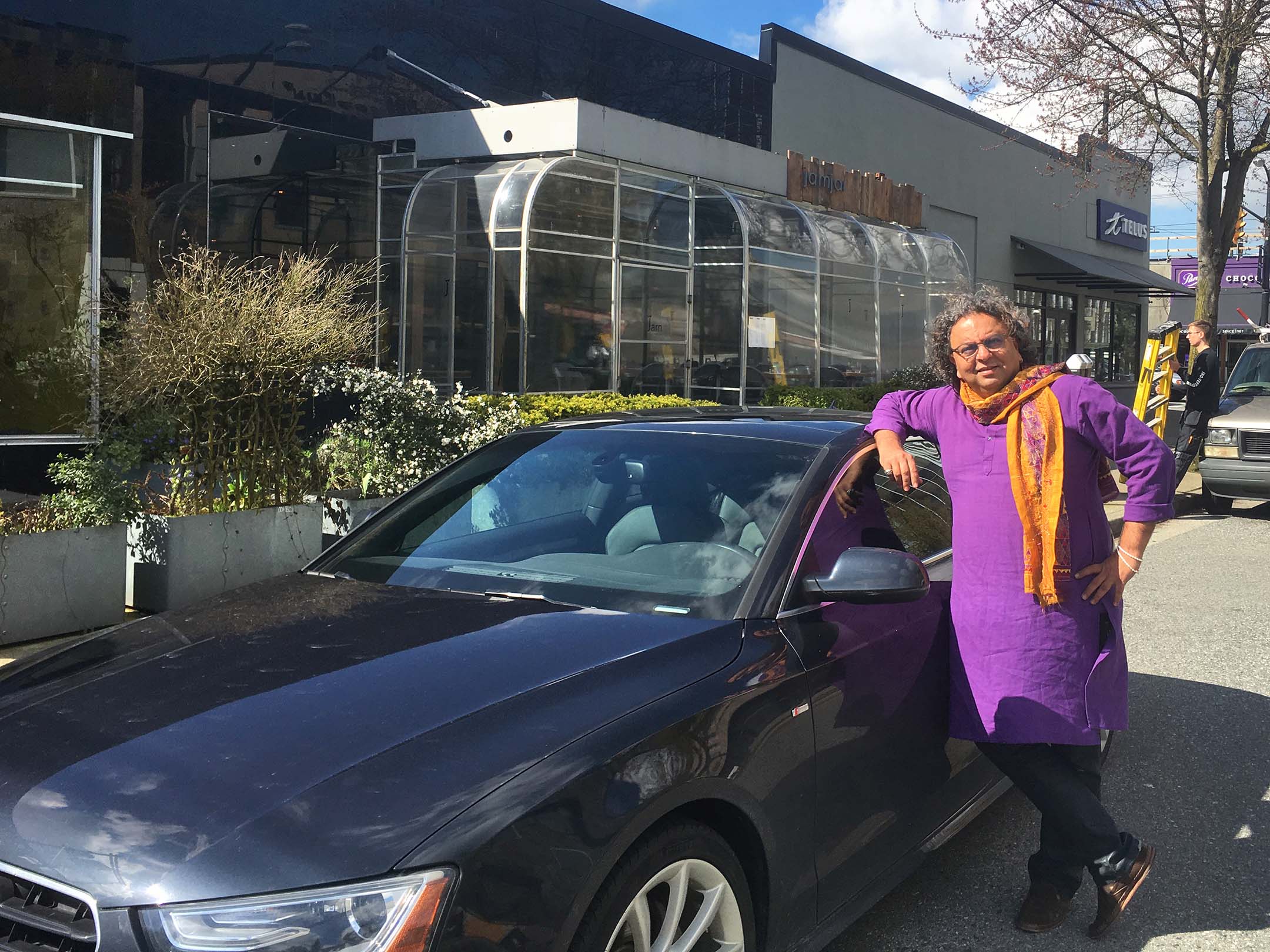 VV: “I’ve always been a big fan of German cars and German engineering. My first car was a Volkswagen Jetta and I loved that car…I worked at the Banff Springs Hotel and I had gotten into a huge argument with my girlfriend at the time. She did not want to drive me from Banff to Calgary so I got really mad and I said I’m going to buy myself a car and I’m never going to be dependent on you. I rented a Moped. I put on a helmet and I drove on Highway 1 from Banff to Calgary, which is around 110 kms, on the side of the road. These trucks would go by and I would shake on the side of the road. They would honk at me, are you nuts? I could have died – I could have been road kill!

I drove from Banff to Calgary to pick up this car. I had $15,000 cash that I had saved. I gave it to the sales guy and bought the car. After I bought the car, he says ‘Give me your driver’s license.’ I didn’t realize in Canada if you have a learner’s license you cannot drive your vehicle on your own unless there is someone in the car. In India, I drove my cars without a driver’s license. Because when I was growing up in India every time you got pulled over you would just give the cop five rupees or five bucks to let you go. It’s called bribery. So I didn’t understand this. He said, ‘Sir this is a learner’s license. You can’t drive.’ I said tomorrow morning I’m getting my test done and I’ll pass so let me drive. He said ‘I cannot legally allow you to drive.’ So I got onto that Moped and came back to Banff at 8 o’clock at night. My face was so cold and tired and exhausted. I came back home and the next morning they came to deliver my brand new 1992 Jetta. I went for my test and I failed it.”

VV: “I was driving through a school zone at 50 km/hr instead of 30 km/hr so I had to wait another two weeks to take my test because the examiner had to come from Calgary to Banff to give the exam because there was not enough population to do it there. Every night when I’d come back from a shift I’d turn the car on and I would sit in it for 15–20 minutes to smell the beautiful, new car smell. I did it for two weeks until I actually got my driver’s license.” 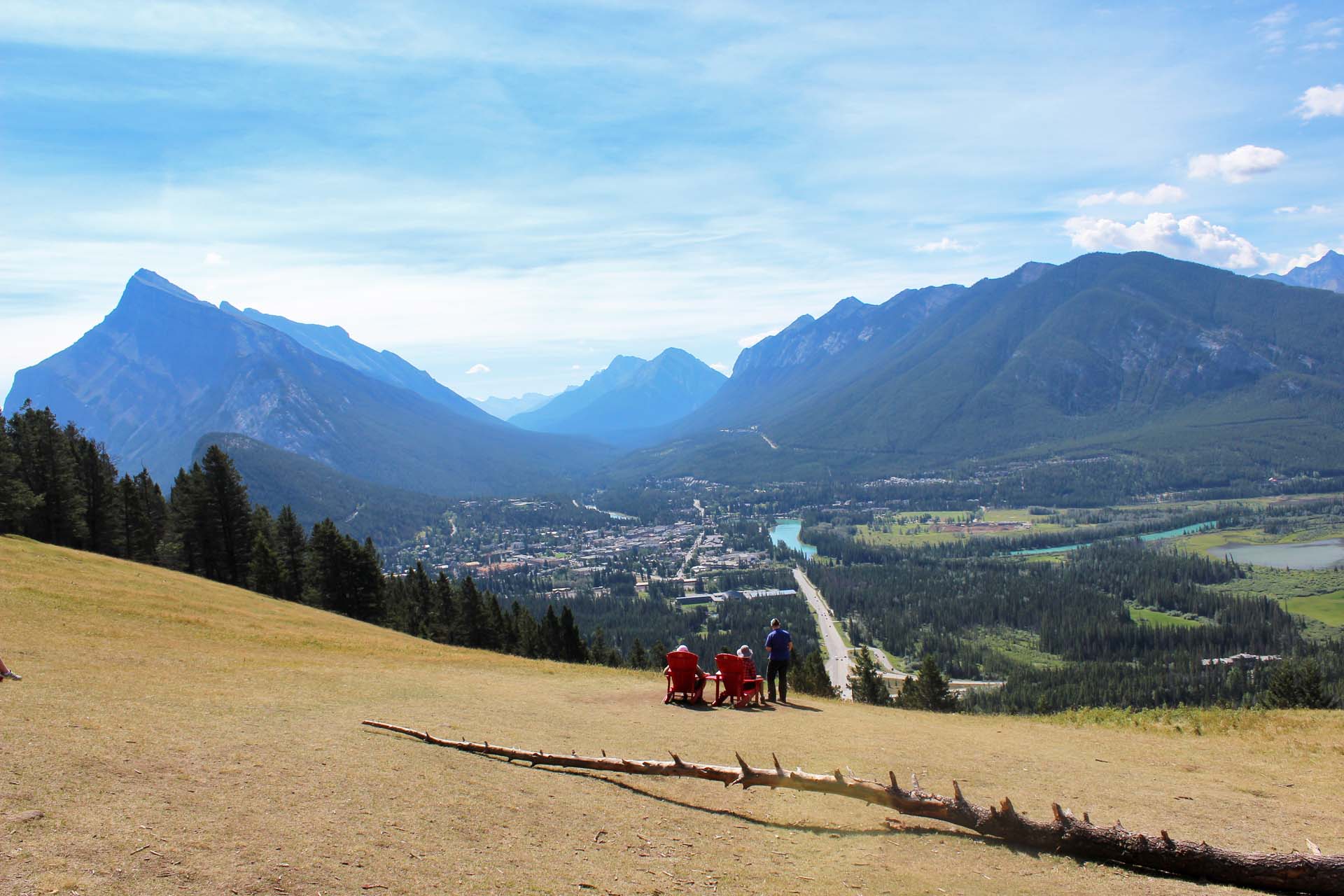 PG: “What’s your best or worst memory with it?”

VV: “I drove that car from Banff to Toronto to meet a woman. Then I got dumped. And then I drove it back. I was listening to all of the famous songs when you get dumped, smoking cigarettes and driving through Medicine Hat and Swift Current, listening to Piano Man by Billy Joel and feeling sad. I had a cassette at the time and the 3,500 km journey completely overran the cassette and by the time I reached Banff the tape was getting stuck in it. It had no more juice left to keep playing the songs over and over again.

“I absolutely loved that car. It was a workhorse. I used to go to Costco with my ex-wife, Meeru, when I was working as a chef at my own restaurant and we would fill it with gallons of milk – completely packed. The car was so heavy on the back that the front tires were not getting enough traction. I drove it until it almost died and then I bought a Prius. I loved that car. It was quiet and good for a family. I still have it.”

PG: “You’ve only owned three cars in your life?”

VV: “Correct. Owned by myself, yes. I’ve only had three cars. I’m a long-term driver. The only thing I’m not long term on is relationships. Relationships – mine fall apart really quickly. Other than that I’m long-term on everything else.”

Notable achievements:
• lived in New Delhi and Bombay until the age of 20, received his chef certificate from the Salzburg Hotel Management School in Austria, and moved to Canada in 1989 to work at the Banff Springs Hotel in Alberta
• became a certified sommelier from the International Sommelier Guild in 2000
• opened Vij’s Restaurant in Vancouver, BC with ex-wife Meeru Dhalwala in 1994, followed by Vij’s Rangoli in 2004, and My Shanti in 2014
• his line of packaged curries, called Vij’s At Home, is carried hundreds of retailers across Canada
• Vij’s foods are also available on select Air Canada flights, BC Place stadium, Rogers Arena in Vancouver and at Whistler/Blackcomb mountains
• awarded The Ernst and Young Entrepreneur of the Year award for the Pacific Region’s Hospitality and Tourism category in 2011
• named Chef of the Year in Vancouver Magazine’s Restaurant Awards in 2015; Vij’s Restaurant also received the magazine’s Best Indian Award in 2015; in 2016, My Shanti won the Gold award in that category.
• My Shanti was named Best New Restaurant by the Globe and Mail in 2014 and Best Restaurant in Surrey, Delta, White Rock and Langley in the 2017 Georgia Straight Golden Plate Awards
• named Surrey’s Business Person of the Year by The Surrey Board of Trade in 2014
• received the Chevrolet Ingenuity Award for exceptional creativity and skill at RBC’s 2015 Top 25 Canadian Immigrant Awards
• TV appearances include Top Chef Canada, Chopped Canada, CBC’s Recipe to Riches, CBC’s Dragons’ Den, and Cook Live With Vikram Vij
• co-author of three cookbooks with Meeru Dhalwala: Vij’s: Elegant & Inspired Indian Cuisine, Vij’s At Home: Relax, Honey and Vij’s Indian.
• received honorary Doctorates of Law from Vancouver’s Simon Fraser University in 2015 and Doctorates from the University of British Columbia in 2016
• opened Vij’s Kitchen, a state-of-the-art culinary learning facility at UBC, dedicated to teaching chefs/nutritionists about ethnic food

About Petrina Gentile
My world revolves around cars! I'm an award-winning automotive journalist who covers cars for the newspaper, online, and TV.
Follow me
AdChoices
Latest Articles