Android Auto and Apple CarPlay are on the scene – and in seemingly record time, these two go-to features for in-car connectivity and smartphone integration have largely rendered automaker-created infotainment interfaces obsolete.

Though some automakers, including Mazda, BMW and Nissan, weren’t on board with these new systems at writing, the list of automakers offering Android Auto and Apple CarPlay is growing – and fast.

“Customers absolutely want these features. The demand comes from them,” says Ron Wong, a Human Machine Interface (HMI) expert at Honda Canada. “The customer is looking for features like these in new cars – and we’re delivering.”

In fact, more and more shoppers are basing their purchase decisions on the availability of these features.

“I was actually set on buying a new GMC Sierra in 2015, but the Apple CarPlay system wasn’t available yet,” said Matt Knutson, a 32-year-old mining engineer in Valley East, Ontario. “I put my purchase off several months until a 2016 model was available, because I decided I needed this feature. It’s made my life a lot easier – so much easier to stay connected on the go. I’m a big Apple user, and I use CarPlay daily. It’s an awesome system.”

It’s a simple concept, really. Rather than use one interface, menu structure, graphical theme and voice command system on your smartphone, and another totally different one in your vehicle, the latest in smartphone connectivity from Apple and Android effectively up-scale the user’s handset into the central command screen. 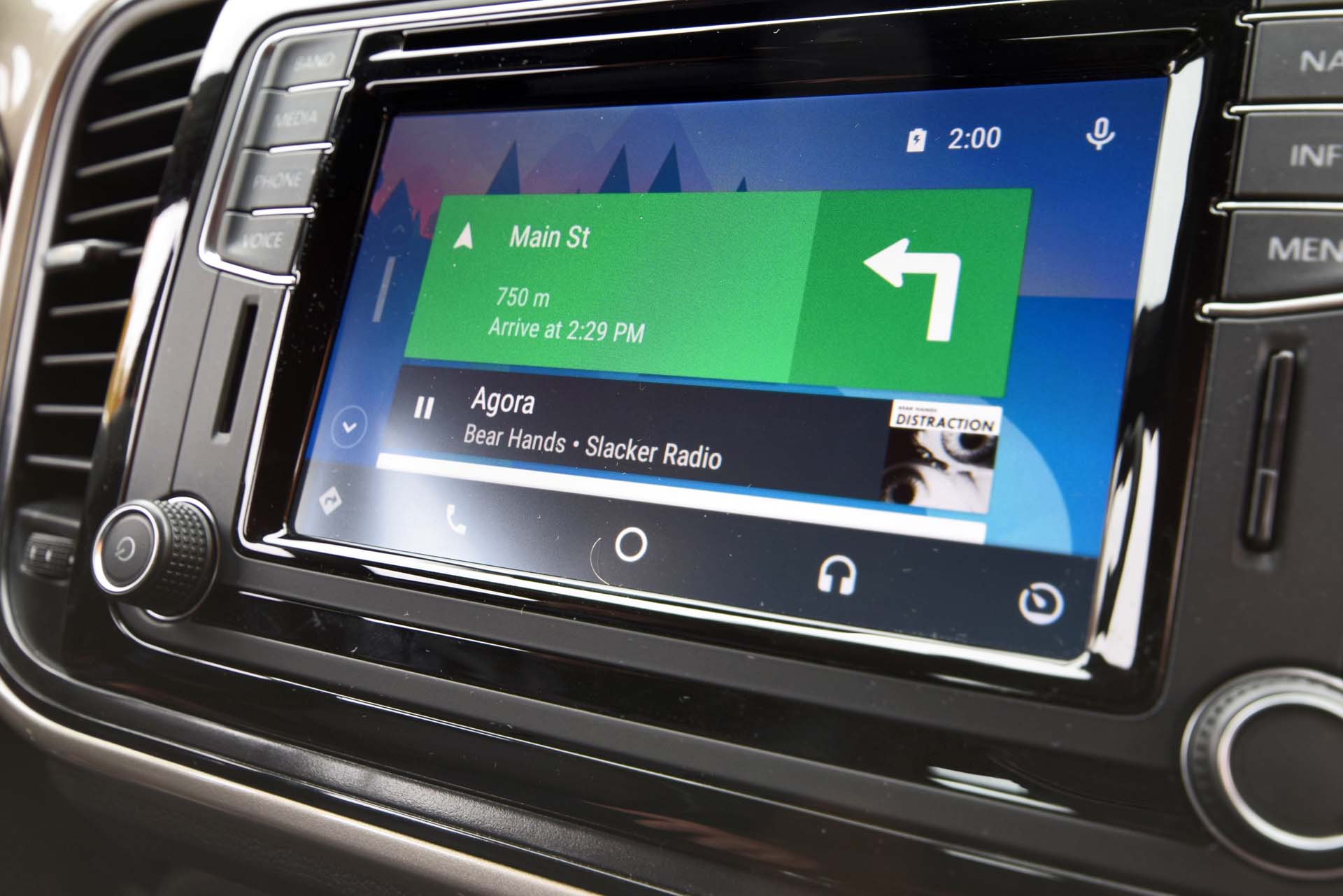 With Apple CarPlay and Android Auto, there’s no need to learn a new interface to access and manipulate media, navigation, contacts, and other functions in your ride. Selected elements of the user’s native handset are displayed centrally in the vehicle dashboard – with the same gestures, menu structures, interfaces, graphics, settings and preferences used from the handset from which they originate. Some vehicle models offer one of the two systems, and many offer both.

Distracting functions are blocked out: you can’t read text messages on screen, browse the web, or watch cat videos on YouTube with Android Auto or Apple Carplay. But when it comes to plotting a course, texting a contact, listening to a playlist, or hundreds of other functions, a simple tap, or voice command, is all that’s needed.

“My favorite feature is the ability to reply to text messages on the go,” Knutson adds. “The voice dictation is excellent, and you don’t have to look away from the road. Just talk. It’s seamless. A real must-have when you have a kid in daycare and need to stay in touch with the wife. It all works great.”

And it’s simple: just pair your phone, plug in the USB cord, and tap an on-screen button, and the system snaps into action. In most cars your writer has tried this system on, you do all of this stuff only once, and then the car-to-smartphone connection is automatic every time you start the engine. And, to keep distraction and temptation to a minimum, you’re not able to use your handset while it’s plugged into the system.

If you’re considering an Apple CarPlay- or Android Auto-equipped ride, here’s a list of five neat-o features that are available at your fingertips, every time you take the wheel. 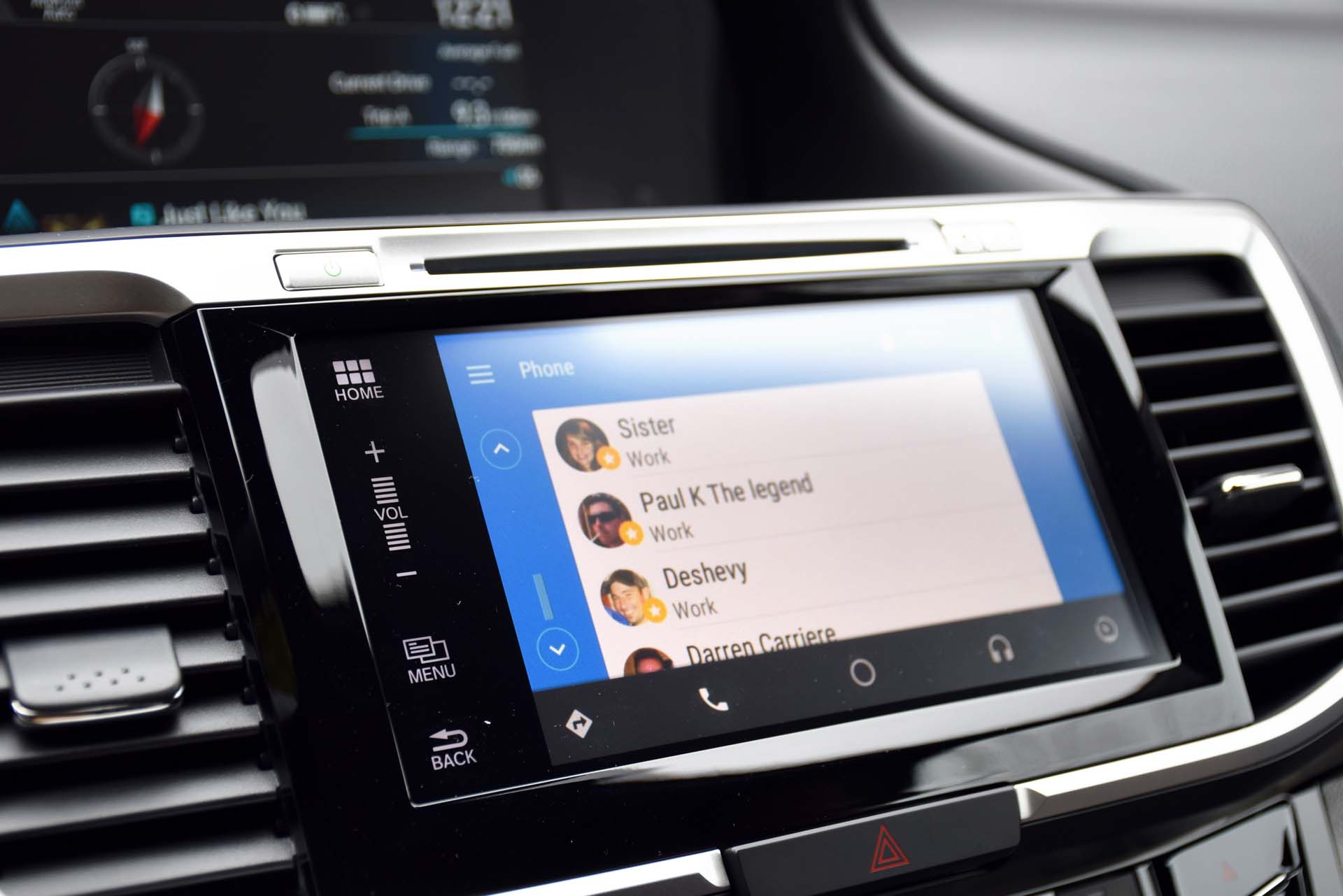 Whether you want the system to read that text message you just received out loud, to store a reminder for later, or to check the local weather forecast, virtually any voice-commanded function available from your handset is available via a tap on the steering-wheel mounted button: just click it and make your request. Siri, or the Talk to Google assistant, can read incoming text messages, set location and time based reminders (like “Remind me to get zip ties next time I’m at Canadian Tire,” or “Remind me to call mom tomorrow at 7:30”), set timers, or even answer questions relating to sports scores, flight times, movie listings, fuel prices, and more. Need ideas for supper? Want to see what’s on TV this evening? Wondering if a lizard is a reptile or an amphibian? Just click, and ask – no need to remove your eyes from the road or hands from the wheel. 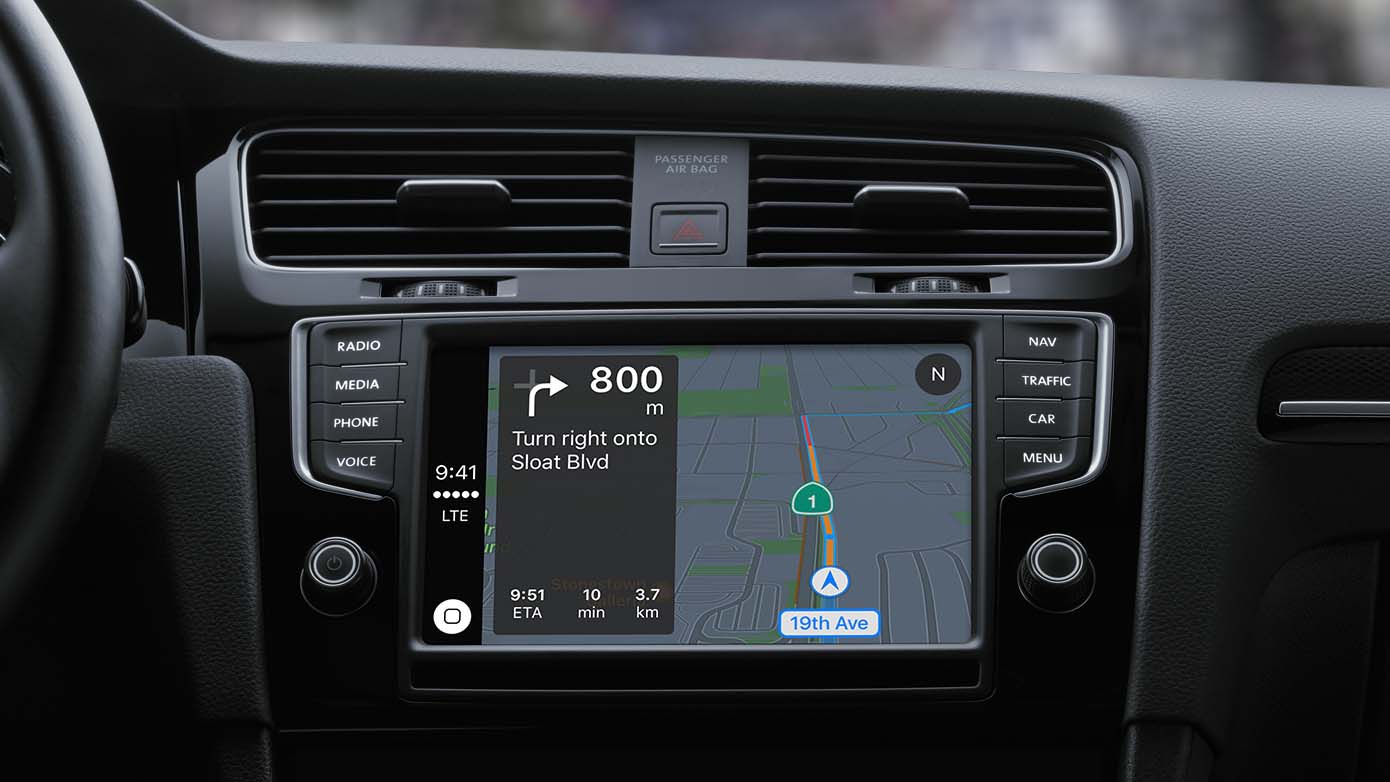 Forget in-car navigation systems with primitive interfaces and outdated maps. Apple CarPlay and Android Auto both use native mapping applications that are updated for free. With the same display parameters and preferences as your phone, your handset map app is displayed on screen – with all of your pre-set destinations, points of interest and favourite locations and settings already on board. Best of all, accurate traffic data is displayed in real time, giving drivers advanced notice of potential setbacks and slowdowns, and even suggesting alternative routes that may be faster. 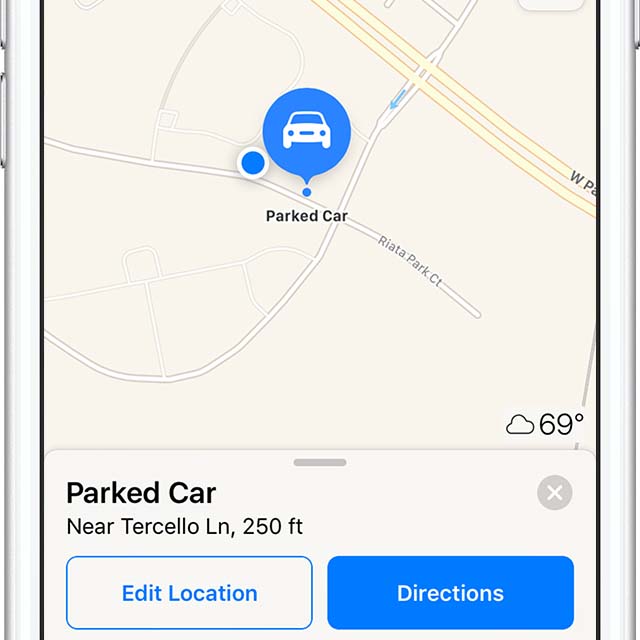 If you’re a clumsy and forgetful doofus like your writer, you’ll beam with delight the first time the Android Auto or Apple CarPlay system pops up a helpful “Parking Location” message on your phone when you leave your ride. Since Apple CarPlay and Android Auto require GPS to be active, and since both systems know when you turn your engine off, they can automatically remember, with GPS-linked precision, where you parked, even if you don’t. Just a click on your phone as you leave the mall, and it will guide you straight back to your ride in a jiff.

Your Music, Your Way 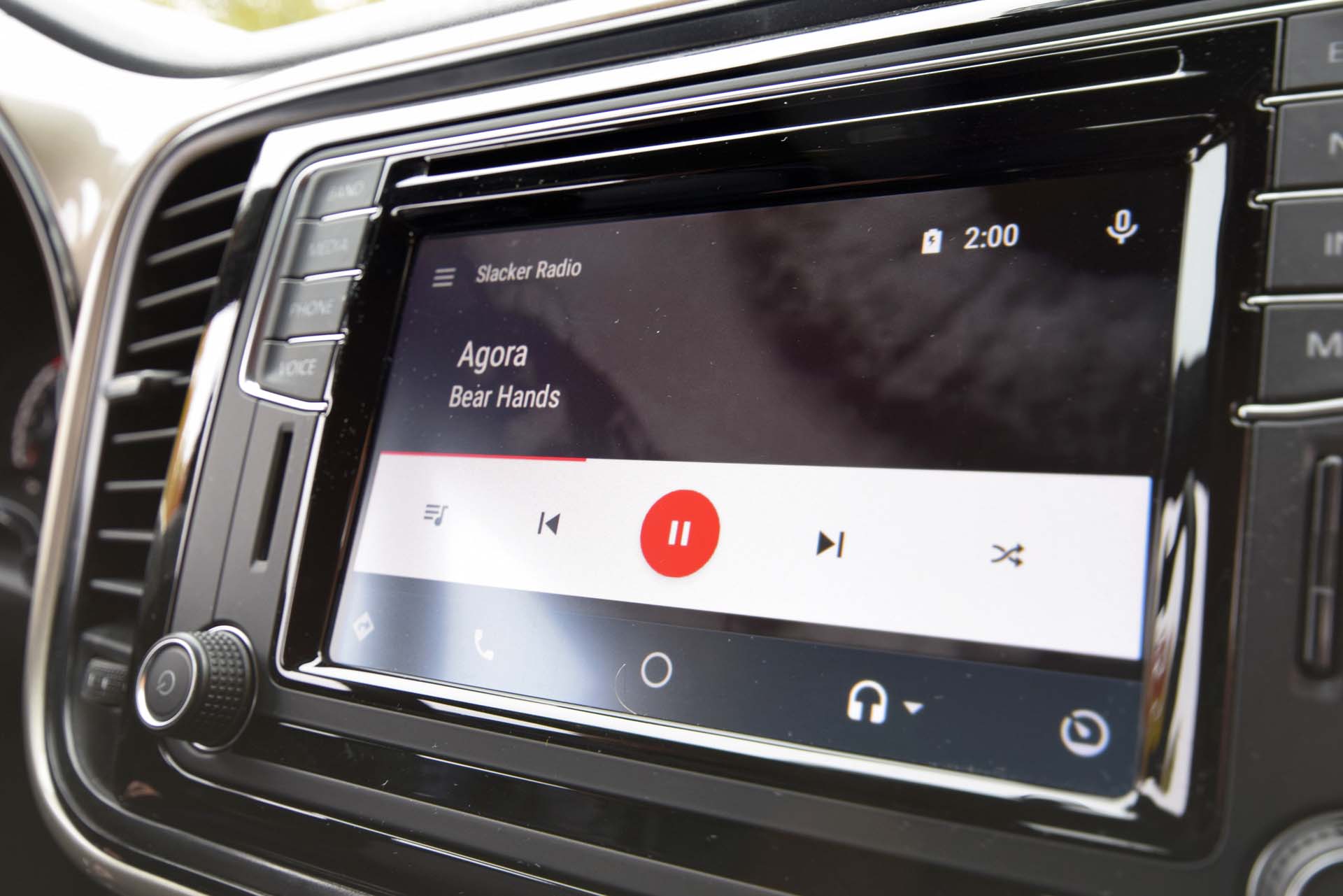 Whether you use Spotify, iTunes, or Slacker Radio, Apple CarPlay and Android Auto can upscale the playback app of your choice into the main screen automatically when you click the “Music” button. The system knows which app you use for listening – and displays that app on the car’s main screen with the same graphics, preferences, menu structures and settings that you most recently used on your phone. Pick up your listening right where you left off, with no second thought. Remember – all of the data lives on your phone, not in your dashboard. Whether it’s music, or any other available app, you’ll find it on-screen the same way you left it on your phone. 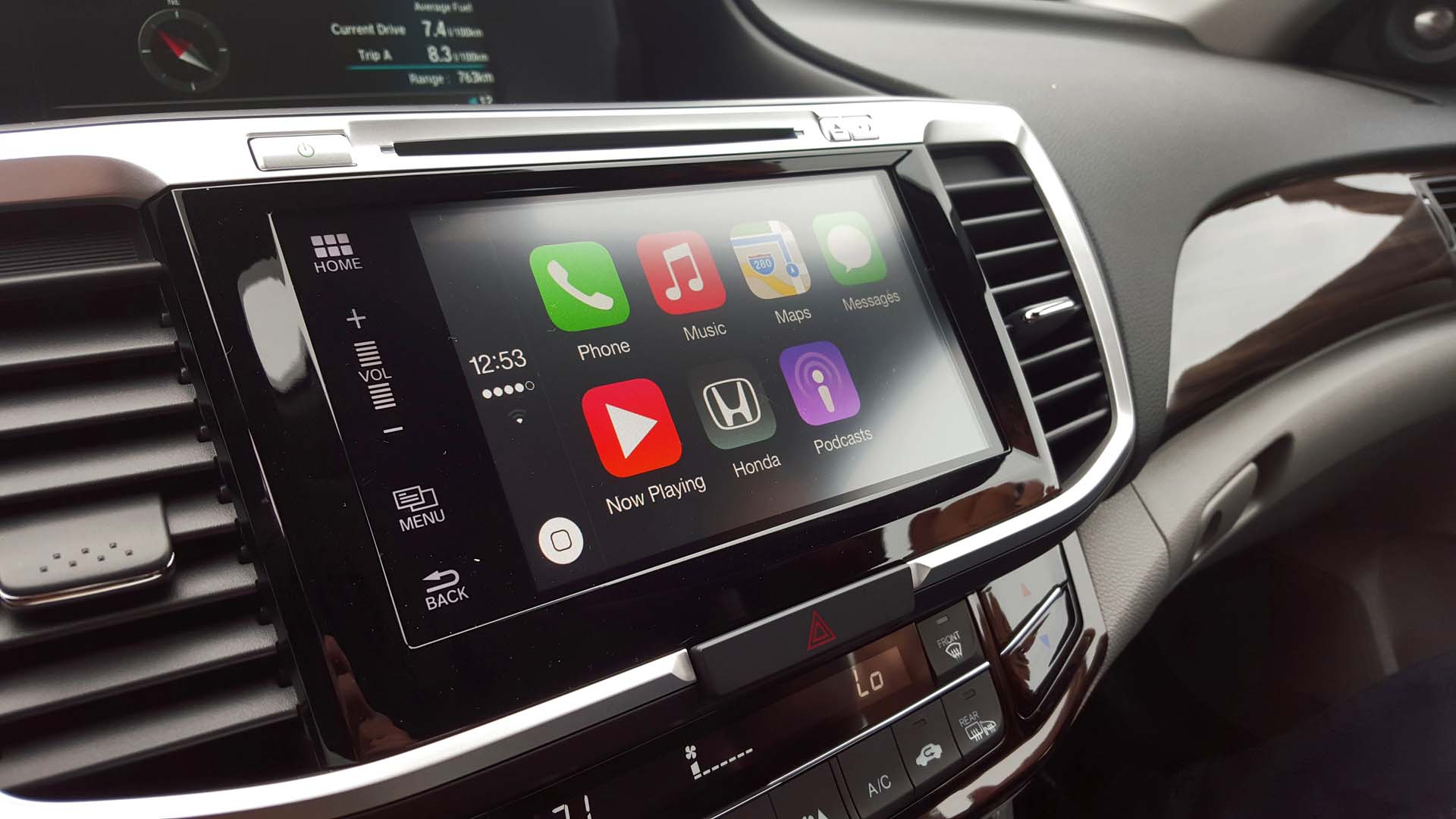 Like your phone, Apple CarPlay and Android Auto are driven by apps. Many are available – including dedicated applications that read podcasts and audio books, play audio streams from your favorite internet news or radio stations, provide quick access to sports scores, and more. Skype and WhatsApp are available now too, enhancing connectivity with voice control, and the popular traffic and navigation app Waze is en route, too.

A Note on Possible Issues 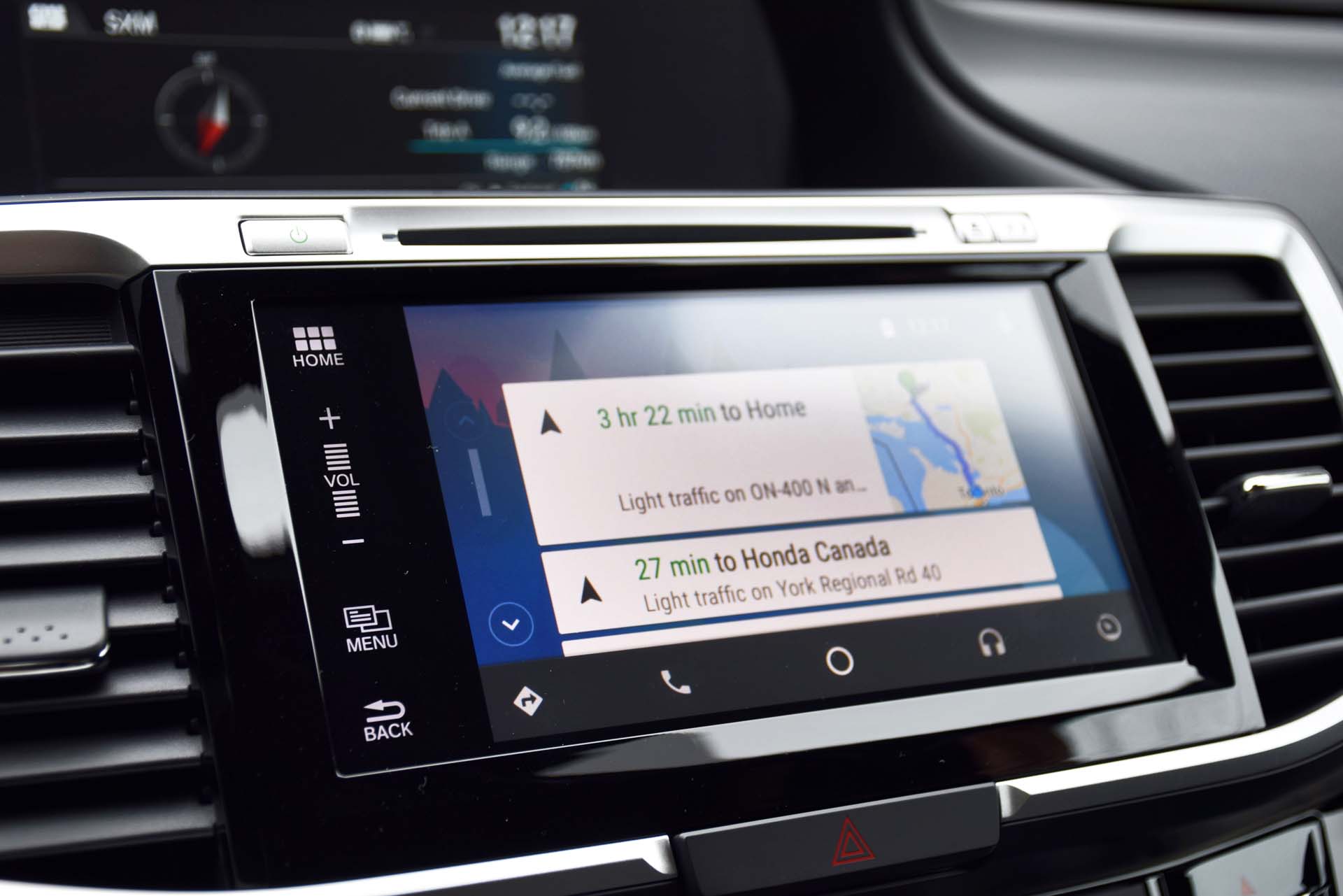 Of course, like all software systems, bugs do exist – and you might want to be aware of them, to avoid frustration.

Some Android Auto users have reported non-functionality of the entire system, or certain system components, for a variety of reasons. These range from a discrepancy between the time and date on their phone and their ride, to compatibility issues between certain versions of the program, and the operating system on the handset. In any case, ensuring that time and date settings are accurate, and that you’re running the latest software updates, can reduce the likelihood of issues.

Some Apple CarPlay users have also reported system crashes, possibly caused by having too many songs in their iPhone’s music library, which overloads the indexing service. Further, some software updates to Apple CarPlay have caused issues with music playback or system crashing.

There are many differences between phones, operating systems, pre- and post-updated software, and the vehicle systems themselves – so be patient at first. Sometimes, it can take a few attempts, and a little bit of fiddling, to make that initial setup and achieve seamless operation.

In particular, your writer experienced an issue on one Volkswagen model that didn’t like when I plugged my phone in after I started the engine, and wouldn’t let the system initialize. In this specific case, the solution was to turn the engine off, unplug and reconnect the phone, and then start the engine again.

Our editor Jacob Black also noted some problems with flaky connections in Honda vehicles, which only worked for him about half of the time. Turns out this issue, like so many with today’s electronic devices, was remedied by a software update.