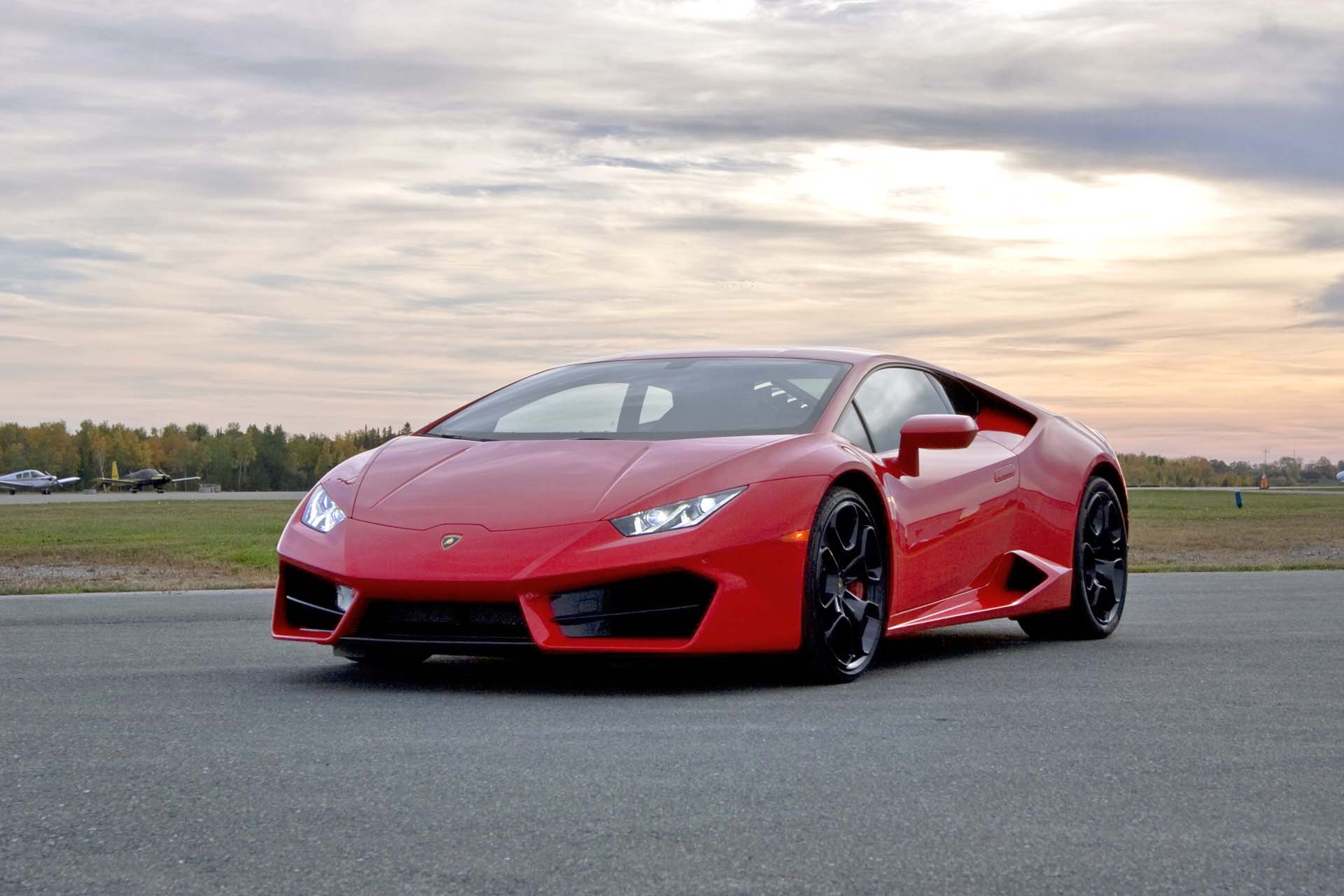 Let me state right up front, that I’m not what you’d call a “Lambo person”. Excluding of course, the glorious Miura – that exquisitely rendered, iconic piece of automotive history. I can even appreciate the over-wrought, hyper-masculine appeal of the Countach. But modern-day Lamborghinis always leave me with a feeling of distaste, as if their owners were desperately flashing the size of their wallets to compensate for other deficiencies.

So it was that the offer of a Huracán provided me with a moment’s hesitation. Do I sacrifice my ethics for a few days of guilty self-indulgence?

Well, hell yeah. Of course I did.

Aside from a few wincing moments of embarrassment at being the centre of attention in a town where the average home costs less than the car I was driving – I had an absolute blast with this car. Without the brutalist gigantism, scissor doors and garish phosphorescence of some of its Lambo siblings, the Huracán is less obnoxiously conspicuous – and its rear-wheel drive configuration and adaptive suspension gave it delightful driving character. 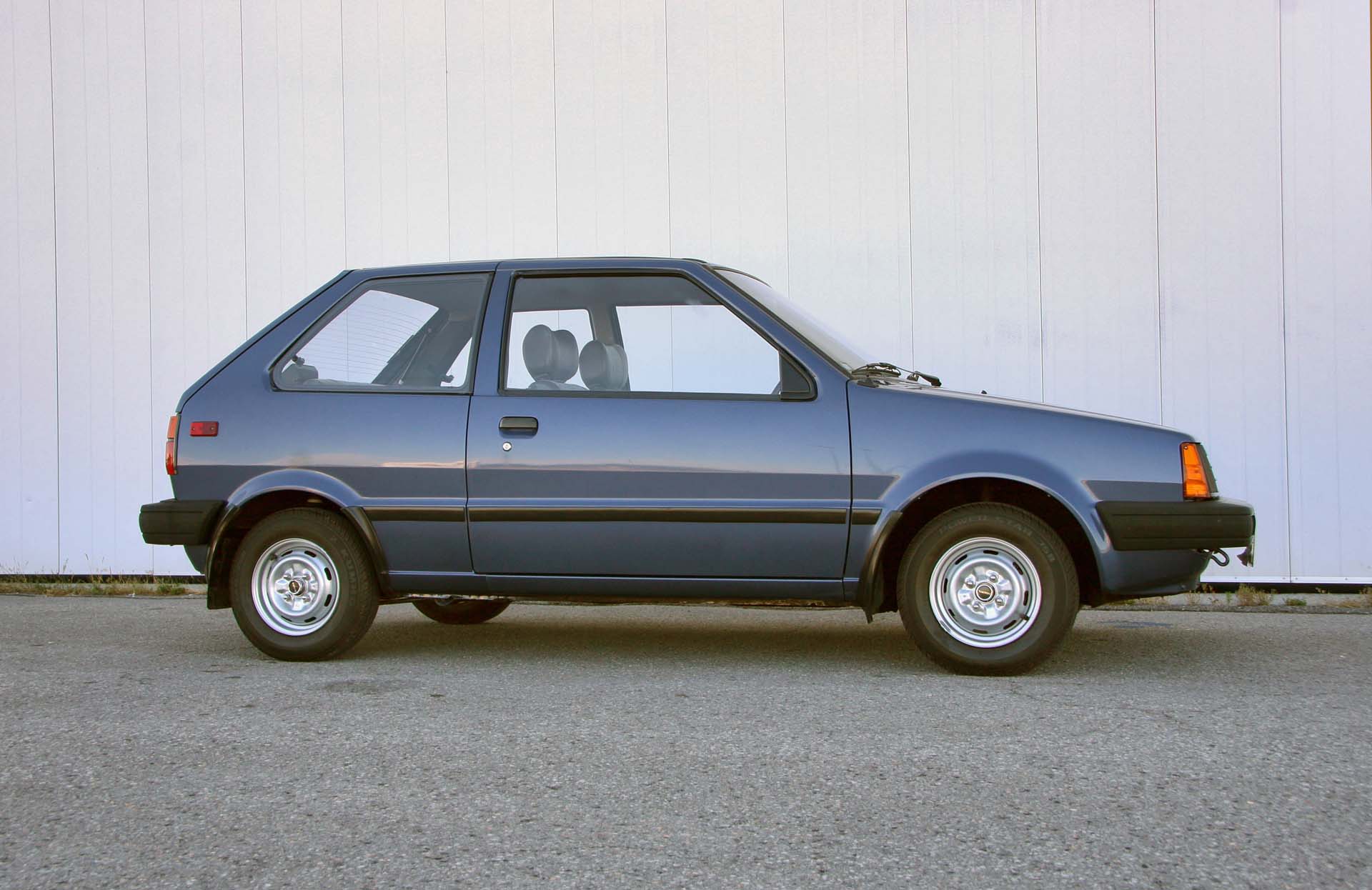 It’s impossible for me to regard the ’80s Micra without bias; after all, it was the very first set of wheels I bought on my own, and it’s inextricably entwined with my memories of those days.

When Nissan brought back the Micra in 2014, after a 22-year hiatus, a classic ’87 was on display at the new car’s introduction. To my surprise, Nissan Canada readily agreed to loan me the car.

The swell of emotion when given the keys caught me off guard. Lost in misty reverie, hand wrapped around the well-worn ball and driving the shifter home through its well-defined gates, my feet met the clutch and throttle in perfect harmony as though 20 years had never passed.

The Micra’s minuscule output of 56 hp and 69 lb-ft of torque was offset by the fact that it weighed only 710 kg. For someone who treasures the rare experience of driving a tiny, light vehicle not numbed by over-engineering, this dorky little hatchback was my own personal “way-back machine”. 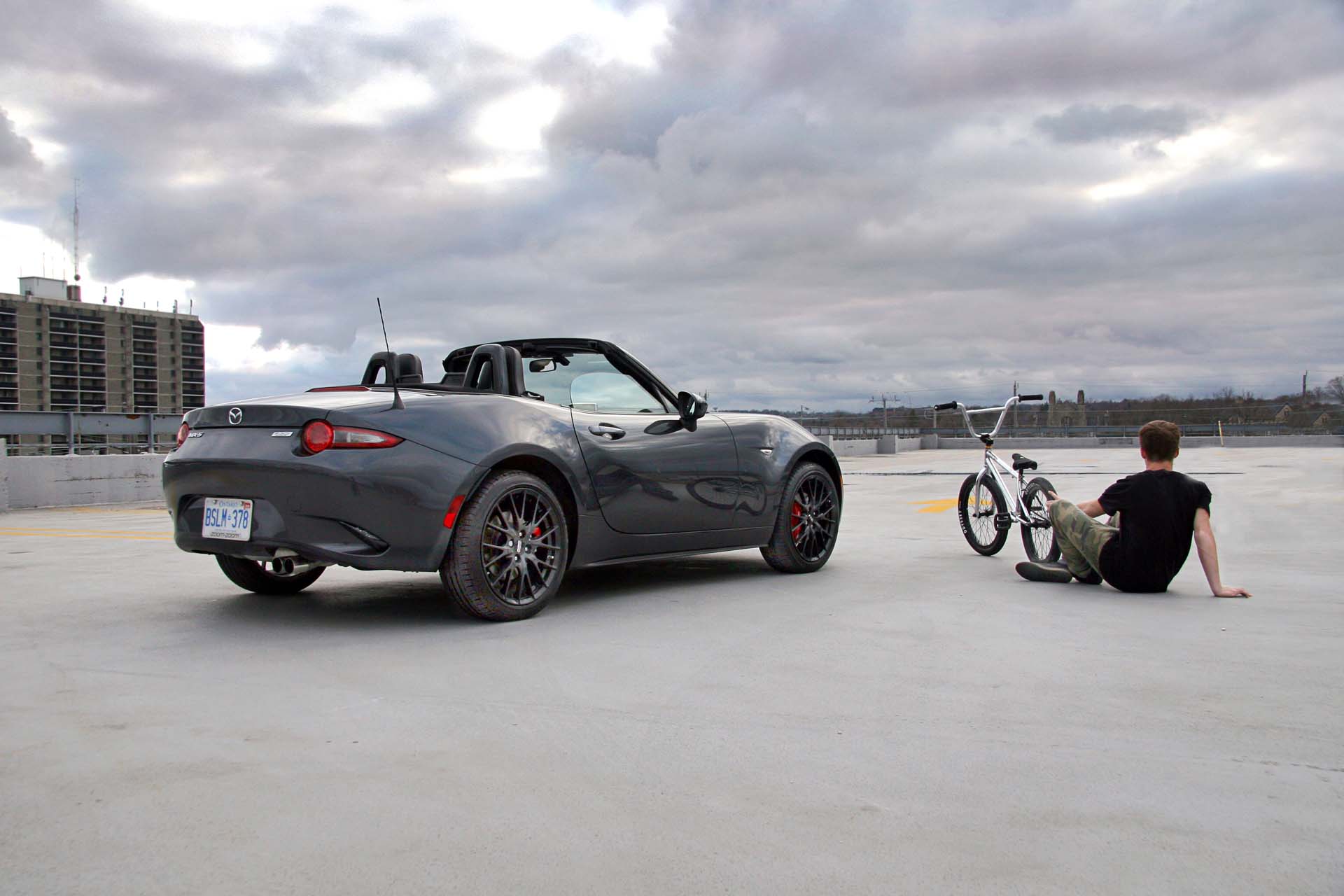 When it comes to Mazda’s iconic little two-seater, there’s no point in any pretence of objectivity. I drank the Kool-Aid long ago, and found it delicious, thank you very much.

When viewed through the windshield of an MX-5, my world couldn’t be brighter. If I had a vision of automotive utopia, it would look very much like this. Adding the sports package is like using the “clarity” filter to tweak that image – removing the soft spots for laser-sharp definition.

The lines of communication are wide open: grip and road feel are transmitted with crystal-clear feedback. The MX-5 is an eager, frolicking terrier, light-hearted and playful yet dazzling in its athletic ability. Van Halen blasting from the Bose speakers, I’ve got endorphins coursing through my veins and, I strongly suspect, a sappy grin pasted on my face. 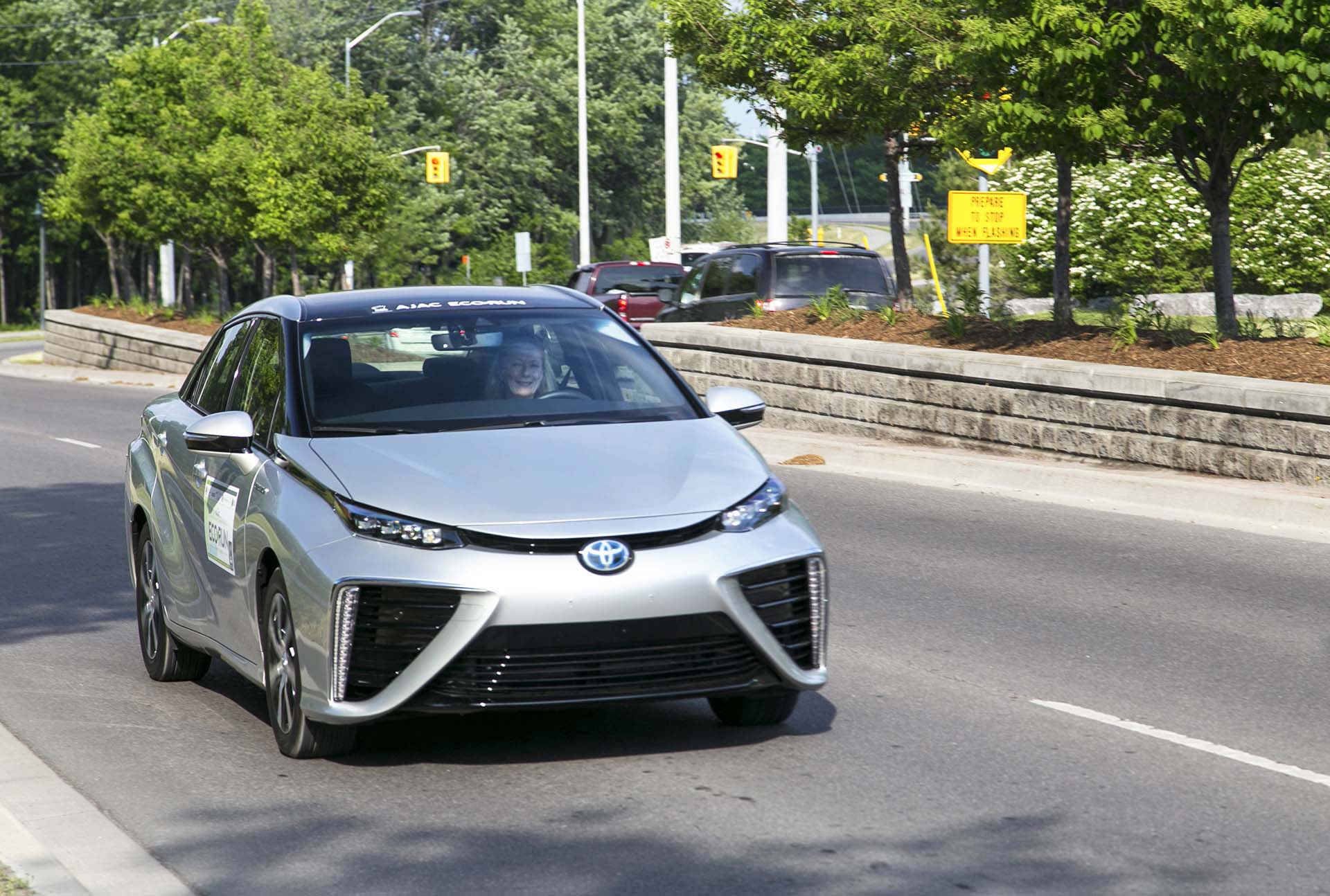 Trapped behind a flatbed in near-stationary grid-lock, I failed to recognize that my lane was abruptly ending in a construction zone. Signalling to move over, I found my way repeatedly blocked by a semi, who stubbornly inched forward just enough to make escape impossible. When the flatbed lurched ahead, I shot through the opening, scant inches to spare – the semi blasting its displeasure with great air-horn blatts.

“Ahhh, my friend,” I thought to myself, “this is one battle where the bully’s size means squat.”

Given the public’s perception of hydrogen power, it’s highly unlikely that the transport would have risked tailgating the Toyota Mirai I was driving if he’d recognized its badging, and thought he might rear-end a bomb. With great pleasure, I pressed the “H20 purge” button, chuckling like Beavis and Butthead as the stream of water exited the tailpipe to spatter the semi’s front grille.

Gaspésie in a BMW 4 Series 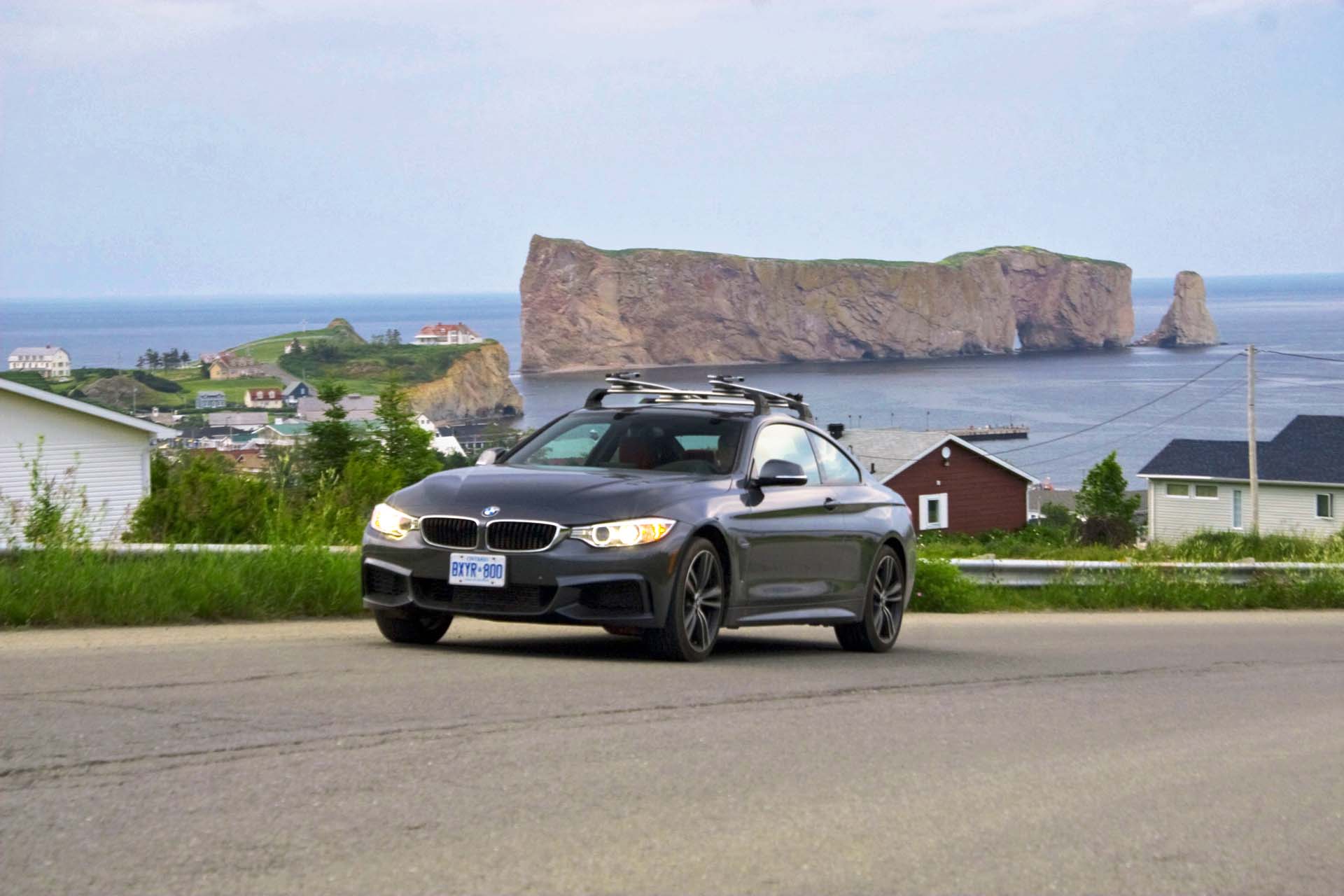 After nearly a week spent gorging ourselves on fresh lobster, watching the tide roll in, and then back out over the endless red sands, we were sliding into near-catatonic levels of lazy satisfaction.

An oasis of tranquility, particularly if you stick to the rural coastline and avoid anything remotely associated with Green Gables, Prince Edward Island is the ideal escape from the daily grind. There’s something about the lush, rolling meadows, the tang of salty air and sand dunes laced with sea grass under your bare feet that coaxes out the knots of tension and leaves behind a peaceful sense of well-being.

But for us, the joy lies in the journey, not the destination. Itchy to get back on the road, we packed our gear into the BMW 435i xDrive coupe and hit the blacktop.

I’ve seen some spectacular scenery over the course of sixteen years of driving the globe – but there’s something about the haunting ruggedness of the Gaspé coastline that makes an indelible impression upon the soul. Route #132, 1,600 meandering kilometres of pavement circumnavigating the enormous peninsula is an absolute must for any driving enthusiast’s bucket list.