Rosie MacLennan is Canada’s golden girl. The gymnast stole Canadian hearts after winning a Gold medal in trampoline at the 2016 Summer Olympic Games in Rio. And it’s not her first Gold. MacLennan made history four years ago, winning Canada’s only Gold medal and the first-ever in trampoline at the 2012 London Summer Olympics. Despite suffering a concussion during training last year, the international superstar bounced back, defending her Olympic title and becoming Canada’s first summer athlete to win back-to-back individual Gold medals. Despite her success, the world and Olympic champion is still as grounded as ever. She drives a 2015 Ford Focus hatchback.

RM: “I have a partnership with a dealership. About a week before [the Summer Olympics in] London I was driving my grandfather’s old car. It was a ’98 Ford Escort and it died. The mechanic in my home town said, ‘I can fix it for you, but it’s not worth it anymore. You’re better off to scrap it.’ A week before London I had no car and when I won [Gold] I got asked what was I going to do with my prize money? I said, ‘I have to replace my car.’ A car dealership in Bolton, Fines Ford, his wife heard the interview and said, ‘We need to do something for this girl.’ They support professional athletes and they’ve worked with basketball players, the Raptors, the Leafs and he’s like, ‘Why are we supporting professional athletes and not amateur athletes? We should do something for her, especially since she grew up in a town nearby.’ They’ve been providing me the use of a car for the past four years.”

RM: “Yes. I always drive the same model. Right now I’m driving a 2015 model. It’s a small hatchback. It’s white. It has good trunk space. It’s perfect for driving around the city. It’s great on gas and it has good technology in it, too. It’s awesome. I really enjoy driving it.”

RM: “Automatic. I have driven stick in the past; it was a little stressful.” 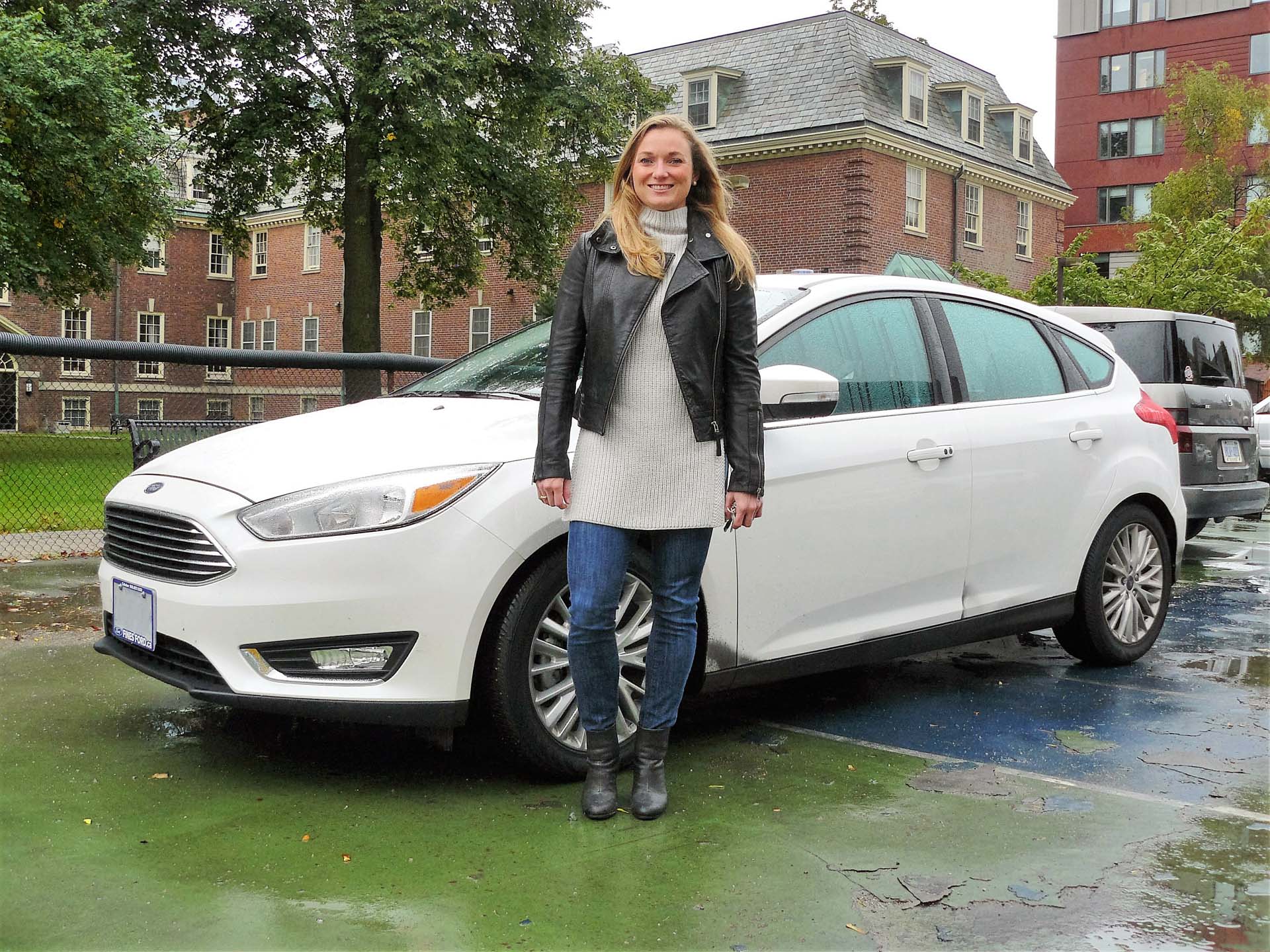 PG: “What does a Focus say about you?”

RM: “It’s a little sporty, but not overly. It’s not flashy. I’m not a flashy type of person. I think it’s a fairly practical car. It’s a really comfortable car. I have a bike rack on the back so we put our bikes on it and go up north and ride. It’s really good on gas so its cost-efficient, too.”

RM: “My grandfather’s car. It was a blue Ford Escort and that was the first car that was mine. I started driving it in 2009. My grandfather kept it in really, really good condition. Over the next few years, it started to break down. It left me stranded a few times. It broke down when I was driving to training a couple of times. It broke down on the 401 once. That was a little scary.”

PG: “Are you a car girl – do you like cars and driving?

RM: “I do. I’m not a huge car fanatic. But I really do enjoy driving. For me, it’s a time I can put on music, a podcast, or just think and have time to myself. You can’t check your emails so it’s a nice time to just chill.”

PG: “What do you listen to when driving?”

RM: “In Canada, Peninsula Road, up in Muskoka. My parents used to have a cottage there. My aunt’s cottage is down the road from there, too. I really enjoy driving up north because it’s a beautiful drive. It’s a nice road with lots of trees, windy, hilly and fun to drive. I’ve been really lucky – we’ve driven between training camps and competitions in Europe. We’ve driven up mountains in Switzerland and along the ocean in Brazil. I really love roads with a lot of scenery. I don’t particularly like city traffic.” 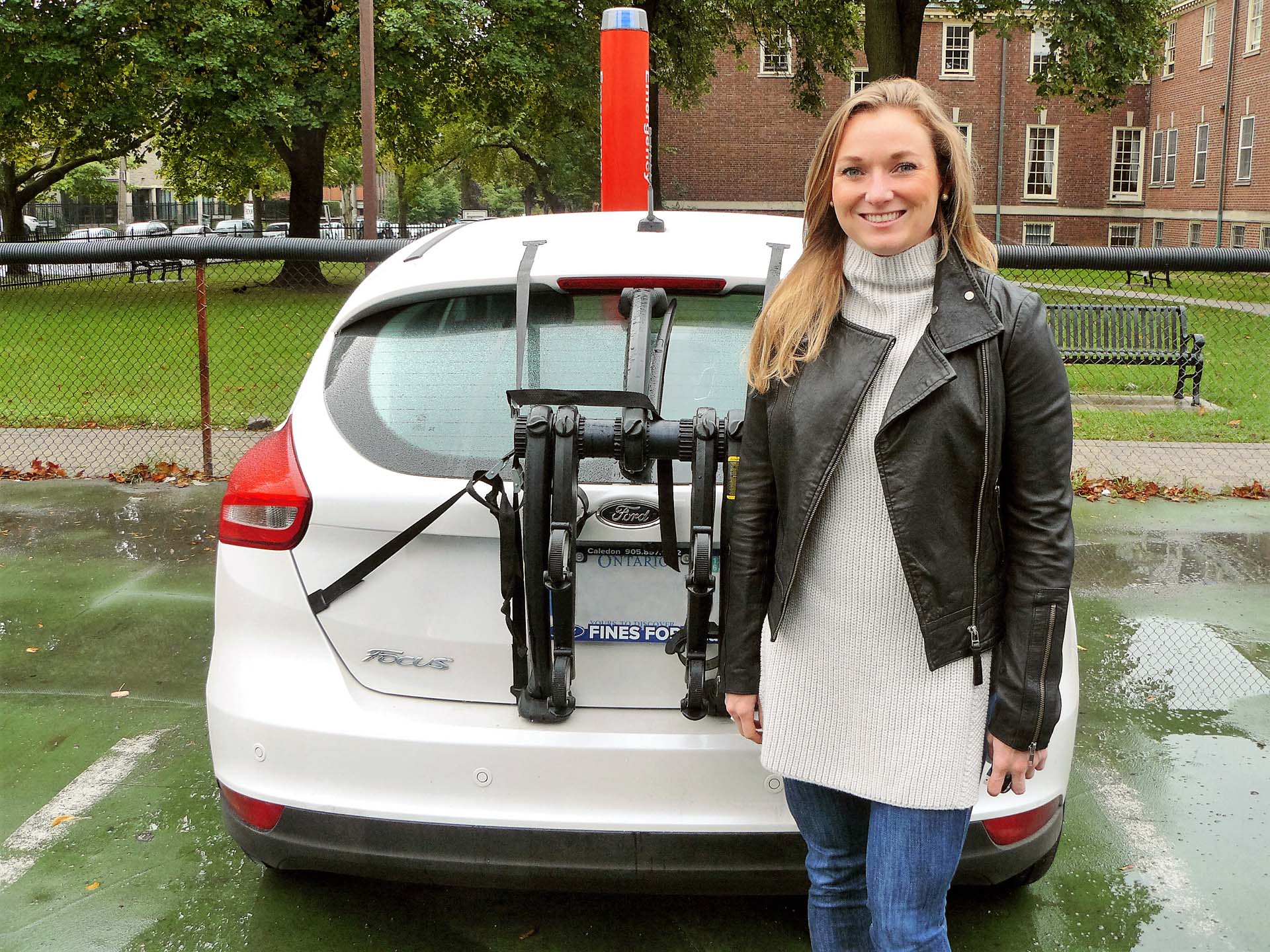 PG: “What is your best and worst driving story ever?”

RM: “My best is when I came back from London I was driving home with a friend from an event at the zoo and all of a sudden a car was honking at me. I look over and they’re like, ‘Roll down your window!’ So I roll down my window and they ask, ‘Are you the gold medalist?’ I said, ‘Yeah.’ They started screaming, ‘YEAH!’ That was funny. Worst driving story – when I was in university I was driving downtown for an exam from my parent’s place and I got rear-ended by a taxi. It was a small dent, but it was a little stressful.”

RM: “If I were to buy one I’d probably look at the Ford Escape. I don’t want to spend a lot of money on a car, but I’d look at that because it’s a bit bigger, especially because my boyfriend is 6'8".

RM: “No. He’s not. He said it’s one of the few cars that he fits really well in because the seat goes so far back and down. The person behind him might not have much room, but it’s perfect for him.”

PG: “What will you spend your prize money on – the Escape or something else?

RM: “Because I didn’t have to buy a car after London I still have money put aside in savings. Last year, when I had my concussion, I made a promise to myself that if I did make it to the Olympics I wanted to do something in the spirit of the Olympics. I’m donating my 2012 winnings to [Canadian Tire] Jumpstart and Right To Play. I’d like to do something similar again – donate some of it to Right to Play, Jumpstart, and maybe the Women’s Brain Health Initiative because of more recent issues with my health.”

Notable achievements:
• started trampoline at 7 and began competing internationally at 11
• 2016, 2011, 2009, and 2005 Canadian National Women’s Champion
• 2016 – Canada's flagbearer in the opening ceremony at the Summer Olympics in Rio
• 2015 – defended gold medal at Toronto 2015 Pan Am Games, sharing the podium with teammate Karen Cockburn
• 2013 – won her first gold medal at the FIG World Championships in Bulgaria
• 2011 – graduated from the University of Toronto with a Bachelor of Physical Education and Health
• 2011 – won gold at Pan Am Games
• 2014 and 2011 – won silver at the World Championships
• 2007 – won silver at Pan Am Games
• 2007 – World Champion in synchronized trampoline with Karen Cockburn
• her grandfather Lorne Patterson was supposed to compete in gymnastics at the 1940 Olympics, but the games were cancelled because of WWII