Do you know what’s good about tiny motorbikes?

It’s true. If you are in the market for a Kawasaki Z125 and have come to this page looking for validation, strap in for a heck of a lot of it. 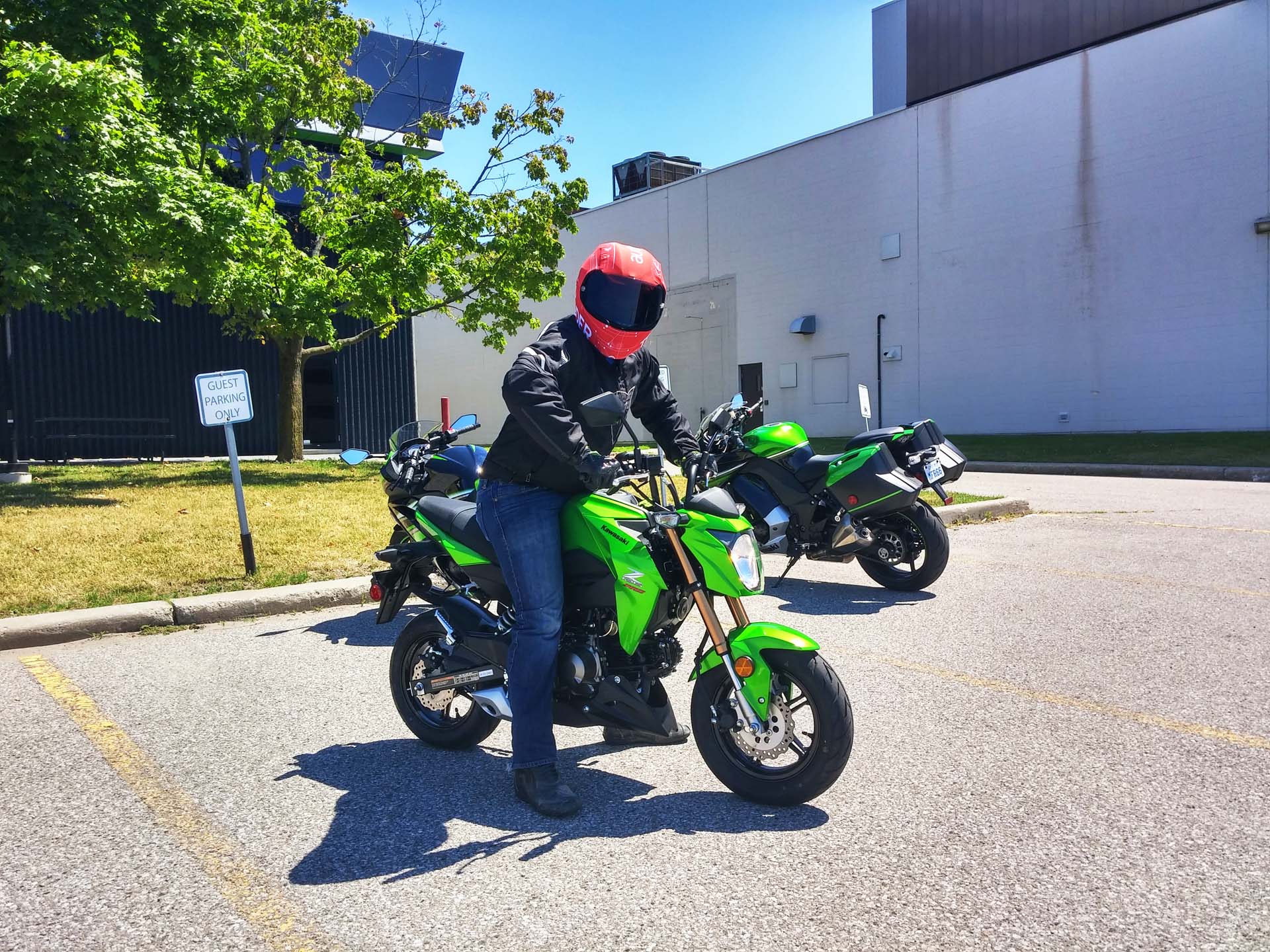 Kawasaki were not the first to jump onto this idea. In fact, they’ve come to market a fair bit later than the ground-breaking Honda Grom. This bike is so similar in ideology, stature and specification to that surprisingly successful little bike that you cannot possibly speak of the Z125 without mention of the other. And why wouldn’t Kawasaki jump into the rich, chocolate river of sales success and goodwill Honda has generated? The team in green has unabashedly copied the Grom. The Z125 is a direct replica.

But it is also better. Well, mostly.

Both have a 125 cc single mated to a four-speed transmission putting out about 8.5 hp and about 7 lb-ft of torque. Those numbers aren’t impressive, but mated to this tiny, low-down bike with its itty-bitty 12-inch wheels the performance is more than pleasing. These bikes are both such a blast to ride. 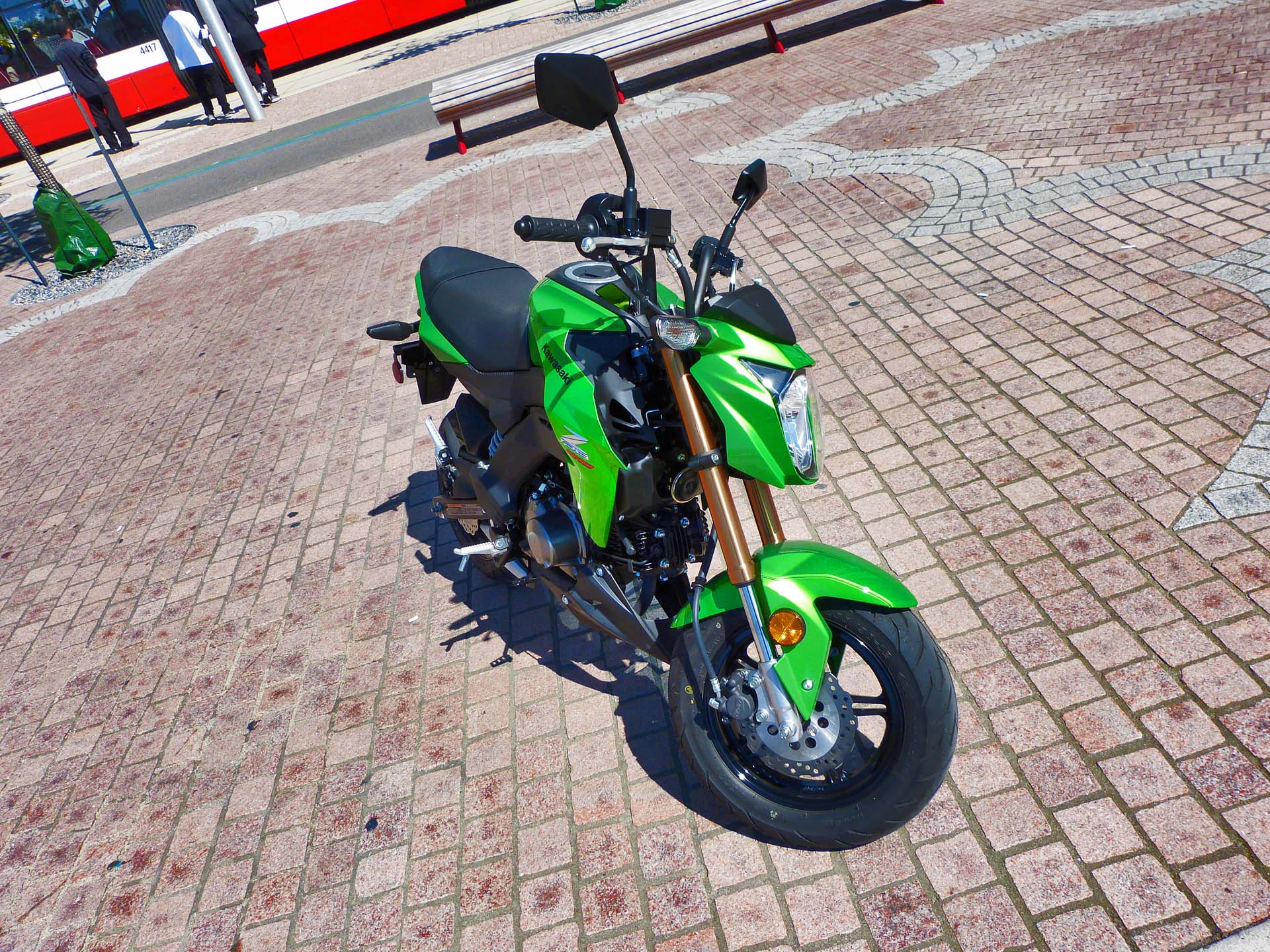 Down the highway, I could only eke out a max of 102 km/h on the Z125, compared to the 112 km/h I got from the Grom. That discrepancy warranted exploration and it turns out shorter gearing is the culprit here. The Z125 feels zippier because of that short gearing, where the Grom has been geared to make sure it will do highway speeds.

So why is the Z125 better? Well, in part it's because of the zippier performance at city speeds, but it’s also a more substantial-feeling bike. Where the Grom is a blast to brutalize, jumping it off curbs and throwing it around, there’s always a sense of smallness. The Z125 feels stronger, better put together. It’s a little less rickety-feeling, which is important if you like to do stoppies. Which I don’t. Of course. Because illegal.

You also don’t feel like you’re perched precariously over the front wheel on the Z125 either, rather the riding position is comfortable and confidence-inspiring. The wheels soak up the bumps shockingly well, and the handling is agile, lithe and grin-inducing. I only wish I’d put my full leathers on and gone out on a go-kart track or mini-bike circuit – something many are already doing in organized and not-so-organized races popping up all over North America. There is a blossoming after-market cottage industry too, with everything from sexy-sounding exhausts to blingy levers and accessories.

Where Honda has outshone Kawasaki is in two areas: One, the instrument cluster. The one on the Grom is ripped from the CBR500 group. It’s a slick, well-integrated unit with tonnes of information and a sexy little screen. The Z125 unit is a bit old school, a little dated and a little too big for the bike. It’s the only styling miscue on the otherwise ultra-spunky rig. 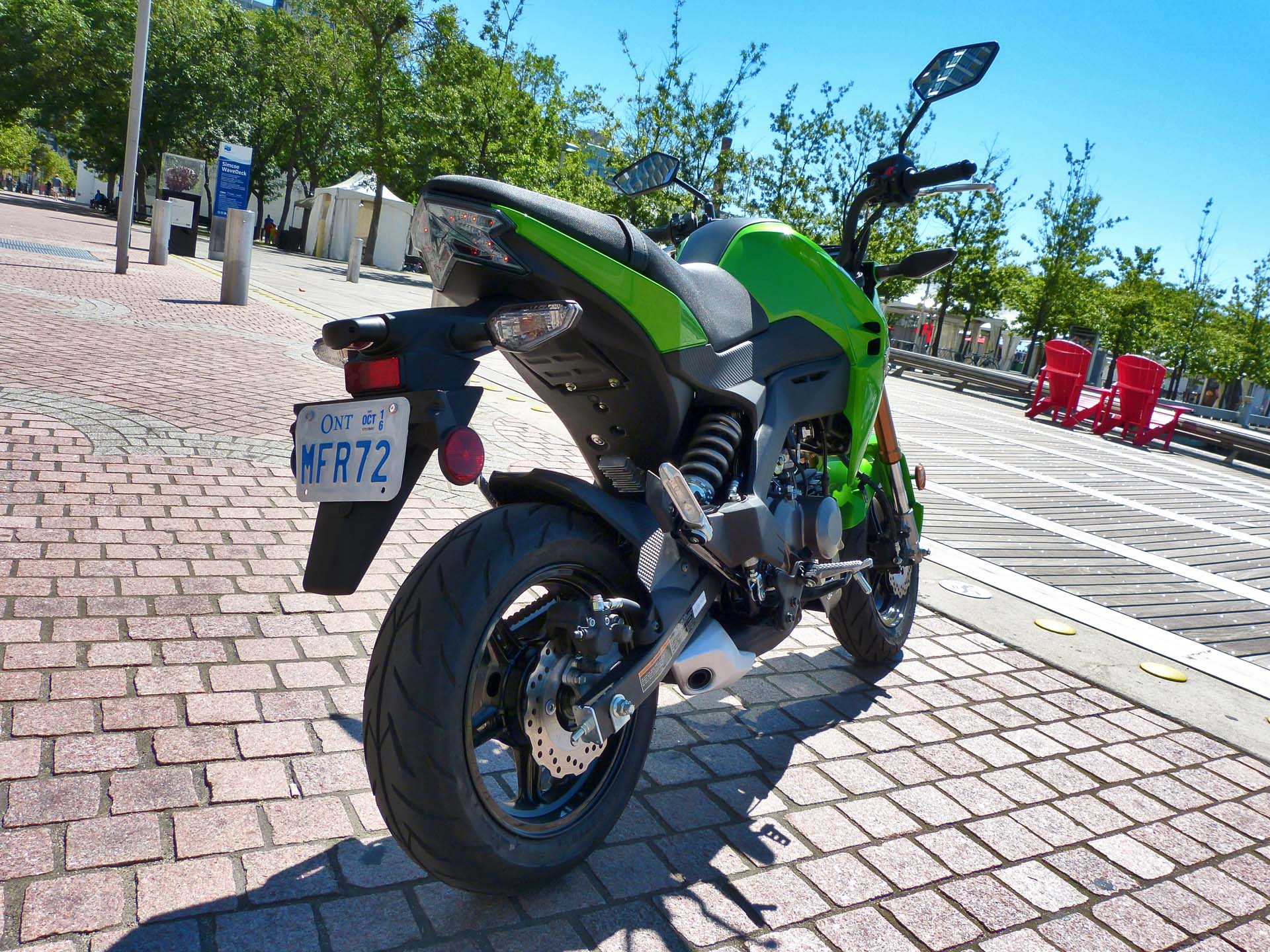 The other place Honda has outclassed Kawasaki is the name. Z125 is four syllables (if you pronounce it Z-1-2-5). Grom is one syllable. If you spelled the latter in letters big enough for my Nan to read it would be as wide as one of its tiny wheels. It takes longer to SAY “Z125” then it does to walk around it. This is significant. See, marketing is hard. Marketing a small bike to new riders is hard enough, and established ones even harder. You need something catchy, something attention grabbing, and something sticky. Z125 is a lame name for this bike.

Trouble is, what else could they call it? One of my friends suggested “Duck” (as in Kwakka – get it?) and another suggested Zippy – but that sounds like a lighter, and also sounds a bit limp, something this bike isn’t. Baby Z would be cool, or Ninjita.

Maybe Kawasaki could borrow from pop culture, “get with the kids” and also let a common reaction to the Z125 inspire its name.