We’re riding in a tour bus about 300 km north of the Arctic Circle, and if we were to match up Ivalo’s latitude (68.65 degrees N) with a location in Canada, it would be somewhere near Gjoa Haven, Nunavut. I’ve only been further north once in my life, and when I think of such remote locations in Canada, images of a desolate moonscape far north of the tree line come to mind.

I was prepared for the worst; March in northern Manitoba – heck, even southern Manitoba – can see air temperatures in the minus-30s. But, as is the case in most of the Northern hemisphere this year, El Niño has made it a mild one in Ivalo. There’s plenty of fresh powder on the ground, no wind to speak of, and late-season snow accumulations that exert considerable weight on the wood-framed chalets that dot the landscape in the nearby ski village of Saariselka.

Needless to say, this is not what I was expecting. I’m struck by the number and height of the trees here; I was fully expecting moss, shrubs, and snow. And in this surprisingly populated and civilized patch of far north, Finland’s Lapland region is host to a remote test facility for one of the world’s foremost winter tire producers: Nokian Tyres’ Ivalo test centre.

As we enter the facility, we’re greeted by a fleet of snow clearing and grooming equipment, all proudly bearing Nokian graphics. As the big bus – also decked out in Nokian’s “Northproof” brand graphics – parks and we start to disembark, we hear a rumbling from down the road. A fleet of four Audi RS4s pulls up and Nokian drivers step out. These are high-mileage cars that are nearly ten years old but they are maintained in top condition right here on site.

As we’re barely containing our excitement at the prospect of flinging these manual gearbox, all-wheel-drive sports sedans around in the snow, we realize that this was just the appetizer. A group of new Audi Q5 Hybrid crossovers – led by a hotrod SQ5 – also pulls up to participate in the day’s activities. As if this weren’t enough to process already, another convoy of fine machinery pulls in. RS5 coupes, these ones, and they’re nearly new as well. Unlike the older V8-powered RS4s, each of these has a blown V6 that is capable of sounding nearly as mean and providing even more thrust.

As droolisicles start to form on our chins while we gush about the machinery before us, the group suddenly fell silent and parted as a Nokian-owned Mercedes-AMG GT-S ambled slowly through the crowd, its studded Nokians confidently and quietly tracking through the packed snow.

White Hell? I don’t think so. Somewhere along the way we must have done a 180. 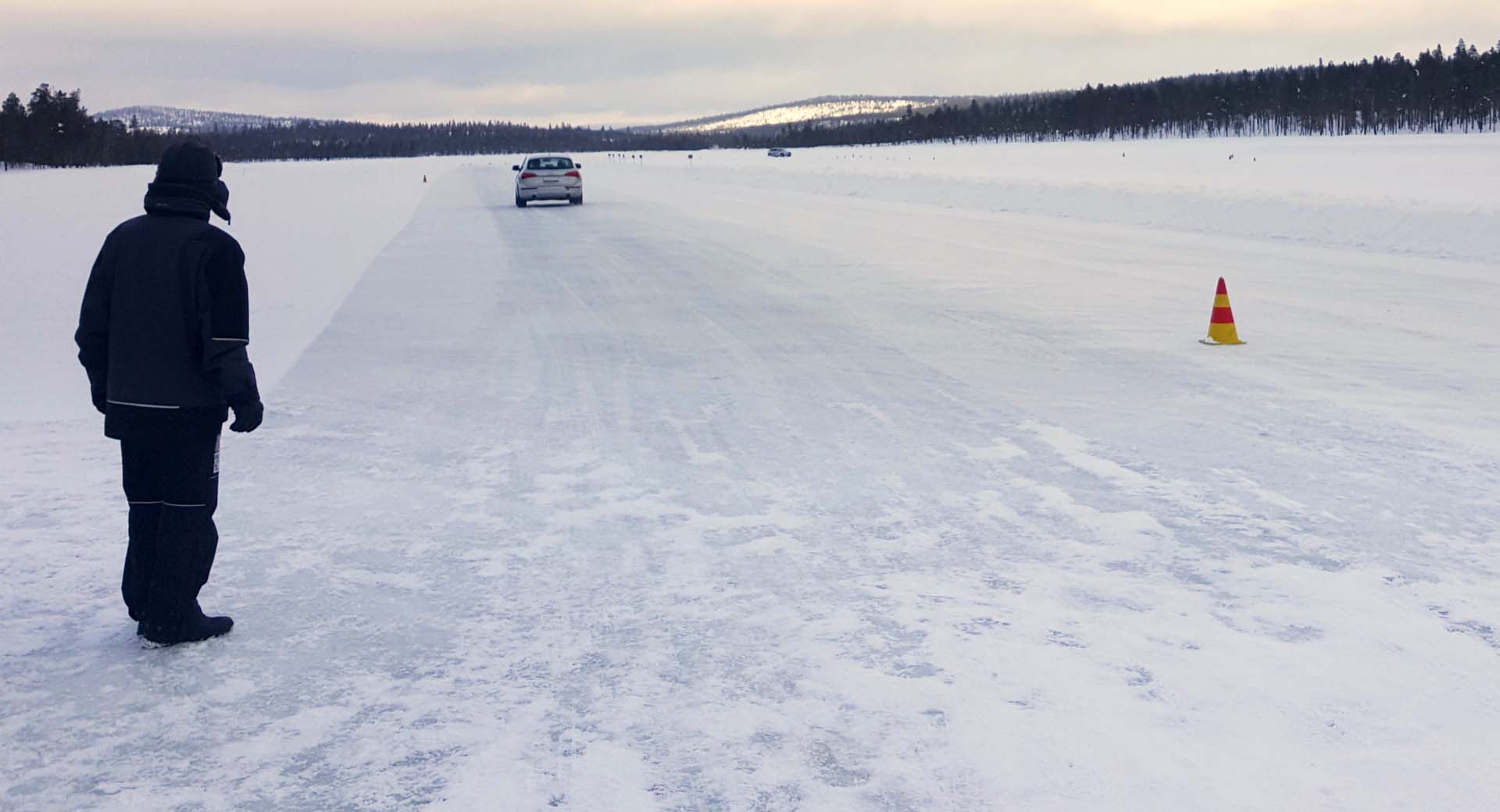 It’s hard to believe that the temperature can swing 50 degrees Celsius in a single day here, and that we’re so far north that the sun only peaks above the horizon for about four hours a day in late December. But it’s nearly the vernal equinox now, so daylight hours don’t differ much from what we are accustomed to back home.

The Ivalo test facility has many components, with 20 different tracks covering more than 100 km. Land and frozen lakes provide the driving surfaces with ever-changing conditions in which to evaluate the 20,000 tires that go through here each year.

When a bit more of a controlled environment is called for, the facility’s 700-metre “ice hall” can be used to limit the variables inherent in outdoor environments. Think of it as an above-ground tunnel that protects the surface from wind and precipitation, but make no mistake: it’s still cold in there. This is an area of the facility that allows more accurate comparisons during testing, but objective laboratory results are not the focus of White Hell.

We had an opportunity to discuss the facility and its operations with Matti Morri, manager of technical customer service for Nokian. A very personable guy with a technical engineering background, Matti gave us some insight into what the Ivalo Testing Centre is all about.

Laboratory testing only goes so far, he explained. “The handling characteristics of a tire cannot be measured with a gauge. For this, we rely on our experienced test drivers, who develop a feel for the tire and make proposals to product developers.” That’s not to say one type of testing is better than the other, of course. But all data, objective numbers and subjective input alike, are essential to successful tire development.

Each of the company’s five handling drivers have gone through a two-year internal training program and are taught to analyze everything to do with the tires and their behaviour. These aren’t race drivers, but they do drive the cars at high speeds around a  9km road course to talk about feel, skid recovery, and lateral stability that only this type of facility can offer. 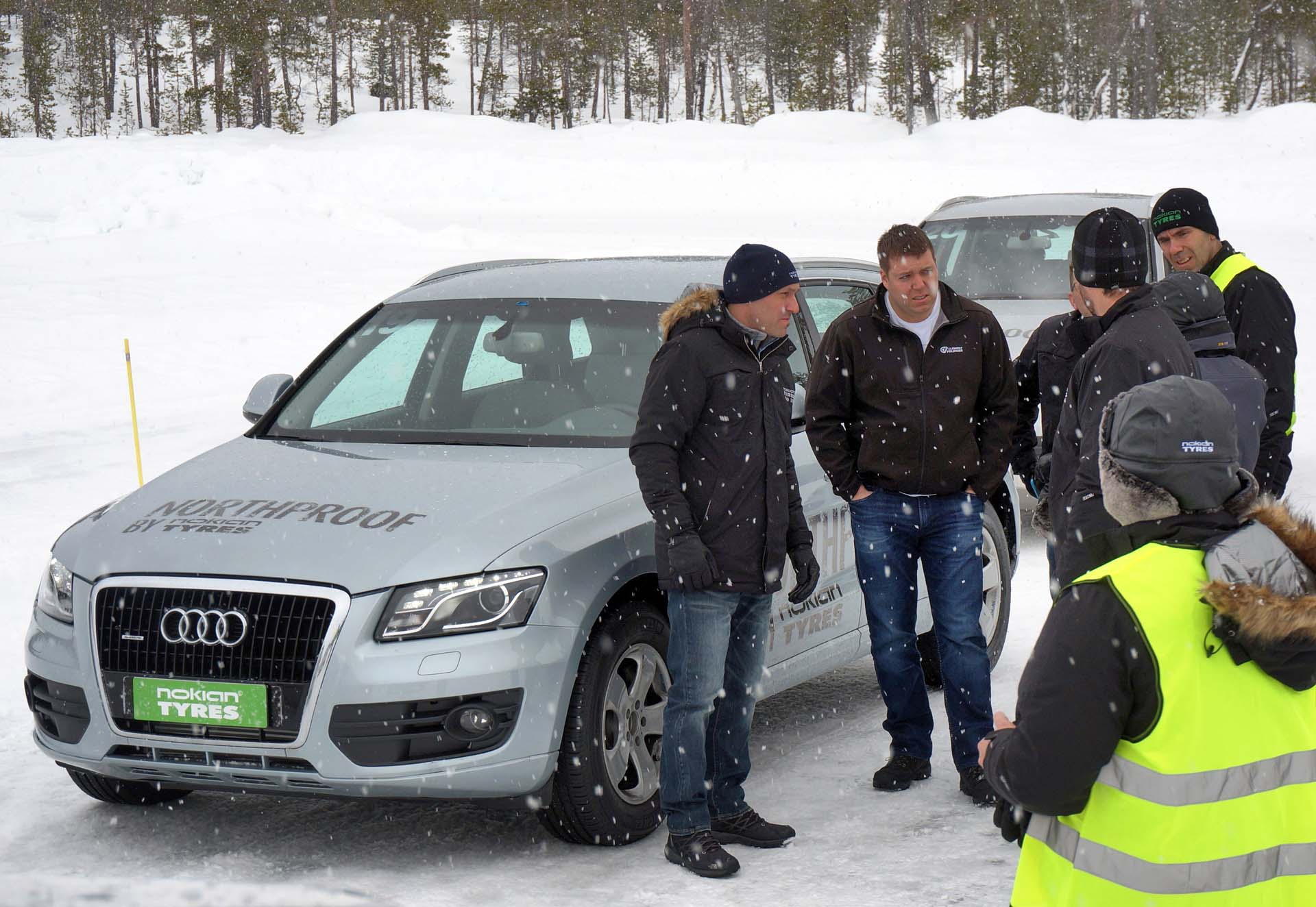 Turns out there are some similarities with the auto industry when it comes to product development cycles. “It takes about four years to develop a new tire line. When a new tire is introduced in the marketplace we are already working on the next generation.” It’s no surprise that basic tire construction hasn’t changed for the past 25 years. “The difference,” says Matti, “is in the rubber compounds.” That, and the finer details of the tread design and its ability to deal with the thin film of water that forms between the rubber and the ice.

The term I kept hearing throughout the day was “lateral creep”: that refers to the tendency of a tire to stray from its intended path around a curve. Longitudinal creep – loss of traction under acceleration and deceleration in a straight line – also came up, but for the most part tire companies have that part figured out. It’s in the corners that industry leaders are made.

We got to spend a day doing some exercises designed to give just a taste of what goes on here six days a week, from November to May each year.

First we strapped ourselves into the Audi RS4s to drive them around a short road course. It was all white on white with no visual clues to the constantly changing traction levels underfoot. This exercise was designed for pure fun – the protruding studs on these special ice tires would never be allowed on public roads. We were instructed to leave the stability control switched on for the duration, which was just fine by me. This was a tight course that didn’t require anywhere near the power levels offered by these super sedans.

That point was proven when I finished a few laps in the RS4. One of the drivers motioned over to a fairly innocent looking VW Golf circa 2002. “That’s the fastest car around this track,” he said. Challenge accepted!

Turns out this Golf wasn’t innocent at all. With the same wild studded tires and a roll cage, it was prepped for serious hot laps. Turns out it was a diesel, too, giving it great low-end torque essential for getting around this tight course quickly. 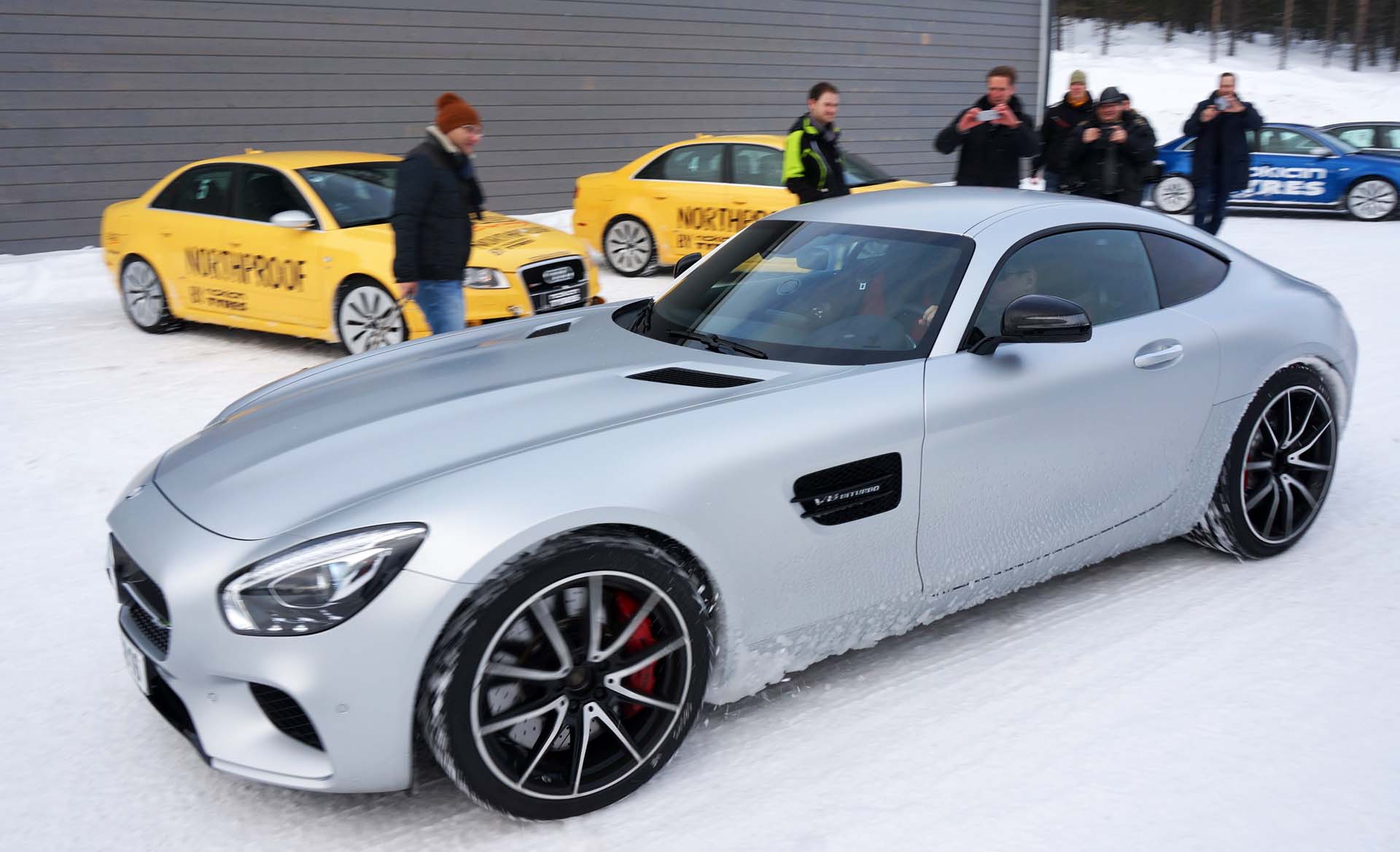 It took a few corners to become accustomed to the Golf’s front-drive dynamics after being in the RS4s, but after not too much time I was flinging the car around the track (no stability nannies in this one) and deriving great joy from steering with the throttle – yes, it can be done with a well-balanced front-driver. On this packed snow and ice, the grip of these studded tires was such that I don’t think I really had a clue how slick the surface actually was. No matter: I think the grin lasted about two hours after those laps.

The second exercise was a bit more informative, but also emphasized the importance of doing proper comparisons, even out here where variables cannot be controlled. We loaded up into the fleet of Audi Q5s, each equipped with a different set of tires, and headed to the outdoor ice track. Built on a frozen lake, the purpose of this area was to assess the acceleration and deceleration characteristics of the tires, followed by a slalom to help assess the ever-important lateral creep characteristics.

The tire selection included the usual suspects from Nokian – Hakkapeliitta 8 SUV, Hakkapeliitta R2, and WR G3 SUV, the company’s all-weather tire – as well as all-season tires from other major tire brands. The exercise involved accelerating to 45 km/h and hitting full brakes at a set of cones, and measuring the distance using markers on the course. As expected, the studded Hakka 8s outperformed all of the other tires by a wide margin. But here is where the importance of proper comparisons comes into play. A couple of the results didn’t jive with my expectations, namely that the all-season tires seemed to stop me as well as the Hakka R2s and better than the WR G3s.

I’m quite confident that if I were controlling the variables better this wouldn’t be the case. It’s pretty easy to list the things that would throw off the test results: was I doing 45 km/h or 43? Or 47? Did I hit the brakes exactly at the cones? Did I use the same force each time? What about my alignment? If I move even one foot over between runs then I’m driving on different surfaces.

So while the exercise didn’t show me how Nokians stack up against their competitors, it gave me a new appreciation for what goes into proper testing.

The final treat of the day was a drive on public roads followed by a handling course in an Audi RS5 shod with Hakka R2 studless tires. Even though studded tires are permitted in Manitoba, they are forbidden fruit in southern Ontario. To me, though, a good studless tire is a better all-around winter solution than studded, with the obvious exception being if you live in an area where icy roads are a frequent winter challenge. And if that ice is accompanied by hills, then the case for studded tires becomes stronger.

An RS5, snowy, winding roads, and a boot around a snow course on Nokian Hakkapeliitta R2s. An amazing finale to a truly unique experience.

About Haney Louka
A lifelong car nut, Haney Louka has been a journalist member of AJAC since 2001. He is a professional engineer and has been on AJAC’s Technology of the Year panel since 2010.
Follow me
You may also like
AdChoices
Latest Articles