Ever fancied yourself a motorcycle racer? Wanted to give it a crack? Couldn’t afford it? Me too. But there’s a resurgent racing series that might be the cheapest possible way to go motorcycle racing, and it might also be the most accessible.

Not only that, but it will teach you skills that will help you be a better rider back in the real world, on the street. Or at the very least, it will give you an opportunity to get your motorcycling jollies in a safe(ish) environment out of the way of traffic and unsuspecting pedestrians.

The adrenaline dump is as big as any sport I’ve been involved in and the fun level is immense.

The gist is simple. Round track, dirt bike, mud/clay tires, and Bob’s your uncle. It’s a little like speedway, but instead of 500cc monsters with no brakes that cost a fortune, Flat Track bikes can be almost bone stock. Actually, they can be completely bone stock if you don’t mind not winning. 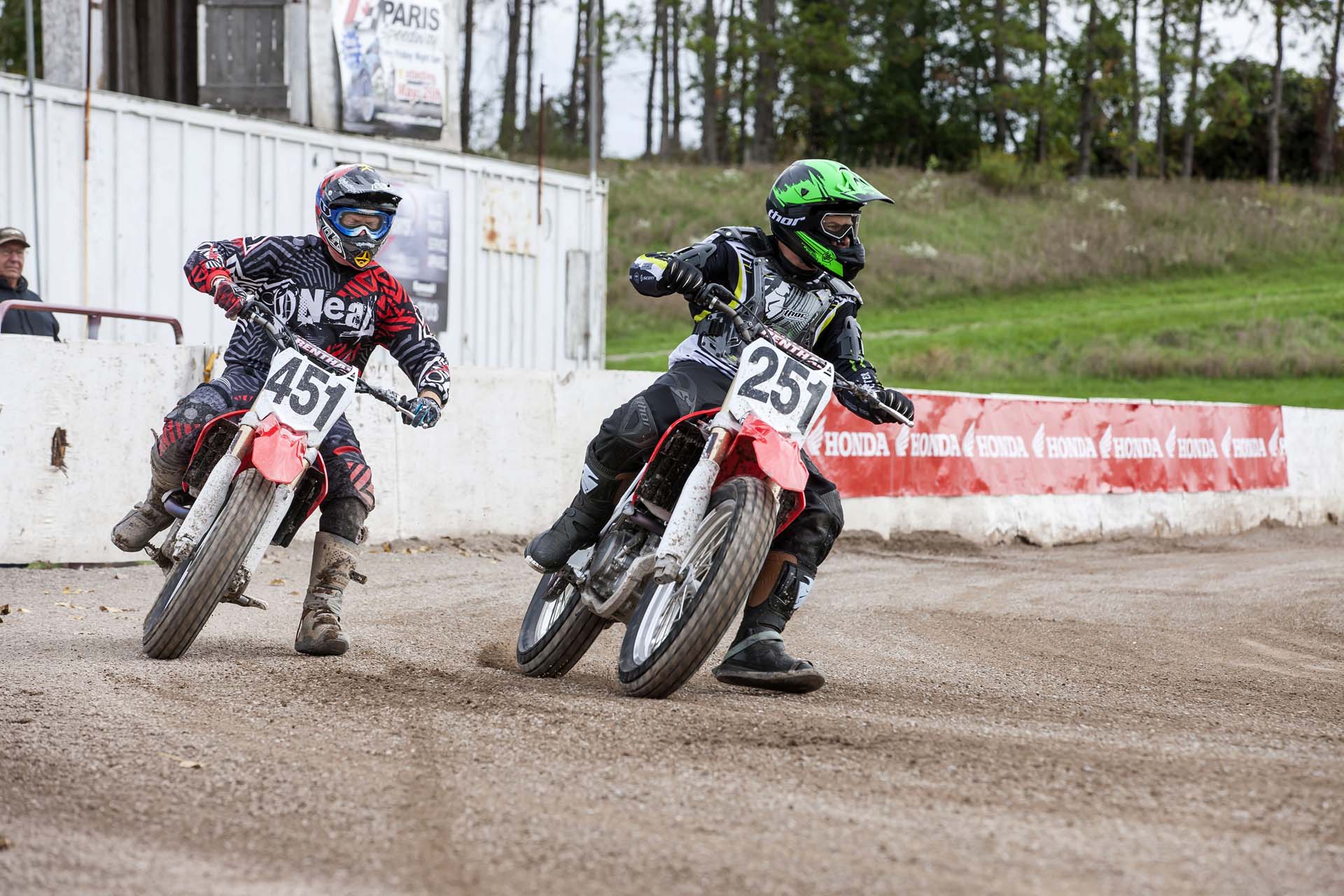 The racing is close and fierce but caters to all skill levels.

And entry fees are cheaper than most track and field meets! In the novice categories $20 will get you registered for a night of racing. $50 is the most you’ll pay and that’s for the expert category.

Aaron Hesmer, the managing director of Flat Track Canada gave us a crash-course on the techniques before pitching us out on the small Paris Speedway oval.

“Sit forward, way forward on the tank,” he told us. “You don’t have front brakes on these bikes…” 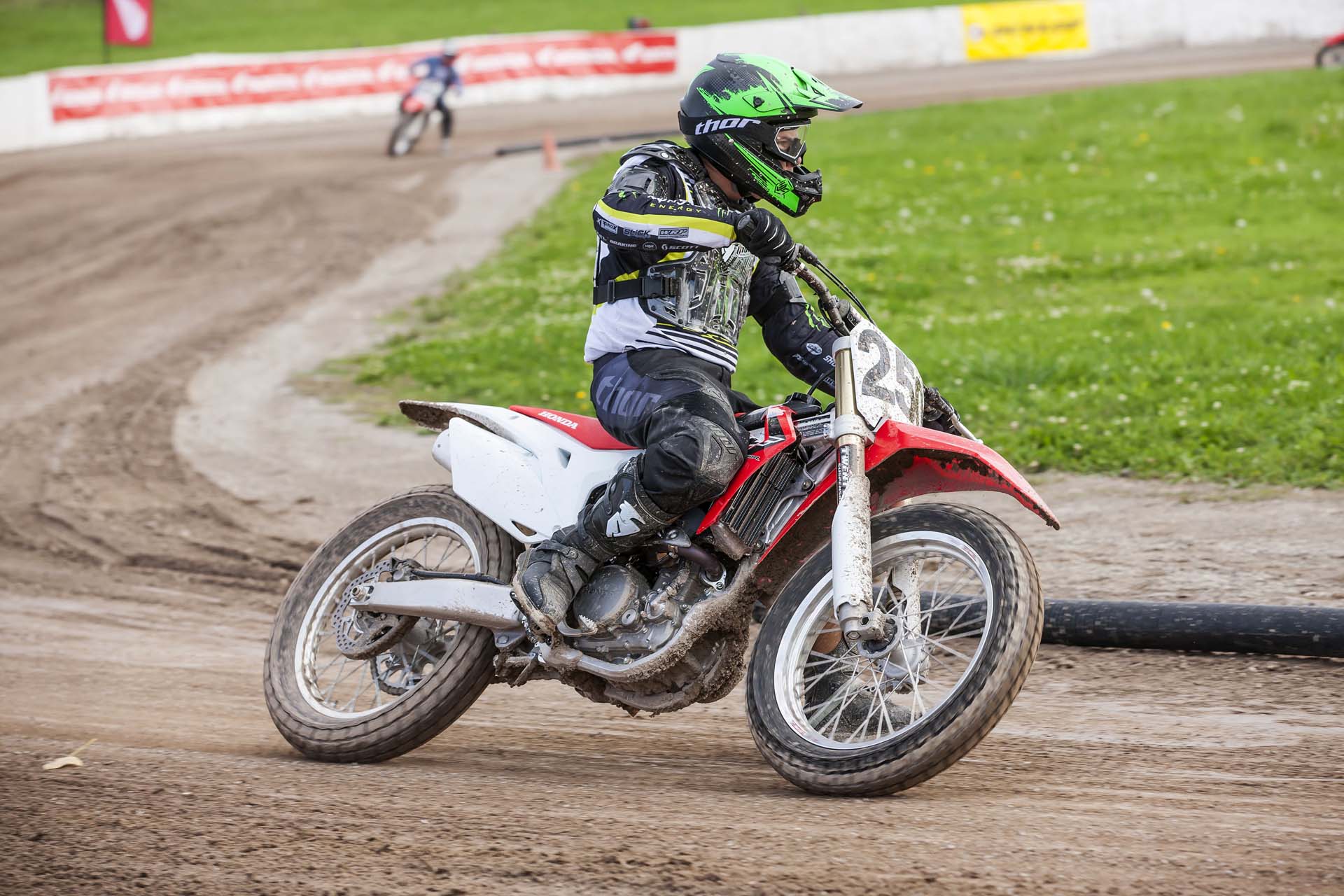 “Um, how do I stop? Or do I just ride into the fence like I do when I’m ice-skating?”

“No you roll off the throttle and turn the bike in, that washes off speed. When you exit the track you can stop with the back brake.”

Next, he taught us the correct flat track body language – and that was confusing too. You don’t lean off the side like a sport bike. Instead you push the bike over with your arms and sit on the outside of the seat, keeping your body weight centred and letting the bike do all the leaning. This allows the edge of the tire to bite into the dirt giving you grip.

Then, we learned about our legs. Keep your inside leg cocked to the side, your hip open, your foot pointed to the inside of the corner and let your metal sole scrape over the top of the clay, gently. If you need to push it down to regain grip/balance, do so.

Ever hung your leg out to the side at an awkward angle for an extended period? It’s murder on your groin muscles, and in this case we’re adding a heavy motocross boot and a steel sole to the equation. I couldn’t walk for a month.

For this lesson, we were running three different Hondas. A CRF150R, a CRF250R and a CRF450R. The 250 and 450 were both modified with a flat track racing kit including shorter-travel forks, 19-inch wheels with flat track tires and the removal of the front brake. The whole kit is $1,350 and takes a few short hours to install. It changes travel in the rear shock from 12 inches to 8 and lowers the bike, with a similar change up front too. The video below explains the conversion process.

The CRF150R was bog stock, right down to the knobbies. Brand new it’ll run you $5,699. The 250 is a cool $8,849 and the 450 runs to $9,799. For flat tracking you don’t need a brand new bike of course - you can buy any dirt bike really. – these were just the ones on hand. Flat Track Canada runs a fleet of them to help teach people the art and expand the sport’s reach. So successful has this approach been that numbers have increased tenfold in the past few years.

Of the three bikes the CRF150R was the most skittish, the knobbly tires scrambling for grip on the clay surface. The 450 allowed a lot more throttle steering and commanded respect but I found its heft and tall seat height intimidating. For me, the Honda CRF250R was a Goldilocks bike – and for the next five hours Honda couldn’t pry me off it.

Using the techniques taught by Hesmer I began building speed on the small dirt track – the Hondas were forgiving and confidence was growing – gas, gas, gas, roll off, tip in, push down, look at the exit, gas, gas, gas.

Then, just as I thought I was going really fast Flat Track Canada experts Steve Beattie and Doug Laurence came whipping by on their 450s. I’d like to say I was surprised, but I didn’t even have time for that. 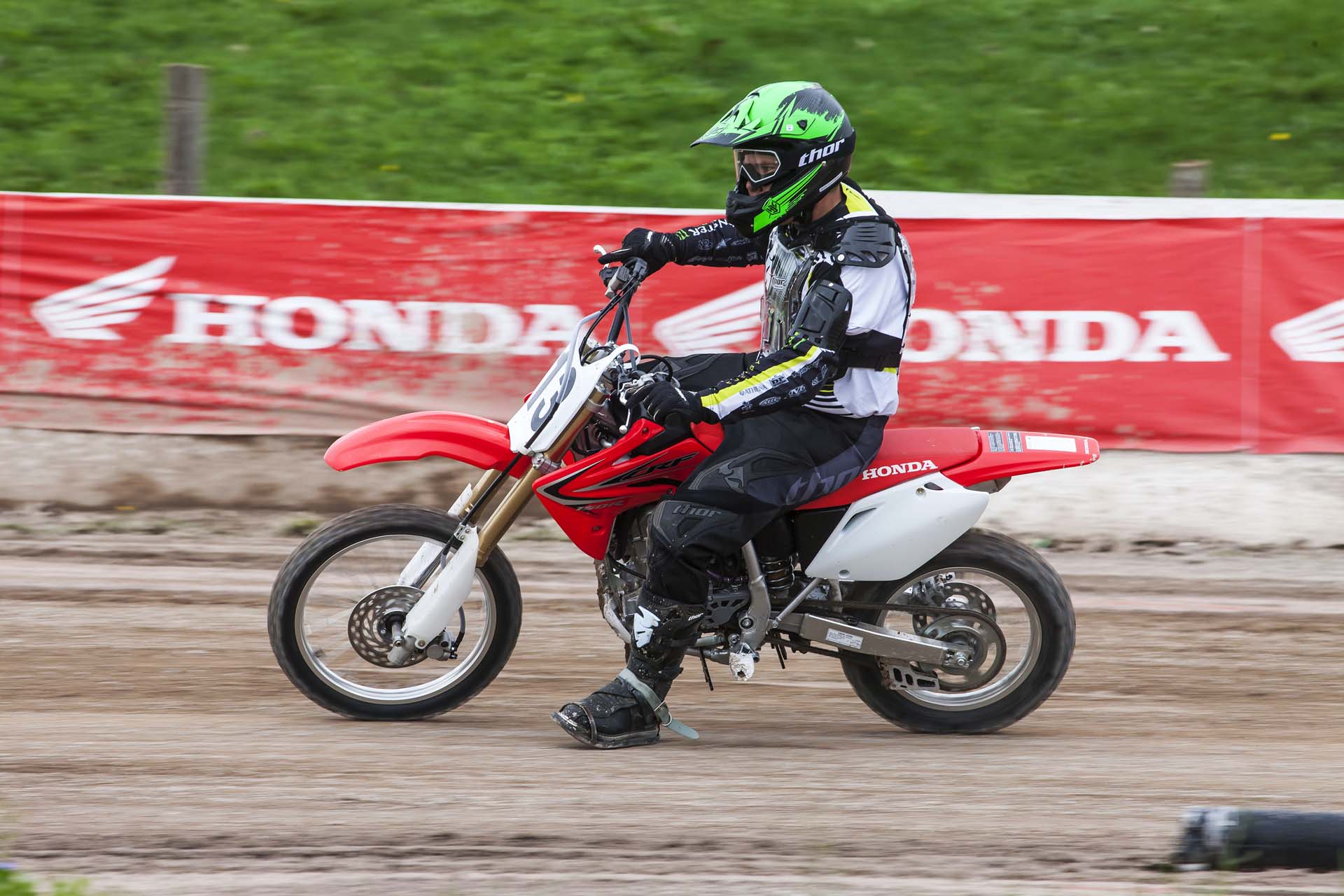 Doug Laurence is the current Canadian flat track champion, and Steve Beattie is from Twenty-Six Suspension. He’s the mad genius behind the suspension set up that our bikes were fitted with. Neither of them are strangers to extreme lean angles and wild slides – you could even hear them laughing in their helmets as they blew by.

I could only marvel at them with their bikes at extreme angles, bodies a natural extension, back tires roosting dirt as they drifted down the straights.

Bravely, I tried to go a little faster through the next turn. Tip in, maintain a smooth throttle, past the apex and GAS! – I crashed. In fact, I crashed three times that day. Everyone did, and that was part of the fun. Speeds are low enough for a novice and the clay forgiving so none of my minor falls had any sort of consequence either for the rider or (more importantly) the bike. Robust dirt bikes are perfect for this rough and tumble sport.

The nature of the beast also means that you don’t have an extreme repair bill if you do get things wrong. Most times, you can pick the bike up and keep on rolling and that’s important for people on a shoestring budget just out to have some fun.

You can get started in Flat Track by doing a school at Paris Speedway in Ontario. Everything is included  – pants, jackets, bike, helmet etc – for $179 plus a $40 deposit, or you can learn for $80 a session if you bring your own gear and bike.

Lesson information can be found at www.goflattrack.com and race information at www.flattrackcanada.com.

Fair warning though: Once you start, it’s hard to stop – and you won’t be able to walk for a month.