If you wandered through the New York World's Fair in 1964, Instamatic in hand, you would have seen all sorts of weird and wonderful glimpses of the future. An all-singing, all-dancing revue of folks dressed up like molecules? That was there. Exposed fusion reactor? Yep, that too. A dishwasher-like appliance that shredded your dirty plastic plates and then formed new ones at the push of the button? Very sensible.

There were video phones, and the promise of supersonic air transport for the masses, and for some reason that no one has yet been able to explain, every single food vendor from Italian to Swedish was selling Belgian Waffles. But there was also a car shown here, a simple little coupe that would go on to become one of the best-loved, most-enduring nameplates in automotive history. The Mustang.

1965 Ford Mustang fastback in front the Ford Pavilion at the 1964 World's Fair in New York.

To get some idea of the impact the original Ford Mustang had, you have to imagine the automotive scene in the 1960s. While there were British sports cars or huge land-yachts aplenty, there was little that came in the middle niche – even the muscle-car segment had yet to really come along as the Pontiac GTO was only just about to be introduced.

The original Mustang's comely shape was a revelation. It was small and sporty and European, but also entirely American. Early concepts like the T-5 had the look of a mid-engined Fiat X/19, but the actual production car was both more pragmatic and more attractive. Built on the bones of the Falcon and Fairlane, the Mustang offered 2+2 sports coupe performance with either a peppy six-cylinder or a rumbling V8. Initial sales projections were for 100,000 units a year, but in the first year and a half more than one million were made. The very first cars are considered 1964-1/2 models by fans as they tend to have a few quirks, but as the 1965 model year entered full swing, the Mustang was a runaway success.

The original Mustang was more sporty car than out-and-out sports car, and with the Corvette and GTO on the scene from GM, Ford needed something to compete. They decided to move the Mustang into SCCA road racing, but needed help navigating the red tape associated with the series. Enter Carroll Shelby.

Shelby, a rangy Texan with a knack for go-fast shenanigans and self promotion, was entering the busiest time of his life. His Cobras were already winning races left, right and centre, he'd been contracted to work on the Sunbeam Tiger, and Ford's Le Mans–effort GT40 racing team had also just landed in his lap. Getting the Mustang ready to compete in racing would have to be done quickly.

The result was the GT350, an iconic nameplate that echoes down the ages, and is even rumoured to be making a comeback. Painted white with two broad stripes, the fastback GT350 was sold to the public with a race-bred suspension and an engine that could easily be modified. The track version won the very first race it was ever entered in, and would go on to dominate its series right through the middle 1960s.

Following on the heels of Shelby's successful racers, big power started arriving with the Mach I and Boss models. The Boss 302 would see more road-racing success, especially in the hands of Parnelli Jones, and the mighty Boss 429 was king of the drag strip. And then it went all pear-shaped. 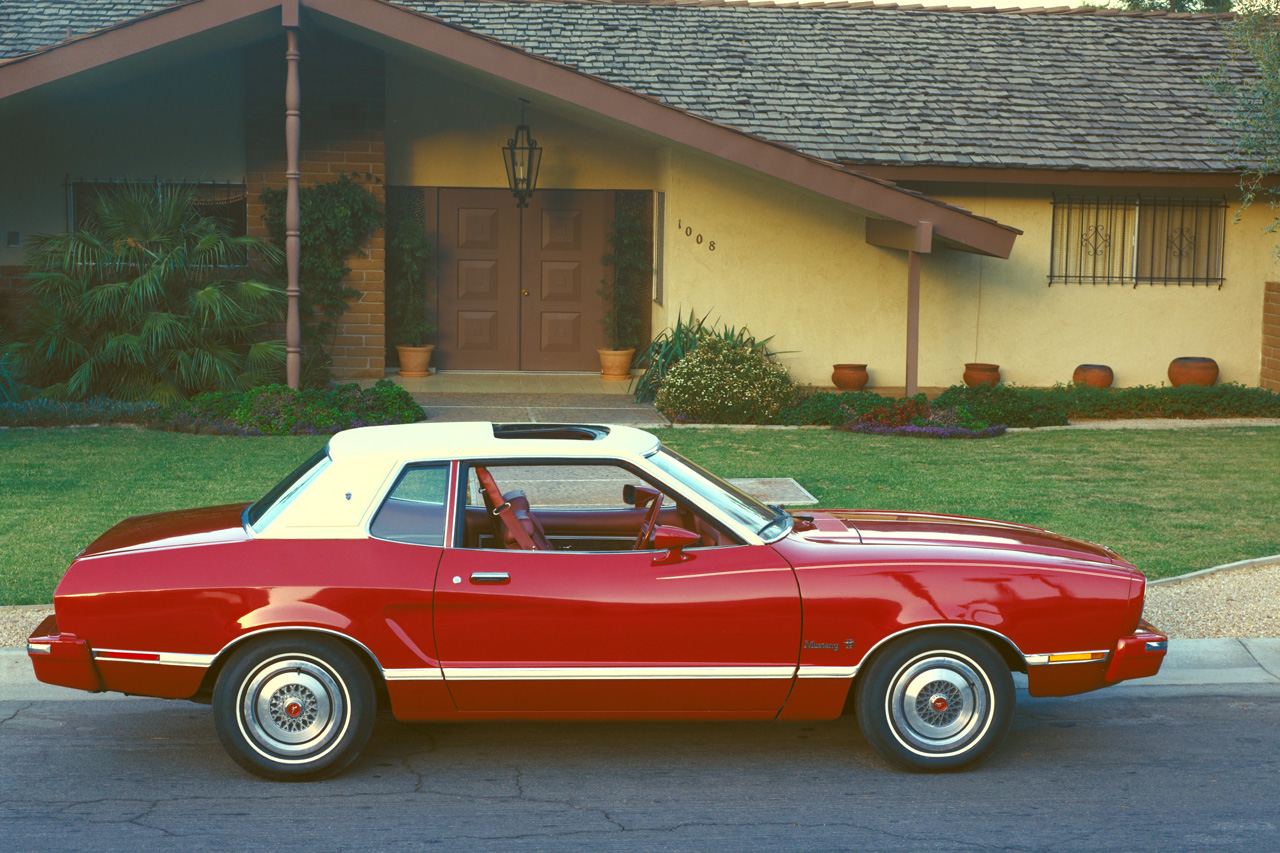 Anyone who lived through the 1970s would probably rather forget large parts of that decade. The music, the clothes, the giant sideburns – not a very good idea, any of it. Oh, and the cars were pretty bad, too.

The Mustang got fat, with a big nose and reduced performance. More luxo-coupe than hard-runner, it traded in its blue jeans and nomex image for polyester bell bottoms and an eight-track filled with Three Dog Night. As much as 400 kg was added to the curb weight, and with the saddlebags so loaded, Mustang sales slowed to a trot.

It wasn't a great decade for the Mustang, but it was a lucky one. Responding to the ballooning weight by calling for a lighter, nimbler car, Lee Iacocca just happened to introduce the more efficient Mustang II right before the 1972 oil crisis hit. As the other big hitters of the 1960s faded before new customer demand for fuel economy, the Mustang rebounded in sales.

It was survival of the fittest, but not of the fastest. Emissions and safety regulations meant that the Mustang was small but still heavier than the original, and while Cobra and King Cobra versions were re-introduced, they weren't exactly barn-burners. It would take the 1980s to put the Mustang back on the right path. 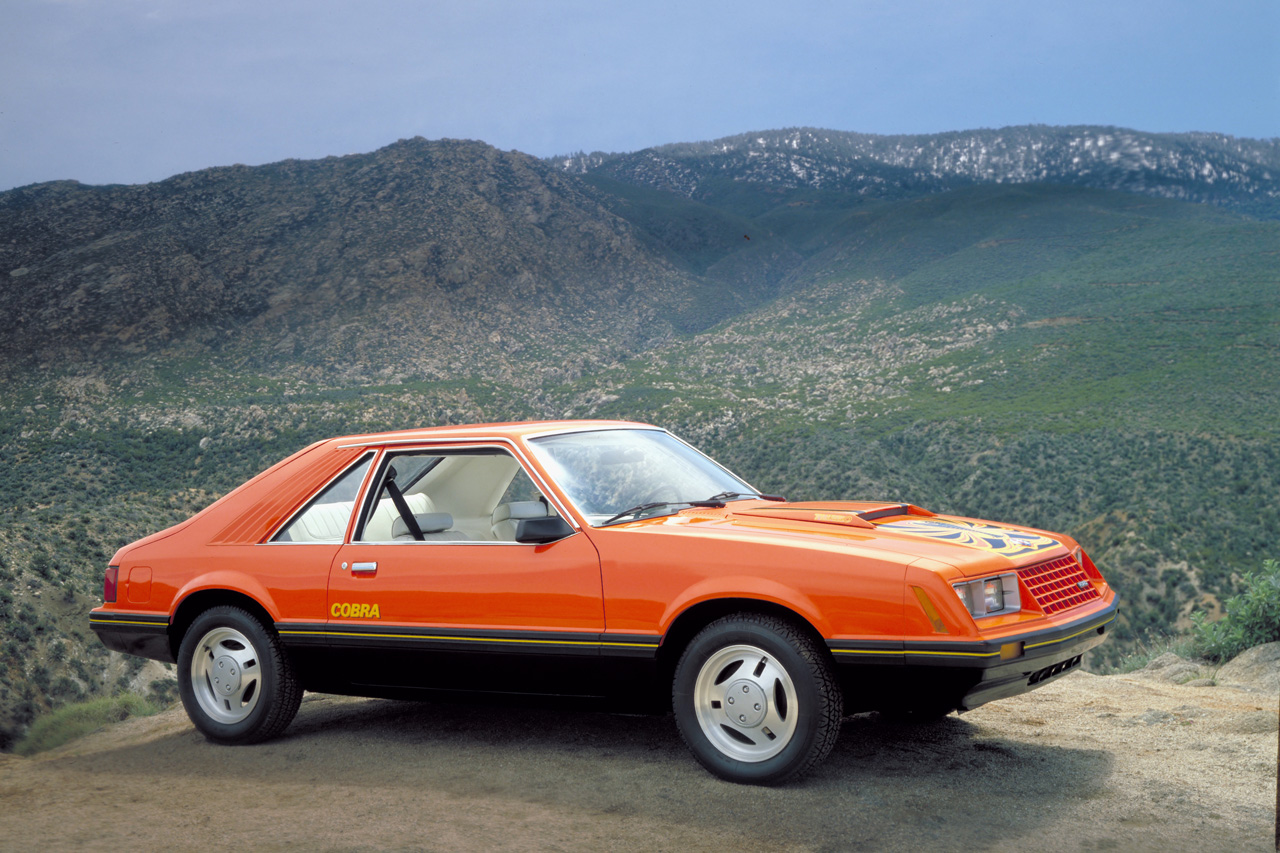 The Fox-body platform was the saviour of the Mustang as a performance bargain, and even today has enough of a following to rate its own websites and enthusiast magazines. Small, simple, and relatively lightweight, it would spawn an enormous aftermarket that would let you squeeze huge power out of the car for not much money. The pick of the litter was the V8-equipped LX, which had few options, but huge power potential.

As with nearly every manufacturer in the 1980s, Ford was turning to turbocharging in a big way, leading to the first turbocharged Mustangs. Power levels were initially similar to the V8 models, with a 2.3L engine derived from the Pinto boosted up to 132 hp. Hardly pavement-scorching, but at the time it was relatively potent.

Best known of the turbo-Stangs was the SVO, which boasted improved suspension and an intercooled turbocharger now making a respectable 175 hp (by 1986, Ford's Special Vehicle Operations were getting 200 hp out of the car). With an off-set hood scoop and double-level rear spoiler, these cars are immediately recognizable, and are destined to become niche classics.

However, the 5.0-badged cars of the late 1980s would become the ones that spurred Mustang demand into the 1990s. For one thing, they offered stellar performance as they passed into the hands of modification-crazy second owners. For another thing, well, just collaborate and listen. 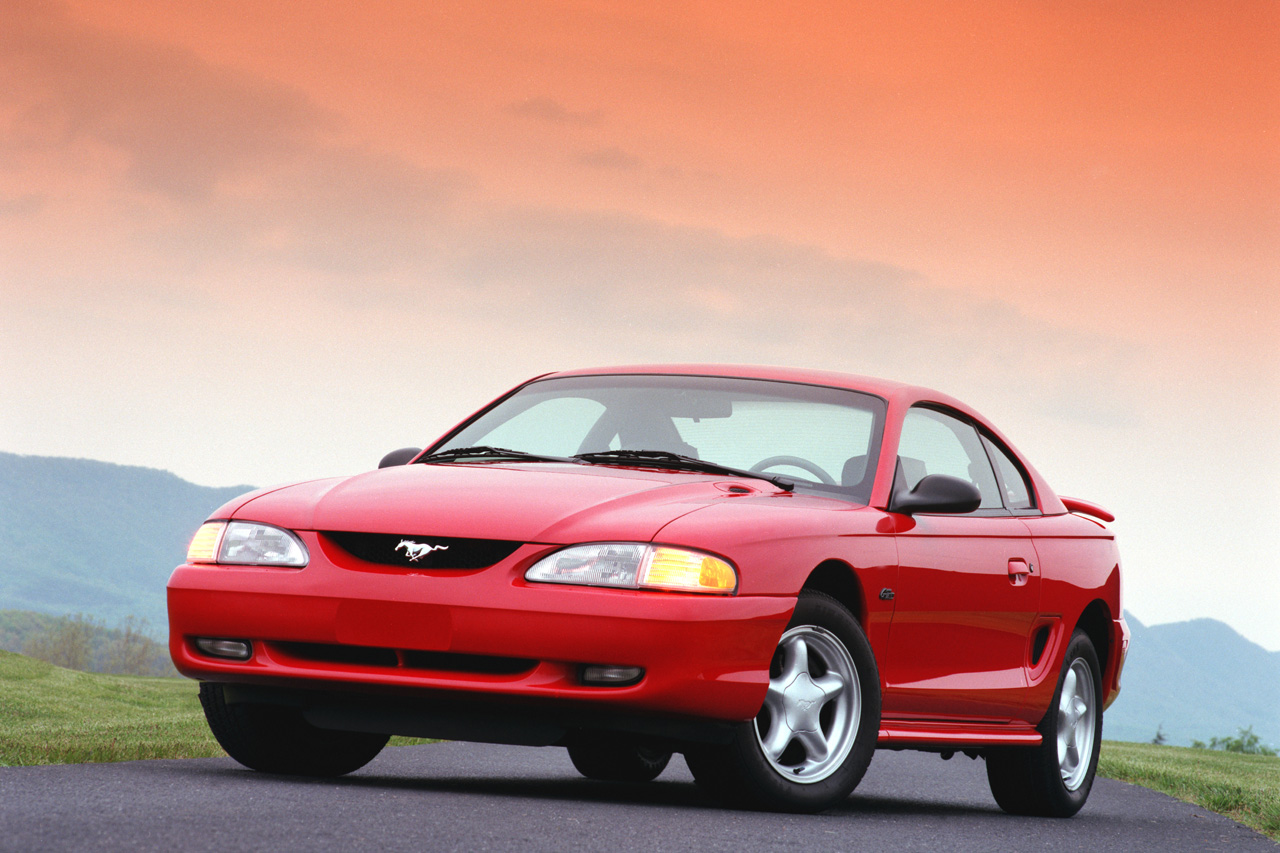 In the early '90s, if you were rolling in a five-point-oh, you were living the dream: word to your mother and so forth. With modified Mustang V8s hammering down the drag strip like a souped-up hi-hat, the performance credentials of the breed were back.

What's more, the Mustang also dodged a leg-snapping gopher hole in the form of the Ford Probe. Initially conceived as a replacement for the aging Fox-body, the front-drive, turbocharged Probe was actually a decent performer with an absolutely terrible name. Seriously, one of the worst names ever fitted to a car. Based on the Mazda MX-6, it would have meant the end of the rear-drive Mustang.

Happily, that never happened, and the Fox body continued right through the early 1990s, with the pinnacle of the breed being the 1993 Cobra R. Only sold to folks with an active racing license, just over 100 of these race specials were sold, making them very valuable today.

Replacing the Fox-body, the SN-95 Mustangs marked the fourth generation for the car. Slightly less-loved compared to other generations, these cars can still be built into powerhouses, and make for a popular track-day car, with inexpensive replacement parts and a huge range of aftermarket options.

The Cobras remained the best-of-breed for these late-nineties Mustangs, but it would be the next decade that would see some truly thundering war horses.

The fourth-generation Mustang had two heroes, the race-bred Cobra R of 2000, and the so-called “Terminator” Cobra introduced in 2003. While much is being made of the 2015 Mustang's independent rear suspension, it should be noted that Cobras in this generation were first to have this tech, but it's the supercharged 390-hp V8 of the SVT Cobra that was such a revelation.

Out of the box, the Terminator Cobra was plenty quick. Spend a few hundred bucks on stickier tires and it started absolutely, well, terminating the competition. Twelve-second quarter-mile passes were the norm, but the car could also be set up to handle a road course.

It was something of a last hurrah, as midway through the decade, the fifth-generation car debuted, bringing a retro look and more drag-race oriented feel. With 300 hp now coming from the 4.6L engine, this new 'Stang attracted many of the same buyers who remembered the original car. The modern version was much bigger, of course, but it retained some of that old-school feel.

Running a live rear axle hurt overall handling performance but kept weight, complexity, and cost down for this new car. It was seeming old-school technology, but it actually embodied the spirit of the original in that it kept the price of the Mustang extremely accessible. As the decade rolled over the odometer, critics of the live-axle setup would be forced to bite their tongues. 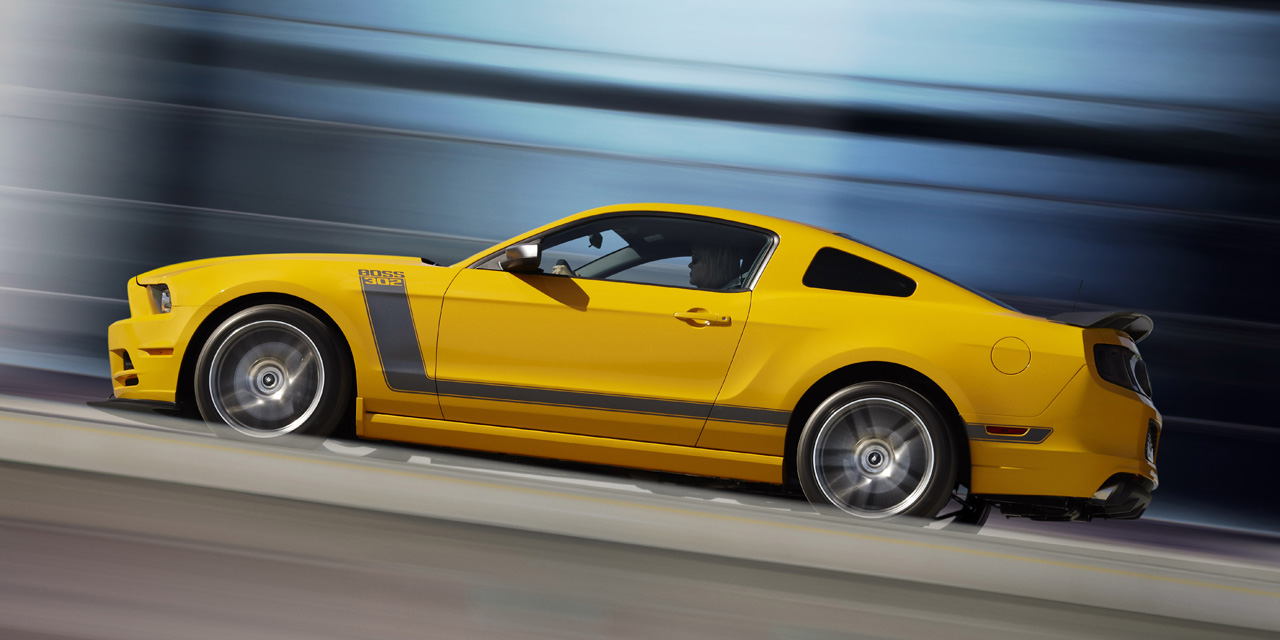 The king of the Mustangs was crowned with the designation KR, one of the craziest machines ever to wear the blue oval. The 540-hp Shelby GT500KR was undoubtedly the master Mustang in '08 and '09, but when 2012 rolled around, there was a new Boss in town.

2010 saw all Mustangs make a huge bound forward in the final furlong of the model. Even the standard V6 model became a legitimate performer, and the 2011 GT model's new Coyote V8 cranked out an impressive 400+ hp – and, like previous Mustangs, there was more to be unlocked through the aftermarket.

For factory performance, the Boss 302 was it – a compelling blend of handling, power, noise, and speed. It felt, sounded, and drove like a proper old-school Mustang, but could go toe-to-toe with a BMW M3 on the track. For sheer horsepower, the 662-hp Shelby GT500 was king.

The new Mustang handles better than ever, with the V6 even more of a backroad performer and a new turbocharged Ecoboost model resurrecting the spirit of the old SVO. The GT, though, that's the one that's still got the essence of a proper Mustang, with huge power and the ability to do a tire-smoking burnout at the drop of a hat.

It's a new era for the car, but it's still the same old recipe at heart. Everyday performance and power for the people, that's the Mustang. Pick your pony, and giddy-up!