Evolution of the Zamboni Evolution of the Zamboni

Update (Oct 8): We included the tweet about the funny looking Zamboni from TSN's Matthew Scianitti.

Well, the truth is, without the creativity and diligence of Frank Zamboni way back in the 1940s, that brief wait would instead be 10 times longer, and the clown 10 times more clownish.

The year was 1942, and Frank Zamboni had a problem. Frank, his brother and a cousin owned and operated a very popular rink in California. Although they always had a ton of customers, the problem was that three or four times every day they'd have to kick everyone off the ice so that a team of employees could spend more than an hour cleaning the ice. Basically, one guy would drive a tractor pulling a large blade that scraped the ice, while a handful of others walked behind him with shovels, brooms and buckets to pick up the snow. When that was done, they would then have to put down a layer of water, again by hand, using what was basically a wheelbarrow, a hose and a half-dozen squeegees. The process was, to say the least, very inefficient. Other rinks, including those of the NHL, used similarly slow and manual methods. As he watched, Frank knew there had to be a better way. 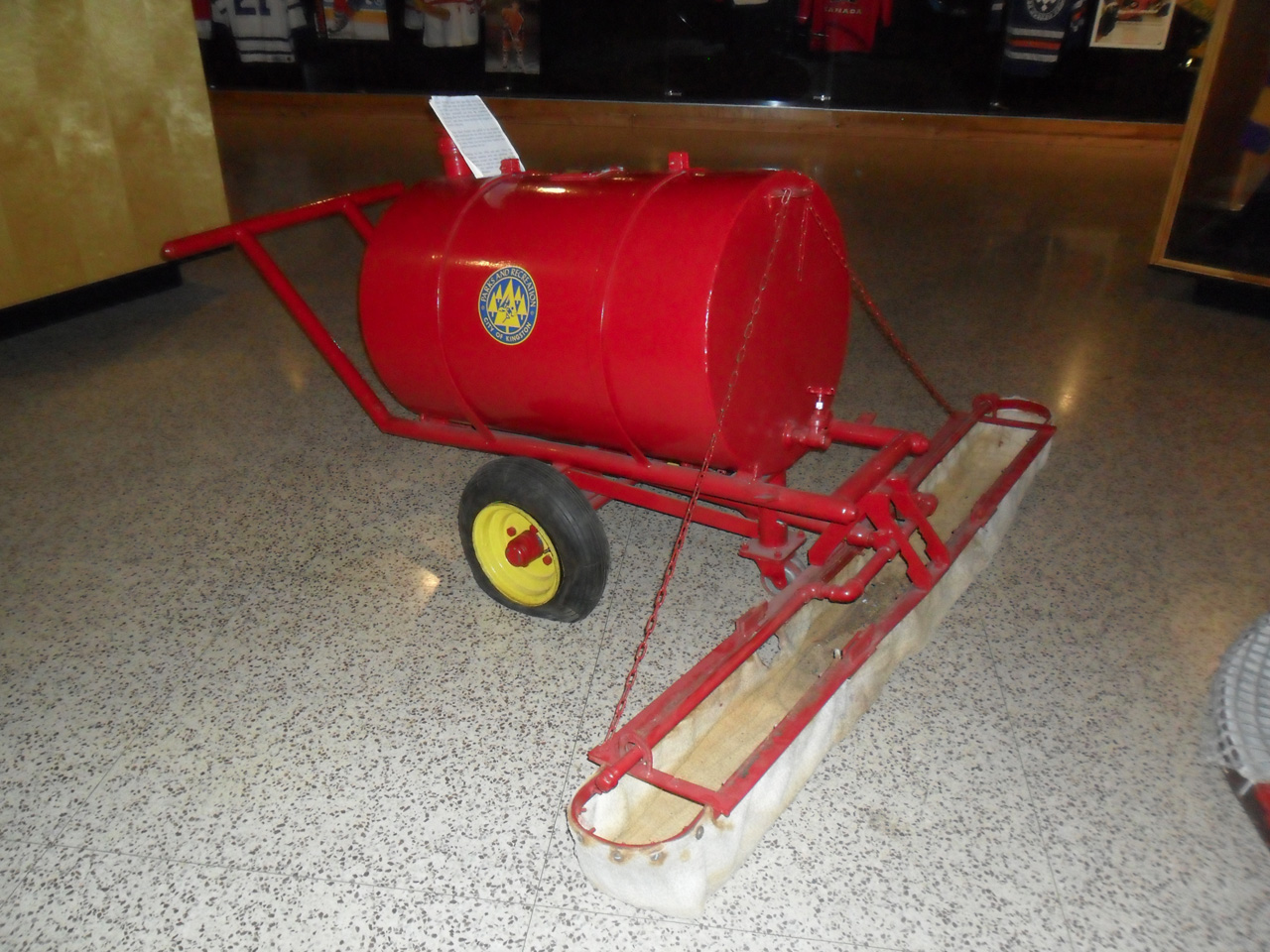 Fortunately, experience in two previous businesses had given Frank expertise in automobiles and refrigeration. In a stroke of brilliance, he combined these two subjects and over the next year hand-built his first prototype: a tractor towing a machine, which attempted to sweep the ice shavings. It could move faster than a group of men would walk, but unfortunately, it proved unreliable, and five subsequent years of tinkering led to little improvement. So, in 1947, Frank tore up this blueprint and started from scratch.

Instead of having two separate machines (tractor and trailer), he combined them into one, and while this attempt might seem at first glance a more difficult task, in fact it proved to be exactly the breakthrough he needed. Frank obtained a disused army truck, loaded water tanks in the front and an empty tank at the back to collect the snow. Army surplus also provided other key components: a Jeep chassis, front axle (it was front-wheel drive) and a Jeep engine. 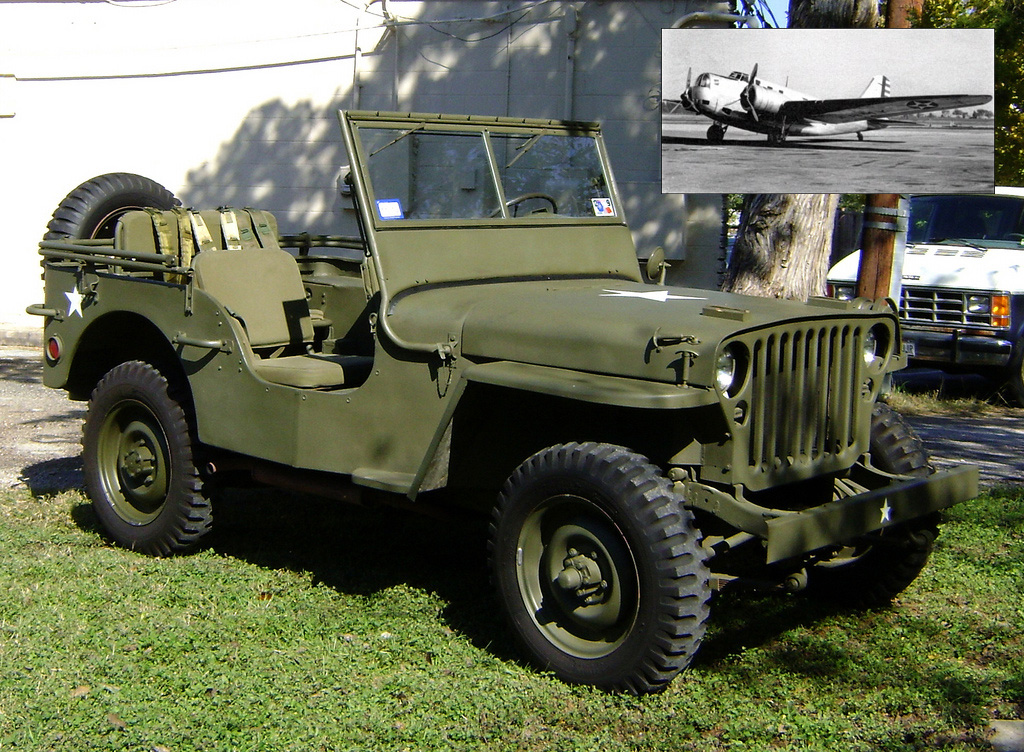 While this was an improvement, it too proved unreliable, especially with the driver struggling to control a two-wheel-drive vehicle on a surface that was by definition completely frozen over. So, once again, Frank started anew.

This time, Frank built a version that included four-wheel drive, powered by a cylinder from a Douglas bomber left over from the Second World War.

The key step, though, may well have been the inspired inclusion of an initial spray of water that helped clean the ice prior to the application of the final spray, creating a much smoother surface. By now, seven years of experimentation had passed, but by 1949, Frank could step back and admire his handiwork. In the years since, there may have been refinements here and there, including elevating the driver's seat to improve sightlines, and advances in technology, but Frank’s 1949 machine is, basically, the same as the thousands now found in rinks around the world in 2014. 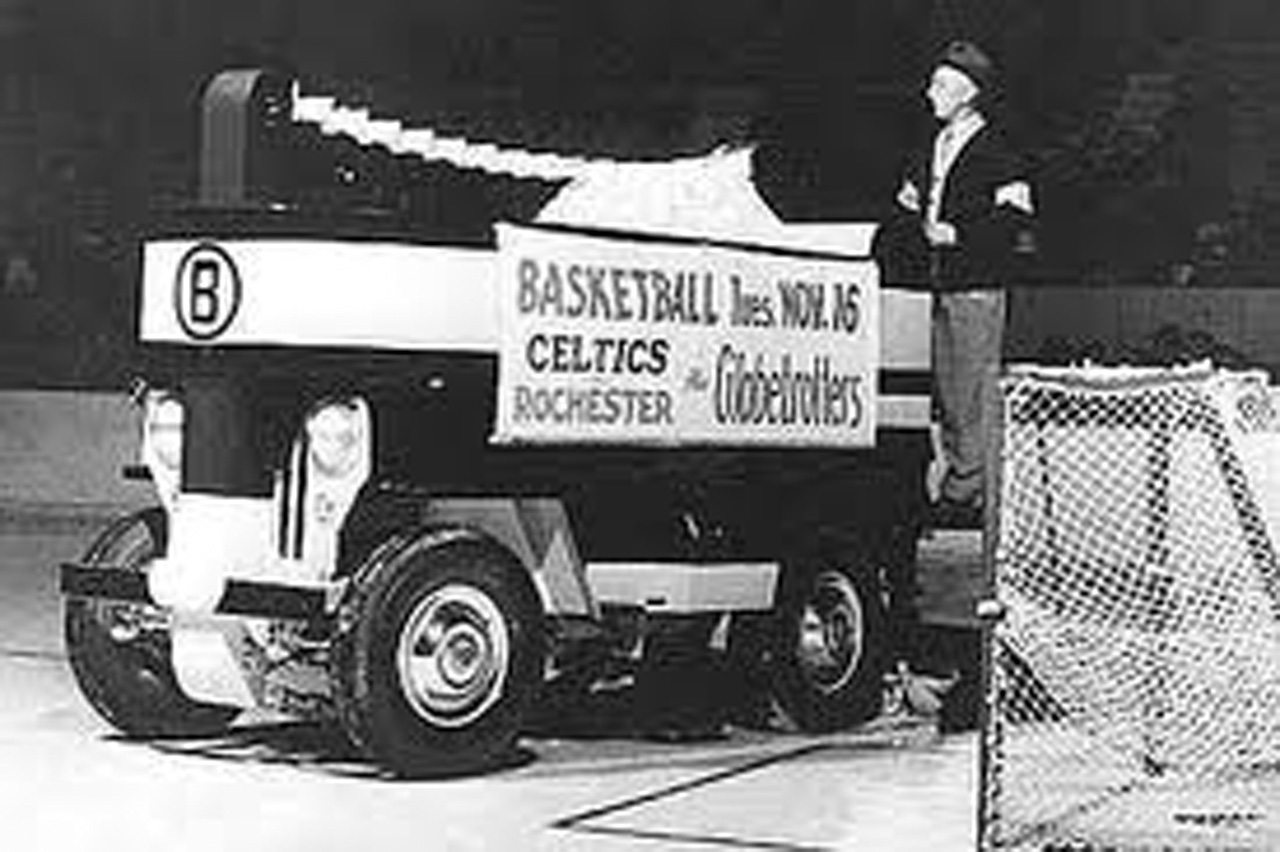 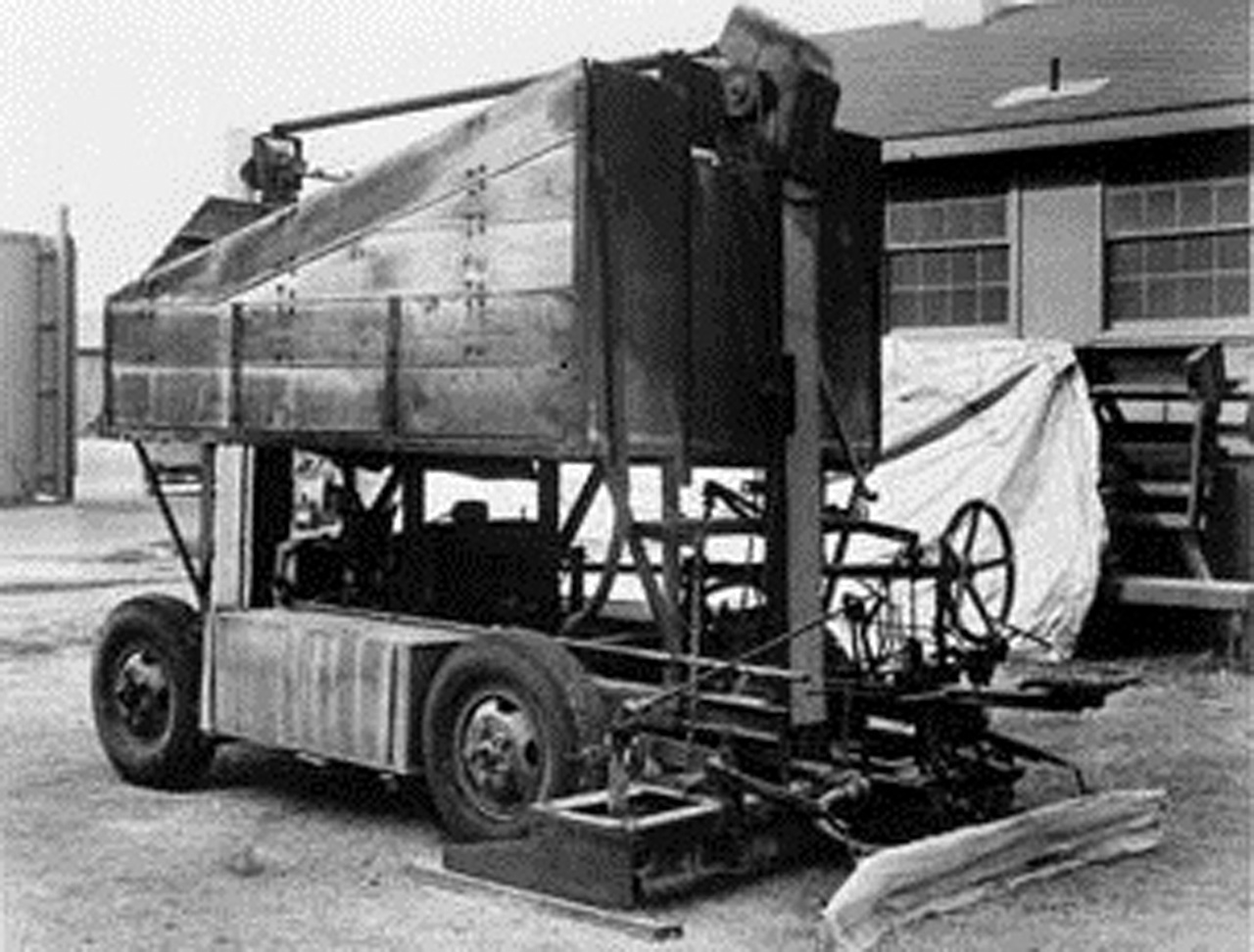 The Zamboni ice resurfacer (which is its official name – don't refer to it just as "a zamboni" lest you unleash the ire of starving trademark lawyers) got its break in 1950 when massively popular three-time Olympic figure-skating champ Sonja Henie happened to visit Frank’s rink and saw one in action. She soon ordered one for use in her travelling show. As luck would have it, the promoter of Henie's Chicago show was none other than Arthur Wirtz, owner of the Chicago Black Hawks. Enthralled by the novelty, Wirtz worried NHL fans would stay in their seats to watch the machine, instead of going to buy beer and popcorn during the intermissions. As a result, Wirtz didn't place his own order, but word spread and in 1953 the Boston Bruins became the first NHL team to use the machine during an NHL game.

Its worth was undeniable, and shortly after all the NHL teams – even Chicago – purchased their own vehicles. In 1960, the Winter Olympics purchased six machines, and from then on the popularity exploded. Within the next decade community rinks around the world had purchased their own versions, making hockey players wait only 10 or so minutes for their games, instead of more than an hour.

So the ice has a body odour problem? pic.twitter.com/ucGutnxOtA