SIENNA, Italy – It’s generally accepted amongst knowledgeable car folks that the Alfa Romeo Giulia is one of the hottest-looking four-doors on the market – arguably the hottest. But as much as we gushed about the sportingly sultry silhouette of the all-wheel-drive 2018 Giulia in our test drive of the Ti, you could argue that its sleekness slightly oversells the performance capabilities of the 280 hp four-cylinder under its hood.

Dropping a few gears and powering onto redline in the Giulia Quadrifoglio is like shouting a mighty war cry at the laws of physics.

Not so with the top-line Giulia Quadrifoglio. This is their top-line performance beast with a fire-breathing 505 hp turbocharged V6 under the hood. Even with more aggressive styling tweaks, there’s no over-selling going on here. That makes this most luscious of Italian sedans the perfect car in which to tag along on the famous Mille Miglia classic car sprint.

The four-day, 1,600 km Italian endurance event starts and ends a couple hours east of Milan in Brescia, a charming city that seemed too picturesque to be called an “industrial” town by my local co-driver.

The route meandered down an 800 km loop to Rome, with townsfolk often lining the route to admire and encourage the combination of classic (mostly) and modern sporting machines before heading back northwards, the cobblestone roads of Rome giving way to the winding back roads and greenery of Tuscany, before tip-toeing our way through tiny alleyways in the walled city-state of San Marino and its imposing fortress.

This Giulia Quadrifoglio’s 2.9-litre turbocharged V6’s engine note reverberated off the walls of the fortress’ tiny pathways, often with lots of revs at the urging of enthusiastic flag-wavers in the crowd, eliciting whip-cracking exhaust pops, especially in Race mode. Many of these roads were usually closed to vehicles, said my co-driver, which is part of the bucket-list appeal of driving in the Mille Miglia for Italians, despite the fact that the majority of driving takes place on scenic but public roads in Italy that they could drive any time, for free.

Therefore the annual event has to make it special for Italian drivers, he said, noting that even though lots of folks came from other countries, it is still a majority of Italian names and flags on the sides of the hundreds of vehicles that participate in the Mille Miglia (450 vehicles this year).

The Giulia Quadrifoglio and in particular the famed four-leaf clover badge on its fenders seemed to instantly communicate that this Giulia was something special, with folks pointing and chattering about it often, though there were other visual cues that this was not your usual sport package-equipped Giulia. Wider and now staggered wheels and tires plus a more hunkered-down suspension fill the wheel wells better, with P245/35ZR19s up front and P285/30ZR19 summer tires in back. A carbon-fibre front splitter and prominent rear wing showcase the lightweight material, more so than the body-coloured carbon-fibre hood and roof.

But this also means no sunroof in the Quad, at least on the two different versions of the Giulia Quadrifoglio we sampled.

Though we also had a day in the Stelvio Quadrifoglio on the event, the majority of our time over the course of the event was driving either of the Giulia Quads, one equipped with the paddle-shift eight-speed automatic that’s the only transmission available in North America, and the other in the manual six-speed version. And unlike the four-cylinder Giulia, which can be optioned with Q4 all-wheel drive, the performance-oriented Quadrifoglio is rear-drive only in the Giulia.

That may have some potential buyers eyeing less powerful but still performance versions of the Mercedes-AMG C-Class or Audi’s S4 instead. This same 505 hp drivetrain but with torque-vectoring all-wheel drive is available on the Stelvio, so while some purists may love the fact that the Giulia Quad sticks to racecar-like rear drive – and even turns off the stability control fully in Race mode to allow its owners extra tail-sliding ability – others may be disappointed that Alfa didn’t extend the AWD option to its flagship performance sedan as well. [Not me, RWD FTW! – Ed.] Inside the Giulia Quad, the sleek and sporty theme continues, but more subtly, with fewer differences from well-optioned Giulias. There’s available contrast stitching in either red or green or a mix of both in the Quadrifoglio, as well as a plethora of carbon-fibre trim throughout. All Quads offer a distinct mix of leather and Alcantara seats, with available Sparco lightweight seats that ditch the power controls fore and aft, as well as the heated element inside them.

The steering-wheel-mounted starter button is just to the left of the airbag, and is bright red in the Quadrifoglio, versus black in all other Giulias. That layout sound familiar? Yes, Ferrari places its red starter buttons now in exactly the same spot.

The driver sits in well-bolstered seats that hug drivers more than normal, but are reasonably comfortable for long stints at the wheel, without the bear hug of some sports car seats that make entry and exit a challenge, or make you constantly wonder if it’s time to up your workout schedule.

And there were plenty of long stints at the Giulia’s wheel, with morning departures around 8am and arrivals at the final checkpoints around 10pm most days throughout the event.

That gave us plenty of time to glance at the Giulia’s speedo that tops out at 330 km/h, with an Alfa-stated top speed of 307 km/h. Police were generally tolerant of speeding participants on the Mille Miglia route. Once we inadvertently passed our occasional police escorts at twice the official speed limit, and though we slowed down as soon as we spotted them, they didn’t seem to take much notice.

Granted, there’s no doubt that the sport seats and handling-oriented suspension settings make for an occasionally rough ride, and likely louder than the regular Giulia or some rivals as well. We noticed that it was just a tad sharper than the Stelvio Quad, in braking ability and steering response, yes, but also when accelerating hard, the Giuliua’s head restraint providing a much firmer bump to the back of the head than the Stelvio’s plusher head restraint on the passenger side. So one could argue the Stelvio is a little more spouse-friendly. But then this is a car for folks looking for a thrill ride, and thrills are the Quadrifoglio’s specialty. Dropping a few gears and powering onto redline in the Giulia Quad is like shouting a mighty war cry at the laws of physics, its engine loudly hurtling towards its 6,500 rev limit and slightly beyond. To go along with those 505 ponies rushing you forward, there’s also 443 lb-ft of torque that come in for service at 2,500 rpm, meaning that you often don’t have to downshift to find worthy power, though chances are you will anyway to feel that addictive crackle of sound and straining acceleration.

There are four drive modes in total, with “d” as a sport/dynamic mode, “n” for normal comfort-cruising, and “a” for what’s supposed to be a less-aggressive mode for nastier weather conditions, which starts the automatic in second gear to help prevent wheelspin. Interestingly, all these are marked with single lowercase letters on the rotary dial, except for the blaring “RACE” in all caps.

A gaggle of young enthusiasts came up to our window excitedly at one point and literally begged us to put it in that RACE mode, clearing out any onlookers in front of us in an attempt to witness an acceleration run of the Giulia right in front of them. Though they didn’t observe its full 3.8 second 0–97 km/h capability, they cheered loudly as we powered away from them. 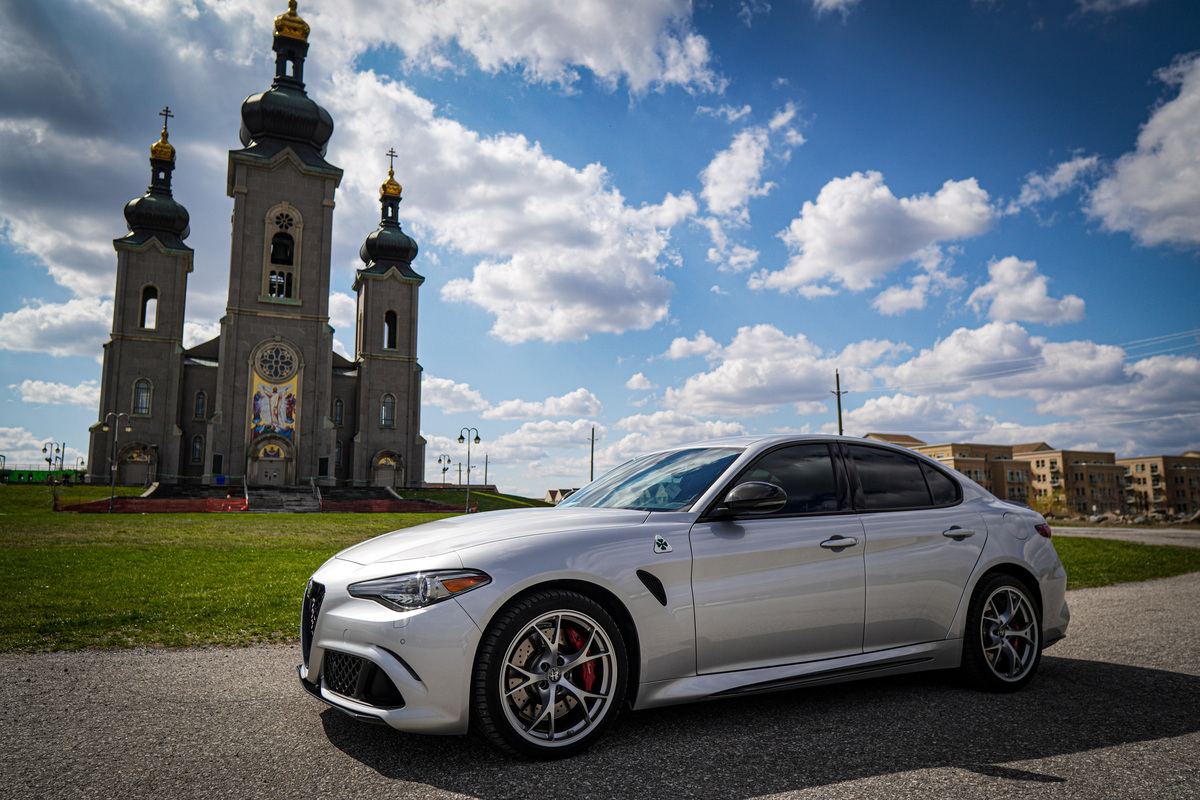 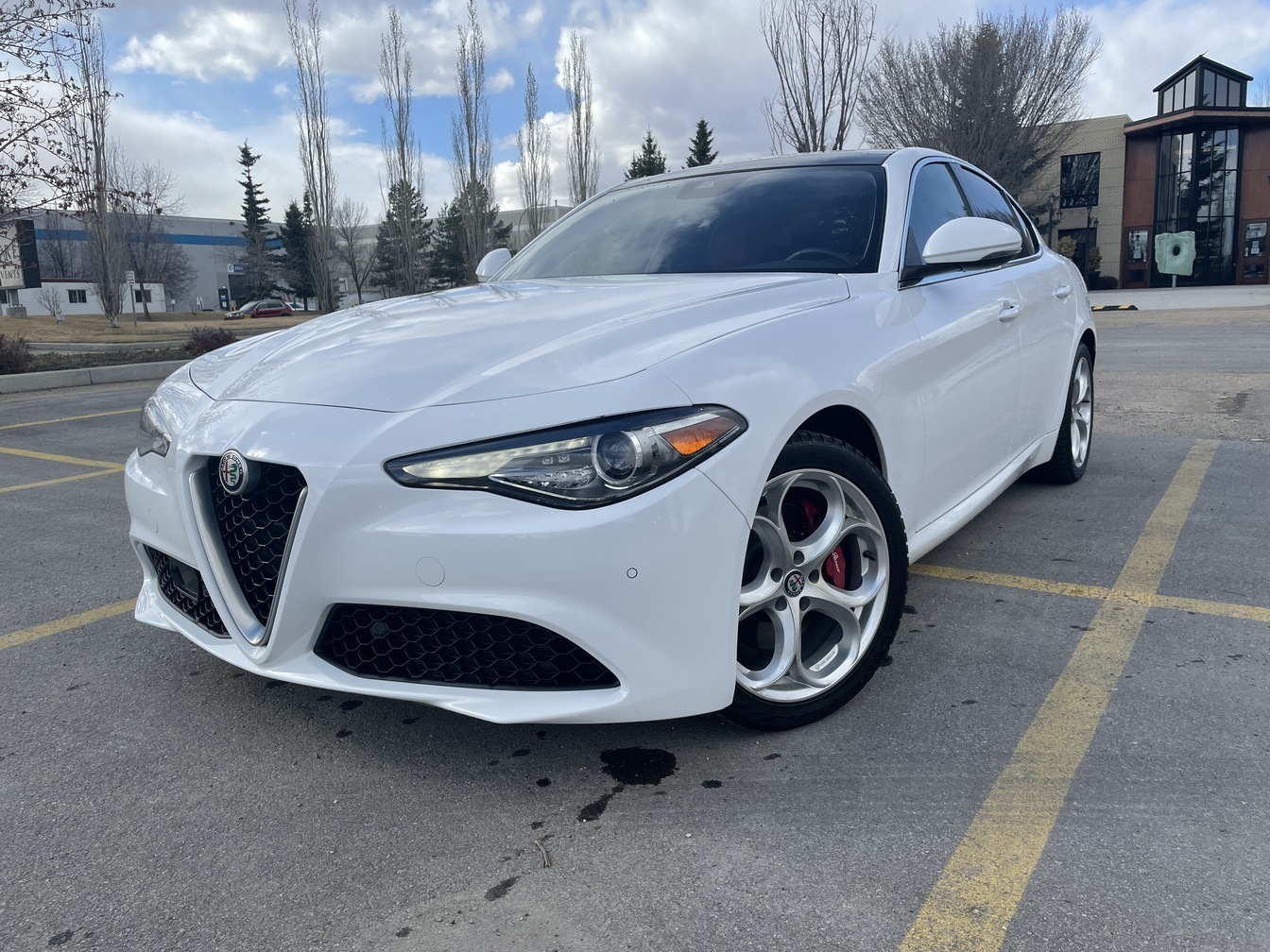 Handling is crisp at all times, its telepathically clean steering feel making for easy placement of the front wheels, even when pushing hard. Sure, the Giulia Quad may not provide the creamy ride some prefer in their $90K luxury sport sedan ($89,995 base in Canada, or roughly $95K as equipped on our Euro testers), but the compromise seems reasonable in a super sports sedan.

Another run-in with Italian youth saw two young teenage boys waving at us from a modified three-wheel contraption that was basically a tiny motorcycle fitted with an enclosed cabin and mini-pickup bed in the back for work. One nearly jumped over the other to take photos of the Giulia, and they eventually stopped near us to snap some photos of nearby passing classic cars, while we snapped a few of them and their machine, which they could lift and turn around on the spot.

All this attention for a modern 2018 Giulia Quadrifoglia in the midst of literally hundreds of classic sports cars highlighted to us that, even in Italy where Giulias are much more commonplace, that four-leaf clover on the fenders and speedometer of the Quad signalled something extra special.

The Giulia in general may be more of a rare visual treat in North America, but whether you agree it’s the best-looking four door sold in our market or not, the Giulia Quadrifoglio is a worthy embodiment of the passion and style that Alfa Romeo wants to symbolize in North America. And with 505 hp and what Alfa calls the fastest sedan around the Nürburgring, the Giulia Quadrifoglio now has the performance chops to back up its super sporting looks.