At times, it’s surely been a bit of a tough sell to convince buyers to ante up for a new Lexus ES, given the perennial entry-level luxury sedan is so closely related to Toyota’s stalwart mid-sizer. But when the magnificent new 2018 Camry hit the market this year, it was a wholesale improvement over not only the outgoing family sedan, but was also dynamically superior to the ES 350. Justifying the slightly larger ES became even more challenging.

Where the new Lexus ES makes its strongest case is in the interior.

Unsurprisingly, it was only a matter of time before the Lexus ES sedan was updated, and here it is, having enjoyed a similarly dramatic update over the previous generation.

Lexus is on a charge to broaden the brand’s appeal to a larger market, which apparently means adding improved driving dynamics and a sportier visage to all of its models. This is a reasonable direction given that the upscale brand had already established its prowess in making refined and comfortable machines, widely regarded for their exceptional build quality. Past ES models were known to be a safe-bet purchase, though far from exhilarating to drive.

Starting with more dramatic styling, the 2019 Lexus ES borrows plenty from its LC500 coupe stablemate, especially in the nose. It’s undeniably aggressive, and Yasuo Kajino, Project Chief Designer, calls the look “provocative elegance” – but depending on personal tastes toward the gaping-maw-look Lexus has applied across the board, that may or may not be a good thing.

The profile is reminiscent of the new LS500 sedan, and the rear is clearly an update of the earlier ES generation.

For the first time, Lexus is offering the athletic F Sport treatment to the ES 350, which adds a more aggressive valance, subtle rear spoiler and 19-inch wheels, along with the obligatory F Sport badging. The new F Sport–exclusive Ultra Sonic Blue Mica 2.0 paint is stunning to behold.

Lexus sought class-leading handling and power to go with the ES’s new styling. Given that this model competes against other front-drivers like the Nissan Maxima, Buick Lacrosse, Kia Cadenza, and Lincoln MKZ, it is not expected to be an outright sport sedan. That role is filled by the IS and GS models in the Lexus line up.

Still, with a new chassis that rivals the rear-drive LC coupe and LS sedan for rigidity, and notable weight-reduction in the structure, it is reasonable to assume the new ES will be a much more dynamic handler than previous generations. Lexus officials set up a detailed preview of the model here in California coinciding with its official public debut at the Beijing Motor Show this week, where we could get behind the wheel – but not drive it away.

The F Sport trim includes an Adaptive Variable Suspension setup like that found on the LC coupe to help further the sportiness by enabling 650 levels of damping force at each corner.

The 2019 ES 350 is powered by a 3.5-litre V6 engine that dispenses 302 horsepower and 267 lb-ft of torque, just as it does in V6-equipped Camrys. These numbers represent an increase of 34 hp and 19 lb-ft compared to the 2018 ES 350, and are expected to be one of the car’s shining jewels, just as it is in the Camry. Lexus has added an Engine Sound Enhancement feature in F Sport models when in Sport+ mode that digitally magnifies engine noise, intended to further the sportier driving experience.

Power is directed to the front wheels (no all-wheel-drive option is available) through an eight-speed automatic transmission, which is expected to help reduce fuel consumption.

ES buyers looking for greater fuel savings will want to opt for the ES 300h with a fourth-generation Lexus Hybrid Drive system utilizing a 2.5-litre, four-cylinder engine and a new electric motor that is both lighter and more powerful than before, combining to deliver 215 horsepower. Fuel consumption figures are not yet finalized for either ES model; Lexus estimates the ES 300h’s combined rate to be an impressive 5.3 L/100 km. 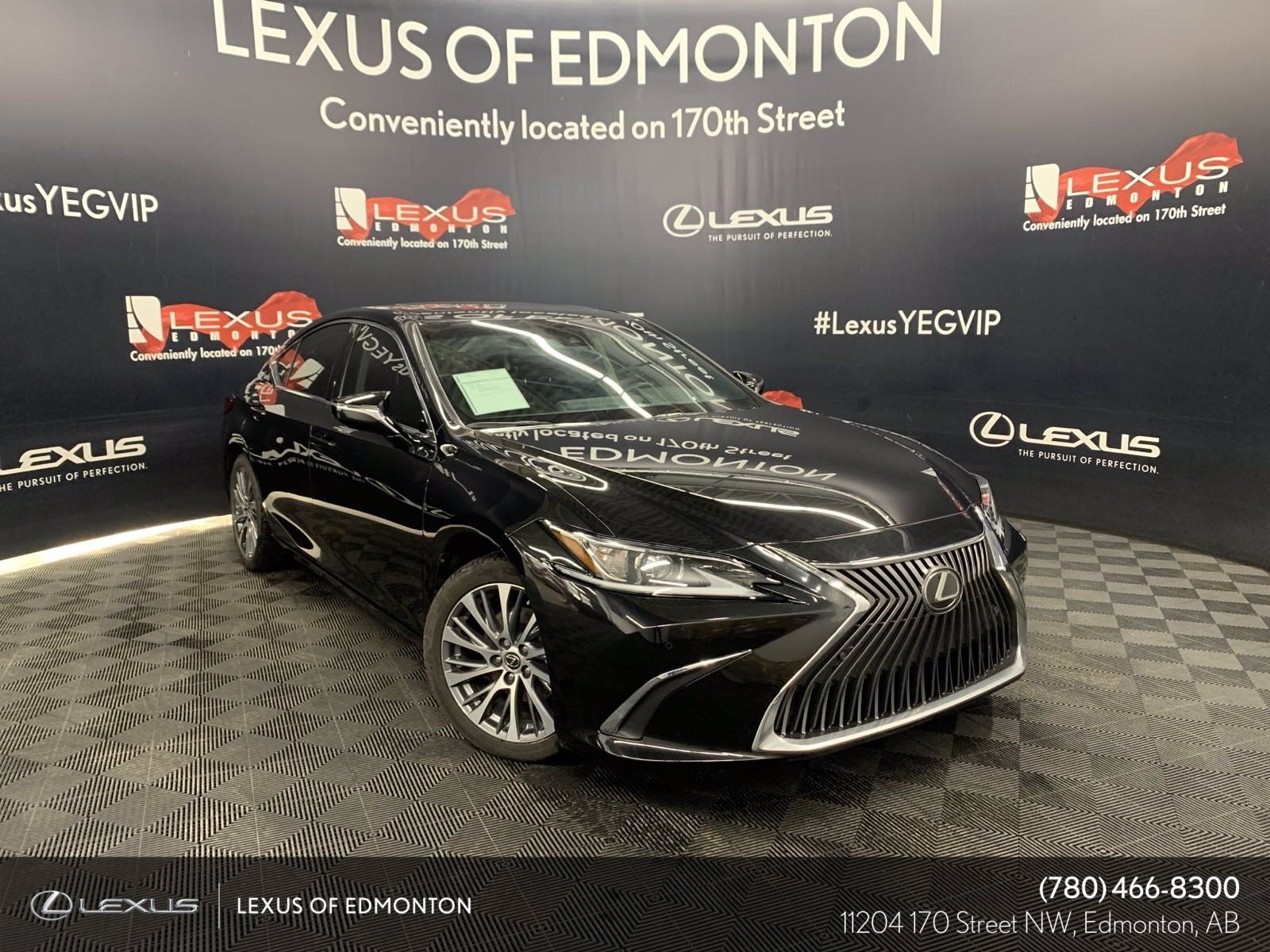 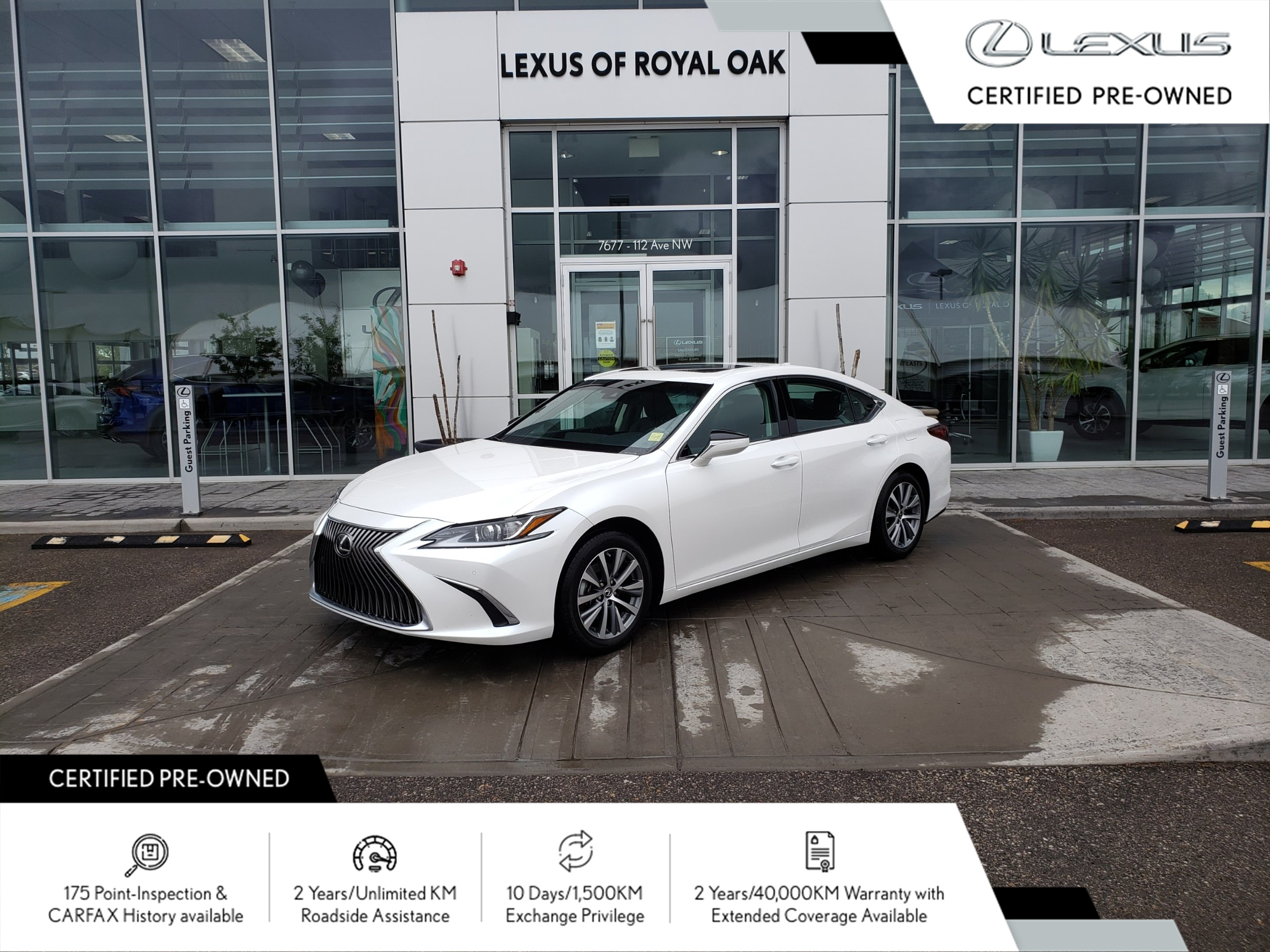 Lexus claims the new hybrid system more closely mimics a traditional gas engine in terms of driveability, and the nickel–metal hydride battery is now mounted underneath the back seat so as to not reduce cargo capacity.

As expected, the new ES incorporates more active safety functionality than before, as part of the new Lexus Safety System+ 2.0. Among the system improvements, Lexus has made the radar system more sensitive to improve nighttime pedestrian detection. A daytime bicycle detection system has also been added as part of the Pre-Collision System, designed to identify an on-coming person, machine, and now bicycle.

All of this clearly sets the new ES above any previous generation models, but still sounds awfully similar to cousin Camry. Where the new Lexus makes its strongest case is in the interior.

Aside from more stringent build processes including laser welds, the most impressive part of the new ES 350 is its cockpit. This is a place designed to put the litany of information available to a driver within easy glimpse or reach; the rest of the interior is intended to provide an open and airy environment for passengers.

The new ES has a longer wheelbase than before, lending to greater rear-seat legroom; so much so, in fact, that Lexus claims there’s more rear legroom than in their LS full-size sedan. Despite a more rakish roofline, a lower hip-point means rear headroom is not sacrificed for style.

Lexus has fitted the F-Sport with more aggressively bolstered seating than in the other models, especially in the front, but despite their sportiness, they’re supple and very comfortable.

The cockpit is dominated by the 12.3-inch touchscreen for the infotainment system (base model machines make do with 8-inch units). Its use is straightforward and intuitive, offering bright, crisp graphics. What’s more surprising (and long overdue) is the first implementation of Apple CarPlay in a Lexus product. Android Auto remains conspicuous by its absence, but at least iPhone users should be happy and in the United States, Amazon Alexa is also available.

Given how great the new Camry is, it’s unsurprising the new Lexus ES 350 and ES 300h look to be dramatic updates to the popular entry-level luxury sedan from Lexus. Now, thanks to the implementation of the adaptive suspension, a properly luxurious interior, and even Apple CarPlay – not to mention the superior dealership experience and coveted “L” badges – the ES 350 makes a more compelling case over the Camry – and its direct competitors – than it did previously.

If more dynamically and visually enticing machines are the way to ongoing relevance and increased sales in the entry-level luxury machine segment, Lexus should see a pleasing uptick to its robust ES model sales with this new machine.

The new 2019 Lexus ES 350 and ES 300h go on sale in Canada in September of this year. Pricing will become available closer to the model’s release date.