This just in from Sweden! The all-new, XC60 is the latest product by Volvo aiming for a shakeup in the luxury utility game, and maybe, one that will replicate the success of its very award-winning big bro, the XC90.

There’s little to zero need to worry about traction while driving through anything milder than “Storm of the Year” conditions.

The tester was a 2018 Volvo XC60 T6 R-Design – that is, an XC60 of extra sportiness offered as a sub-model with its sights locked onto an enthusiast shopper lusting for additional firepower and handling and all the glory of rocking a go-fast Volvo through the wintriest of settings.

And, in both R-Design and other variants, XC60 puts at least two of Volvo’s s most valuable current assets at the driver’s disposal.

The first of these is the cabin, which you may remember from such vehicles as the XC90, S90, and V90. If you’ve seen one, you’ve seen them all: same big central touchscreen. Same digital instrument cluster. Same centre console. Same control layout.

The giant touchscreen virtually eliminates dash buttons, working towards a clean, simplistic, elegant, and tidy look. The materials and finishes are upscale and unique, and a few Easter-eggy touches are applied. One of these is the dash trim, to which is imprinted a tiny Swedish flag, which is a plus.

So, XC60’s cabin does three important things. First, it makes the XC60 feel rich and upscale and fully on par with its sticker price. Second, it does its own unique thing in generating a one-of-a-kind driving atmosphere, mostly via unique surroundings. And third, it provides a healthy dose of high tech, but without being overwhelming enough that you’re pretty sure you’ll need to hire a calculus prof to figure out how to set the clock. It’s as minimalistic as this much techy knick-knackery can probably look.

The second of XC60’s most valuable assets comes bolted behind its prominent grille, itself flanked by a set of headlights that look just a tad bit ticked-off. Volvo’s 2.0L four cylinder runs both a turbocharger and a supercharger for a big-boost 316 hp – a healthy dollop of sauce in something about the size of a Nissan Rogue. She rips something fierce when asked, too. Too bad about the sound though – get this little engine cooking, and it’s no more menacing to listen to than a Hyundai Tucson.

With all that power (low-end torque, especially), even teensy throttle inputs get the XC60 surging ahead in a smooth hurry. Heaps of power are available from very low revs, and the supercharger and turbocharger fill in for each other – the strengths of one compressor compensating for the weaknesses of the other. It’s managed so smoothly that the driver doesn’t feel anything more than a creamy thrust-wave swell up when the throttle is applied.

You’re hard-pressed to hear either compressor, though the supercharger whines delightfully in extreme cold. On that note, the tester fired up like a champ at 33 below after 3 days parked with no block heater plugged in.

Power is routed through an AWD system that’s expert at communicating that it knows what’s up, at all times. With a set of (advised) Michelin X-Ice tires, and I found no issues with traction, even in inadvisably deep snow. The system is virtually invisible while divvying power to each wheel, always seems to know where traction is and isn’t, and proves consistently skilled at extracting traction from even challenging surfaces, without detectable fuss. At lower speeds in deep snow, attentive drivers will feel the XC60 working some single-wheel braking to help keep it maneuverable. There’s little to zero need to worry about traction while driving through anything milder than “Storm of the Year” conditions.

Greasy hard-packed snow, dry pavement, or a combination of the two passing beneath each tire in a split-traction stop do little to kerfuffle the XC60’s classy braking. Drill the left pedal, and you’re stationary, fast, in a straight and steady line, virtually every time. Even in severe split-traction stops from higher speeds, there’s little more than a slight squirm before the XC60 stabilizes itself. Again, and as with the AWD system, it’s all about leaving the driver feeling well supported in nasty weather. Headlights are nicely set up. The LED elements soak the road ahead with clean white light, output evenly saturates the effective range of illumination, and peripheral light output into treelines and culverts is decent. If you’re adding an XC60 to your Volvo fleet, note that the S90 and XC90’s headlights reach further overall, but the XC60’s headlights are potent and well-executed nonetheless.

Wipers use a built-in spray-bar, so every drop of washer juice goes straight to work, with minimal waste. Presumably, this conserves washer fluid for the category-five spray-hurricane that bathes the headlights via their own washer system, but this enables consistently good illumination, and is a-okay with me.

One note though – the wiper spray arms froze plugged solid twice on my watch, in extreme cold. Be sure to flush any trace water out of the system, very well, after, say, a car-wash, by spraying the fluid excessively afterwards. I’d also advise drivers use only a top-quality winter fluid, and be sure to triple check that the sprayers are working properly before setting off on a long trip.

Steering provides minimal actual feel of the road, though at speed it heavies up nicely. This means drivers need more deliberate inputs to change course, making the XC60 feel firmly attached to the requested line. Ride a single front wheel through a dirty-huge slush stripe, and she stays the course with near-nil steering-wheel tug-of-war. The steering also shines in low-speed driving, where it’s quick and (literally) feather light. Whether navigating busy city streets or a crowded mall parking lot, the XC60 is an absolute breeze to manoeuvre.

And, when you’ve finished at the mall, the motorized tailgate opens up on a cargo hold that’s wide and generous.

I noted few issues with entry and exit, and overall size and comfort. You’ve got room for four adults or an average-sized family of five, and adequate head and legroom for those of average size in each seat. In back, headroom disappears most quickly for larger occupants, and the rear seat floor has a substantial central hump, which reduces foot-room when three are riding in back. Up front, Donald Trump would approve of the big, tall console-wall separating the driver and front passenger.

First, the seats – weird, since usually Volvo seats are the comfiest seats to ever grace my backside. But here, boarding the tester requires drivers of my build and similar to do a thigh-pivot over a rigid bolster, which is considerably less comfortable than just sliding in. Sliding in isn’t an option anyhow, since the seats are made of grippy suede that grabs your clothes and shifts them around as you get seated. Once you are, you’ve got a wedgie, or at least, you’ll need a bit of a fishing trip in your clothing to get readjusted back to comfort. The seats attempt to make the XC60 R-Design feel sportier, but to me, they just make it less comfortable.

Ditto the ride: it’s on the sporty side, stiff, highly responsive, and very taut. Not a bad thing if you’re a sports car fan, though ride quality degraded rapidly on the poorly deteriorated roads in and around Sudbury. Hit the roughest pavement available on a test drive to confirm the R-Design’s ride quality for yourself. Some will find no issue, though your writer felt the XC60 is better taken as a luxurious cruiser with plenty of reserve firepower, not a hardcore rocket-ute. 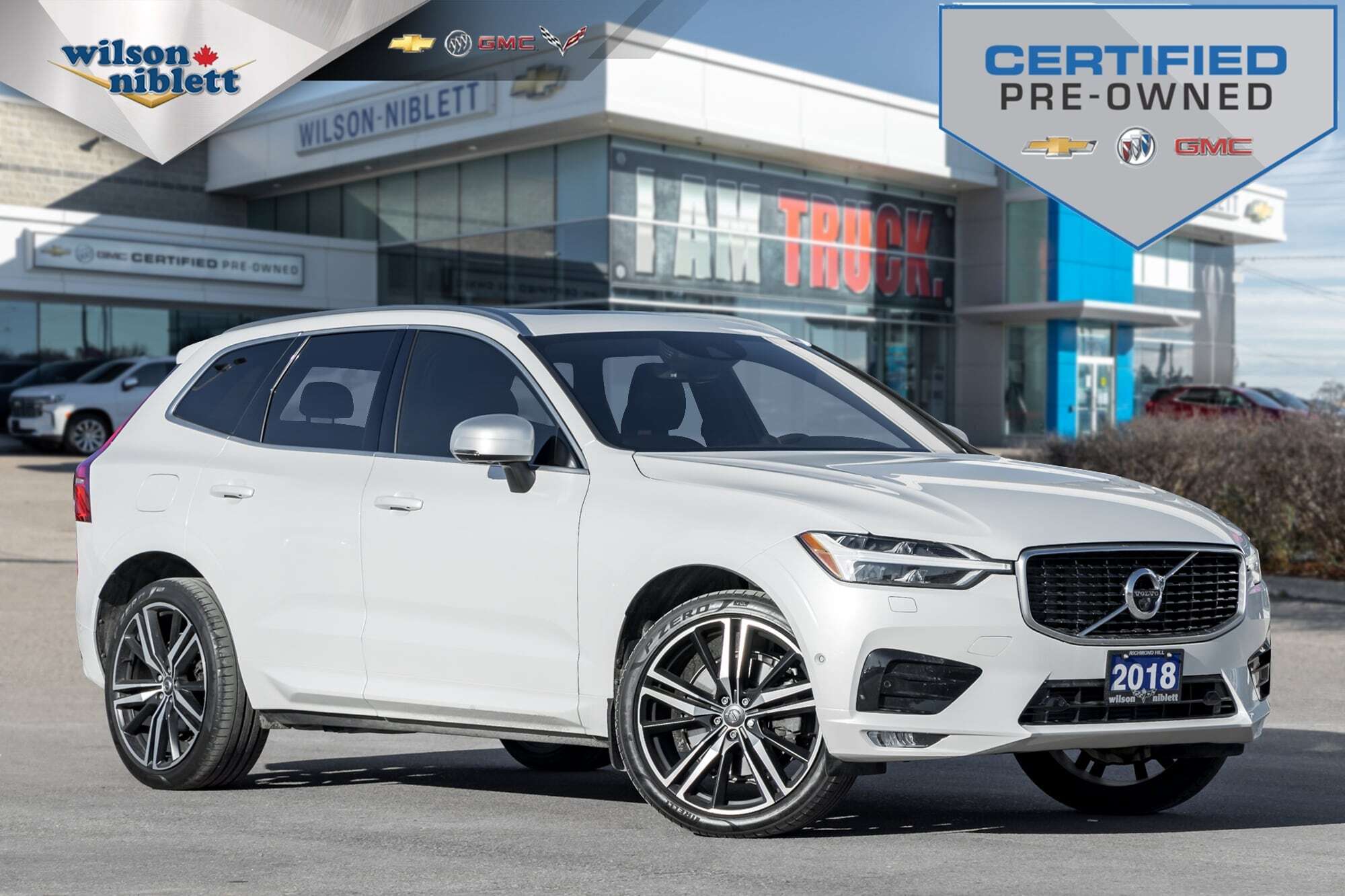 After all, to impress you the most, XC60 wants you to drive moderately through bad weather while you go full chill-zone, relaxing, enjoying the cabin, smiling smugly while all winter-driving hell breaks loose outside, and maybe, liquefying your eardrums with a little Clapton via the mega-watt Bowers and Wilkins stereo.

So, a unique and compelling take on a luxury crossover – especially relating to style, the driving environment, and some apparent fine-tuning to how the vehicle responds in challengingly slippery conditions. After confirming your acceptance of seat comfort and ride quality, the XC60 R-Design will leave you with one of the segment’s most unique offerings, most distinctive cabins, and most winter-ready driving experiences – all with firepower to spare.

About Justin Pritchard
Justin Pritchard is an automotive journalist, consultant, TV presenter, and photographer based in Sudbury, Ontario.
Follow me
You may also like
7.9