Much of the pre-launch reading material on the Cadillac ATS Sedan referenced a recurring theme: through development, each part, component and prototype was designed, built and brought to the ‘boss’ by the engineers for approval, but the boss kept sending them back with a simple demand.

That demand? “Make it lighter”.

The result, aimed at creating a sports sedan to give comparables from ze Germans a bit of a headache, was about the lightest, most nimble and purest driver’s cars in its segment. I remember driving that ATS Sedan on a handling course when it finally arrived, and grinning to myself.

A two-door ATS Coupe variant has just launched. Most of the body panels are unique, as are the wheels. The ride height is lowered and the track is widened, helping enhance an already fantastic driver’s car with added stability and plantedness.

Inside, the doors are reconfigured with shorter windows, and the ATS’s glossy, metal-trimmed take on blending high-tech with high luxury on board is alive and well. Outside, visual updates discreetly include a faster-looking rake to the windshield and a slightly shaved roof. It looks athletic, without screaming about it.

Up front, your correspondent found no major issue with room for my cranial bits, even with the lowered roofline, and I’m about 5’11” on a good day. Just don’t put anyone taller than about 5’8” in the back seat, or they’ll get all crabby-pants about the headroom. This part of the ATS Coupe is best left for smaller passengers.

Standard with a 2.0L turbo four-cylinder engine packing 272 horsepower and a just-launched torque boost to 295 lb-ft, ATS Coupe wears a $42,240 sticker with rear-wheel drive and a six-speed stick. This is a tantalizing setup, as it’s not prohibitively expensive, offers a robust and manly clutch and shifter setup that doesn’t feel like it’s made of boiled lettuce, and puts drivers at the helm of a proper and classy gentleman’s sports coupe.
All-wheel-drive (AWD) units (called ATS4) with the 2.0T engine sticker from $43,440 with an automatic included. A 321-hp V6 is on offer if you need more sauce (you don’t) though it comes automatic only, for $2,200. It’ll only hustle the ATS Coupe from 0-100 km/h a tenth of a second faster than the turbo-four.

That turbo-four is the engine to have. It’ll probably cost less to fuel and maintain in the long-haul, there’s virtually no performance penalty over the V6, (which is noisier), and most importantly, it’s a smaller and lighter engine, meaning less weight over the front axle, and even more immediacy and eagerness to the steering and turn-in and handling and other lightweight factors of friskiness. Drivers can expect to feel ATS4 Coupe 2.0T’s signature lightness in a few key ways. First, in their steering inputs, which come with little of the typical hesitation or resistance that tell you you’re  fighting the vehicle’s mass. Instead, ATS Coupe turns obediently, precisely, and with a delightful sense of eagerness-to-please typically found in little sports cars. Small steering inputs are all that’s required to send the ATS Coupe flitting around even the twistiest roads with mischievousness.

It’s not some light and flimsy-feeling steering either: the new-for-2015 premium steering rack by ZF loads up nicely, communicates the ATS’s weight well, and isolates the unpleasant sensations from the road’s surface beautifully. There’s a heavyset feel at the wheel, balanced nicely against the quick ratio, for a feeling of locked-on confidence. If memory serves me, it feels a touch more playful and eager than a comparable BMW 4 Series.

The ATS’s light weight is felt when ordering up some power from the engine room via your right foot, too. In stark contrast to the turbo engine’s ho-hum exhaust note and tastefully restrained growl, a split second of lag is followed by a slam into the seatback with enough potency to question how Caddy’s going to sell any of these with the V6. Since the output has less mass to move than most competitors, the 2.0T-powered ATS can feel curiously quicker than output numbers suggest. Torque is tremendous and pleasing, there’s always more available until the pedal hits the floor, and the engine never feels like it’s running out of breath.

It’s refined, too. Smooth, and brimming with torque.  And the tuner-kids say this engine is an exhaust, intercooler and computer chip away from a horsepower boost that’ll see it keep right up with a BMW M4, though modifying factory turbocharger system operation and engine fueling parameters is naughty and irresponsible and ill-advised ;-).

Light weight also means that under hard braking, ATS delivers urgent and alarming stops with power to spare, thanks to standard Brembo brakes up front. In its four-door configuration, the ATS is capable of stopping more quickly than a comparable 3 Series, and the coupe should perform similarly.

Attributes aside from the ATS’s lean build will help build appeal amongst driving enthusiasts, too. The Magnetic Ride Control system, through constant re-calibration of shock absorber properties, takes the usual compromise between sportiness and ride quality and fist-punches it in the man-bits.

By continuously altering damping based on the selected drive mode and the surface underfoot, Magnetic Ride Control supports a high-agility experience without generating ride quality like a Superstore shopping cart in a gravel parking lot, and enables a comfortable ride without handling like a bungalow full of cottage cheese. The gist? Drivers can expect consistently pleasing ride quality on most every type of unfavorable surface, with no corresponding sacrifice to responsiveness.

Let’s add this all up: with the sharp new ZF steering rack, magnetic real-time optimization of dampers and body movements, and the light and eager and frisky feel throughout, ATS4 Coupe handle corners the same way James Bond handles devious sirens: in a classy suit, and with a ravishing and merciless grip. On the slippery stuff, the calibration and networking of the tester’s AWD system and stability control impresses. On a filming session one afternoon, your writer coaxed the ATS Coupe to do something dramatic for the camera with little luck. Heavier-than-advisable throttle inputs while cornering on a back-road lined with ice stripes saw the rear of the car obediently and truly follow the front, with minimal fuss and squirming from the AWD system beneath, and virtually no sense of fighting a numbed throttle pedal, or frustrating application of the brakes while the throttle was pressed. Driven even more gently, it’s an even more surefooted confidence.

Notably, the AWD and stability control systems work with fantastic synergy, with neither ever felt as more than a little squirm or squiggle from under the car, even on challenging surfaces. It all feels calibrated to work with, not against, drivers.

Braking is much the same: even on split-traction areas, or diagonally across alternating stripes of pavement and ice, ATS stays straight, true and stable, rather than pitching and squirming and twisting in the direction with the most traction. The action of the ABS system is relatively quiet, smooth, consistent and drama-free, too.

So, expect to feel well supported when driving, even a little sportingly, on slippery roads. And if the priority is being very careful and very cautious with available traction, drivers will experience the AWD and stability control systems doing their thing with confidence-inspiring effectiveness. Note that the tester wore a set of Hancook iPike winter tires.

Even stopped on a steep hill covered mostly in patches of ice, the ATS4 Coupe did the unusual: after a moment of wheelspin and slipping backwards and sideways, a front tire found a touch of traction, used it, and got up and over. Almost nothing I ever drive up my traction-test hill ever pulls that off. Check it out in the video: the AWD system knows what it’s doing – and though it can feel a little abrupt when pushed to work hard in (highly unscientific) tests like the above, its effectiveness makes it totally forgivable.

Highway cruising in the snow? Though the ATS feels light as a whole, the heavyset steering makes it easy to dial in gentle inputs and lock the car into its lane when surefootedness is the priority. The stability control system turns its sensitivity up accordingly at speed, and powerful xenon lights and remote start help further winter driving comfort and confidence here, too. 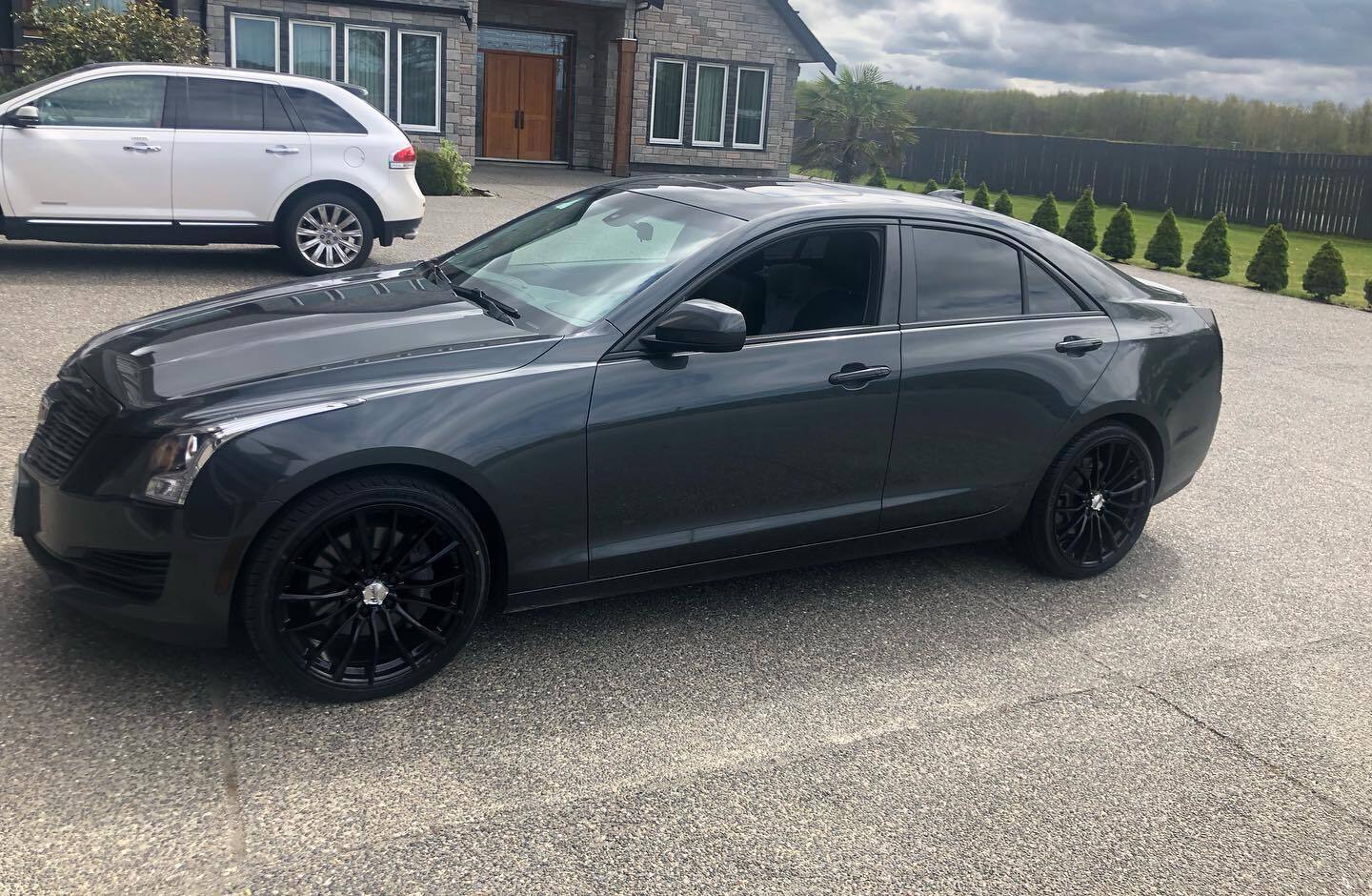 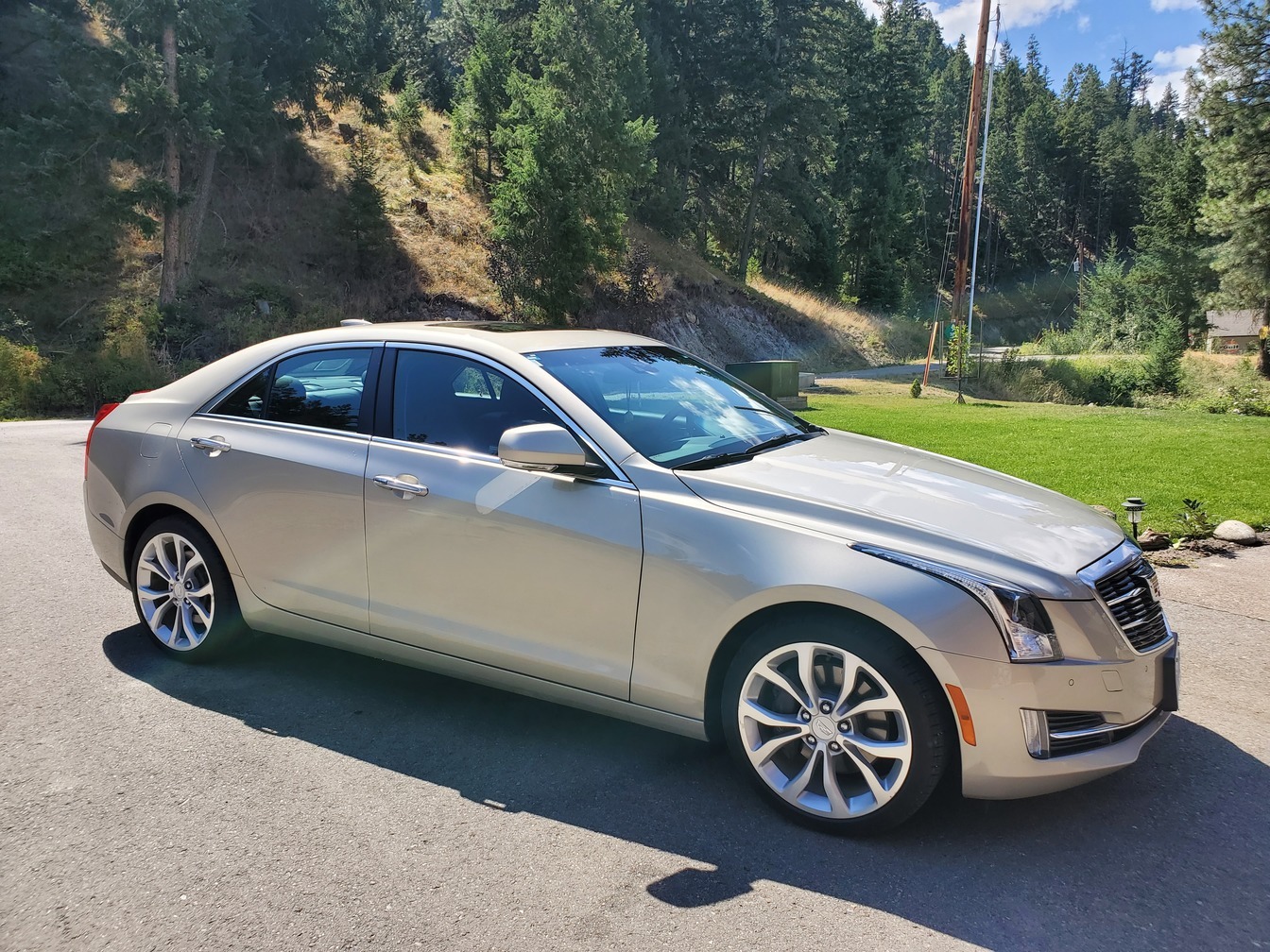 Finally, if you’re planning to visit the Costco parking lot on a winter evening after the lights go out for some investigation of the ATS’s ability to handle low-traction conditions of the lateral and radial variety, just hold the ‘ESC OFF’ button about 10 seconds to kill the nannies, and enjoy the whackload of power the AWD system sends to the rear wheels.

Complaints? The paddle shifters don’t quite respond fast enough to make them entertaining enough to use regularly, the instrument cluster looks oddly old school and low budget compared to the rest of the ultra-modern cabin, and the ridiculously sensitive occupant sensor in the front passenger seat sounds the ‘BUCKLE UP’ alarm if you put anything, even your cell phone, on the seat without doing up the belt.

Those cross-shopping this machine’s direct competitors can check out the BMW 4 Series, Audi A5, Mercedes C-Class Coupe and others, with the ATS boasting what’s arguably the most compelling blend of starting price and starting horsepower output in the field.

If your priorities in a well-priced driver’s luxury coupe include an absolutely bang-on blend of ride quality and handling, as well as winter driving confidence enhanced by highly effective traction and support systems, the ATS4 Coupe 2.0T should hit the mark.

About Justin Pritchard
Justin Pritchard is an automotive journalist, consultant, TV presenter, and photographer based in Sudbury, Ontario.
Follow me
You may also like
8.0
AdChoices
Latest Articles