It’s easy to call Toyota a champion of hybrid vehicles, the brand having sold more than 15 million hybrids worldwide, including 200,000 right here in Canada.

However, Honda’s important role in introducing the world to hybrid vehicles is often overlooked. After all, the Honda Insight came to market just before the Toyota Prius some 20 years ago, ushering in the era of gas–electric automobiles. While the Prius ultimately stole the spotlight, Honda has been steadily improving its hybrid technology over the years, with both conventional and plug-in offerings.

With lots of hybrid models between them, it’s the classic battle of the Accord versus Camry where they most closely align, and these hybrid versions add a little electricity to the competition.

The 2020 Toyota Camry Hybrid is easily the more visually striking vehicle, with aggressive lines and body angles. It’s a far cry from the bland styling that used to define Toyota’s midsize sedan. The grille is a bit overbearing, especially in this XLE trim, with plenty of horizontal slats making up the lower part of the front end. It looks like Toyota’s designers took inspiration from one of Gillette’s razors when this fascia was penned. However, the Camry has a slim profile overall, looking sportier and more exciting than what’s typical of something wearing a Camry badge.

The same can’t quite be said about the 2020 Honda Accord Hybrid, which looks large and stately. While the Accord features a sportback-like design, it appears a bit wider and taller than the Camry thanks to its larger and more upright windows. I’m not a huge fan of the chrome brow on the front end, which seems a bit excessive.

Excessive is one way to describe the Accord’s cabin, which is littered with buttons. The many controls take getting used to, but the cabin is well designed otherwise, with lots of space, and a limited application of cheap-feeling materials. Adding to the Accord’s interior is the high-tech look and feel through the use of modern, bright, and high-resolution displays in the gauge cluster and infotainment system.

The Camry seems dated by contrast, especially when you look in the gauge cluster and at the infotainment system. However, the overall cabin design is pared down and simple to use. Fingerprints will be highlighted on the black panels around the infotainment system, and while the area ahead of the front seat passenger features a wood-like finish, other parts of the cockpit have hard plastic coatings. Simply put, the Camry’s interior could be better.

Both cars get the right message across when it comes to safety. While the Accord – hybrid or otherwise – has been rated by the Insurance Institute for Highway Safety (IIHS) as a Top Safety Pick, the Camry takes its highest Top Safety Pick+ rating. That means both sedans met the tough standards set out by the Institute, with only the Accord’s headlights falling short of the top rating.

In terms of equipment, the Camry Hybrid features automatic high-beam headlights, a forward-collision warning system with pedestrian detection, lane-keep assist, and full-speed adaptive cruise control. Blind-spot monitoring, rear cross-traffic alert, reverse automatic braking, and an enhanced surround-view camera system are all optional extras, and Toyota offers a head-up display (HUD) as well, although it provides a limited amount of information and has the same bland aesthetic as the rest of the displays in the car.

The Accord also packs automatic high-beams, forward collision warning, lane-keeping assistance, and adaptive cruise control. Depending on trim, the vehicle employs either camera- or sensor-based blind-spot monitoring, and Honda also offers a HUD with a bit more information than the Camry’s.

Both of these cars offer a ton of features, and it’s unlikely you’ll feel like anything’s been left out – especially in their priciest trims. Making the choice as easy as possible, there are only a few trim levels to choose from with each car.

The top XLE model gets a full leather interior, all the advanced safety gear, integrated navigation, ventilated front seats, a HUD, a larger gauge cluster display, and upgraded headlights. The only features buyers may want and can’t get are heated rear seats and a heated steering wheel, which are notable exceptions since they can make fluctuating temperatures much more bearable for drivers and passengers alike.

The Accord Hybrid comes in two trims: base and Touring. The entry-level version gets dual-zone automatic climate control, Android Auto and Apple CarPlay support, LED headlights, heated front seats, push-button start, and remote start. The Touring model gets all the same goodies as the Camry XLE, but also throws in a heated steering wheel and heated rear seats, giving it the slight edge in this category.

However, as I touched on earlier, the Accord interior is loaded with buttons. They take a bit of time to get used to, though the infotainment system and other displays in the cabin are easy to use and full of handy information. The eco-driving guides and coaches in the Accord are also far easier to understand, whereas in the Camry, it’s just a conventional gauge with a needle that sweeps between three zones depending on how much throttle is applied.

The Camry feels a bit simple, with easy-to-find buttons around the cabin. However, simplicity means you’re not being fed the best information, and it seems limited. The infotainment interface also seems dated, with a drab colour palette. In terms of visibility, it’s a bit easier to see what’s happening outside the Accord, making it easier to place when parking or changing lanes.

Pop the trunk on the Camry Hybrid, and you’ll be met with 428 L of storage space. The rear seats fold down, though they don’t fold flat and the opening between the cargo and passenger areas is fairly narrow, limiting the functionality overall. The Accord Hybrid has a tiny bit more storage space, with 473 L, although it also has folding rear seats.

In general, the Accord has a bit more space for passengers in the front and rear, except for the headroom in the back, where the Camry comes out on top. Honda was very generous with its rear-seat legroom, with 100 mm more space than the Toyota offering.

Lacking the same airy feel as the Accord, the Camry’s cabin comes across as slightly less spacious. Toyota gains a few points on the road, however, with a quieter cabin. While the ride is stiffer than the Accord, the Camry manages its vertical motion much better than its rival, which can feel a bit too floaty as it crests humps or hills.

The Accord’s cabin is a more comfortable place to sit, with more space to relax. There are a few occasions where Accord can feel a bit uneasy on the road, though, with more body movement in corners and over undulating pavement.

Under the hood of the Toyota Camry Hybrid is a 2.5L four-cylinder engine with a pair of electric motors – one to help move the car, the other to help with charging. A lithium-ion battery provides the energy for those electric motors in most models, while the top XLE trim gets a nickel–metal-hydride unit. Managing output to the wheels, meanwhile, is an electronically controlled continuously variable transmission (CVT). With the combined gas–electric powertrain putting out 208 hp, some might expect a similar feeling to the non-hybrid four-cylinder Camry. Fortunately, the first prod of the throttle will lead to a surprising bit of thrust as the electric motor fills in any gaps in the gas engine’s performance.

On the other hand, the pairing just doesn’t feel especially powerful. Although it’s smooth, I found the gas motor in the Camry firing up far more often than the one in the Accord. If Toyota benchmarked the performance of its own non-hybrid Camry then this feels like a slight step up from that setup, but it’s less exciting than its rival from Honda.

When it comes to delivering a more engaging and responsive vehicle, Toyota has taken some great strides with its latest Camry, and that also applies to the hybrid model. It changes direction quickly and can feel sporty when pushed – not exactly common Camry traits. The sport mode helps here, with the default setup slightly less generous in providing that engaged feeling.

The Accord feels lively in comparison. The smaller and lighter steering provides less feel but does give it the sensation that this car can move quickly on the regular. The powertrain is also more accepting of aggressive inputs and can keep up with demands to pick up the pace.

According to Natural Resources Canada (NRCan), the two cars fare similarly on paper. The Toyota Camry Hybrid returns 5.3 L/100 km in city conditions, 5.0 on the highway, and 5.1 combined. The Accord Hybrid is rated a steady 5.0 L/100 km in all conditions.

In practice, we found it really easy for the Camry to meet its standards, achieving 5.1 L/100 km during testing. On the other hand, the Accord went well beyond our expectations, returning figures as low as 4.0 L/100 km. If fuel economy is an important aspect of your buying decision, the Accord will make the choice easy.

But fuel economy isn’t the end of the conversation, because value and pricing are also worth noting. Toyota will hand you the keys to a Camry Hybrid LE for just $31,550, which doesn’t include the $1,770 freight and delivery fee. There’s an extra cost red paint finish for $255, but otherwise, this is excellent pricing for a hybrid sedan. The Hybrid SE model costs $34,600, while the Hybrid XLE model is $41,350, both excluding the $1,770 freight charge.

The Honda Accord Hybrid starts a tiny bit more than the Camry Hybrid SE, with a price tag of $34,705, with an additional $1,670 for freight and delivery. The Accord Hybrid Touring model bumps up to $41,405, excluding that freight charge. The Accord is slightly more expensive and offers fewer paint choices for buyers. But it also provides a few more features at that fully loaded end of things.

While Toyota has many hybrid options available in its showroom, it may not always be the best choice for their segment. This comparison emphasizes that point. The Camry Hybrid falls just short of its Accord competitor.

If you want to get into a hybrid sedan while spending as little as possible, the Camry Hybrid will fit that bill. Otherwise, we’d recommend the Accord Hybrid, which feels more refined, offers more space and features while also delivering far better fuel economy.

Honda Accord Hybrid available on autoTRADER.ca 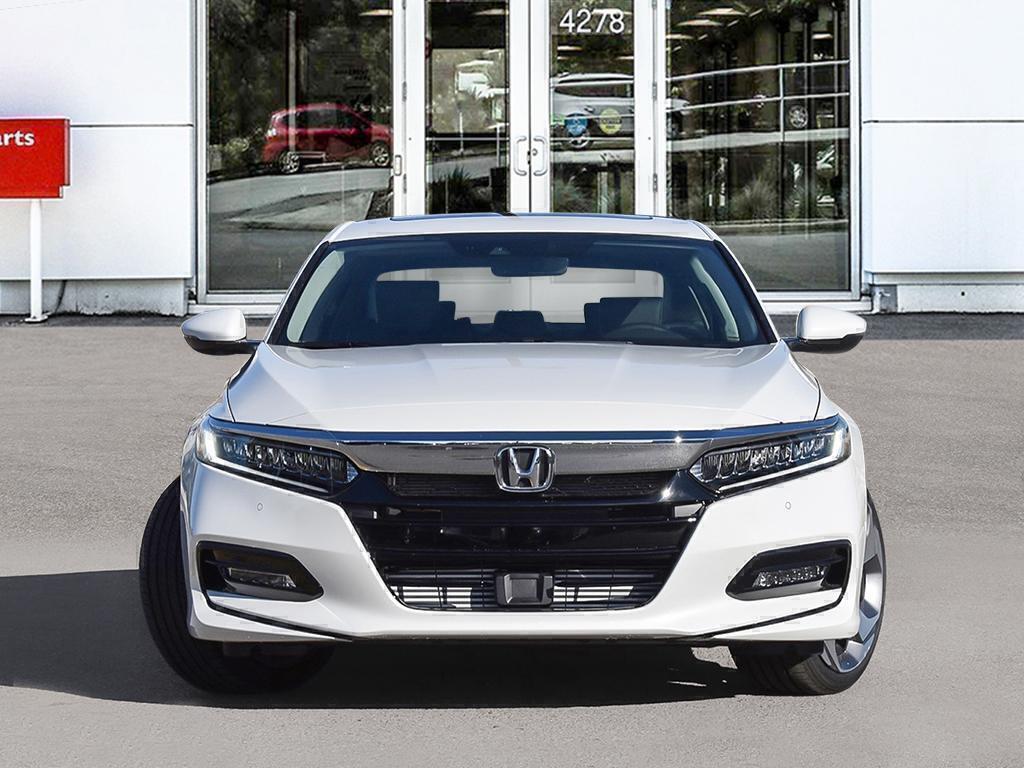