Take a close look at the 2020 Cadillac CT5-V and you’ll see a whole slew of confusing qualities.

It has the price point of a sports sedan, but the wheelbase of an executive-size luxury car. The name brings expectations of past fire-breathing speed machines with V badges, but this one isn’t on the same tier of performance. However, if you take away these expectations there’s a solid car hiding underneath.

Lurking in the engine bay is a 3.0L twin-turbocharged V6 engine making 360 hp and 405 lb-ft of torque. Peak power comes on nicely just past the midway point in the rev range, about 5,600 rpm, while top torque is available from 2,400 to 4,4000 rpm. Those power and torque bands are handled exceptionally well by the ten-speed automatic transmission, which seems to have a gear that puts the engine in its sweet spot for every occasion. Tackle a metered on-ramp and the CT5-V will hit highway speeds in just about 4.5 seconds. Rear-wheel drive is standard, while all-wheel drive is available.

My biggest complaint with the motor is the noise. While cruising on the highway or around town, the exhaust drones a bit and is unbecoming of a luxury or performance car. Once you drive the vehicle aggressively, however, the noise becomes a bit more of a highlight. The exhaust burps on upshifts, the rev-matching on downshifts sounds intense, and the Cadillac begins to live up to its V-Series name. While it isn’t as burly or impressive in how it pushes your back in your seats as V cars of old, there is still a tingle of excitement that comes with these little details.

However, vehicles with performance-minded badges get away with poor fuel consumption and practicality, so long as they deliver the goods on the road. Of course, by “the goods” I mean an entertaining driving experience. Unexpectedly, the CT5-V comes through here. It comes as a surprise since the Cadillac is longer and less powerful than both of those BMWs, but a few very smart tweaks to the CT5 make it feel solid and refined.

For starters, the longer wheelbase means that the vehicle rides very comfortably, but Cadillac made the wise decision of giving the CT5-V its magnetorheological dampers, which firms things up to allow the car to feel more engaging without being too stiff and brutal. As a result, the car shows its strengths in a variety of scenarios, from lazy highway cruises to corner combinations in the countryside.

The CT5-V platform goes hand-in-hand with well-handling vehicles, as evidenced by previous Cadillac performance cars, as well as the Chevrolet Camaro, and this car feels well balanced as well.

It’s important to note that the powertrain and chassis work together to make you feel good about the drive. Past V-Series cars, while exhilarating, required a lot of mental focus to get right, as having that much power (the old ATS-V had 420 hp, while the CTS-V had 640 hp) could overwhelm the driver and tarnish the experience. This car isn’t as fast as the old guard was, but it is a more complete experience and one that almost anyone can enjoy.

While it’s unlikely a CT5-V owner will visit the track regularly, the vehicle does have a significant amount of traction and stability control settings. There are a few drive modes including a track mode, and a V shortcut on the steering wheel to quickly access your favourite setup.

As convincing as the driving experience is, I’m less sold on the Cadillac’s design. It looks better in person than it does in photos, as the lines in the sheet metal provide a chiselled shape. It’s clear that Cadillac is avoiding over-blinging its latest cars, and there isn’t much blinding chrome to be found. An interesting aspect of the design is the sportback-profile, which helps to express the accommodating rear seats. However, the byproduct of that decision is a strange plastic triangular piece by the C-pillar.

Inside, the CT5-V showcases more of the same old Cadillac. While not an entirely drab black cabin, the test model featured orange stitching and some carbon fibre themed accents to show an understanding of attention to detail. I’m critical of the button placement, and some switchgear used in the HVAC controls feels a bit too cheap for a premium car, but overall the cabin isn’t too offensive.

Interacting with the CT5-V’s various systems can feel a bit clumsy – I’d recommend buyers use Android Auto or Apple CarPlay if they’re more comfortable with those interfaces rather than the Cadillac infotainment system.

Cadillac has made some smart, thoughtful touches to its cabin, like the wireless phone charger and an additional slot to place your phone by the armrest. The redundant hardware controls for the infotainment system – a knob on the dash and a rotary controller by the gear stick – are ergonomically sound, though some controls are hidden in awkward spots – like the drive mode switch, which is just ahead of the gear selector, almost underneath the centre console.

Being coddled and having the latest features is one of the highlights of owning a new luxury car, and Cadillac delivers on that front. In addition to performance-oriented features, this model features heated and vented seats in the front, as well as a heated steering wheel. Naturally, there’s dual-zone automatic climate control, but the HVAC system has an air ionizer as well.

There are a ton of sensors and cameras to help drivers place the car while parking. A surround-view camera array helps avoid costly mistakes. There’s also a parking assist feature that will search for a spot and automatically steer the vehicle into it.

To address the slightly small rear window, the CT5-V offers an always-on rearview camera that’s displayed in the rearview mirror. The angles are slightly wider and everything seems a bit closer than you’re used to, but it’s a nice addition to improve visibility. My favourite feature is the colour head-up display, which helps to keep your eyes on the road. Cadillac also offers a nice dual-pane sunroof to bring some natural light into the cabin.

While the CT5-V has yet to be rated by the Insurance Institute for Highway Safety (IIHS), it’s important to point out the numerous safety features it offers beyond those parking assistance systems. There’s a rear cross-traffic alert system, a forward collision alert, pedestrian detection with automatic braking, lane-change warning, and blind-spot monitoring as standard equipment. Additionally, you can get rear pedestrian alert and lane-keeping assistance. Cadillac is promising a next-generation adaptive cruise control system in 2021 models, which is a feature that’s worth waiting for.

Thanks to its adaptive suspension, the vehicle is pretty comfortable on the road, but there are a few other comfort-oriented highlights in the CT5-V to point out. The front seats are pretty accommodating with plenty of adjustment. They’re also heated and cooled, though rear seats are left out of the fun. It seems like the rear-seat passengers aren’t given the same standard of care as the front seats. While the vehicle has a generous amount of legroom in the back, the headroom seems pretty limited.

To be blunt, if you’re buying a performance sedan and looking for practicality, you won’t be that satisfied with the CT5-V. There is just 337 L of storage to work with, and space feels a bit compromised thanks to massive gooseneck hinges. The rear seats fold with a 60/40 split, but the opening between the truck and the cabin is pretty narrow.

If it sounds like there are some weak points in the overall package of the CT5-V the pricing helps redeem many of those complaints. The CT5-V starts at $49,798 before the $2,100 destination charge and taxes are added. That price is for a rear-wheel-drive model, with all-wheel traction adding $2,200 to the price.

My well-equipped example featured a price of $64,483 before destination and air conditioning tax. That’s a pretty good deal, as the CT5-V offers the best of two worlds: it’s as sporty and fun as a true sports sedan, but also spacious and comfy like an executive sedan. The pricing is very competitive.

Reject the expectations and the Cadillac CT5-V is a solid car. It may not be as blazing fast or awesome as its predecessors, but the lack of raw power still leaves a sporty and enjoyable sedan. With solid driving dynamics, good attention to detail, and an attractive price tag, the CT5-V is certainly worth the attention of sport sedan shoppers. 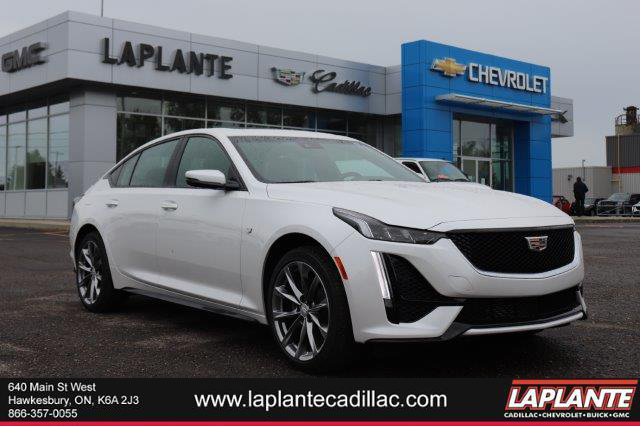