PORTO, Portugal – Jaguar design chief Julian Thomson says, “All Jaguars should look as if they’ve been designed by one bloke. Like someone quickly sketched it on a napkin. Spontaneous, pure, and flowing.”

Having worked alongside former head designer Ian Callum when the F-Type was first penned nearly a decade ago, Thomson certainly knows the virtue of that mandate, as the 2013 F-Type – carrying the not-insubstantial burden of being the spiritual successor to the legendary E-Type – came up aces. For 2021, the F-Type gets a mid-cycle refresh, and lo and behold, the designers at Jaguar’s new facility in Gaydon in have managed to make this sexy two-door sports car even sexier.

Key to this successful facelift is the latest LED technology that allows for the Jag’s new super-slim headlights. The F-Type also gets a new hood, larger grille, and recontoured front fascia, all conspiring to give it a sleeker, more tapered snout. Out back we see a new bumper and slightly tweaked taillights. Two new colours – Bluefire and Firenzi Red add some zing.

The Jag’s basic interior architecture remains, but gets updated with JLRs latest Touch Pro infotainment system that now supports Apple CarPlay, Android Auto, and has an embedded Spotify app. There’s also a new 12.3-inch configurable gauge cluster replacing the old analogue unit. Standard configuration sees the speedo on the left and tach on the right, with the central part of screen displaying driver’s info or navigation. Select Dynamic mode it gets all racy with a big central tachometer sporting a digital speed readout within.

The F-Type’s cabin still looks good, retaining that bit of theatre offered up by the big dash-top vent that rises on start-up. Being of this vintage it doesn’t suffer from touchscreen madness – we still see a trio of large HVAC dials, a volume control, and a plethora of buttons. Yay. To the left of the electronic shift wand is a toggle for selecting drive modes.

The driving position is pure sports car. Once ensconced in the low-slung sports seats it’s an intimate environment – that big central console takes up a lot of real estate and you peer through a small windshield over that long, shapely bonnet.

Jaguar has simplified the F-Type’s stable for 2021 – down from sixteen variants to six. A casualty of this is the six-speed manual transmission which suffered a miniscule take rate. This might have been more of a travesty to true sportscar traditionalists had this gearbox been a sweetheart, but in truth it was a rather unsatisfying, ropey affair. So the excellent and omnipresent eight-speed ZF automatic is the sole transmission available. And controlling it is a more pleasant affair as all F-Type models now get real metal shift paddles, finally putting to rest those flimsy plastic deals.

For the international media launch of the 2021 F-Type, Jaguar chose a spectacular two-day route that took the assembled journalists from Porto, Portugal, to Lisbon via an inland route that traced the winding slopes of the Douro Valley. Yes, the scenery was spectacular, but more importantly, these smooth, flowing, and lightly travelled routes are some of the best driving roads in the world (N222 – Google it). The perfect environment to assess the fruits of Jaguar chassis guru Mike Cross and his team’s labours. There’s a lot going on beneath this F’s refreshed visage – the electric power steering system has been completely recalibrated from scratch, and the chassis sees new springs, dampers, and anti-roll bars along with more aluminum suspension bits.

All evident from behind the wheel of my first vehicle on this journey, the rear-drive P300 Convertible with its 296 horsepower, 295 lb-ft 2.0L turbo Ingenium engine. This is the first time I’ve driven a four-cylinder F-Type, and dang if it isn’t the best-handling one I’ve piloted. Mention this to the Jag engineer on hand and he just grins and nods. Yeah, it’s a sweetheart. There’s a delicacy to the P300 – rear-drive, lighter front end, and exceptionally good electric steering give it real sportscar poise. Fine ride quality too. Yes, the 2.0L Ingenium turbo four isn’t terribly inspiring, but as far as engines of this type go – and they are everywhere – it is a good one. Minimal lag, strong and linear power delivery, and a decent soundtrack thanks to its selectable active sports exhaust. No lack of pace either. The P300 always feels eager and on point.

From frisky to felonious

Jump from the P300 Convertible into the yellow F-Type R Coupe ($119,000), and the experience goes from frisky and friendly to fast and fiendish. A 575-horsepower, 516 lb-ft 5.0L supercharged V8 harnessed by rear-biased all-wheel-drive will do that. This is the same engine found in last year’s F-Type SVR, and it now gets hooked to an upgraded version of the ZF eight-speed auto dubbed QuickShift – lessons learned from the limited edition 600 hp Project 8 sedan. In Dynamic mode this auto slams home upshifts with kidney-punch authority.

You feel the extra weight (200 kg) over the P300 and while the steering is improved over the outgoing model, it doesn’t display the purity of the rear-drive four-cylinder car. It’s a more serious proposition – a ballistic GT to a balletic sportscar.

The F-Type R gets 12-way performance seats trimmed in leather and “suedecloth”, and the console sees lashings of carbon fibre.

This supercharged V8 is a wondrous thing, showing immediate throttle response and a heroic enthusiasm for revs. The thrust is addictive, as is the sound of this epic bent-eight, although those who have driven previous versions might notice something missing from its repertoire. Yes, the 5.0 still rumbles, barks, woofs, and howls; but those gloriously juvenile backfires on lift-off have been nixed. I’ve often wondered how those rifle-shots were even legal (my long-suffering wife refused to get back in the last F-Type R I brought home after a too many artillery volleys echoed through our ’hood). New for 2021 is a selectable quiet start-up mode, which will be good news for many a neighbour.

Standard kit for the R includes adaptive damping, 20-inch wheels wearing Pirelli P-Zeros (265/35ZR20 front, 305/30ZR20 rear), electronic limited-slip rear differential, and reprogrammed DSC (dynamic stability control). This keeps things in control, yet driving the R on these damp roads in Portugal requires attention and respect. It’s a very fast GT that, like all the V8-powered F-Types before, possesses a slightly unhinged side to its personality that makes this car so enticing. Part muscle car, part sophisticate, this Brit beauty is all bewitching.

There were no V6 examples on this launch, probably because the supercharged V6 P380 will not be sold in Europe. That market gets a rear-drive V8 version detuned to 444 horsepower that doesn’t make it to our side of the pond. I asked the Jag team if there is an F-Type SVR on the way. “No comment” is pretty close to a “yes” in my books. The next SVR will likely sport the high-revving 600-hp version of this 5.0L supercharged V8 that currently sits under the Jaguar Project 8’s bonnet.

If you’ve always loved the way the Jaguar F-Type looks (how could you not?) this 2021 refresh is a home run – successfully improving the countenance of arguably one of the prettiest cars to hit our roads in decades. And that is no small feat. 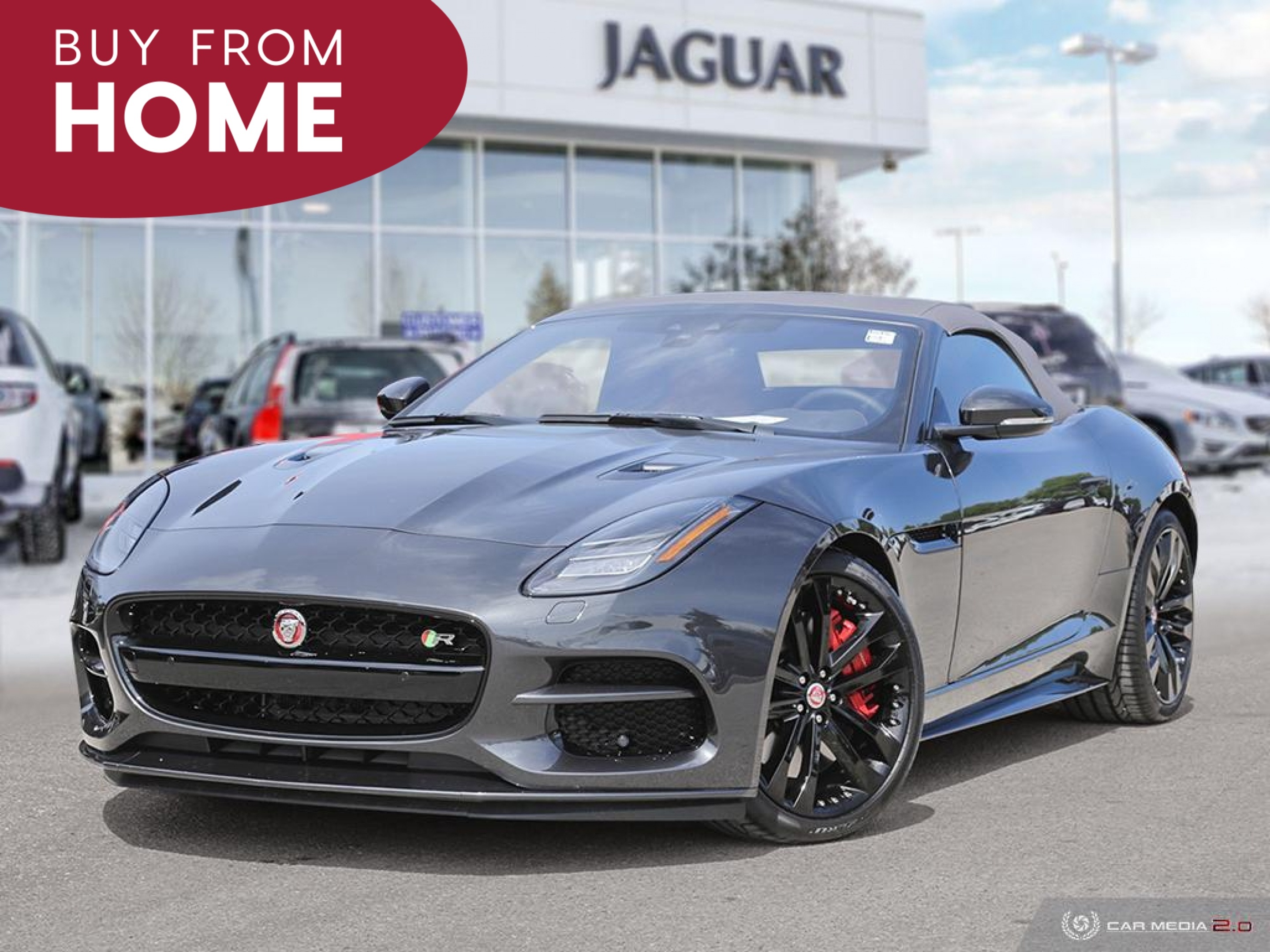