Subaru fans and loyalists are eagerly awaiting the new 2020 Subaru Legacy, because for every new advancement that comes to the brand’s sedan, the same updates (or more) come to the flagship Outback crossover as well. Indeed, the sedan is regularly in the shadow of its Outback counterpart, but for shoppers who don’t want a big wagon-like adventure-mobile, the new Legacy will certainly provide an attractive bargain compared to its rivals from Toyota, Honda, and Nissan.

The Legacy’s story starts under the hood, as it boasts a new platform and modernized power plants, but the new sedan also benefits from Subaru’s priority on safety, with innovations to keep it and others on the road injury-free.

Notably, the Legacy has transitioned to the same Subaru Global Platform that underpins the Forester, Ascent, Crosstrek, and Impreza. The platform has been valued for its rigidness in the past and that trait is found in the new vehicle as well, as this is one of the more enjoyable Subarus to drive in recent memory.

Throughout our first drive of the vehicle, the ride was very smooth and neutral-feeling, meaning it never felt nose- or tail-happy, and it was easy to pilot through various corners. Unlike the SUVs employing this platform, the Legacy has much less body roll, making it feel more natural and composed when driven aggressively. Despite it using similar underpinnings as the other cars in its lineup, Subaru is happy to illustrate just how much the platform has changed in the past few years. They say that when the platform first went into use in the compact Impreza, they used about 7 metres of structural adhesive, while the new Legacy features 33 metres. It’s a larger car, but it reveals just how Subaru is sweating the details with its latest sedan.

The platform is also expected to help Subaru deliver exceptional results in crash tests. The Insurance Institute of Highway Safety has previously granted Top Safety Pick Plus ratings to the Crosstrek, Forester, Ascent, and Impreza; and the Legacy has many of the same characteristics that will help it excel in the Institute’s crash tests. It has better energy absorption than the outgoing model and packs lots of standard active and passive safety features that are designed to prevent accidents. The automaker built the car for the future, including acing NHTSA’s devastating new frontal oblique crash test

Subaru’s EyeSight suite of safety technology is standard, meaning you get adaptive cruise control, automatic emergency braking, lane-keeping assistance, and a vehicle distance warning. The automaker added a few more features that are designed to keep the Legacy centred in its lane, and also follow the path of the vehicle ahead (if there are no clear lane markings.) In addition to EyeSight, the Legacy can also get blind-spot monitoring, and rear automatic braking.

The safety systems don’t stop there though. Like the new Forester, the Legacy also offers a driver monitoring system to remind you to keep your eyes on the road. There are some convenience benefits to the facial recognition technology, as it can store your seat and mirror memory, as well as HVAC settings and radio presets, so you don’t have to mess with a bunch of memory buttons.

Launching with the Legacy is Subaru’s StarLink Connected Services. Its best described as OnStar for Subaru, but Subaru provides a three-year free trial, and there are no packages or subscription tiers. You get everything with your subscription, including remote services like vehicle location and remote unlock/lock from an app, but also emergency services for when you need help while on the road. There are also curfew and boundary alerts, useful for owners with teen drivers.

Changes to the Engines and Fuel Economy

It’s clear that Subaru is offering much more than just a car with standard AWD in this segment, and things continue to improve under the hood. Base models are equipped with a 2.5-litre flat-four engine with direct injection. It makes 182 hp and 174 lb-ft of torque. While it has the same displacement as the outgoing engine, it’s designed with 90 percent new parts. It’s paired to a CVT which is also spruced up with 80 percent new parts. This powertrain is smoother than the outgoing one, and the transmission’s improvements mean that it doesn’t sap all the fun out of the motor in the process of sending that power to all four wheels. This powertrain combination is expected to return 9 litres per 100 km in the city and 6.7 litres per 100 km on the highway, matching some of its front-wheel-drive competition. In action, the engine is adequate and will suit the needs of most buyers.

But more interestingly, Subaru is offering an optional turbocharged engine in its GT branded vehicles. Similar to the unit found in the three-row Ascent SUV, this 2.4-litre motor makes 260 horsepower and 277 lb-ft of torque, although it’s tuned differently in this mid-sized sedan. The Ascent is a bigger vehicle, and expected to tow, where the Legacy is smaller and likely won’t tow, so it feels a bit more lively with lots of grunt off the line.

The power figures eclipse those of the old six-cylinder model, and Subaru pointed out that the motor runs on regular gas. Unfortunately, you can’t escape the CVT, as this motor gets paired to a variable ratio transmission. This saps a bit of the fun out of the experience, but it returns solid fuel consumption numbers of 10.2 litres per 100 km in the city and 7.5 L/100 km on the highway. It takes just over six seconds to hit highway speeds from a standstill, which means the car feels plenty quick in comparison to its rivals.

While a smooth operator, the motor can sometimes feel at odds with its transmission, which isn’t as eager to shift the motor into action. Sometimes after putting my foot down, there was a bit of inactivity before the transmission decided to serve up what was requested. Other times, the power surged and receded, as the car didn’t want to stay steady. I’d chalk these complaints up to early production issues; these will likely be ironed out by the time the Legacy starts hitting showrooms.

The Nissan Altima, one of the Legacy’s close competitors, have been updated with AWD, but it doesn’t have an optional high-horsepower engine. Subaru is meeting that demand here and doing it with pretty good fuel economy as well.

A new platform and powertrain bring the Legacy up to the standards of 2020, but its redesigned interior helps it gain attention. This should come as no surprise seeing how the Forester and Ascent both boasted new-look interiors that give off a premium vibe. The Legacy continues the new interior design language, with a flat yet attractive look on the dash, and higher trim level models have lots of soft-touch materials and tasteful accents like stitching in the seats that match the leather hues.

More impressive is the large 11.6-inch vertical touchscreen infotainment system. While it is easy to use with large buttons, it can be a bit slow to switch between screens and apps. The system has support for Android Auto and Apple CarPlay and even splits the large screen in half to show you those systems in addition to Subaru’s StarLink information. It’s helpful, as are the four available USB ports for charging your devices. Subaru also says that an optional dealer-installed wireless charging pad will be available as well. Base models swap the big display for two smaller seven-inch units, but this setup also gets Android Auto and Apple CarPlay.

I’ll admit that there’s a limited amount of storage space in the front seats, but the rear seats are extremely accommodating. It’s among the most spacious back seats in the segment, and may even be a class above. The trunk doesn’t sound particularly spacious even with an extra three litres of volume, but Subaru has made the cargo space more practical, with a wide opening that will swallow up four suitcases. Need more space? The rear seats fold down. Don’t want to sacrifice the rear seats? Subaru has included roof-rail brackets so you can mount a basket, bike rack, or tie a boat down on the roof.

As for pricing, the past generations of Legacy somehow got tagged as expensive sedans with fuel-hogging six-cylinder models, but the new generation arrives with prices that should stun the segment. Starting at $26,395 and offering things like EyeSight, LED headlights, high-beam assist, heated seats, automatic climate control, Apple CarPlay, and Android Auto, the Legacy offers outstanding value.

Touring models get the big infotainment system as well as rear automatic braking, dual-zone climate control, and a sunroof to go with the StarLink connected services and costs $30,295.

Then you can step into a Limited model for $34,295, or a Limited GT with the 2.4-litre turbo for $36,295. Limited models feature a heated steering wheel and heated rear seats in addition to an upgraded sound system, power-adjustable seats, and a rear-view mirror with HomeLink controls.

Finally, there are the Premium and turbocharged Premium GT models that cost $37,095 and $39,095 respectively. The Premium trim comes with the high-end Nappa leather, vented front seats, the DriverFocus monitoring system and a front-view camera (in addition to a CD player for some reason.)

SUV – But with a Trunk

If you were to list out all the updates Subaru has made to the Legacy without mentioning its body style, you’d think it’s an SUV. Look: “It now has a safer structure, more rear-seat space, more cargo space, a fuel-efficient turbocharged engine, and a roof-rack mounting system.” With so many buyers leaning towards SUVs, it’s going to be a tough sell, but the Japanese automaker is being creative with its marketing. It’ll call the Legacy “the SUV of sedans,” and there are no arguments there. It can be just as capable as many compact SUVs out there while being more fun to drive and fuel-efficient as well. If that still doesn’t impress you, at least you can take comfort in knowing that many of these updates will come to the Outback very soon. 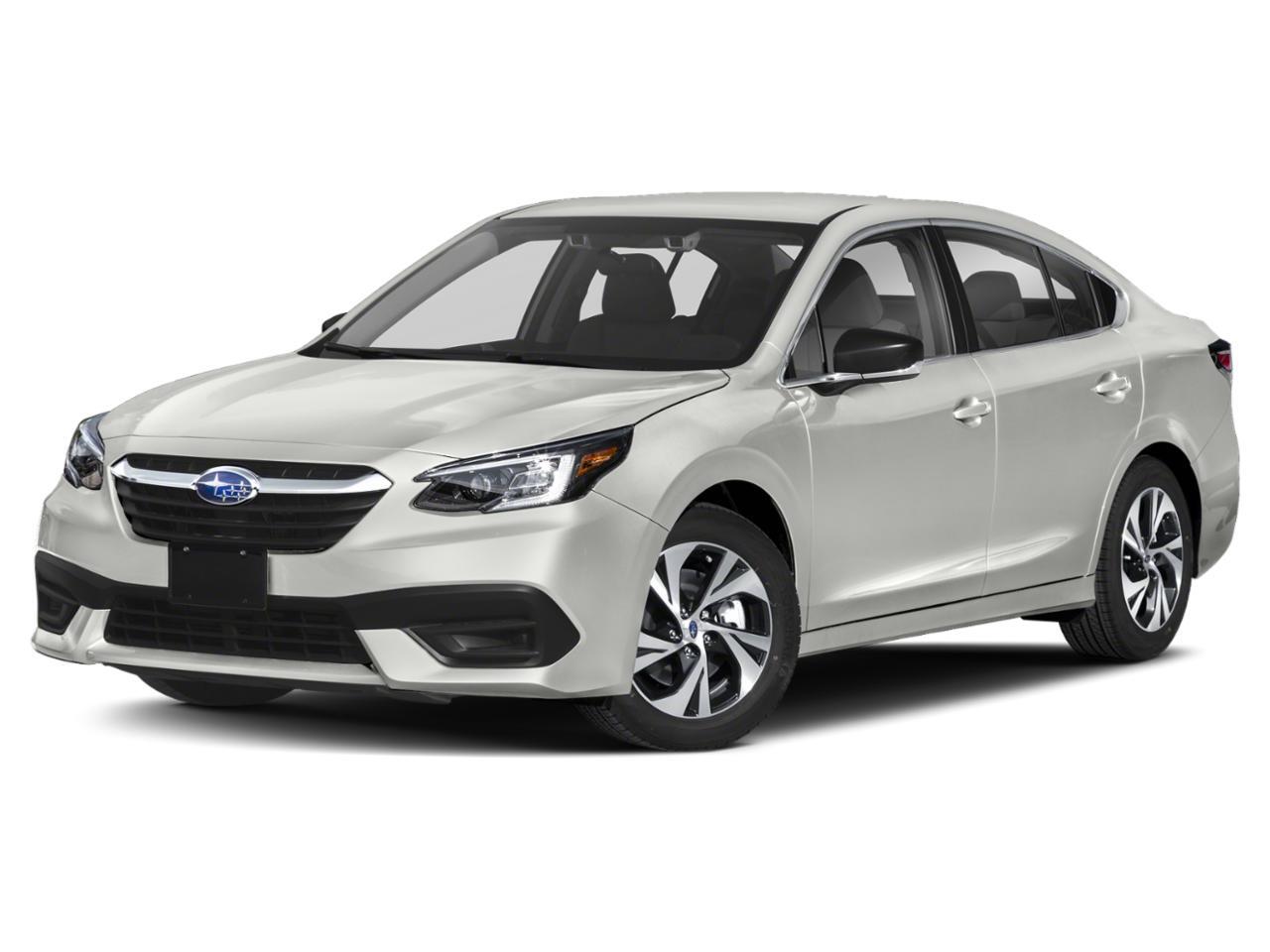 About Sami Haj-Assaad
Sami has been a road test editor and features writer for the past seven years, earning a number of AJAC awards for video and writing. He's also a member of the World Car of the Year jury.
Follow me
You may also like
AdChoices
Latest Articles
﻿