You’ll often hear the term “new” thrown around about cars – and it’s often prudent to ask a few follow-up questions.

Hyundai is known for packing a lot of feature content in at reasonable price points, and the Tucson is no exception, especially where the stuff Canadians love is concerned.

Advertising agencies use this word liberally. It can refer to anything – a complete tip-to-tail redesign right down to the nuts and bolts, or nothing but a new grille on the front.

So when you see advertisements for the 2019 Hyundai Tucson and the word “new” appears, here’s the skinny: It’s not a complete overhaul. It’s a mid-cycle refresh. But that doesn’t tell the whole story.

There’s a lot more going on here than a new grille. There’s a new engine, new front and rear light designs with available LEDs, a dramatically redesigned interior, and an even longer list of standard and available features.

Before, the Tucson was a value leader, but it felt like a compromise to access good feature content at a low price. Now, it’s edging closer to being added to shopping lists on its own merits.

A new engine, a better match

The upgrade engine is new for 2019. Gone is the 1.6-litre turbo in favour of a 2.4L naturally aspirated engine, producing 181 hp and 175 lb-ft of torque from 4,000 rpm and paired exclusively with a six-speed automatic transmission.

On initial review this may seem like a step backward, and I’m typically the first to complain about the relative sluggishness of engines that aren’t turbocharged. But honestly, this combination is a better fit for the vehicle and will keep most compact SUV buyers happy. It gets going well off the line and stays responsive, feeling eager to respond with downshifts when they’re called for, without the need to enable sport mode.

Unfortunately, this isn’t typically a very fuel-efficient sort of setup, and that aligns with my real-world experience. Natural Resources Canada rates this engine, which only comes with all-wheel drive, at 11.0 L/100 km city, 9.1 highway, and 10.1 combined. When I returned this after a week that was admittedly heavy on city driving, I showed a reading of 14.3. I tend to be less gentle on a throttle than most people, so take that for what you will.

The Tucson’s on-road manners are relatively good for the price point – maybe not especially dynamic but certainly flat, steady, and predictable; all of which are desirable qualities in an SUV like this. The ride is perhaps a little on the rough side, but it’s within the realm of fair for the price point.

On the two lower grades, a 2.0L engine is available with standard front-wheel drive and optional all-wheel drive. At 161 hp and 150 lb-ft of torque, without having tested it myself, I would guess that it would need too much urging along for me to enjoy quite as much – but that’s why it’s presented as a budget option.

A great balance in looks, for now

The Tucson is in a sweet spot right now where it’s not quite time to tear the sheet metal apart yet but it’s benefitting from some incremental exterior improvements. That means that the cascading grille that’s already seen use on the Kona and Santa Fe is also applied here, but it’s matched with a gently massaged headlight design that’s not as thin and aggressive as on the two newer vehicles. It also hasn’t had quite as many of the lights and reflectors pushed down the tailgate. To me, the balance that it all strikes now on the Tucson is just right. There’s a good chance that will change with the next big redesign, though, so enjoy it while it lasts. In the meantime, keep guarding your pant legs as you get in and out in sloppy weather. Wrapping the doors around the body at the base is too big of an ask in a refresh. 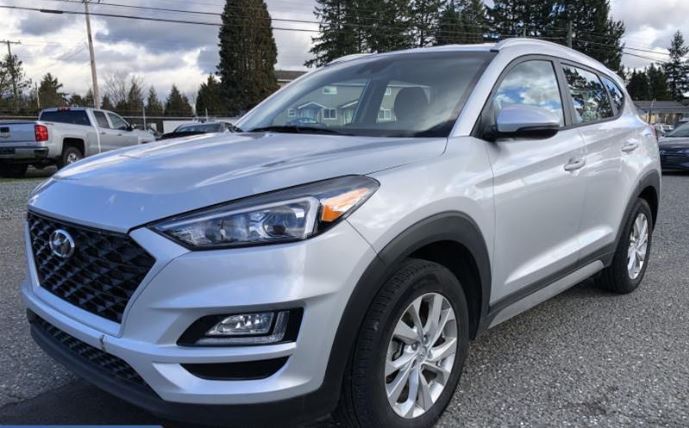 Inside, the changes are far more dramatic. Before, I didn’t consider a Tucson an especially pleasant place to spend time with its lack of light and a sea of dark plastic. Now, a new layout, slightly lighter colouring in the upholstery, and the panoramic sunroof that’s standard on the top three trims add light and an airiness that feels like night and day by comparison.

The centre stack has been completely redesigned, and it resolves one of my primary complaints. The infotainment screen is now mounted independently on the dashboard and has been pulled closer to the cabin, which means that although many of the controls are still on the right side of the screen, I can now reach them without having to lean over in my seat. Combine this with standard Apple CarPlay and Android Auto, along with great usability throughout the rest of the infotainment system, and it remains among the better ones out there, now with improved ergonomics. Hooray!

Hyundai is known for packing a lot of feature content in at reasonable price points, and the Tucson is no exception, especially where the stuff Canadians love is concerned.

With a starting MSRP of $25,599, heated front seats and exterior mirrors are standard equipment along with 17-inch steel wheels and the 7-inch infotainment display. A heated steering wheel and rear seats, along with alloy wheels, blind spot collision warning, lane-change assist, and rear cross-traffic collision warning are added at the Preferred trim ($27,999 MSRP), which is just one level up from base where the entry-level 2.0L engine is still in play.

These last three features in particular are available with other manufacturers at much lower price points than they are here, where the invoice pushes past $40,000 once all of the fees are factored in – a scant disappointment among an otherwise stellar feature line-up. If they’re extremely important to you and your budget is more limited, consider getting better acquainted with Toyota.

If there’s one weakness in the Tucson that the refresh couldn’t fix, it’s that the cargo area is small, even among the smaller competitors in the segment. At 877 L with the second-row seats up – which, by the way, is split 60/40 with reclining seatbacks as standard equipment – and 1,754 L with them folded, even the diminutive Ford Escape beats it at 964 L and 1,925 L respectively. More importantly, the entire area is completely flat, which leaves nowhere to stow those little bits and bobs that otherwise get left floating around in the entire space while you drive.

It’s also worth noting that the middle seatbelt for the second row is still the ceiling-mounted kind, meaning that it’s either directly in your way while it’s bucked or it’s flopping around in your upper peripheral vision when it’s not.

If there’s one thing that can be said about Hyundai, it’s that the company pays serious attention to constructive criticism and works hard to constantly evolve. The result of that culture is iterative but important changes like those reflected in the 2019 Tucson. A car that was best considered middling a couple of years ago is working its way upward and, both as a value proposition and an all-around well-performing vehicle, is becoming impossible to ignore.

About Stephanie Wallcraft
Stephanie Wallcraft is the child of an auto worker and honed her passion for cars in the grandstands of the Molson Indy Toronto. Today she continues the family tradition by writing about cars and motorsport for publications across Canada.
Follow me
You may also like
7.9