SACRAMENTO, California – A few years ago, I did my first Jeep Jamboree – a fantastic family event for anyone with a Jeep who has ever thought of getting out of the mall parking lot and into the off-roader’s natural habitat. It was there, after watching a larger four-door Wrangler make a few extra attempts to fit between some tight trees on our trail, that I decided the only true off-roader’s Jeep was a two-door Wrangler.

Since then, I’ve had the opportunity to pilot a bone-stock four-door JL Wrangler Rubicon through some astonishing conditions and watched a Grand Cherokee Trailhawk crawl over some gnarly obstacles. I’ve even driven the Compass and Cherokee on the Rubicon Trail.

And yet still, when Jeep announced the Gladiator, I scoffed.

And, “Look at the length of that thing, it’s gonna get hung up on everything!”

Once again, I was wrong. Way wrong.

The 2020 Jeep Gladiator is the real deal.

The Jeep folks state that the Gladiator (or “JT” for Jeepers) shares less than half of its overall part count with the JL, but let’s get real here, there’s a lot of Wrangler here, and a boxy butt.

It means that on-road, like the JL Wrangler, the Gladiator is surprisingly polished (at least by truck standards). Buyers willing to spend for an Overland or Rubicon trim can have a very well-equipped rig indeed with safety and convenience features not even imagined when the Comanche – Jeep’s last pick-up – left our market nearly 30 years ago.

Like the new Wrangler, the Gladiator can be loaded up with features for comfort (heated seats, heated steering wheel), convenience (parking aids, keyless entry) and safety (blind-spot monitoring, rear cross-traffic warning). Jeep’s fourth-generation Uconnect infotainment system is excellent too, with sensible menus and operation on the optional 8.4-inch screen, and of course Apple CarPlay and Android Auto connectivity. One of the speakers in the sound system is removable and becomes a portable Bluetooth speaker.

During our California drive, we had ample time in town and on the freeway to confirm that the JT – especially in Overland trim – is as comfortable and composed as anything else in its class. The back-end is stiffer than the Wrangler, and it’s noticeable, but the ride is far from abusive. Road, wind and engine noise levels are reasonably subdued; however, this can vary depending on how the machine is spec’ed. Driving back from our off-road adventure at 80 miles per hour on the interstate with the soft-top peeled back was plenty noisy. And the optional mud-terrain tires were decidedly more squirrely on the highway than Gladiators equipped with less aggressive rubber, but course, both of these compromises are to be expected.

It’s still a Wrangler at heart, which means the steering is slow and there’s ample lean, which is necessary for off-road control while crawling over things. The brakes felt best-in-class to me, and are the largest of any mid-sized truck, and they’re now vented as well, unlike the Wrangler’s solid discs.

Off-road, the Gladiator is Trail Rated, which means it needs to meet Jeep’s standards for water fording, ground clearance, and suspension articulation. That’s all fine and well for marketing, but when we went up into the hills outside Sacramento, the Gladiator was put to the test climbing over rock mounds and through some seriously muddy trails to prove its mettle. 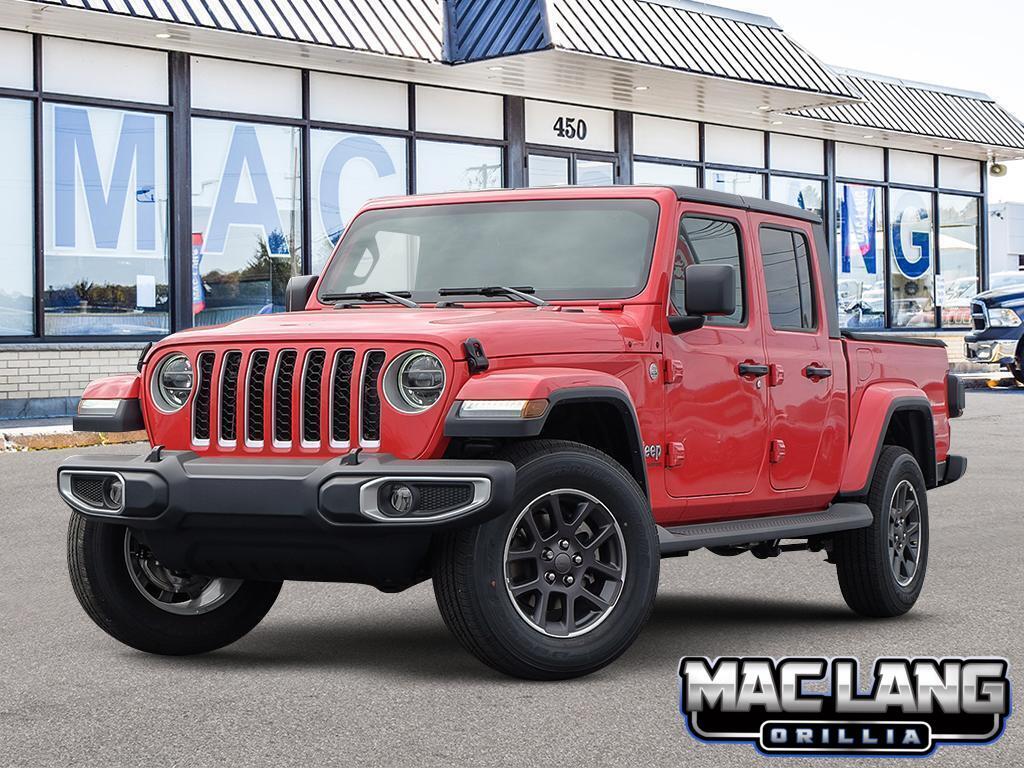 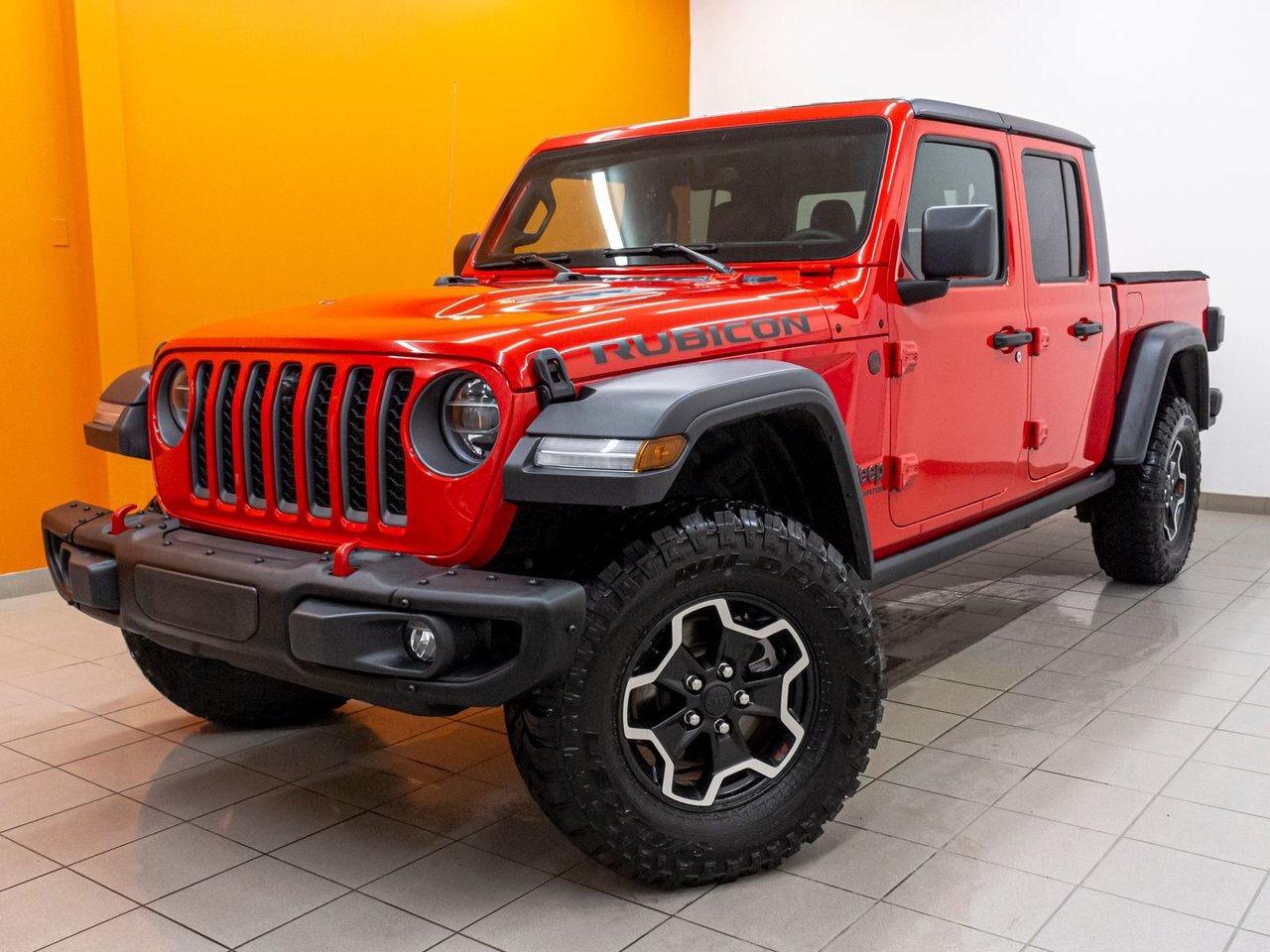 With a longer rear overhang, the departure angle is reduced from the Wrangler’s 37 degrees to 26 degrees, and with a wheelbase nearly 500 mm – half a metre! – longer, the JT’s breakover is reduced from 22 degrees to 20.3. For those keeping score, the Gladiator’s approach and departure angles are significantly better than even Toyota’s Tacoma TRD Pro, and the ground clearance, at 280 mm, is by far the best in its class.

I fully expected the Gladiator to feel bouncier and less controllable over rock-climbing situations than the JL Rubicons I’ve driven; but despite some very slick, rocky surfaces, the big Jeep was well-disciplined, and the amount of suspension articulation afforded, especially with the electrically-controlled sway-bar disconnected, was incredible.

The Gladiator Rubicon also wears 33-inch all-terrain Falken tires (with Falken Mud Terrain tires optional) and features Jeep’s robust Rock-Trac four-wheel drive system including Dana 44 axles, and electrically locking differentials. The Gladiator should be the most off-road capable mid-size truck by a serious margin, but we will reserve final judgement until we have driven the Chevrolet Colorado ZR2 Bison.

Tackling the mud and rock trails with a certain level of competence should be expected of a Jeep truck. What is more surprising is that the Gladiator is a legitimate workplace, utility machine. This is where the Gladiator differs most from the Wrangler. Jeep’s engineers beefed up the frame and gave the JT progressive rear springs and a thicker rear sway bar, plus a 5-link coil rear suspension directly from the Ram 1500. The axle tubes are 37% thicker up front and 14% thicker in the rear.

When equipped with the Max Tow package, it all adds up to a best-in-class tow rating of 3,470 kg. What’s more, the greater wheelbase and overall length of the Gladiator versus competitive trucks, is likely to help for towing stability. We were afforded a brief opportunity to haul around a 2,300 kg wakeboard boat, and the JT managed with no issue. The Gladiator does not yet come with a trailer brake controller, though we were told one will become available through Mopar soon.

The payload capacity of 726 kg, is again, top of the heap amongst mid-size trucks. The five-foot box is competitive in size with other four-door mid-sizers, though it’s not nearly as deep as the Ranger or Colorado’s. Jeep’s designers claim this was deliberate in order to make stuff inside the box easier to reach, though I’d wager it has more to do with packaging limitations and perhaps styling.

The tailgate is damped and offers a secure mid-point as well as being fully up or fully down, enabling a sheet of plywood to fit atop the wheel wells and on the half-reclined gate.

The rear seat folds down flat in a 60/40 split, plus the seat base flips up to allow a flat floor for additional utility. There are boxes and cubbies and cleats and mounting points and plug-ins all over the Gladiator; plus, many of the Mopar accessories for the Wrangler are a direct fit here. Jeep has even stamped a dimpled spot at the front of the steel box where a dirt bike’s tires should line up if you’re hauling a two-wheeled toy.

Right now, all Gladiators are motivated by Jeep’s venerable 3.6L V6 that puts out 285 horsepower and 260 lb-ft of torque – figures that are mid-pack in both measures. Jeep still offers a choice of an eight-speed automatic or (praise be!) a six-speed manual transmission. I had an opportunity to drive trucks equipped with both transmissions and the more efficient eight-speed is so well suited to the rig that you’d have to be a die-hard stick-shift fan to choose otherwise.

A 3.0-litre turbodiesel engine is coming sometime in 2020, and It will dispense with 260 horsepower, and a monstrous 442 lb-ft of torque, and will be available only with the automatic transmission. Jeep’s spokespeople say there is no plan for the 2.0-litre turbo four cylinder from the Wrangler to make it to the Gladiator.

The doors on the Gladiator are the same as those found on the Wrangler, which means the rear door is still cut on the same angle needed to accommodate the wheel well on the smaller rig, but needlessly limits entry and exit to the backseat. It’s a cost-cutting measure, of course, but at least stylistically, the angle aligns with the downward slope of the rear wheel arch.

Of course, if the shape of the doors bothers you, simply take them off. Hell, while you’re at it, why not get rid of the top, and fold down the windshield too? You sure can’t do that with any other pick up, and that, along with the Jeep’s styling, is likely to help sell as many of these trucks as its formidable capability.

In 2018, Jeep sold a record 1.59 million machines worldwide. The Gladiator will be a global product for the brand, and is sure to help push future sales notably higher. The internet fever over the Gladiator is high and now that Jeep has proven that the JT is brilliantly capable as an off-roader and a work truck, it is sure to be a runaway sales success.

When driving the Gladiator, I was never so happy to be have been so wrong. Jeep’s new mid-size truck is my runaway favourite in the class.