SAN ANTONIO, TX – Most folks learn as children that it’s somewhat rude to interrupt people when they’re speaking. Yet this next-generation 2020 Mercedes-Benz GLE midsize luxury SUV, for all its futuristic artificial intelligence and amazingly advanced technology, seems so eager to show off its AI smarts that it will cut into your conversations unapologetically if it detects the “Hey Mercedes” trigger catchphrase.

This focus on technology in the new GLE is apparent as soon as you open the door.

Or even words to that effect – and sometimes not even involving any of those two particular words.

The function is aimed at a new generation of Google Home and Alexa users who just ask their device for whatever it is they need at home, and seems a useful idea in an all-new vehicle brimming with technology, touchscreens, and features that potential buyers and owners may not even be aware of, such as advanced new virtual reality driving directions on its navigation system.

In a day and a half of driving various versions of the new GLE at its international launch, it ended up reminding us often that it’s actively listening. Intently.

Artificial intelligence to the max

Perhaps the AI involved here would be smart enough over time to learn to understand the driver better. It also seemed to interrupt my driving partner more, perhaps because of his British accent, but possibly because he simply talked more, or was more aggravated by its “How can I help you?” interjections.

This no-touch function that’s very useful in the kitchen when you’re washing dishes, or running around getting breakfast for your kids during the morning rush, seemed a bit superfluous when you’re sitting in the driver’s seat, and can just use the simple “speak” button on the steering wheel to call up the handy Mercedes assistant.

There is a way to turn off the “Hey Mercedes” trigger, which I’d be tempted to use if it was my GLE. But sadly, that makes it difficult for your passenger to turn on, say, the seat massage function without digging through the many centre touchscreen menus to get to it, though doing so allows you to scroll through the many massage and heating options available.

You’ll definitely start asking that Mercedes assistant to do things for you, especially early on when you’re unfamiliar with its functions and many menus, or simply busy driving. That Mercedes assistant is so smart, it managed to understand my request to turn off the heated aspect of the massage setting, but keep the massage going. On the other hand, neither of us could get it to open the sunroof, so it can be hit and miss, though it apparently worked for some of our colleagues.

Something tells me the voice functions may just work for mischievous kids with loud voices from the back seat.

This focus on technology in the new GLE is apparent as soon as you open the door, with the instrument binnacle replaced by a high-definition touchscreen that allows the driver to reconfigure the speedo, tach, and whatever you’d like in between them: phone, GPS, media, or car/trip info. The dials will glow red in Sport mode, and there are various display modes the driver can choose (Classic, Sport and Progressive). But the navi map won’t flow over the dials (as on Audi’s latest system) or into the centre screen that’s physically attached.

Look down in between the seats, and Benz’s former rotary knob has been replaced by a touch-sensitive pad and home button, along with handy direct buttons to take you to those common functions noted above, plus camera, vehicle settings, volume scroll wheel, and a customizable hard button that the driver can program to various functions.

Note that there’s no shifter or shift buttons here taking up valuable electronic or cupholder space: that’s been relegated to a thin stalk on the steering wheel, which looks a touch insubstantial at first, but works well. And the transmission picks up points for its standard shift paddles, which are subtle enough to not be intrusive, but useful to aid in passing power, especially with the base 2.0-litre turbo four-cylinder engine.

Once underway, what immediately becomes apparent is that Mercedes-Benz has taken refined quiet and sumptuous comfort to a new level here.

The GLE provides a cocoon of silence at highway speeds that’s also reflected in the comfort-oriented advanced suspensions underneath.

That base turbo four engine in the GLE 350 provides 255 hp and 273 lb-ft of torque, which is impressive for such a small displacement engine, especially given its composed nature. Clearly, it feels less responsive on the road than the turbocharged 3.0L inline-six (bye-bye V6) in the GLE 450, which pumps up horsepower to 362 and low-down torque to a hefty 369 lb-ft available from as low as 1,600 rpm.

And in the GLE 450, its 48-volt battery allows an extra overboost function that provides another 21 ponies and a healthy 184 lb-ft of torque, while allowing the 450 to recuperate energy similar to a full hybrid. 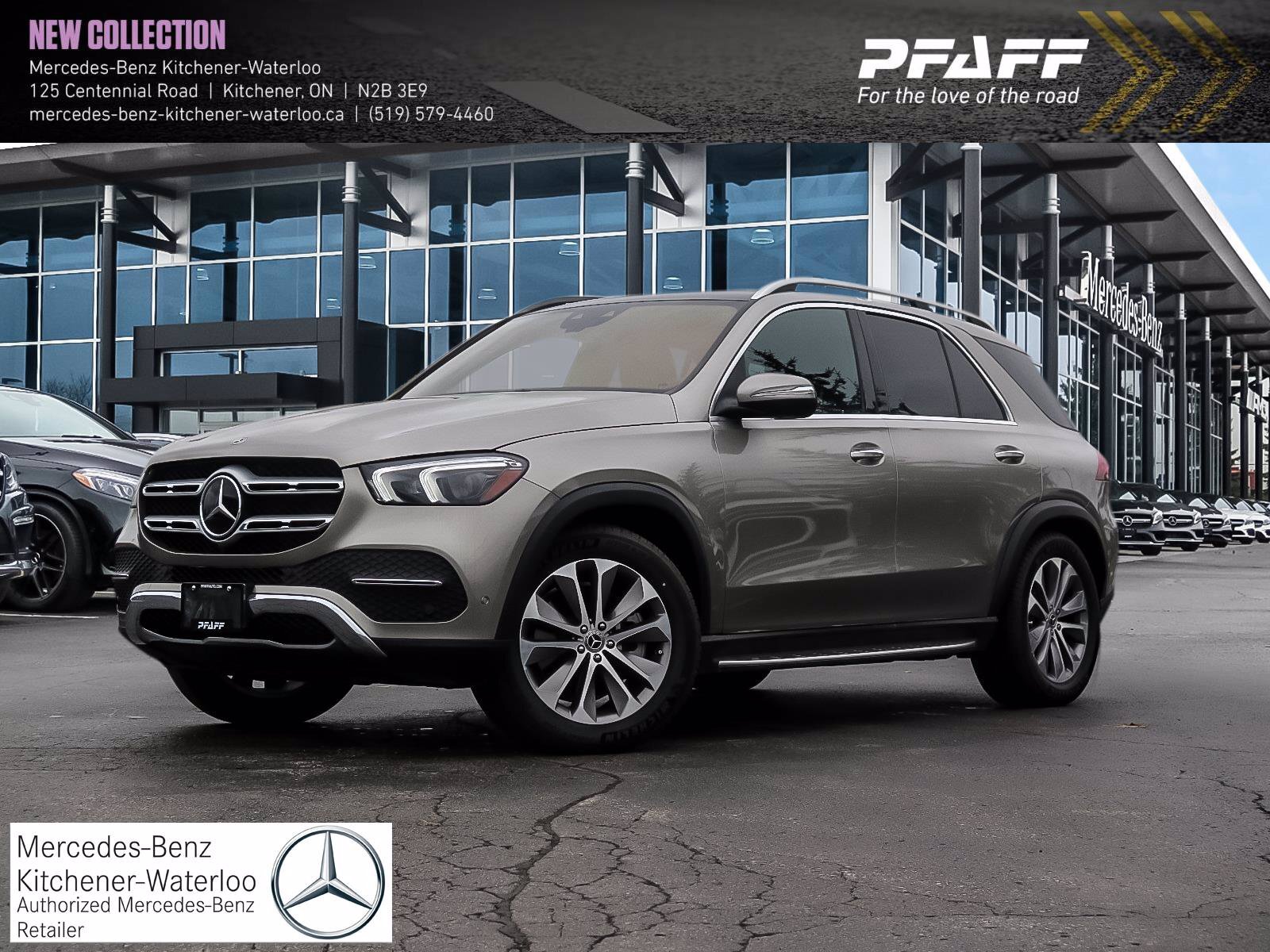 These respective powertrains and outputs are reflected in the two GLEs hitting the zero to 100 km/h mark in 7.1 seconds versus a sport sedan-worthy 4.7 seconds in the GLE 450.

But the GLE’s refined personality does not entice its driver to thrash it, but to sit back and enjoy the myriad comforts, heating, massage, and active seat functions. There is a roomier interior, the wheelbase extended 80 mm from the prior GLE, which allows for the first time in the GLE (and its ML predecessor) to offer an optional third row of seats. This will help it better compete with the likes of the BMW X5, also all-new for the 2019 calendar year, and the Volvo XC90, our reigning 2019 autoTRADER.ca Top Pick of 2018, and the winner of a recent three-row luxury SUV comparison test, which triumphed over the Acura MDX, Lexus RX L, and outgoing X5.

The optional heated armrests in the centre console and front door inserts welcomed us back from every photo foray outside the GLE on this particularly cool and misty drive in and around San Antonio. Plus available heated and cooled cupholders promise to keep your favourite drinks better longer, no matter the season.

Of those close luxury SUV rivals mentioned above, Mercedes-Benz seems to have targeted and possibly bested each of them in their own areas of speciality. The GLE at least matches the Lexus RX for its impressively creamy smooth ride and silent highway cruising; calls out the Volvo and Acura for advanced technology content inside, and especially with the GLE 450; knocks on BMW’s door to at least challenge it for the class-leading performance and dynamics the X5 has long been known for in this segment, sometimes to the detriment of ride quality.

The GLE’s dynamics shine brightest on the 450 because there’s an available advanced air suspension that’s unique in the industry, eschewing anti-roll bars in favour of an advanced hydro-pneumatic system called E-Active Body Control. It can be configured to lean into corners, which feels subtle yet amazing on the road. Interestingly, if you select Sport with the drive selector, this function turns itself off, the engineers arguing that performance driving settings pull up stiffer suspension settings for drivers who don’t want the car to lean in corners, period.

The optional E-ABC system, only available on the 450, also counteracts body roll, forward pitching, and squat on a full-time basis, says Mercedes-Benz, but neither the 350 nor the 450 we drove without the E-ABC system seemed to exhibit much of either with its conventional base or active suspension on the base 450. And none of the suspensions counteract the sensitive stomachs of kids prone to car sickness, one engineer confessed, no matter how advanced.

Perhaps the system’s most impressive party trick is that there’s a function in which the air suspension can almost jump each wheel up and down quickly enough that it can extricate itself from deep mud, snow or sand.

Foibles, there are a few

Outside its defeatable propensity to interrupt the driver mentioned above, there are other minor irritants that potential GLE owners should be aware of before it arrives in mid-2019 to Canada. The first is that it has no regular USB connections: the GLE was “future-proofed” to use the latest USB-C connectors, which meant that none of the wires we had on hand would work to connect Apple CarPlay/Android Auto to the GLE.

An engineer explained that all upcoming devices and phones would use these new connectors, apparently, and so all GLEs will come with one adapter that could be used with current USB connectors. Unfortunately, that’ll leave all your passengers battling for one unless you bring your own, at least for the next few years, or until everyone has the latest USB-C compatible devices.

Another is the tiny side step that is supposed to help drivers and passengers climb in and out, but in reality is so small that I could barely fit my ankle on it enough to be able to help lift up or down. And the misty and rainy weather highlighted that the rubber inserts in the metal fixed step actually aren’t rubber, or at least didn’t prevent it from becoming very slippery in the rain. The power retractable side steps on some of the larger luxury SUVs and newer pickup trucks are the high-bar side steps.

And lastly, without any pricing yet available in Canada, it’s impossible to gauge exactly what kind of value the GLE will offer. As we saw with the BMW in the previous comparison test, there will be an extensive list of options available on the GLE, and a fully loaded one could easily creep up into six-figure territory. That’s tough for a segment where prices typically start in the high $60K range.

Even if one concedes the technology crown to the GLE, and the upcoming new-generation BMW X5 will likely challenge that, should the GLE be priced $10K–$30K above its three-row rivals when fully equipped – or priced evenly with rivals but with more features lagging on the GLE’s options list – it’ll hurt that value equation as well. Yes, the famed three-pointed star on the hood is worth something, and perhaps quite a lot to most buyers.

The 2020 Mercedes-Benz GLE wows in a number of areas, from its comforting ride and pampering luxuries, as well as advanced technology in both the suspension and underhood, especially in the range-topping GLE 450. An even more technically advanced plug-in hybrid version is on its way, but the vast majority of GLE models will be either the 350 or 450 tested here. No matter where it lands on the pricing/value scale, the GLE will surely challenge if not surpass the class leaders in a number of the above areas.

And with the passage of time, not only will its USBs work better, but it’ll likely machine-learn a bit better on how to help, versus interrupt, its driver.

About Michael Bettencourt
Michael Bettencourt has been writing about cars and automotive topics for over 25 years, with over two decades as a member of the Automobile Journalists Association of Canada (AJAC). A journalism graduate of Ryerson University, he has won multiple awards for technical, vehicle testing, and green vehicle writing. Currently a judge for the Electric Vehicle Dealer’s Association awards, he bought his first EV in 2011, and follows the EV industry closely.
Follow me
You may also like
AdChoices
Latest Articles
﻿