BOWMANVILLE, ON – I’ve never considered myself a motorsport writer. I have, however, spent many years on the periphery – supplying racing illustrations, writing colour features, and occasionally, providing actual racing coverage. Like stick-and-ball team sports, the points and statistics hold very little interest. For me it’s the spectacle: the overwhelming cacophony of colour and sound and smells, the glorious cars, the thronging crowds, the backstage alchemy between crew and racecar in the paddock.

A supercar for the masses

You don’t have to be a staunch, lifelong race fan to know who Ron Fellows is. Anyone with even a fleeting association with racing, or a soft spot for the Chevrolet Corvette is probably familiar with the man who’s undoubtedly the greatest road-racer Canada’s ever produced. Fellows’ long, illustrious career includes wins at the 24 Hours of Le Mans, the Rolex 24 Hours of Daytona, and NASCAR; and he’s considered one of the most versatile racers in North America. His yellow C6-R was such a regular sight in the winner’s circle that his name’s become almost synonymous with the Corvette.

In a serendipitous turn of fate, our first drive of the 2019 Chevrolet Corvette Z06 arrived courtesy of the man himself, with an invitation to the Ron Fellows Driving Experience at Canadian Tire Motorsport Park.

Fellows’ flagship Spring Mountain location – Corvette’s official performance driving school – was established 10 years ago just outside of Las Vegas, Nevada, teaching advanced driving techniques to students of all levels, from beginner to racing-licence holder. The year-old CTMP-based program is a one-day, compressed version of the Nevada school’s gruelling three-day schedule, designed to let corporate clients experience the legendary Grand Prix circuit once driven by Jackie Stewart, Mario Andretti, and Juan Pablo Montoya – just to name a few. Compared to Spring Mountain’s nearly $4,000 sticker price, the $1,050 per person cost of the CTMP event is a relative bargain – but it can only be booked as a corporate team event.

The Driving Experience fleet consists of the Chevrolet Camaro SS 1LE and Corvette Z06 equipped with Z07 Performance Packages – but other than a couple of reconnaissance laps in a Camaro my time was spent primarily behind the wheel of the ’Vette.

My experiences on this daunting circuit have been mainly while driving smaller, agile German cars – Porsches, BMWs – and the nimble Miata two-seater. But as instructor, and Ron’s son, Sam Fellows points out in our introductory classroom session, many a Porsche or McLaren supercar owner has had their “butt kicked by someone who came along in a Corvette and knew what they were doing.”

Once known as Mosport, the legendary GP road course commands respect from even the seasoned professional. The 3.96 km circuit boasts changing elevations, a notorious off-camber blind turn, and one of the most challenging hairpins in racing – the two-part turn named for Sir Stirling Moss, called Moss Corner. It’s followed by the Andretti straight – a blistering fast mile-long strip of pavement where speeds can reach in excess of 300 km/h.

“Respect the track,” says Fellows Jr., as we slip on our helmets. These are then secured to HANS restraining devices, further underscoring the importance of playing safely on this circuit.

Climbing behind the wheel of a decal-emblazed silver Z06, I adjust my seat and mirrors and push the start button. The Z06 roars to life with a beefy rumble from the 6.2L supercharged LT4 V8. I’d driven 550 hp 911 Turbos around this track a few times, but the Vette has an extra 100 horsepower on the Porsche. Output is a massive 650 hp with matching torque, and it’s channelled to the rear wheels through a seven-speed manual transmission. The aforementioned Z07 pack adds four-wheel carbon-ceramic Brembo brakes, magnetic adaptive suspension, Michelin Pilot Super Sport Cup 2 tires, and some strategically sculpted aero bits including an adjustable rear spoiler. Specced as driven, the Z06 is roughly $140,000 – a hundred grand less than a Porsche 911 Turbo S with comparable performance.

The cabin is far less rudimentary than in ’Vettes of yesteryear, with attractive switchgear and stitched leather, but there are still a few hard plastics to remind you of its humble origins. I’d never been much of a ’Vette fan in the past, considering them brutish and rough and more straight-line bludgeon than handling car. But the current Corvette has evolved into a supercar for the masses, with sophisticated technology, a tightly balanced chassis, and in this case, selectable Magnetic Ride Control damping.

The clutch is firm but not heavy enough to prevent smooth heel-and-toe footwork and the steering is solid and quick. Using the toggle to select Sport or Track adds more weight to the steering while firming up the ride and quickening throttle response. Developed alongside the C7-R race car, the Z06 has monstrous speed coupled with an astounding 1.2 g of grip, aided by the wide Michelin tires.

The format is strictly “lead follow”, with each instructor setting the pace for a small group of two to three students. If that sounds a bit tame, consider that all of the instructors are professional performance drivers – many of whom are familiar names in the racing community – and the pace they set is anything but pedestrian.

It’s been at least a year since I’d last driven this track, so for the first two laps I pay close attention to the pace car to re-familiarize with the racing line and braking zones. Unlike some more technical tracks, CTMP has only one slow corner – the combination 5a and 5b, and can basically be driven in third and fourth gear. Without having to worry about shifting, I’m able to concentrate on the correct racing line (where the car retains the most stability and is therefore faster). As we start to pick up speed, the car hunkers down with an unshakeable grip through the turns. By this time I’m concentrating less on the instructor in front of me and more on the turns that lie ahead in order to achieve as smooth a line as possible. I’m still connected to the instructor via two-way radio. As luck would have it I’ve drawn Sam Fellows – a formidable racer in his own right – and his calm voice offers helpful advice through some of the trickier parts of the course.

Moss Corner is probably the most technically challenging turn, with a steep uphill right-hander into a two-part hairpin. As poor footwork usually affects my ability to downshift smoothly and quickly here, I opt to use the Z06’s rev-matching function which replicates the quick blip of the throttle produced through a properly performed heel-and-toe manoeuvre. I feel no shame at flicking the paddle-shifter-style tabs that employ rev-matching; the computer can perform it faster than any human and prevent the possible catastrophic results of 650 horsepower being suddenly thrust upon the wrong gear.

I’ve so far managed to stay on line and consistently hit my apexes. Sam suggests I switch to “Track Mode” which removes some of the stability “nannies” and accentuates the steering responsiveness. Our speed has steadily increased, and the car definitely feels more lively in this mode, rotating freely around the corners and squirming under hard acceleration and braking. I realize I’m holding my breath when I feel the ’Vette’s nose lift at nearly 240 km/h on the long Andretti straight. 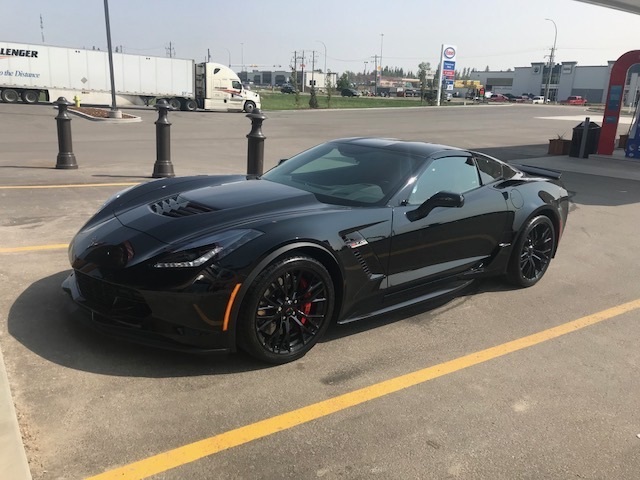 Compared to the more tractable, predictable Porsches I’ve driven, the Z06 is a powerful beast and I’m hesitant to anger it by pushing past my comfort zone. When the checkered flag drops and we roll into the pits, my left leg is sore from bracing against the dead pedal and I’ve worked up a sweat. The contoured sports seats provide plenty of support, but the lack of a six-point harness left me working hard to stay put while cornering. Still, it’s a deeply satisfying experience to properly negotiate this legendary circuit at speed and finish the day without incident.

But the best was yet to come. Although I first met Ron Fellows more than 15 years ago and have since written about, and even created illustrations of him many times since – I had never ridden shotgun with him during a hot lap. Strapping into a Z06 bearing his name on its flanks, we head onto the familiar ribbon of tarmac.

The unwieldy beast became fluid and smooth in his hands as the background disappears in a blur. Hands, feet, and machine working in harmony, it’s the perfect example of man in his element.