For decades, the Camry has been the rational choice in the midsize sedan market. Safe, reliable, quality, comfortable, boring. In Toyota's own words, the dad car. But Toyota doesn't want to be boring anymore. As Camry Chief Engineer Masato Katsumata said, the brand has to "move Camry from the rational choice to the more emotional choice." But after decades of beige, can Toyota make the Camry the driver's choice in the midsize sedan segment?

Definitely not your dad's Camry.

Toyota is making some big changes to the all-new Camry to help make it the emotional choice. It's the first Toyota to be a complete implementation of the Toyota New Global Architecture. That's a new platform for the new car, but also a design philosophy to add fun to the car. The hood line is 40 mm lower, and the roof is 25 mm lower. The car is 20 mm wider, for a wider, lower, sleeker stance. It has an eight-speed auto instead of a dual-clutch box. It's the first Camry with over 300 hp, and the first with quad exhaust tips. It also has two-tone paint on the options list and a bright red leather interior. Definitely not your dad's Camry.

This new model marks the first time that I've ever heard an engineer refer to a Camry as "visceral". But that's exactly what Katsumata said when asked why Toyota chose a V6 over a turbo four. The 3.5L V6 has a "more visceral appeal" than a four. And he's not wrong.

We started the day with a quick run to a short slalom course, where we drove a 2017 car against a similar trim 2018. The 2017 was exactly what I remembered the Camry to be. It wallowed through the slalom and was clearly unhappy to be prodded through a handling course. Even the ABS made angry noises. I expected the 2018 to be the same. But it wasn't. The 2018 cornered flat and level. At least by midsize sedan standards. Compared with the old car it's a night and day difference. The effects of the lower centre of gravity, firmer suspension and body control, and double-wishbone rear suspension are obvious. The new 19-inch wheels and low-profile tires give quick response and surprising cornering grip.

After the slalom course, I was starting to look forward to spending the day on the winding roads and red mud that criss-cross Prince Edward Island.

Even the engines are more lively and responsive than before. Both are new for this year and have direct and port fuel injection. The 2.5L four is up 25 hp to 203 hp and 184 lb-ft of torque and the 3.5L V6 has 30 more than last year taking the total to 301 hp and 267 lb-ft. Those are the most powerful non-turbo engines in the class, and the V6 is more powerful than all but the twin-turbo V6 in the Ford Fusion Sport.

The extra power is noticeable and the Camry accelerates briskly. Fuel economy is up on both too. The V6 is quiet and smooth - and capable of both conventional and fuel-sipping Atkinson cycle modes - but has a mean bark when prodded. When the windows are open, at least. Toyota hasn't reduced the amount of sound deadening in the new car, so the noise isn't always audible from inside. Even the hybrid, which now makes 208 hp, is quick to accelerate both from a stop and on the highway.

Gas models get a new eight-speed auto, thankfully shirking the trend toward CVT transmissions. The new Direct Shift eight-speed gives torque-converter lockup in gears two through eight. It's not dual-clutch fast, but it's not far off. It shifts smoothly and quickly.

The hybrid has Toyota's second-generation hybrid system. It uses a version of the 2.5L four and an electric motor attached to a CVT. It makes 208 hp and fuel economy drops to 4.9 L/100 km combined. During my first drive of the car, I averaged 4.5 L/100 km without really trying. The hybrid gets an SE trim that has a more sport-tuned suspension than L and XLE. SE and XLE get a Ni–MH battery, but the base L model has a lithium battery that improves fuel economy over the higher trims. New for this year, the battery is under the seat which allows for a fold-down rear seat and a bigger cargo pass-through.

Toyota calls the L and SE trims two different families. L, LE, and XLE trade some sport for comfort as well as a bit of luxury. SE and XSE are the sport models and get a different suspension and some exterior accents like the unique grille and faux vents on the rear bumper. XSE and XSE V6 get big quad exhaust tips. XSE and XLE trims have a panoramic sunroof instead of the smaller roof of the lower levels. The bigger roof trades a small amount of headroom front and back for a big look outside. V6 cars also have a 10.0-inch colour head-up display.

There is a new base trim for 2018. The L trim starts at $26,390, and has steel wheels and a smaller fuel tank (55 L vs 60 L). But even the base car has LED head and taillights, a six-speaker stereo, and the new Entune 3.0 infotainment system on a 7.0-inch screen. It also gets Toyota's Safety Sense P that includes pedestrian detection, radar cruise, auto high-beams, and lane-keep assist. Other trims see a price bump but match that with more content. 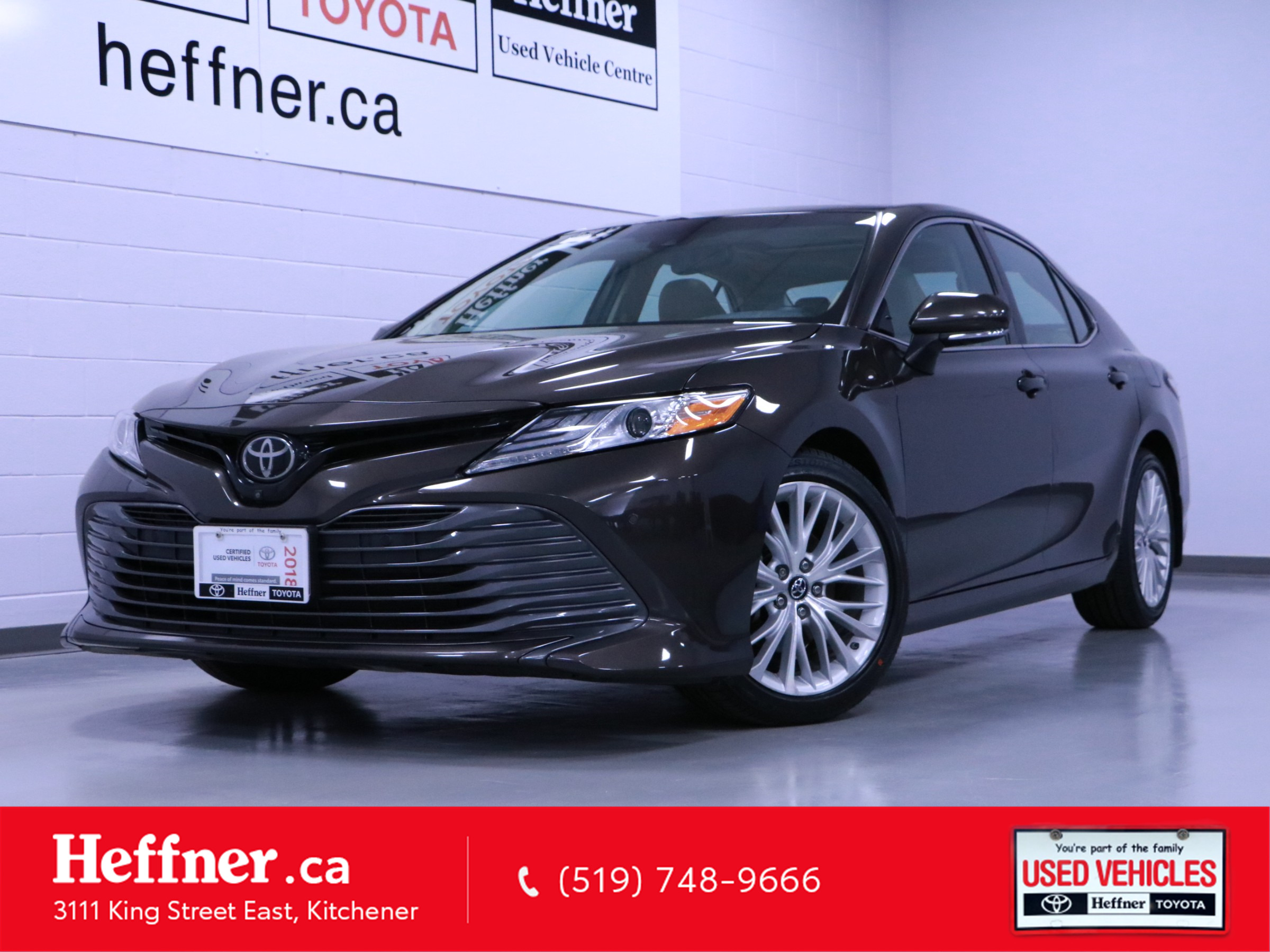 The new car also adds Toyota's intelligent clearance sonar for the first time. That detects obstacles behind the car when you're reversing and will reduce throttle or apply brakes to prevent a collision. That's standard on XLE, XSE, and XLE hybrid. Rear cross-traffic alert has been upgraded and will now brake automatically, and the backup camera has added pedestrian detection.

Toyota has continued to go their own road when it comes to infotainment systems, but this time that's not a bad thing. No, it doesn't have Apple CarPlay and Android Auto, but the upgradable system could add those in the future if customers demand it. The new system is much faster and much more appealing than the last-gen system.

Toyota's explanation for why they are using their own system instead of the CarPlay and Auto standards, and it's all about privacy. The big systems gather data about you, your driving, and your car. Keeping an in-house system helps Toyota control that information, helping to protect your data and privacy. At launch, Entune has four third-party apps. That's on top of Toyota's own apps for stock prices, sports scores, weather, fuel prices, and traffic. Scout GPS gives turn-by-turn navigation to even the base car. Yelp helps with finding local business, NPR adds public radio from the US, and Slacker radio enables streaming music, including CBC radio.

There are two upgraded system, both using an 8.0-inch screen. Entune Plus adds Safety Connect, an OnStar-like system that has a built-in cellphone to give emergency assistance. Entune Premium adds built-in navigation as well as destination assist. That system lets you use the Entune operator to set multiple destinations in the on-board GPS navigation.

So back to how it drives. The Mazda6 is the benchmark for the best midsize sedan for drivers. The new Camry, especially in SE or XSE trim, is in the same league. The steering is surprisingly well weighted. The ride is firm, far more firm than you would expect on even LE models, but it's also remarkably well controlled. It soaked up the worst pavement I could find, without a creak or groan, and without putting a wheel out of place.

Driving over potholes and dips no longer sends the car bouncing off the other side. It's still supple, but there is no floatiness. It feels like a European sedan suspension. In the words of Toyota's marketing campaign for the last model, it feels grounded to the ground.

Both engines deliver good mid-range power and the transmission downshifts quickly to keep the engine in the power band. Even the CVT in the hybrid responds quickly before the torque shoves you in the seat. The transitions between electric-only and hybrid operation are now completely seamless, with none of the slight hesitation that the old model delivered on occasion. The extra noise from the hybrid system is gone now. No more of the spaceship-like cacophony of whirs, hums, and clicks. Just a bit of electric motor noise on deceleration.

Toyota will be making big claims about the new Camry being the emotional choice and not just the rational midsize option. They're hoping that adding some fun to the car will attract more drivers away from ponderous SUVs back to the sedan segment. And this car can back up those claims. It's enjoyable to drive, and not just by big car standards. That's not a label that's been attached to Camry in a long time.