End of the day, Rondo’s cabin is designed to easily and comfortably keep up to the demands of an active family.

A five-door hatchback set somewhere between minivan and crossover, the Kia Rondo came priced from under $20,000 with flat-folding second and third-row seats, enabling up to 2,083 litres of cargo space. With easy access to a wide variety of seating configurations, Rondo can adapt in seconds to any combination of passengers and gear. The cabin is also fitted with numerous storage cubbies and compartments to help occupants stay organized on the move.

The initial generation Rondo in the Canadian market hit the road for model-year 2007, and carried on through 2012. With space galore, relatively low repair costs and solid-looking reliability, a used copy in good shape makes this one an ideal candidate for budget-minded shoppers after plenty of flexible space for a growing family. Some Rondo owners even use the vehicle as a delivery vehicle, a work truck, or a relatively fuel efficient weekend travel and adventure model.

End of the day, Rondo’s cabin is designed to easily and comfortably keep up to the demands of an active family. All models got advanced antilock brakes, six airbags including side curtains, whiplash-protection headrests and traction control. Three-point seatbelts are used at every seating position, and a crash sensor automatically unlocks the doors upon impact to help lessen response time of emergency personnel.

Power came from a standard 2.4 L four-cylinder engine with 162 or 175 hp, depending on the year in question, and a 2.7L V6 was available with up to 192 hp. Manual transmissions were available on some models and in some years, though most used copies of the Rondo will run an automatic. All units were front-wheel drive. Note that the Rondo LX was the base-model unit, while the EX was the more upscale version, with several EX grades available, including the EX V6.

In online owner reviews of the first-generation Rondo, space, feature content and fuel mileage are commonly rated highly. Many owners say the entertainment system is easy to use, and that the air conditioner is powerful and effective. Logical and easy-to-use control placement is also noted. Good ride quality and an overall nice-to-drive, easy-to-use characteristic round out the owner-stated praise points. A feeling of comfort and safety is also noted. As user ‘Steo’ put it, in his review on autoTRADER.ca, “If you don’t want a monster sized family van, this is the perfect sized car for a family that requires seven  seating from time to time”.

Though the majority of owners report few if any complaints about their Rondo, owners of models with the V6 engine may wish for better fuel mileage, and some owners have noted a cheap, low-budget feel to some of the interior plastics and trimmings.

As the newest unit covered by this used buyers guide will be at least five years old, shoppers are advised to start with a few standard checks ideal for a higher-mileage vehicle.

First, inspect the tires for signs of excessive wear, uneven wear across the treads which can indicate an alignment issue, and the brakes, for signs of worn-out pads or rotors. Brakes are best inspected by a mechanic, especially if you note any unwelcome squealing or scraping noises, as soft pedal, or unwanted pulsations from the brake pedal during light or moderate stopping.

Finally, have a good ‘listen’ to the suspension while driving the Rondo down the roughest road you can find. Travel over a rough surface to coax any unwanted popping, clunking or banging sounds of out of badly worn suspension components. If any are detected, have a mechanic assess the Rondo’s suspension for possible repair. This is especially true if you notice a loud banging sound, from the top of the front struts, on a rough road. Here’s some more reading about noisy front struts, possibly caused by a loosening of the upper strut nuts. This issue seemed to affect mostly 2009 units, and was covered by a Technical Service Bulletin (TSB).

Further, on the topic of suspension, here’s a thread where one owner reports a relatively rare problem with a broken suspension coil spring, noting that the repair was inexpensive, and that this was the only problem he had with his Rondo in nearly 100,000 kilometers.

Some owners have reported water leaks, evidenced by dampness in the lower corners of the cargo area. Inspect this area carefully, pulling up any carpeting and panelling, and inspecting for rust, dampness, or signs of water staining on the fabrics. If you detect any, the culprits could be a bad rear quarter window seal, or a blocked sunroof drain tube.

Note that a persistent airbag system warning light could be the result of a loose wiring connector, or a bad steering wheel clock spring, which facilitates the electrical connection that fires the airbag, when required. A bad clockspring can also render steering-wheel mounted controls and the vehicle’s horn non-functional. Confirm that all steering wheel controls work as expected, and that no airbag warning lights are illuminated.

Which engine to choose? Both look reliable, but numerous owners say there’s little detectable performance advantage from the V6, which is harder on fuel, and has a timing belt, which needs an occasional and fairly pricey replacement. With the four-cylinder engine, a timing chain is used, and largely considered maintenance-free, providing that all oil changes are carried out on time. Translation? A model with the four-cylinder engine performs nearly as well as the V6, but will be cheaper to run for the long term. If you’re set on a model with the V6 engine, be sure the timing belt isn’t overdue for a change. If it is, budget a few hundred dollars to replace it.

Other checks are just as minor: confirm that the reverse lights work properly, and if they don’t, start diagnosis with the reverse sensor switch. Check the instrument cluster for a Check Engine Light, and have the ECU scanned for stored trouble codes, which could be present due to problems with an oil pressure switch, torque converter issue, or crankshaft position sensor. Finally, start and stop the engine, several times, confirming that the ignition isn’t sticking, and that you can remove the key each time. A bad solenoid in the ignition system may be to blame if that’s not the case.

In your writer’s research, problems related to this generation of Kia Rondo were mostly of the minor, easily diagnosed variety, with larger, more worrisome issues reported rarely. A healthy used unit with a satisfactory mechanical check-up by a technician can be purchased confidently. 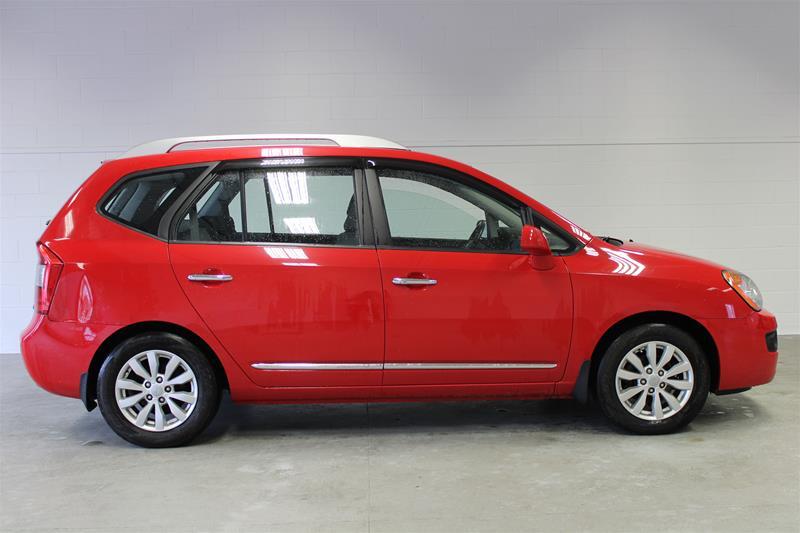