I have fond memories of the original Ford Edge – it is rare that I remember exactly what I was doing with certain vehicles since I drive so many of them: but the Edge I remember. It was a 2007 Edge SEL back in March of 2007 just shortly after they had hit showrooms. I drove that Edge to the GTA to pick up a rollbar for my beloved S2000 so I could begin the downward spiral into a track rat.

Looking back at photos from that Edge review surprisingly not much has changed here. Ford has refined and improved the Edge by making it more modern and upscale looking but it's overall shape and size has not changed much.

Despite the updated and refined looks of the exterior the interior is where the obvious improvements are. The old dash layout looks very dated now, while this new revision has finally struck that balance of too edgy to just right. Gone are the weird touch-sensitive buttons, or no buttons and Microsoft Sync (depending on the year / version). Now a good combination of well-laid—out buttons adorn the centre dash with Ford's new Sync system without the Microsoft help, or hindrance as it was.

I was thinking about the pricing structure of the Edge today, my tester is a loaded model (missing only the V6 engine) and it seems to be reasonably priced. By that I mean it is pretty typical for me to have a tester that is loaded and well over $50,000 even for a compact SUV these days. But the Edge is a mid-sizer that seems reasonably priced. On top of that Ford is offering a $1,500 discount right now.

So it seems like the Edge is good value, but in order for it to actually good value it must drive well and offer comparable features to the competition right? Let's look at the features offered. The usual suspects are here, dual-zone climate control, heated seats, Navigation and blind spot detection. But the Edge has way more than that, including radar cruise, collision avoidance, panoramic sunroof and self parking and something I didn't know existed, self un-parking.

That's right this vehicle offers a system that will automatically exit a parking space as well as enter it. Pretty cool, but who the heck is using these systems? Like really, please tell me when you are on the road and where so I can avoid you at all costs. I'll admit the self parking feature which works in parallel and conventional perpendicular parking is a cool feature, but I can park way faster without it, heck by the time it recognizes a spot as you drive by I'll drive up behind you and fill the spot.

Other features you typically only see on more upscale brands are things like power adjustable steering wheel and convenience entry / exit -- where the seat and wheel extend away to make ingress / egress easier.

The button layout on the dash is very intuitive and everything (except the heated steering wheel) that you would need at a quick push is easily accessible with a hard button, the rest is controlled through the responsive and very bright touchscreen.

As for interior space, the rear seats fold 60/40 and nearly flat and when you open the hatch you are presented with a rather large cargo area without giving up too much rear leg room. The missing cargo cover in a vehicle at this price bothers me, but that's just one of my pet peeves. 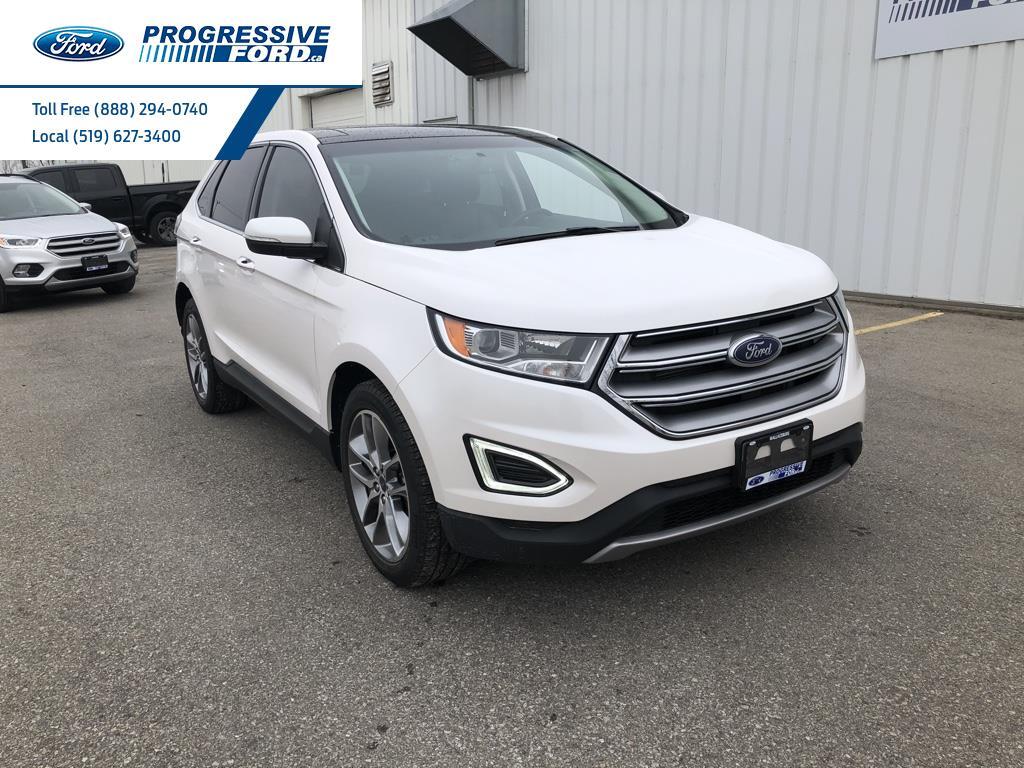 Although I am enjoying the Edge so far this week, it does exhibit a few traits that I'm not really that fond of. The first being the suspension clunk... or should I say bang? It is a little difficult to explain, but on smooth roads it is fine, even on our potholed streets it seems okay but heaven forbid you hit a frost heave or a speed bump because when you do, you are certain the suspension was just dealt a fatal blow.

It is almost like the wheels are so heavy that when the wheels go up over a bump they come crashing down attempting to rip the suspension off its mountings. It is a very unsettling noise and feels horrible -- I'm not talking about doing this at speed either, even crawling over speed bumps in parking lots at slow speed is to be dreaded.

If you ignore that driving trait, which could be hard to ignore depending on your daily commute, the rest of the drive is actually excellent. The Edge is dead silent -- seriously, there is no road noise, no wind noise, nothing. It really is a joy to drive on the highway.

The 2.0L EcoBoost engine is a slight letdown in this vehicle, though. It is adequate but not plentiful – the V6 engine is certainly an upgrade in this case, or if you really like the turbo power delivery there is a 2.7-litre V6 EcoBoost also available that would move the weight of this vehicle with a little more authority.

The Edge is surprisingly easy to maneuver around town, it doesn't really feel much larger than an Escape on the outside despite being quite a bit larger on the inside. Parking it is easy (even without using the park assist) and the turning radius is quite good. Visibility is good all around, heck I was even able to back up the old fashioned way without the camera by looking out the back window.

The Edge served me well this week, and I was actually going to use it to pull my trailer out of the yard but decided against it after reading that the tow rating was only 1,588 kg (3500 lb), although I'm sure it would have been fine to just move the trailer in the driveway.

As usual, I did a lot of highway driving this week, but my other half took the Edge on the grocery run and hit at least six different stores, which meant a lot of "stop and go" for the Edge as well. Fuel economy was decent overall at 10.3 L/100 km for the week. I'm not sure the V6 would have been any worse than the little EcoBoost 2.0-litre, but it should at least offer a bit more oomph.

If I was shopping in the mid-size five-seat SUV category, the Edge would most certainly be on my list of vehicles to test. I do wonder about the harsh suspension; perhaps smaller wheels on the lower trim lines would make a difference in that regard. I do like the space, comfort and size of the Edge, it's just right in terms of exterior vs interior dimensions and it also hits that sweet spot between truck and car.