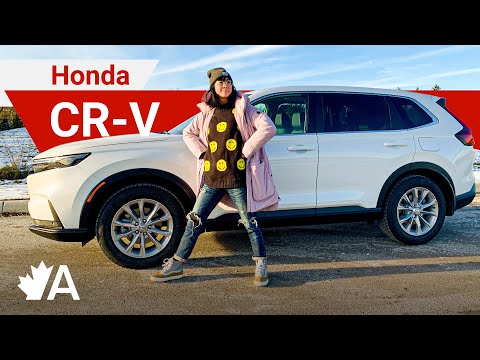 Always practical and easy to use, the redesigned CR-V now adds style to its repertoire.
Pros
Cons
Advertisement

Always practical and easy to use, the redesigned CR-V now adds style to its repertoire.
Pros
Cons

The CR-V is Honda’s best-selling SUV, so it was vital to the brand’s bottom line that designers and engineers nailed this new sixth-generation model.

Rather than doing something dramatically different, the 2023 Honda CR-V has been updated in tangible ways to give people more of what they already know and love.

The most significant changes to the new CR-V are in the styling department. It has a clean, smart, and inoffensive design with good proportions. The previous version was a bit frumpy and overdesigned, but Honda has smoothed out the awkward angles and bulges to create a more modern and streamlined look. Someone mentioned to me during this test that they thought the new CR-V looked like the Mazda CX-5, which is a compliment because that’s a stylish SUV that succeeds in looking more upscale than many of its competitors.

Inside, the CR-V gets a similar interior to what we’ve already seen in the Honda Civic with the unique honeycomb mesh air vents and textured black plastic that hides dust well, and good build quality. It’s quite dark inside and not that flashy, but what it lacks in flash factor it more than makes up for in practicality.

The CR-V has always been a champion of practicality, and that tradition continues with this new model. With 1,113 L of space in the trunk and 2,166 L with the back seats folded down, there’s more cargo room than both the previous CR-V and the rival RAV4 from Toyota offer. There are no longer levers in the trunk to fold the seats down, which means running to each side to use the levers on the seats themselves to stow the 60/40 split-folding bench.

The load floor also isn’t flat; there’s a large hump when the seats are folded, meaning you can’t easily slide cargo inside.And while we’re at it, I’d love it if the tailgate offered hands-free access – a feature that’s only equipped on the range-topping hybrid model.

Despite those minor complaints, the CR-V remains massively utilitarian, with deep door pockets, numerous cubbies for small-item storage, and a huge centre console bin that can hold nine litres of stuff. The doors also open very wide, making loading in kids and installing child seats easier. The doors extend past the rocker panels to keep your pants from getting brushed with salt in the winter.

Considering how large the trunk is, I’m impressed with how much legroom is available to second-row passengers. Even with the front seats positioned all the way back on the rails, there’s still enough room for adults to enter, exit, and sit comfortably.

Like the front seats, the rear outboard seats in this EX-L trim are heated, as is the steering wheel. Unfortunately, rear-seat passengers don’t get USB ports for charging their devices; again, only the topline Touring Hybrid model offers them in the second row.

The driving position and the seats themselves proved to be very comfortable during a trip that included over four hours of driving. Honda says it has engineered the seats to “reduce fatigue and improve posture.”

The Honda CR-V might have one of the most user-friendly and straightforward interiors today. Every function is where you expect it to be, all the buttons are clearly labelled and logically placed, and the touchscreen’s menus are intuitive. The infotainment and climate systems have a proper mix of hard buttons and soft shortcuts, so neither are distracting to use while driving. The graphics on the screen don’t look the freshest, but the layout is logical and makes it easy to complete a task without excess tapping or sorting through menus.

Outward visibility is also excellent, with thin A-pillars, door-mounted side mirrors, and large windows, but the reverse camera distorts the image you see and takes a bit of getting used to.

The CR-V locks itself as you walk away with the key in your pocket, a simple feature that’s much appreciated.

The 2023 Honda CR-V is powered by a turbocharged 1.5L four-cylinder engine that carries over from before, with 190 hp and 179 lb-ft of torque. The base model is front-wheel drive, but the rest of the lineup comes standard with all-wheel drive and a continuously variable transmission (CVT).

The previous CR-V was slow and the CVT was noisy; unfortunately, that’s still the case. It’s adequate around town in terms of performance, but if you need to pass someone on the highway, the 80-to-120-km/h move feels like it takes forever and there’s just so much noise from the powertrain. I wish it was quieter and more responsive to reflect how upscale the CR-V now feels otherwise.

I’d generally be forgiving of slower acceleration and a noisy CVT if it meant increased efficiency, but after about 800 km of testing mainly on highways and in eco mode, the CR-V was returning an average fuel economy of 9.1 L/100 km. Even when you account for the freezing temperatures and the fact this tester was on winter tires, that’s notably worse than the official combined rating of 8.4 L/100 km (9.1 city, 7.6 highway). Of course, there’s a hybrid model that sits atop the CR-V lineup if you’re seeking better efficiency.

Honda is quick to call the CR-V sporty, and while I think that’s a bit of a stretch, the drive does feel comfortable and well-sorted. The steering feels tight, there’s not too much body movement, and the suspension soaks up rough roads and bumps in the road decently. There’s now a hill descent control mode and a driving mode specifically designed for snow. Even during a snowfall, the CR-V felt composed and confident, and it’s easy to park and manoeuvre through tight areas. Other than the noisy and slow-to-respond CVT, the rest of the driving experience is solid. The previous CR-V’s sensors were overly sensitive and would think I was in constant danger even when no real threat existed. They were so annoying that I’d turn them off, rendering them useless. Honda has recalibrated the sensors this time around so they’re actually helpful, and everything works as it should.

The Honda CR-V EX-L has everything you need and nothing you don’t. Not known for extra frills, the CR-V remains as utilitarian as ever, focusing on ease of use instead of gimmicks. While this would be forgivable at a lower price, the CR-V (especially the Touring Hybrid model) is now priced at a level where drivers would be correct to expect some tech to get excited about.

Wireless phone charging and wireless Android Auto and Apple CarPlay are included in this EX-L model, but you need a wired connection in lower trims. It’s well integrated, however, and when you’re using Google Maps, directions are shown in the digital gauge cluster. This is helpful so drivers don’t always have to toggle between screens, a great feature if you’re both constantly lost and a serial song or radio station flipper like me.

The base front-wheel-drive 2023 Honda CR-V starts at $36,740, which includes a $1,950 destination fee that can’t be negotiated. This model has the most value because of all the standard safety equipment. The EX-L tested here is $45,340, while the top-of-the-line Touring Hybrid model is $50,840. The Honda CR-V is more expensive across the lineup than the Toyota RAV4 and Hyundai Tucson, but without offering more features or luxury to justify the added expense. The Touring Hybrid model’s price seems especially steep when you consider it’s about the starting price for a Mercedes-Benz GLB-Class, although that doesn’t include many of the features found here – especially the advanced safety stuff.

The 2023 Honda CR-V should be an easy choice for anyone who prioritizes practicality and ease of use. Although those aren’t the most exciting qualities for an SUV to have, and the CR-V isn’t doing anything truly segment-leading, it’s a well-rounded vehicle with no deal-breakers that’s very easy to live with on a day-to-day basis. It’s familiar, straightforward, and offers a certain honesty that’s refreshing. And there’s another bonus: the CR-V is built locally in Alliston, Ont., for the Canadian market.