Goof of the Month: You Need a Mechanic Welcome to Stories of the Mechanically Declined! Every month, we ask for stories from our pals in the automotive service industry, which highlight the need for drivers to understand their vehicle, how to maintain it, how not to maintain it, and how it works.

This month’s story comes to us from John Kennard, an automotive technician in Mississauga, Ontario, who recently worked on a Honda Pilot. The unit had been dropped off by a tow truck at his shop with a badly damaged front suspension, and a wheel with a fist-sized hole through it.

The Pilot in question arrived after a front ball joint failed and separated, allowing the front suspension on one side to collapse, driving the broken control arm up and into the vehicle’s wheel, and punching a hole through it. The tire on that wheel, and some nearby parts, were also damaged.

After a little questioning, Kennard determined that the customer had been driving this first-generation Honda Pilot for several years. It had never been to Kennard’s shop, and as it turns out, hadn’t been seen by any other mechanic in well over a year, either.

“We like to have a relationship with our customers, because we sell vehicles here, and service them here too,” Kennard explains. “We have many regulars, but this was a new customer, with a serious problem, so I asked a few questions. The owner had been driving this Pilot for several years, but hadn’t had it into a mechanic for quite some time. He just had the oil changed regularly at the local quick lube shop, and that’s pretty much all this vehicle had ever seen in terms of maintenance or inspection.

“Hondas are reliable, sure. And there’s a saying that you just change the oil and drive them and that’s it. Well, here’s proof that this isn’t necessarily true.” 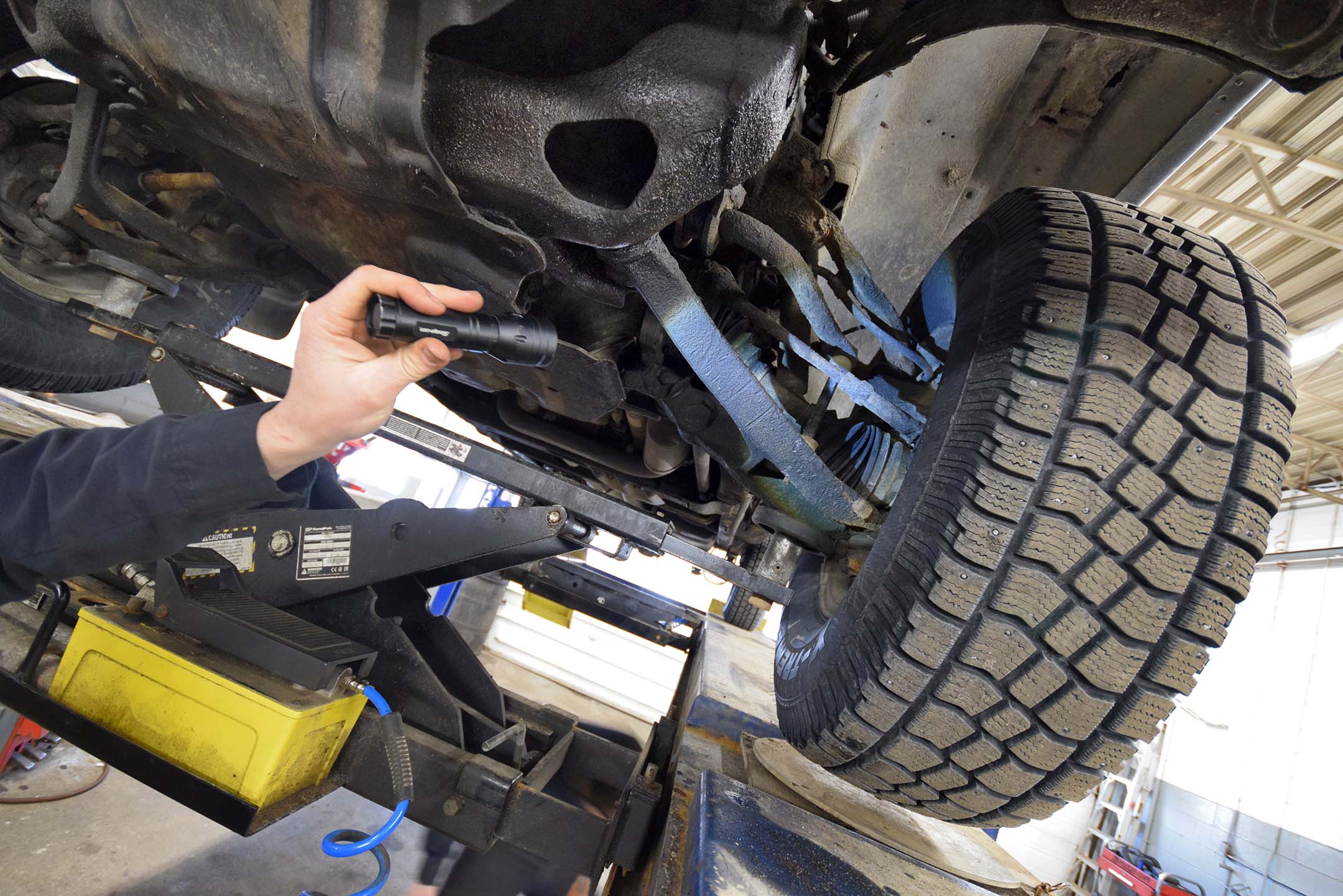 The local quick lube shop used by Kennard’s customer completes an inspection with each oil change, and even gives the shopper a printed checklist of the inspected items. But Kennard debates the quality of that inspection.

“The big issue for me, and the cause of this problem, was the suspension check – and specifically, the ball joints. One of those ball joints is what let go in this case and made a mess. Thankfully, it didn’t cause an accident,” he says.

The root of the problem? To properly inspect the condition of a ball joint in many vehicles, the vehicle needs to be hoisted up into the air, taking the weight off of the suspension and wheels. But the lube shop in question, and many like it, only have a pit – where the car drives over for its oil change.

“So, they say they’ve inspected the ball joint, and even give this customer checklist after checklist indicating that his ball joint(s) are ok – but the thing is, they never inspected the ball joint properly, since the vehicle was never lifted off of the ground. This shop has no hoist, only a pit. And you can’t properly check the ball joints in a vehicle like this if its wheels are on the ground. The ball joint inspection wasn’t worth the paper it was printed on – end of story. A licensed technician knows this, which leads me to think the individuals making this assessment were not, in fact, qualified,” Kennard says.

After thousands of kilometres of believing the part (and his vehicle) to be sound, the customer wound up suffering a surprise ball-joint separation.

“This ball joint would have been in poor shape for quite some time,” Kennard adds. “It was almost completely disintegrated. I bet I could have called it for replacement months and months ago.”

The customer admitted to hearing a loud clunking sound for some time before the ball joint failed, but said he figured it was a loose exhaust system part, and dismissed it.

“This is another scary thing,” Kennard says. “Even minor noises can sometimes have serious causes. You always want to make sure. I could have figured out, in a few minutes, that the sound the driver heard was the ball joint asking to be replaced.”

Kennard changed the customer’s front ball joints, after a full (and proper) suspension inspection revealed that the ball joint which hadn’t failed was in very poor shape too. The customer was also on the hook for the replacement cost of a new wheel from a recycler, and two new tires.

The bill was nearly $1,600 in total, though it could have been much less expensive.

“If this vehicle had been inspected properly, the customer would have been on the hook for the two replacement ball joints, and that’s about it,” Kennard commented. “Plus they wouldn’t have been in danger of losing control, or having an accident, for months, while driving around on a badly worn suspension. Ignoring the clunks and failing to have the vehicle inspected properly cost this customer a lot of extra money. But the bigger story is the safety issue: running a suspension this beat up, the vehicle was a rolling accident waiting to happen, plain and simple.”

Two lessons are worth noting in this story. As we’ve said before, and will again: healthy vehicles don’t make unwanted or unusual sounds, and any such noises should be professionally inspected.

“The sound might be a loose exhaust heat shield, or it could be your front suspension about to let go and cause an accident,” Kennard says. “You’re always better off knowing.”

The second lesson? Most quick lube shops are not automotive service centres, even if they can change your air filter, wipers, tires or belts. Thousands of Canadians use quick lube shops every day with no issue – but a regular visit to a mechanic, even once a year, remains a great idea.

“Vehicles are machines made of parts that can wear out and break,” Kennard says. “Assuming your ride just needs oil changes to keep it ticking, and that’s it, is a good way to have a nasty surprise, like this customer. And though many quick lube shops are reputable, I have a serious problem with the ones that advise customers that ball joints are in good shape, without the ability to lift the vehicle from the ground to check them properly. Customers should take these checklists with a grain of salt, and have their vehicle inspected by a professional, at least once a year, to avoid issues like this. You’ll be driving a safer vehicle, and could save money too.”