Goof of the Month: Change Your Plugs or Pay This month’s story comes to us from a service advisor at a German luxury car dealer who prefers to remain anonymous. It reinforces the importance of adhering to your ride’s factory-prescribed maintenance intervals, and especially if you’ve got a newer, high-tech vehicle with precision systems at work within its engine.

The service advisor (let’s call him ‘Wilson’) explained about a customer who was experiencing multiple issues, including poor performance and mileage, and wound up with a fairly hefty repair bill – all because he took his newer vehicle’s maintenance schedule to be a suggestion, not a requirement.

The subject of our story could have, literally, saved thousands of dollars by adhering to the factory-prescribed spark plug change intervals. Instead, by skipping his spark plug maintenance several times over he experienced months of poor fuel mileage and performance as well as cascading problems throughout his engine which led to a considerable repair bill.

Wilson explained that he had a regular customer arrive at the service centre with his newer, high-mileage sedan, complaining of poor performance and poor mileage that had been present for months. More recently, a Check Engine light finally pushed the customer to visit the dealership.

“This customer had been ignoring some trouble signs for a while,” Wilson said. “He travels a lot for work, and he’s a higher-mileage driver. A busy gentleman – who has been a customer of ours for a while.”

After listening to the customer’s complaints, Wilson looked up the vehicle in his computer system. The car was a little overdue for an oil change, but the real cause of the problem was that its V8 engine was also massively overdue for a new set of spark plugs.

“This customer had driven nearly 100,000 kilometres past the spark plug change interval for this engine. That’s massive. In this engine, the spark plug change intervals are relatively frequent, compared to some cars. In this customer’s case, he was approaching the mileage where he should have been booking an appointment to have his third set of plugs installed, though he was still running original plugs.”

Modern engines are engineered with a very specific combustion process, and the spark plugs are the most important part of that process. Modern engines can’t be as efficient and powerful as they are if the combustion environment isn’t very precisely controlled. When a driver chooses to ignore spark plug change intervals, that combustion environment rapidly deteriorates – leading to degradation of performance and mileage, as well as other issues. 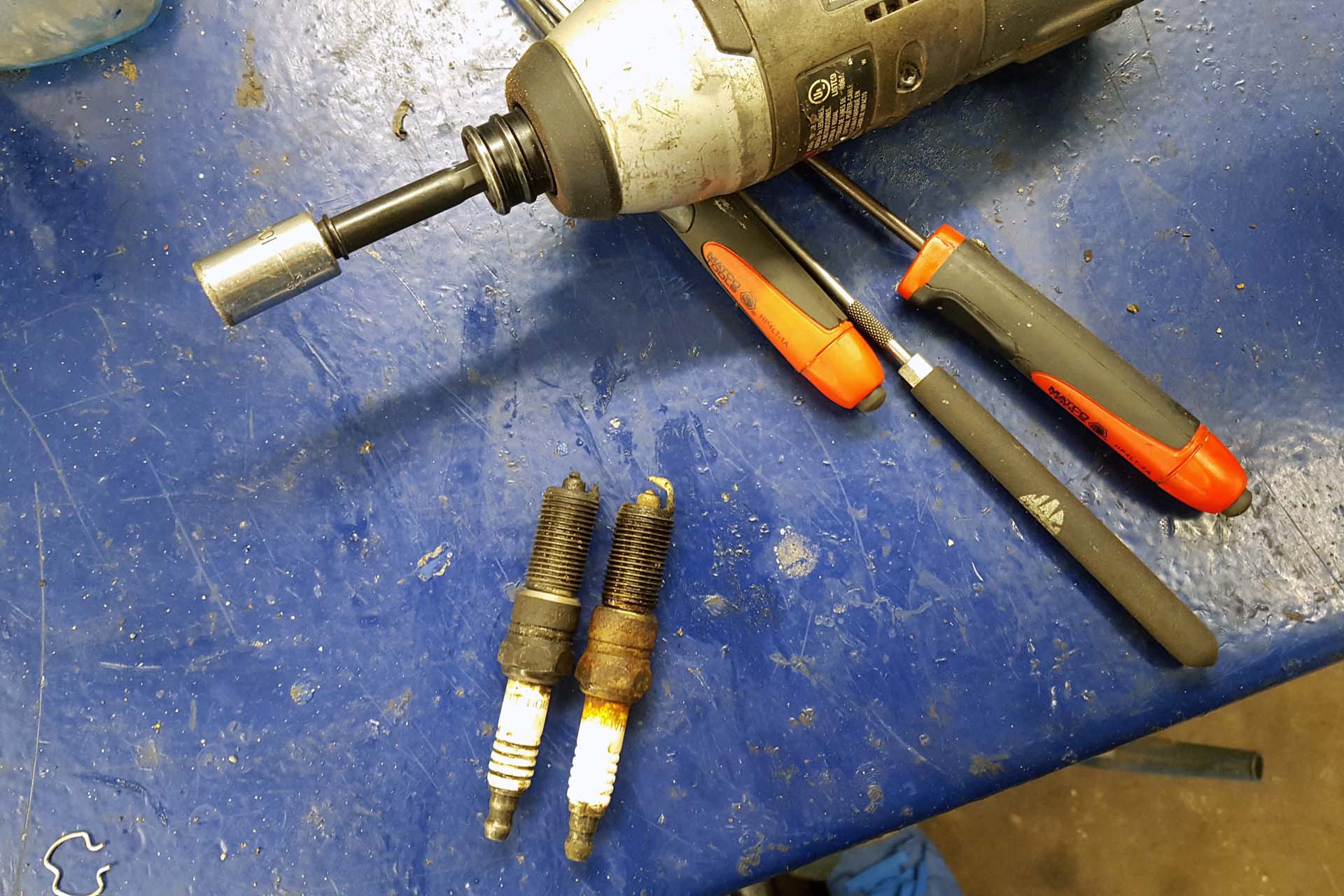 “This customer’s engine, and many modern, high-efficiency, direct-injected engines like it, have precise maintenance requirements that absolutely need to be followed. They’re not suggestions,” Wilson remarked.

“When spark plugs age, they get dirty, and don’t fire properly. Years ago, you could get away with extending a plug change with little issue. Today, running fresh, clean plugs is extremely important, and especially on engines like this one.”

That’s because a set of old spark plugs can quickly cause issues with other engine systems. In this case, they fouled up, causing the resistance across the plug and electrode to change. This causes hot spots, which accelerate the formation of additional dirt and gunk, which further speeds plug degradation, thereby causing more hot-spots, and reducing performance. It’s a rapid downward spiral.

But that’s only the start.

With dirty plugs, the engine’s ignition system, and in particular, its coil packs, need to work harder to achieve a spark. This causes the ignition coils to consistently work at a higher temperature, which wears them out faster.

Before long, you’ve got bad ignition coils firing dirty spark plugs. Bad fuel mileage and poor performance aside, this condition also drastically reduces the engine’s ability to run properly, and will eventually result in a misfire. Misfire conditions cause ‘dirty’ combustion, which can rapidly increase the production of harmful valve gunk, slash away at engine performance and efficiency, and even damage fuel injectors.

“We actually found five of the eight fuel injectors in this customer’s engine to be leaking,” said Wilson. “Presumably, they’d been damaged by repeated exposure to misfire events. Injectors are highly sensitive and precise components, and they should last the life of the vehicle. But they’re not designed to be exposed to repeated misfires. That’s one reason why cars have a ‘Check Engine’ light, but the customer ignored that for a while too.”

With leaky fuel injectors added to the equation, the combustion environment in this customer’s engine was absolutely mucked.

“This is one of those great examples of why you should stick to your maintenance schedule,” Wilson comments. “Installing new plugs to this engine is a minor job that costs, maybe, a few hundred dollars. Ignoring it quickly inflated that repair bill by seven or eight times.”

Highly paid engineers devise service intervals for parts like spark plugs to help drivers experience maximum efficiency and performance from their engines, not because they’re bored. The service schedule in your ride’s owner’s manual, whether a luxury car, a pickup, or an economy compact, shouldn’t be taken as a suggestion. Stick to it, and you’ll experience the mileage and performance your ride was built to deliver for years to come. Ignore it and it could cost you thousands.