You know that old proverb. Maybe it even applies to you – after all, if your day entails slinging skids of building supplies around at the Home Despot (sic) – who the heck wants to come home and tackle that half-finished rec room project, even if it has taken the better part of a year? And I'll bet the last thing a tired chef wants to do at the end of the day is prepare dinner for the family.

While I'd like to say it's an adage that applies to most of us in the car-writing business, if I had to be completely honest, that's not exactly true. I know several folks who somehow balance work and travel and yet still manage to build their race car, or finish that classic restoration.

Maybe they're better organized, have deeper pockets, or just have a lot more talent than I do because my long-neglected project car is my dirty little secret. 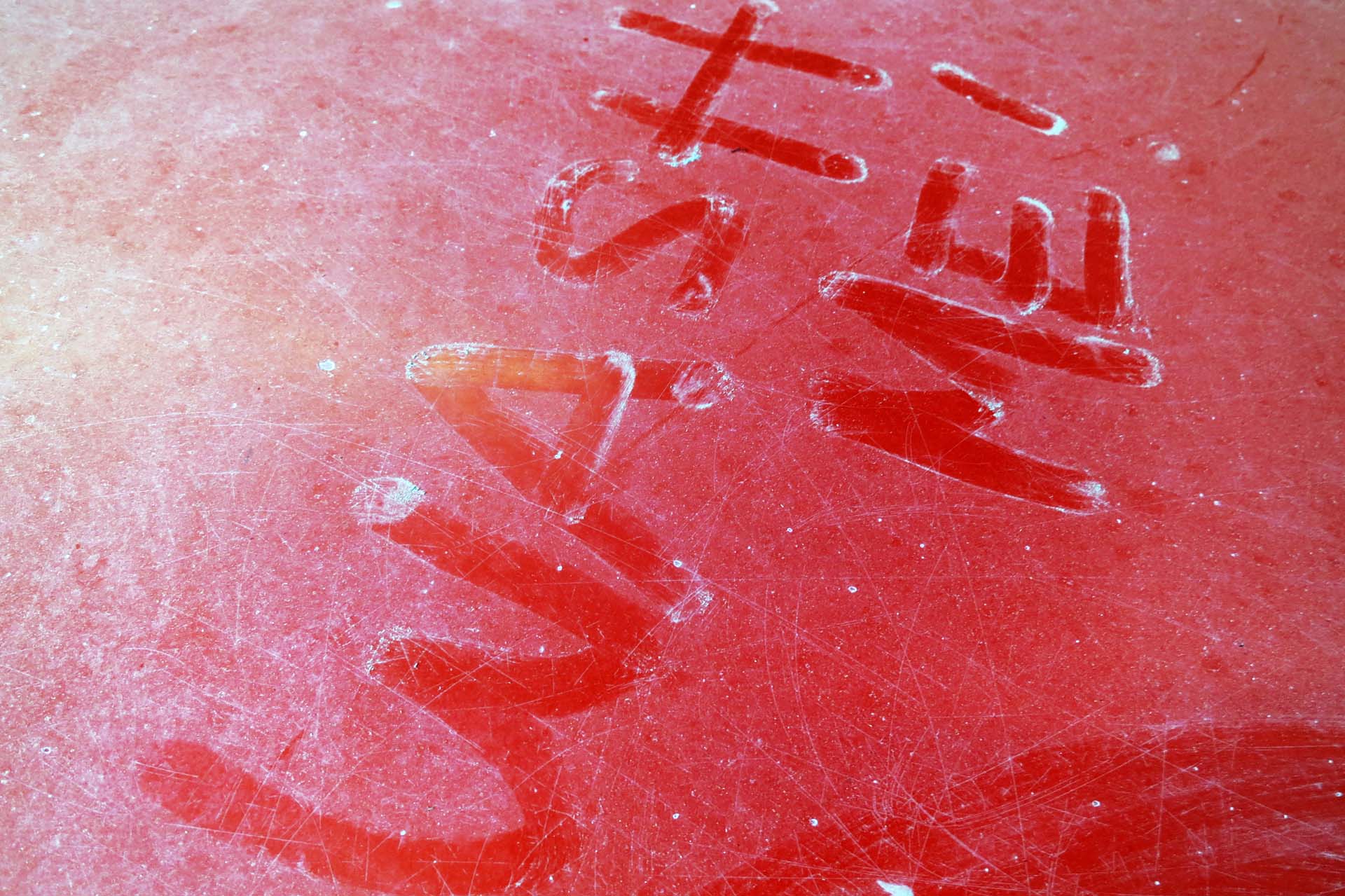 It's been seven years since I brought home a 1992 Mazda MX-3 with the intent to turn it into a fair-weather daily and occasional track car. I've always liked the nimble handling and rather unique design of the odd little coupe, and finding a fairly low-mileage example that hadn't been bastardized by a fast n' furious twenty year old was akin to finding a full set of teeth at a Westboro Baptist protest.

Out came the car's stock 1.8L V6, a smooth but underpowered little engine, to make way for a Japanese import with 200 hp. And then came life and work and an endless stream of other responsibilities and before I knew it, six years had passed and my project was languishing beneath layers of dust and built up grime.

But this year I resolved to get this project rolling again – and the first step was cleaning up the residue of all those years of neglect.

What better way to evaluate a selection of detailing products supplied to us for review, than to offer them up this challenge? 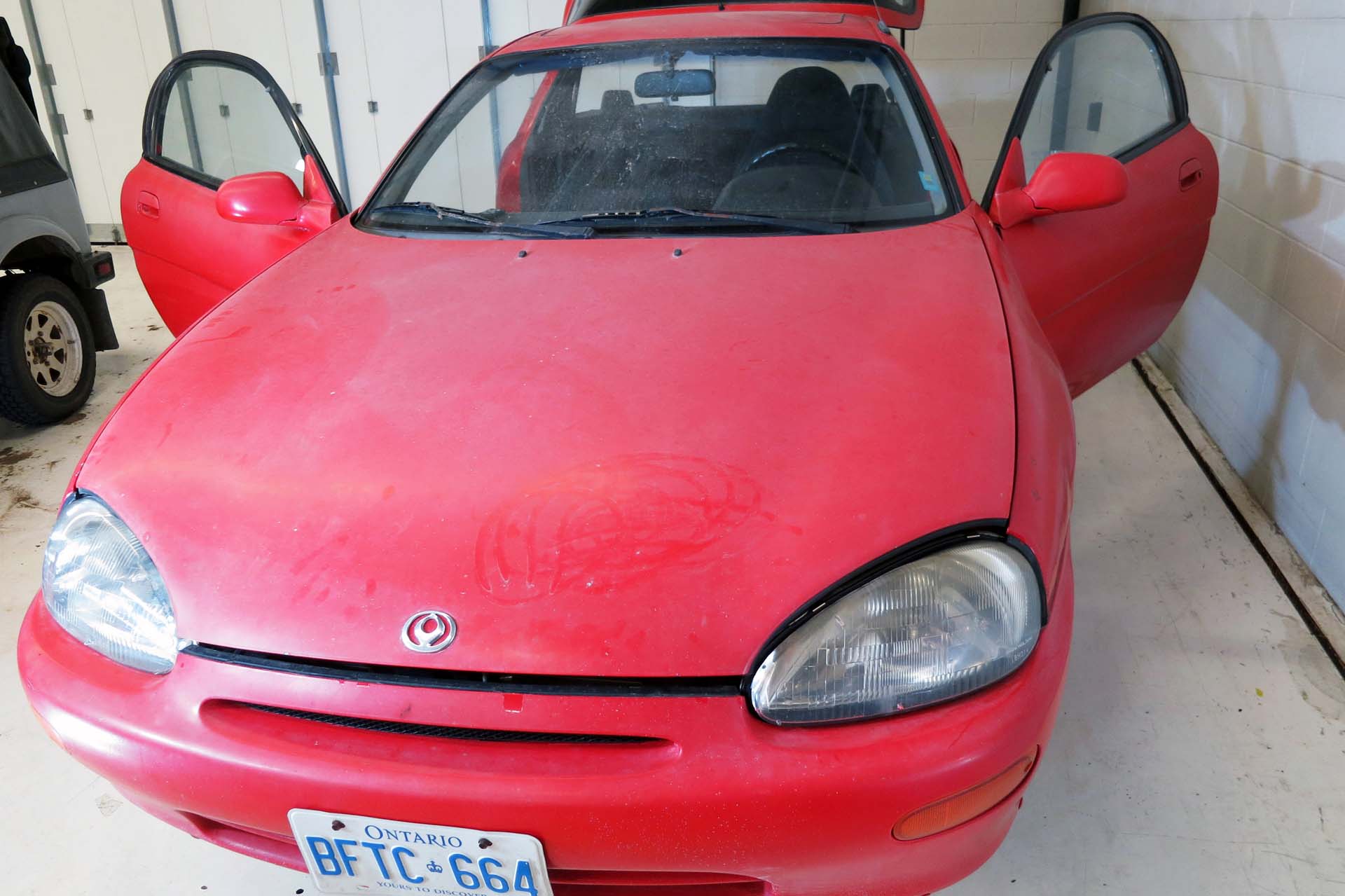 This is a proper car shampoo, meant for the regularly scheduled maintenance of your car's paint. According to Meguiar's website, dirt and sun are paint's worst enemies and they recommend washing every couple of weeks to remove any surface dirt.

I have to admit, I've been guilty of using dish soap in the past. While it's great for removing grease and dirt, detergent isn't ideal for a well-maintained finish, because it destroys the wax. Detergents contain "surfactants" – compounds that reduce the surface tension between oil and liquid, or liquid and solid, enabling them to cut through grease, dirt, and wax.

A good car shampoo is not only safe for wax, but contains lubricants that prevent scratching, and helps the water to run off in sheets, rather than pool and create spots.

A luxuriant shampoo should help the wash mitt or sponge to glide across the paint surface, rather than cause any friction.

An ounce of Gold Class Car Wash added to a bucket of water produces plenty of thick, creamy foam. It certainly feels luxurious and smells great. All of the dust and dirt build-up on the car's surface was easily washed away. It was nice to some semblance of red start to emerge, as soaps and suds were washed away. 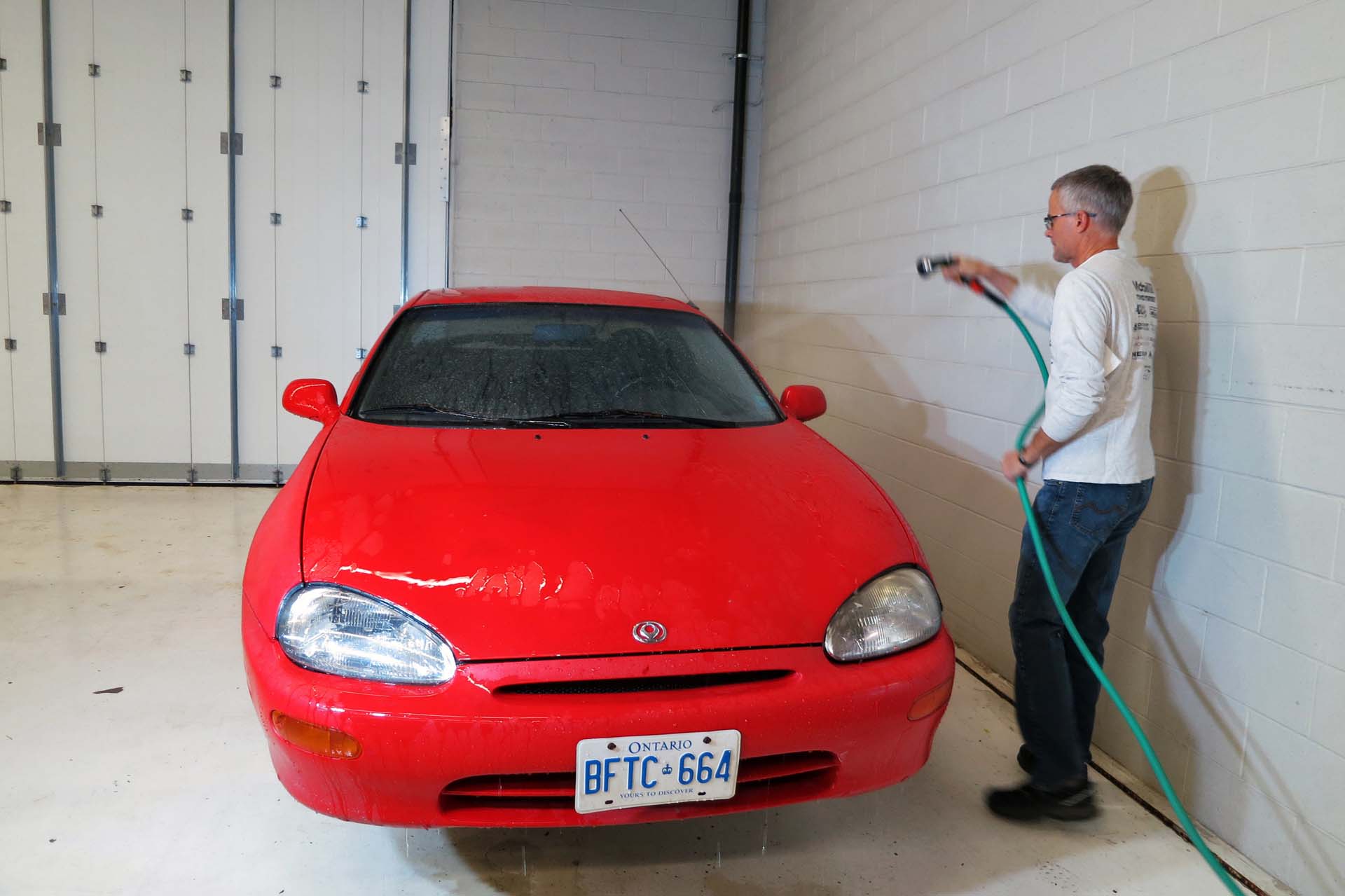 In this case, I could have gotten away with any sort of detergent because not only was the car's finish suffering from years of build-up, the paint was in very poor condition as well. Twenty-five years of contaminants and environmental abuse had completely stripped the clear coat, leaving behind a dull matte finish. Obviously, the best solution is new paint, but for now I'll settle for squeaky clean.

It was impossible to evaluate the product's ability to create a lustrous shine on my car, but the majority of online users on several review sites and forums give it four, to four and half stars out of five.

Mothers Ultimate Wax System is a three-step system consisting of a Pre-Wax Cleaner, a Sealer and Glaze and finally, a Carnauba Wax system. While we were supplied with the first step to review, I decided to go ahead and complete the three steps, since my detail kit already included the rest of the Mothers system.

Pure Polish deep cleans by removing old wax, oxidation, dirt and stains. It's an abrasive, so Mothers recommends you only use it one-two times a year.

I used a buffer with a pad to apply the wax evenly, and once the entire surface was covered thoroughly, buffed it again with a clean pad. The amount of dirt lifted off was impressive, when you consider that he car had been thoroughly shampooed. The first buffing pad was stained pink with oxidized paint residue.

Micro Polishing Glaze is the next step. It contains a very fine polish to remove swirls and scratches, and lubricants to deepen the paint's colour and lustre. As before, I used a buffer to apply the liquid, and a clean pad to remove it. It works really well – I could immediately see an improvement in the paint's surface, and its original deep rich red colour was beginning to return. 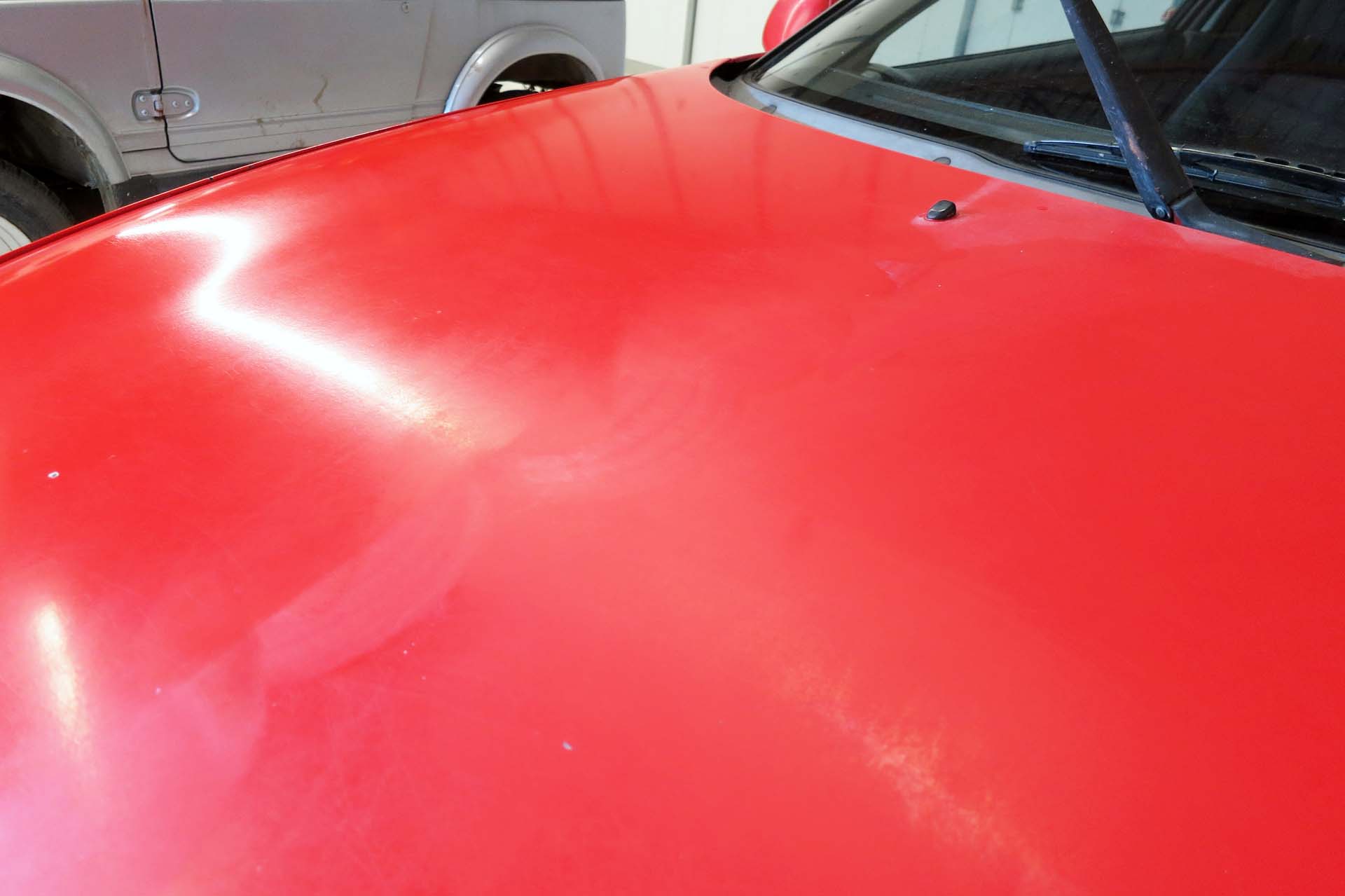 If the entire three-step system had come as a complete kit, the final step would be Liquid Brazilian Carnauba Wax. No problem, I already had a tin of the same product, in paste form.

The third phase of the process is non-abrasive and works to protect the paint and deliver a long-lasting shine. A couple of coats are recommended for extra protection.

I used an applicator pad to apply the wax, and a soft terry cloth to buff it. I must say – these products smell absolutely fantastic, a mild scent not unlike tropical fruit and bubblegum.

After using a clean microfiber cloth for a final polish, I must say the results were impressive. I had trouble lining up the products for a photograph, since they kept sliding off the hood. If this system can impart some semblance of a shine to paint this poor, imagine what it could do with paint that's been maintained. Import forums, and various online reviewers rave about Mothers Ultimate Wax System, with most awarding it five stars. 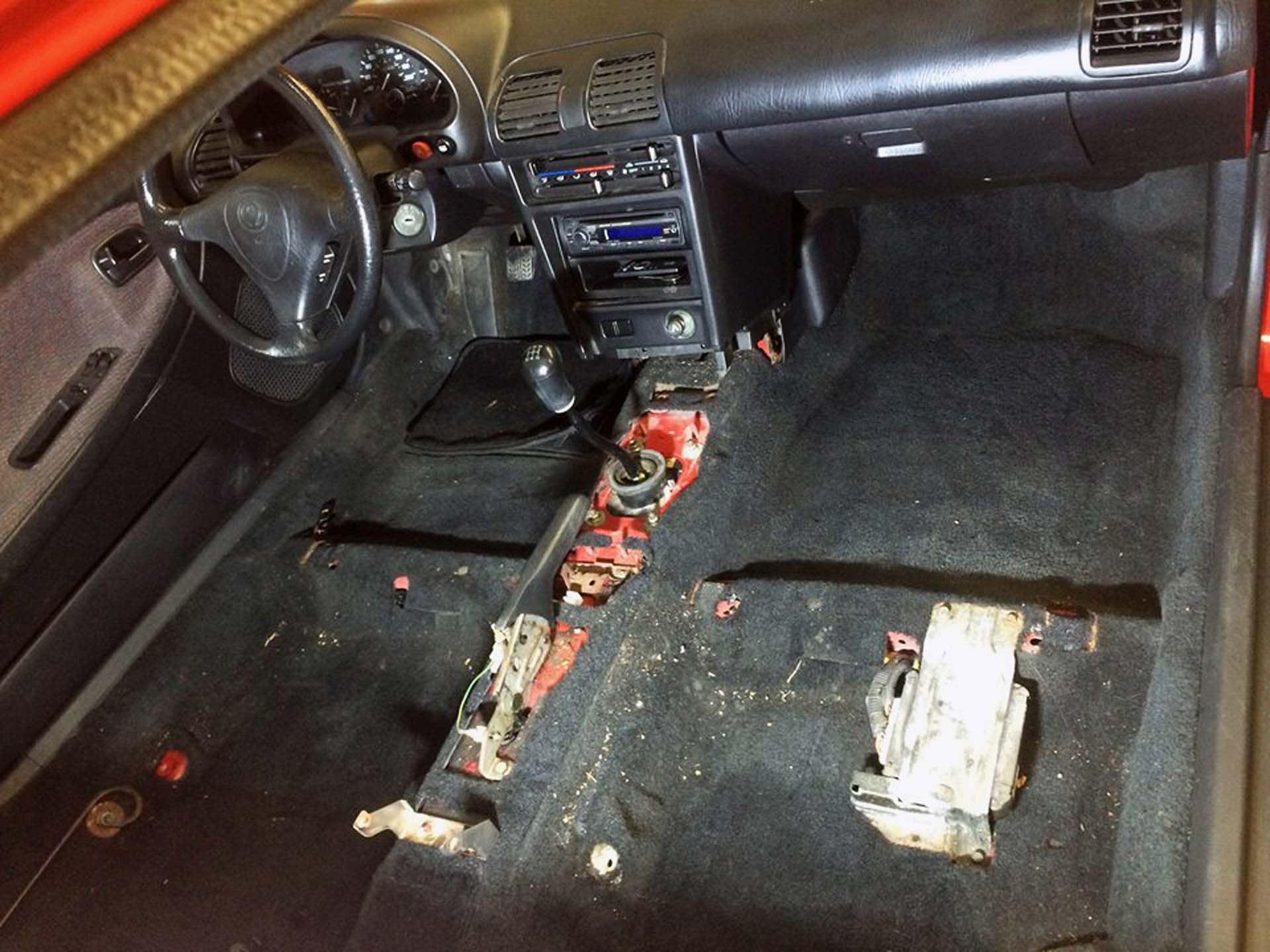 Aesthetically speaking, the carpet was one of the least attractive features of this 25 year old vehicle. And of course, being black, it seemed to attract dirt and lint like filings to a magnet.

Fortunately, the previous owner of my car didn't drive it in the winter. While there was an abundance of filth ground into the carpet, at least there was no salt damage and the stains were minimal.

After removing the seats, I tried a test application of Simoniz's Upholstery and Carpet cleaner, which produces a thick, shaving-cream like lather. The scrub brush attachment helps to work it into the carpet pile for deep cleaning.

However, while it's great for spot cleaning, I wouldn't recommend using it for large areas such as the car's entire floor. First of all, it's a laborious process for such a relatively small applicator. Then there's the smell. 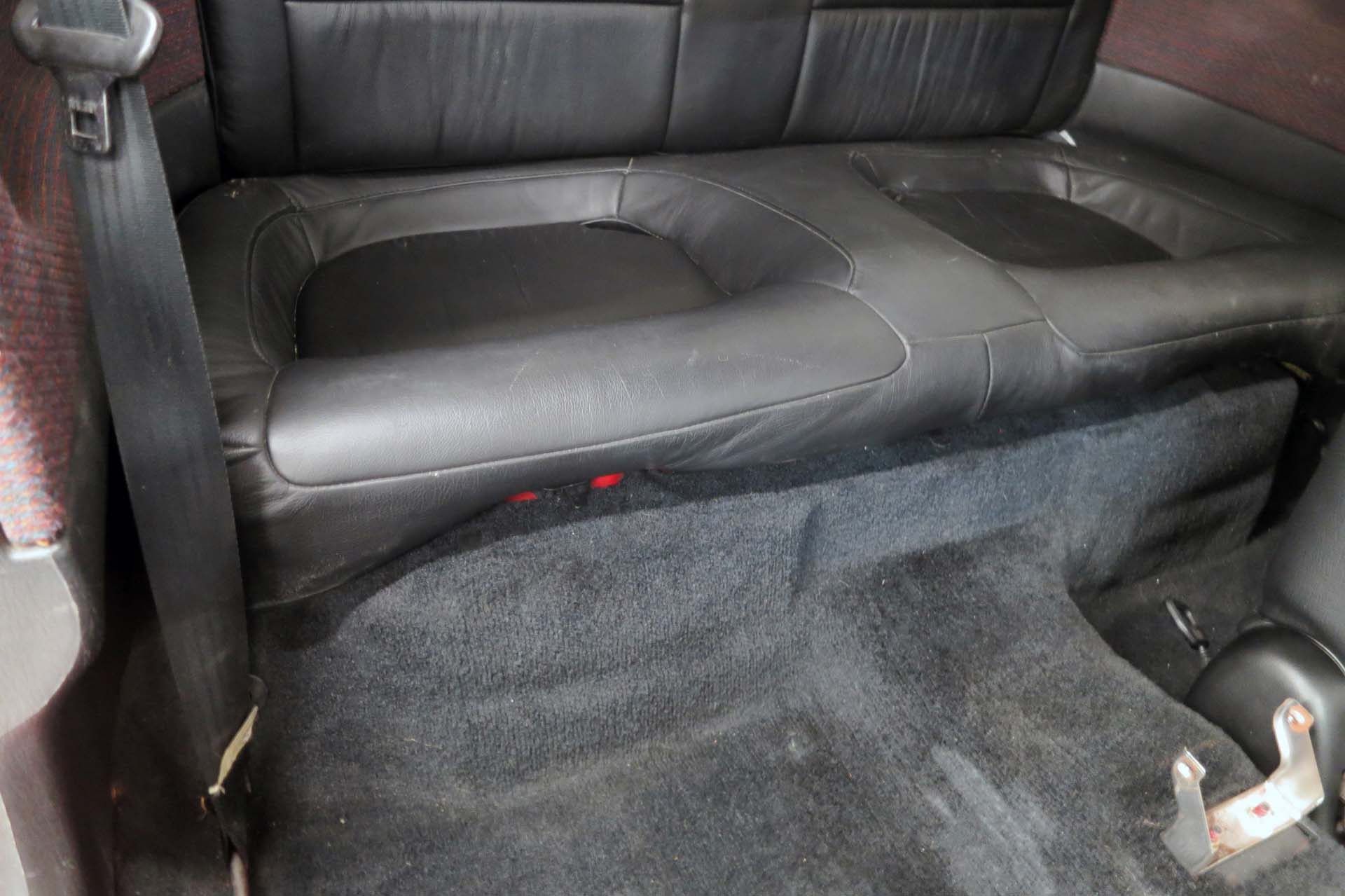 For a product that's meant to be used in an enclosed space, it's surprising that it's so strongly scented – those who are sensitive to perfumes will find it nearly intolerable.

Instead, I opted to steam clean the remainder of the carpet using a Swish carpet cleaner.

The custom MX-3 mats were treated with the Simoniz spray, sponged clean to remove residue (and smell), then aired out. The results were good; the dull, flattened pile of the carpet regained its springiness and deep black clarity, and most of the stains came out of the white stitching.

Overall, most customer reviews give it a 3 or 4 out of 5. While I wouldn't recommend it for a big cleaning job, it's a good product to keep around for tackling spills and spot cleaning. And hopefully they'll introduce a scent-free version.

I was really interested in trying this product since I'd been using Meguiar's Back to Black, and while it worked well enough, the effects never lasted and were usually gone by one wash.

Most of the exterior plastic trim on my project car had faded to dull grey from UV exposure. I applied a liberal amount and was really pleased to see that even the worst of the bleached-out plastic was restored to black. While I can't disprove Armor All's claims that this product will last 100 washes yet, I took to the inter webs to see how other users have fared after repeated washings.

Jeep users in the arid Southwest thought it worked great on their vinyl fenders, standing up to the broiling sun better than Back to Black, while an online forum devoted to Colorado 4x4s liked that it provided a deeper black than some of its competitors.

The overall consensus among users is that it’s a product that works as it claims, while lasting up to several months before requiring another application.