Trade your igloo for donuts.
Advertisement

Trade your igloo for donuts.

Notre Dame de la Merci, Quebec - It wasn’t until I stopped the Cayman GTS at the starting line that I noticed it: a wooden cooking spoon sticking out the top of the track marshal’s jacket pocket.

“How odd,” I thought, pondering the utensil’s purpose well after lunch had been served to us at Porsche’s Camp4. But before more mind could be paid to it, the two-way radio in the car announced my turn to do a lap.

Off I go, doing my best to manage my enthusiasm and the rear wheels of the Cayman as the jigged laterally, scrambling for grip on the icy track. By this point in the day, my driving peers and I had been through a series of educational – and truly exhilarating – exercises in various current Porsche models, and one thing my instructor had repeated throughout the day was ringing in my ears, “You get no style points for understeer!” 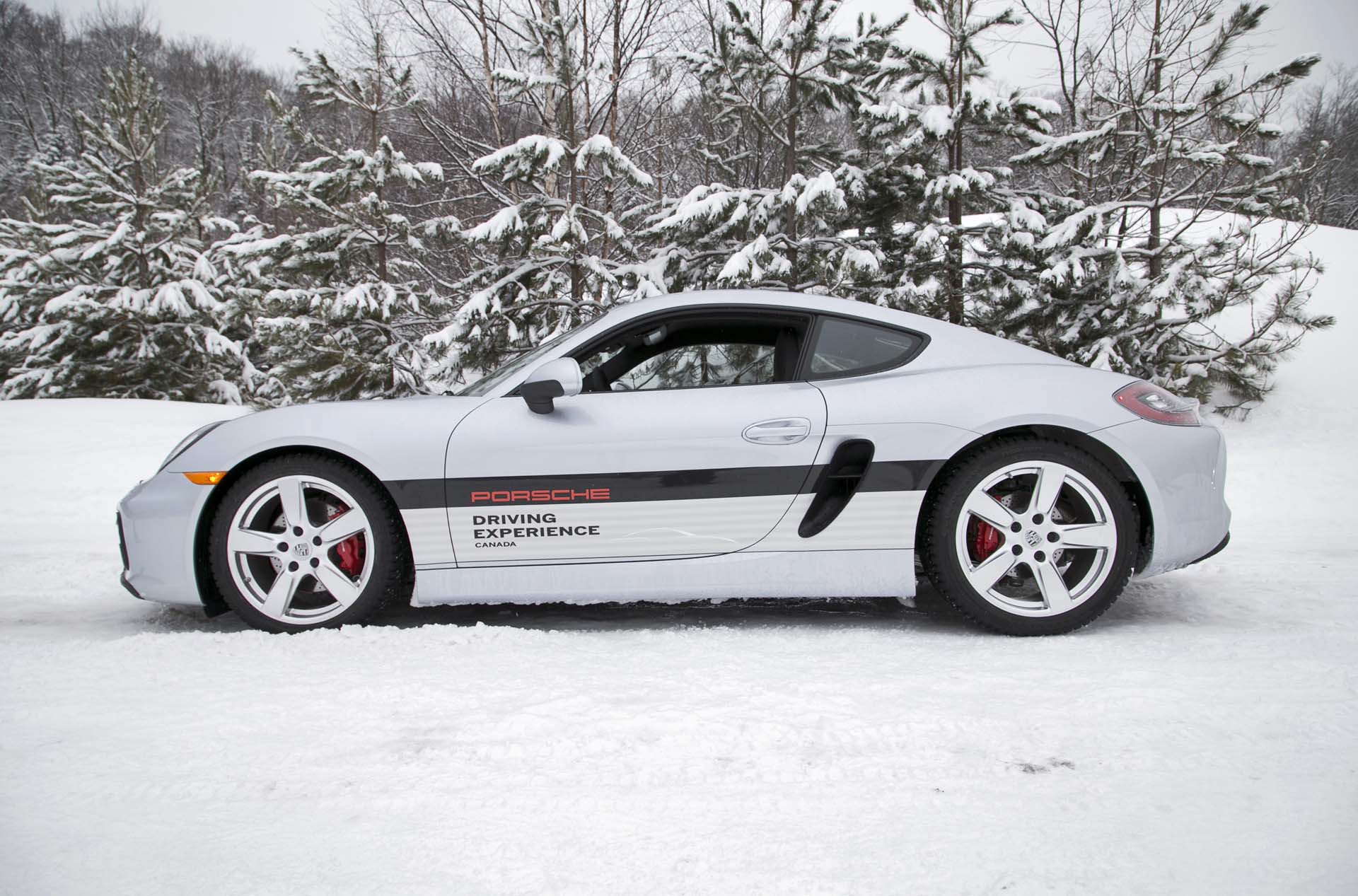 While I fully admit I’m not the world’s best driver, I have done a few advanced driver training courses, spent some time at the track and competed in auto slalom events, so I’d like to believe I’m not a complete lump in the driver’s seat. By this point, entering the slalom exercise, my instructor optimistically hoped that I’d be able to showcase some sort of proficiency at linking together the morning’s lessons. But instead of the desired wistful series of drifts through the slalom, I found myself with octopus arms flailing around trying to keep the mid-engined Porsche balanced on the knife’s edge of spinning out or plowing wide in the embarrassment of understeer.

I managed to do neither this time through – but was critiqued for going too slowly and decided as I entered the back part of the road course, that I’d pick up my pace and have some fun with the Cayman, outside the watchful gaze of my instructors.

And that’s when it hit me – the snow bank – it simply leapt out in front of the Cayman and got stuck all up in its front intake holes. Pulling back into the queue of Caymans to do another lap, I discovered the purpose of the wooden spoon: to unceremoniously unclog the Porsche’s scoops and vents of hard-packed snow.

Faking my best look of complete and utter shock, I asked aloud, “How’d all that snow get there? Must’ve been the previous driver!” Nobody believed me. 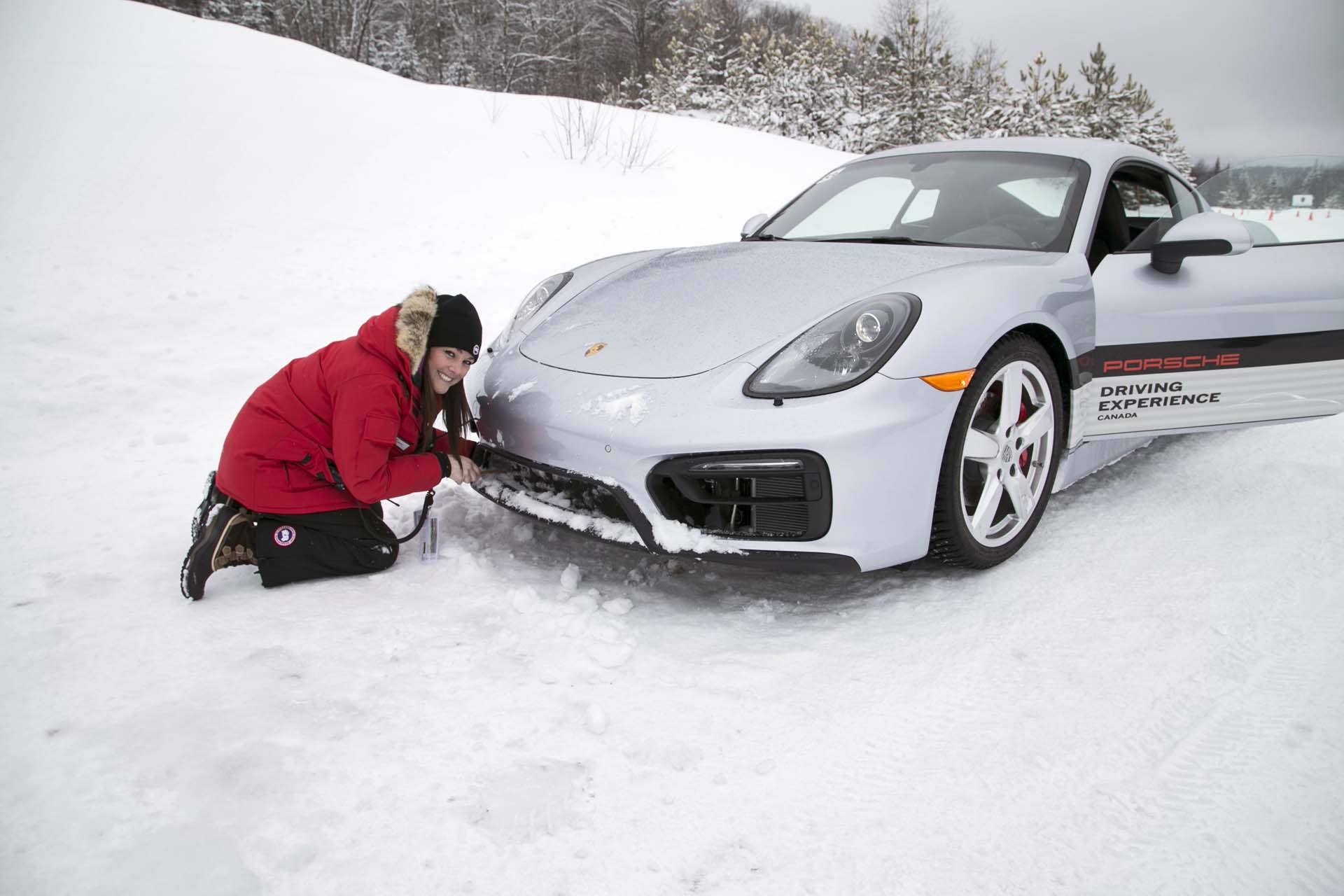 No matter, I certainly wasn’t the only one getting scooped out (or yanked out of snow banks by tow-rope-equipped Cayennes) at Porsche’s Camp4 session, and as long as you’re showing a modicum of care for the cars – and fellow humans – at the track, it’s considered part of the experience and all in good fun.

Porsche’s Camp4 winter driving experience originated in Finland in 1996, having expanded since then to Switzerland, Italy, China and of course Canada as well. 2016 marks the sixth winter the event has been held at Quebec’s Mecaglisse facility that features an ice-covered road course, and a dual, frozen skidpad.

That giant skidpad was probably the most fun part of the day for me. In rear-wheel-drive Porsche 911 Carrera GTS models, we were taught the basics of drift control. Once “mastered”, we played a game of cat-and-mouse with two cars on the skidpad starting opposite each other, and the drivers instructed to catch one another while executing the most flamboyant (but controlled) drifts possible. If this sounds like a ridiculous amount of fun, it truly is.

Camp4 is more than just fun and games. It’s also a great opportunity for Porsche to remind its owners (and would-be owners) that their cars are not just fair-weather friends. For decades Porsche has promoted their machines in all sorts of snowy settings, offering ski racks even for convertible models.

It’s also a great opportunity to showcase the cars’ at-limit handling characteristics in a controlled, safe environment, and at much lower speeds than one would need on pavement. Drivers become more familiar with their cars, and learn better control and moves that could save their hides, or at least let them enjoy winter driving more. 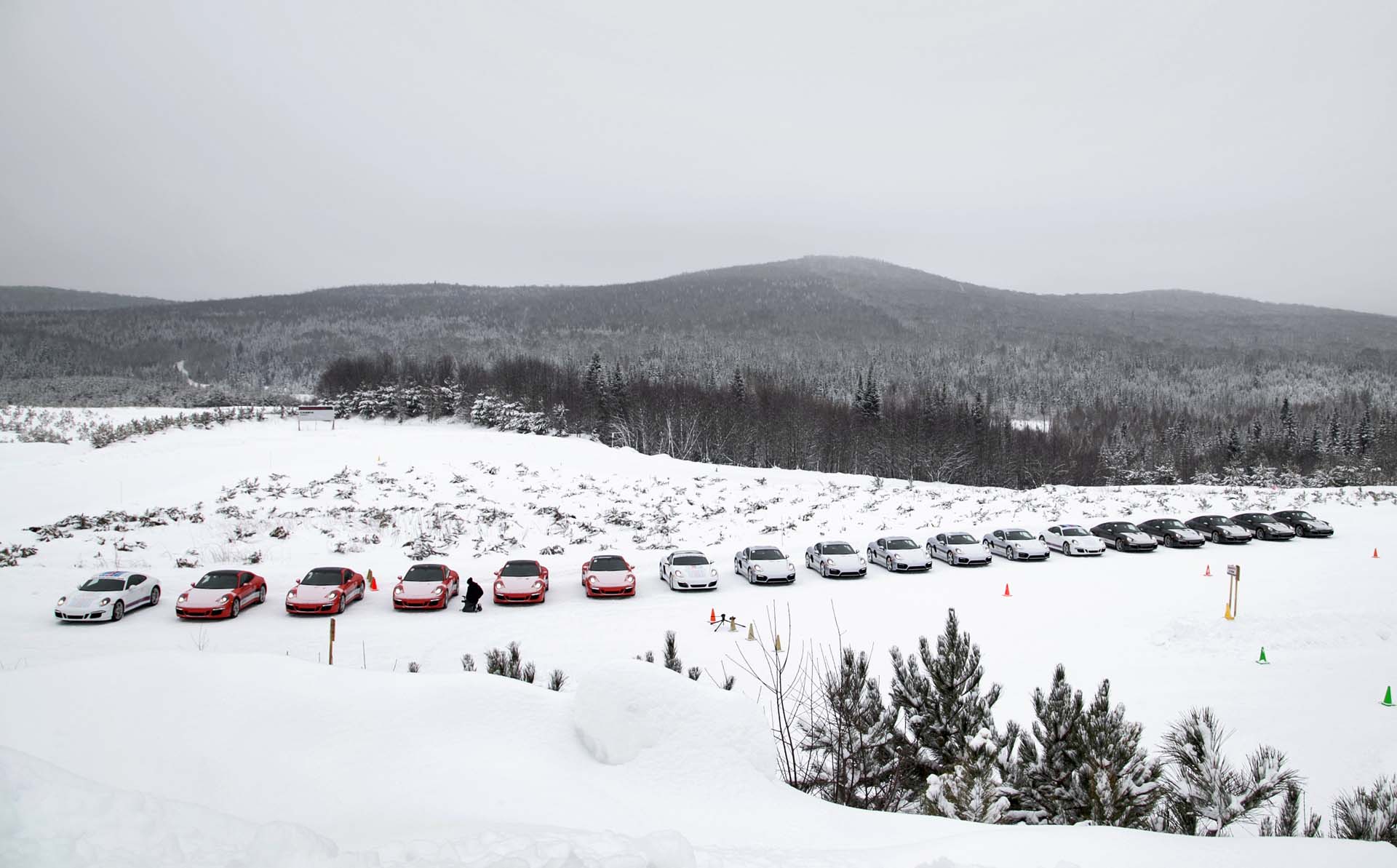 Camp4 Canada starts at $5,295, including three nights’ accommodation at the lovely Estérel Suites & Spa resort, 2 days of driving and all meals. The more advanced Camp4S and Camp4RS include even more driving time and cost $6,495 and $7,495 respectively.

It’s no small sum of money, to be sure, but it’s an exceptional experience, and all the tools are provided for maximum enjoyment – even the wooden spoons.