It was the most unsubtle of beginnings...
Advertisement

It was the most unsubtle of beginnings...

It's best to think of the partnership of Elhart Melcher and Hans Werner Aufrecht as a sort of modern day equivalent of the medieval armourers of the past. They toiled in their workshop (first in Burgstall and der Murr, later in Affalterbach), creating wheeled dreadnoughts of fearsome power.

These days, the Mercedes name is tied to AMG as if by marriage. Mercedes-AMG is its own sub-brand of the parent company; rather than a separate skunkworks, it has become an important part of Mercedes-Benz's engineering and sales strategy, integrated right into the brand's DNA.

How did we get from a shed to here, with dedicated racing efforts and an AMG variant in every showroom? It was a long road, one populated by some of the biggest-engined monsters the automotive world ever saw. Here's the story of the evolution of AMG. 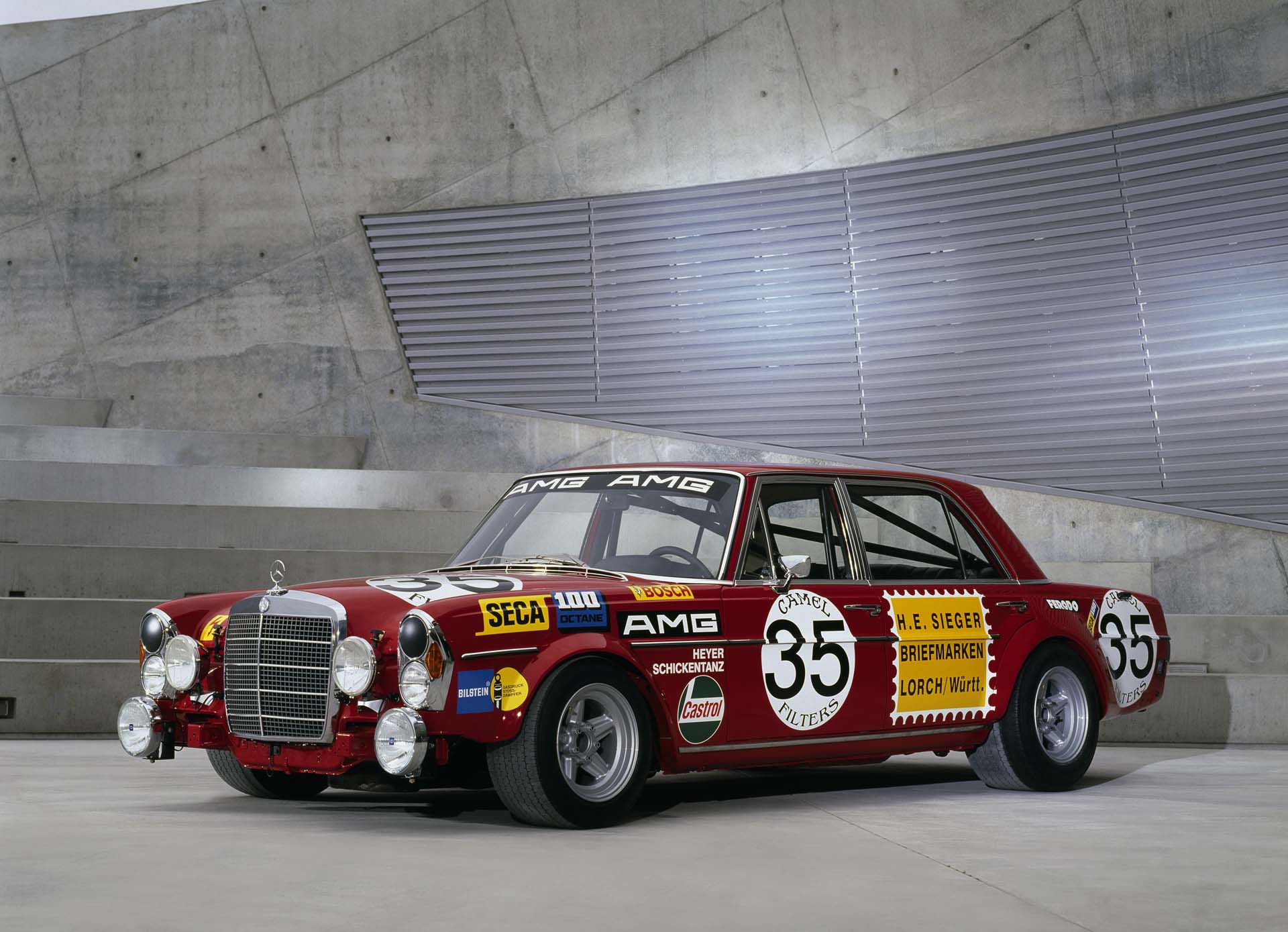 It was the most unsubtle of beginnings. While other automotive manufacturers focused on making their cars as light as possible, AMG's earliest racing effort showed up at the 1971 24hrs of Spa with a two-tonne curb weight, bright red paint, flared fenders, enough auxiliary lights to qualify as an anti-aircraft weapon, and a 420 hp 6.8L V8. It very nearly won that race by sheer brute force, establishing AMG's bona fides with hammerblow effectiveness. 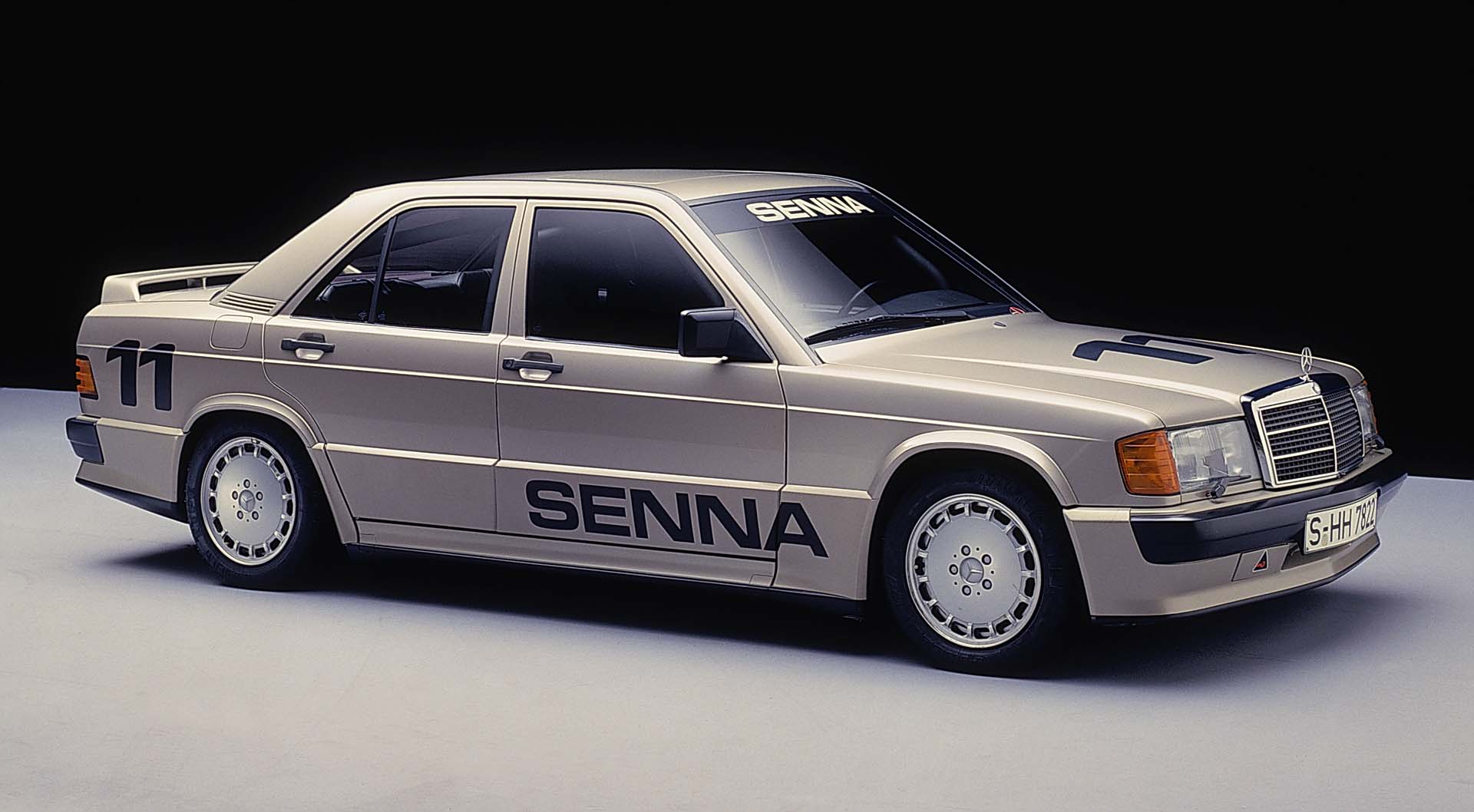 While the four-cylinder engine of Mercedes' lithe little W201 compact sedan was actually fettled by Cosworth, it'd be AMG that would get the car campaigning in DTM racing in the mid-1980s. The very first race, held at the Nurburgring, was a publicity stunt featuring big names like Niki Lauda, James Hunt, Stirling Moss, and Alain Prost. A relative unknown named Ayrton Senna won. 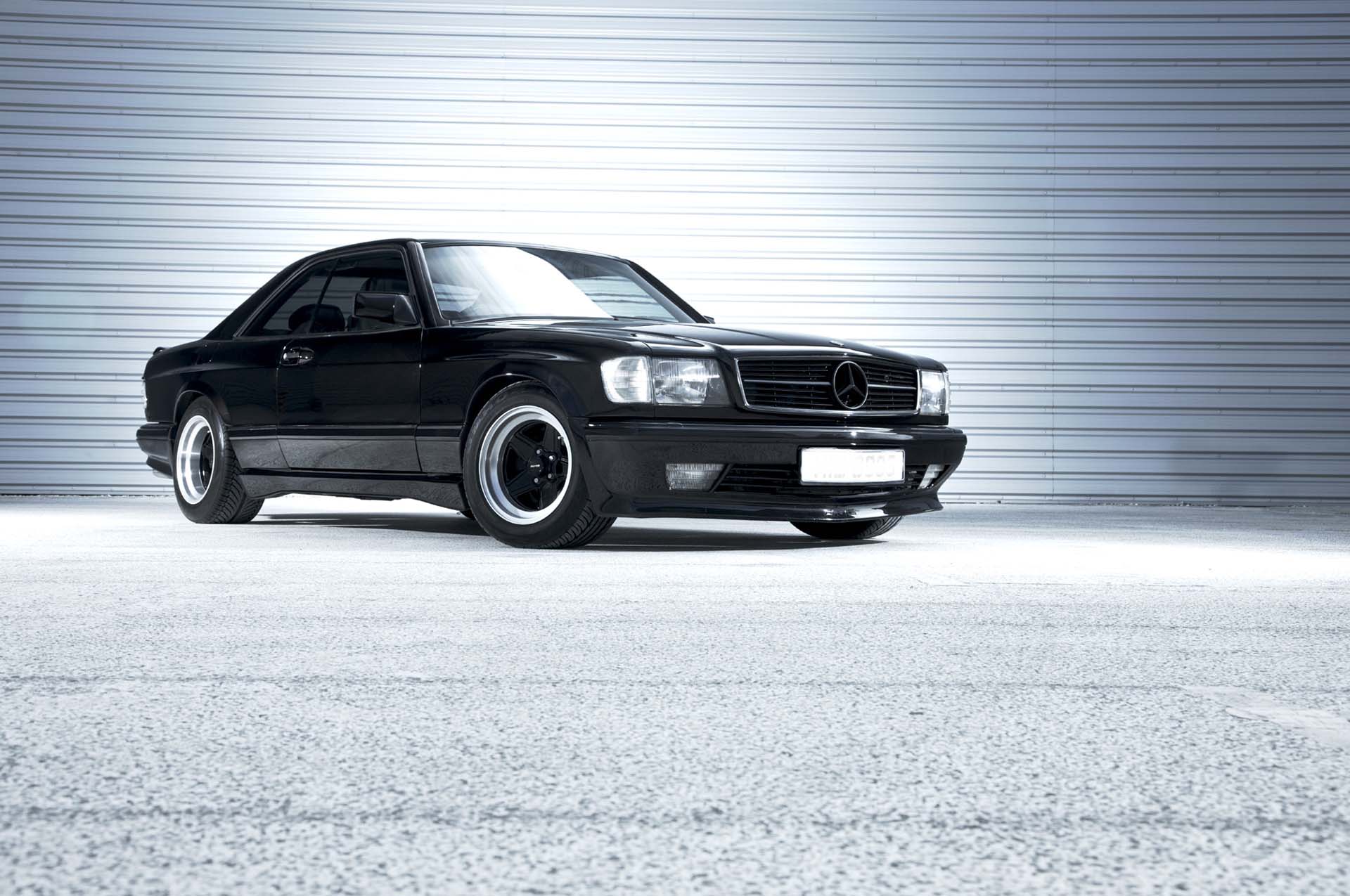 While racing was undoubtedly the main focus for the newborn AMG, they also had a great deal of success modifying factory Mercedes-Benz vehicles into road-going terrors. One such customized beast was the AMG-fettled 540SEC, a widened coupe with menacing blacked-out street presence and a 5.4L V8. Mercedes had long stopped offering a manual transmission, but AMG would still convert your 540SEC to stick. 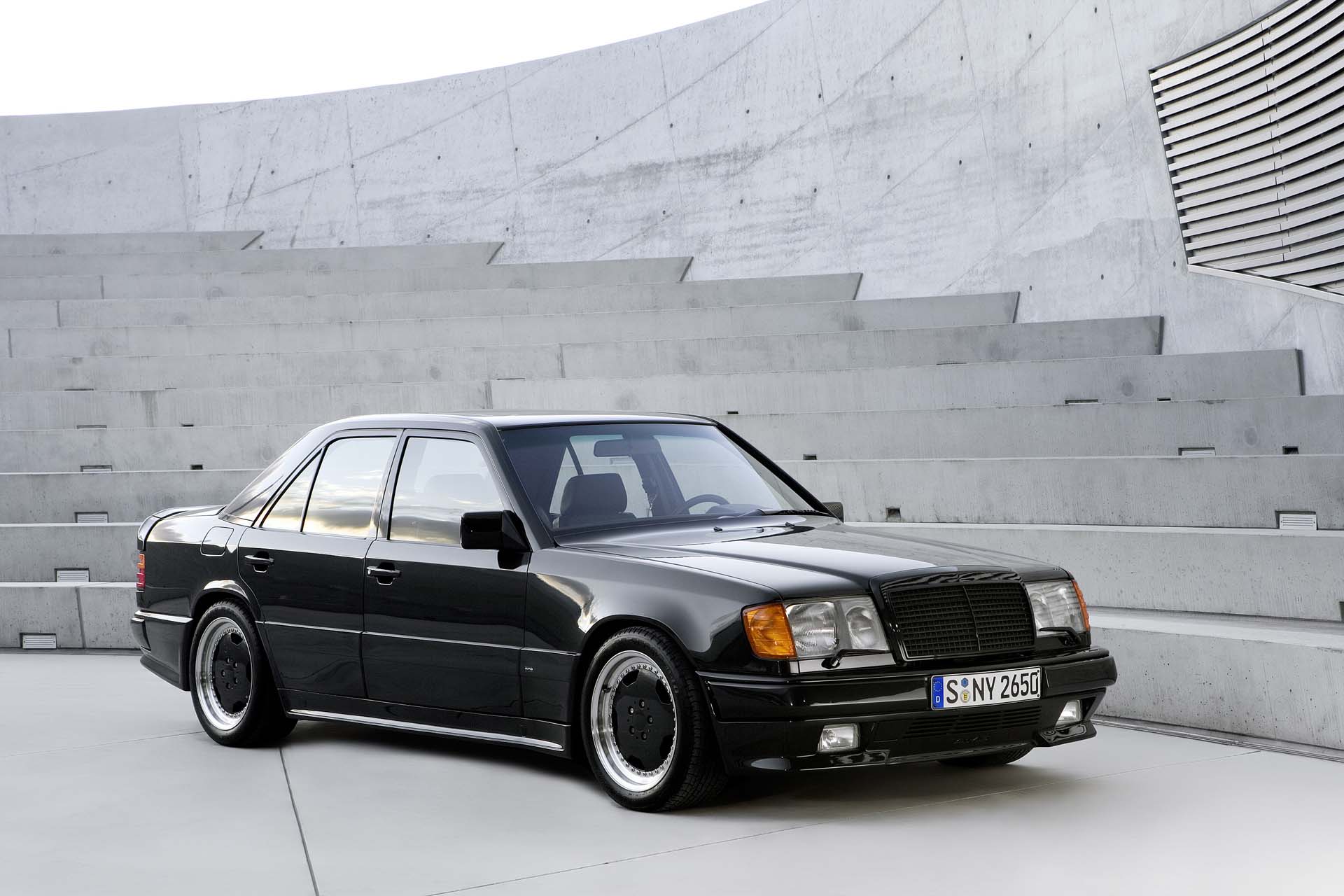 If there's a legend Mercedes trots out every time they launch a new AMG product, it's this one. The Hammer took the sedate sedan body of the 300E and stuffed in a 6.0L all-aluminum V8 with quad-valve heads and double-overhead cams. It made a minimum of 365 hp in emissions-strangled US spec, and way more overseas. 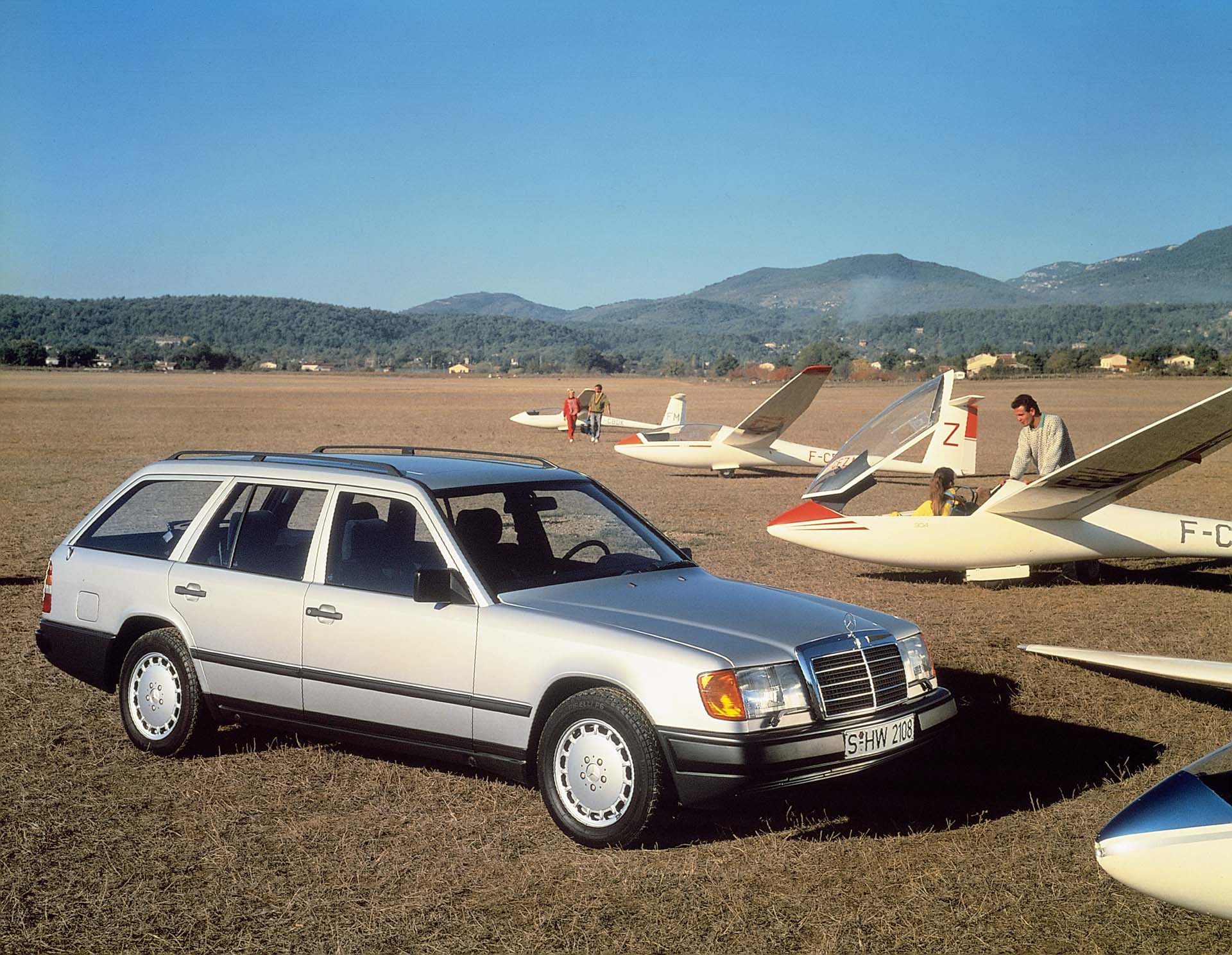 Almost totally forgotten, the Mallet is an AMG one-off from the time when one-offs were absolutely something the company did, being a specialist tuner. The 300TE wagon was fitted with a bored out 6.0L V8 that lacked the clever heads of the Hammer, so they dubbed it the Mallet instead. Still a bludgeoning weapon. 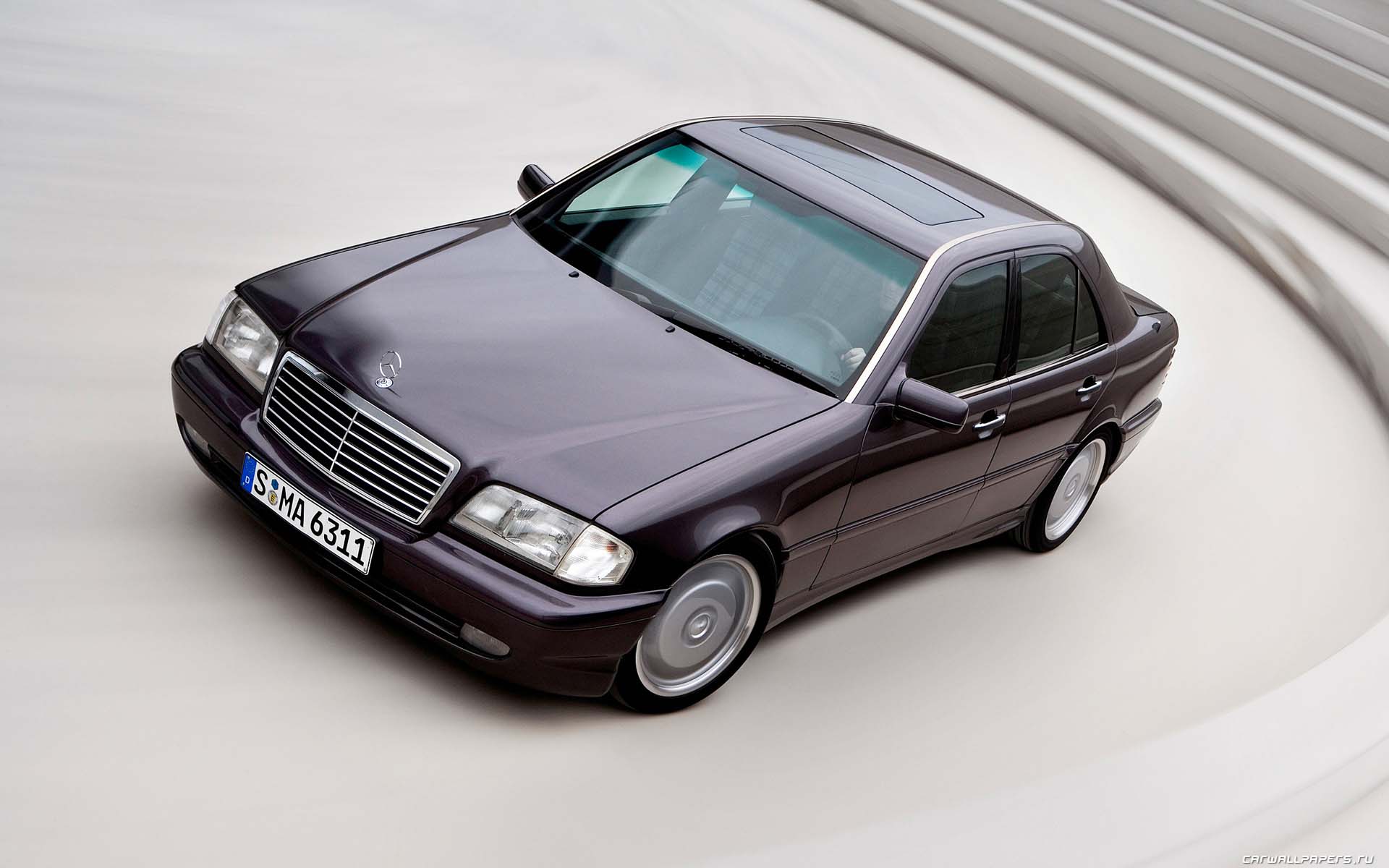 While not possessed of the big-stove powerplants of its predecessors, the C36 gets a mention in the AMG pantheon for being the first AMG model you could buy out of an M-B showroom. Its 3.6L six-cylinder engine made about 276 hp (AMG later admitted it was probably slightly more), and was positioned as a competitor to the BMW M3. It didn't quite cut the mustard, to be honest, but remains rare and collectible. 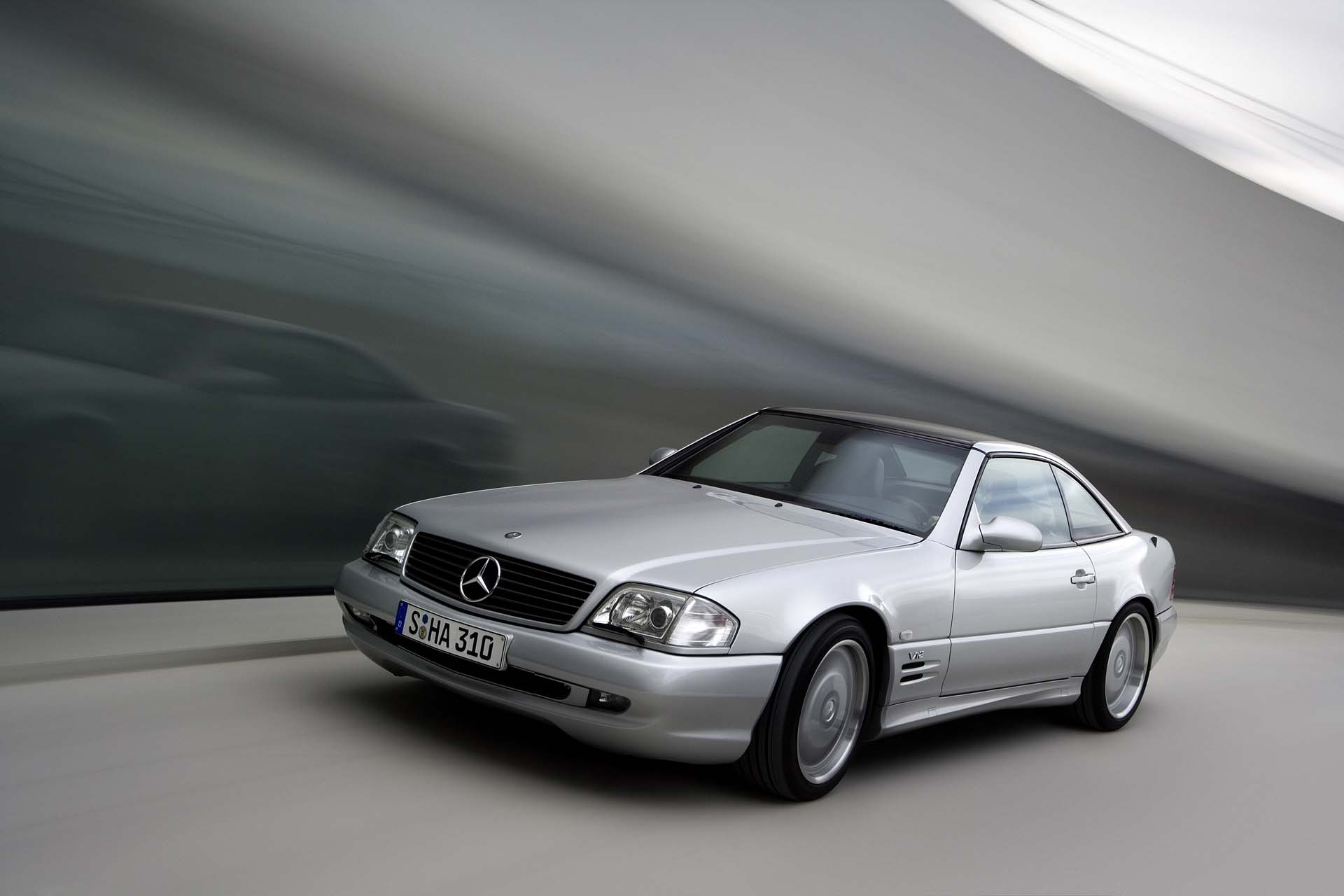 Extremely rare, this classic-looking R129 roadster gives little clue to its behemoth might. Under the hood is an absolute colossus of a V12, a 7.3L unit making 518 hp and 553 lb-ft of torque. Possibly the most interesting thing about this car is that its massive engine would go on to form the foundation for the cars of Horatio Pagani. 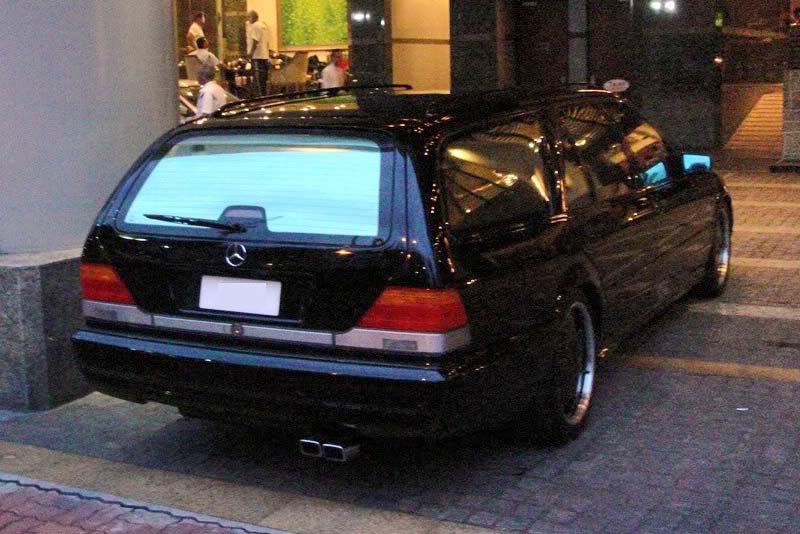 Another one-off, this wagon's worth mentioning simply because it's so nuts. Commissioned by the car-crazy Sultan of Brunei, it’s an S-Class converted into a wagon and then stuffed with that same 7.3L V12. Capable of over 200 mph (320 km/h), the Sultan ordered 10, and a few others passed into the hands of private buyers. 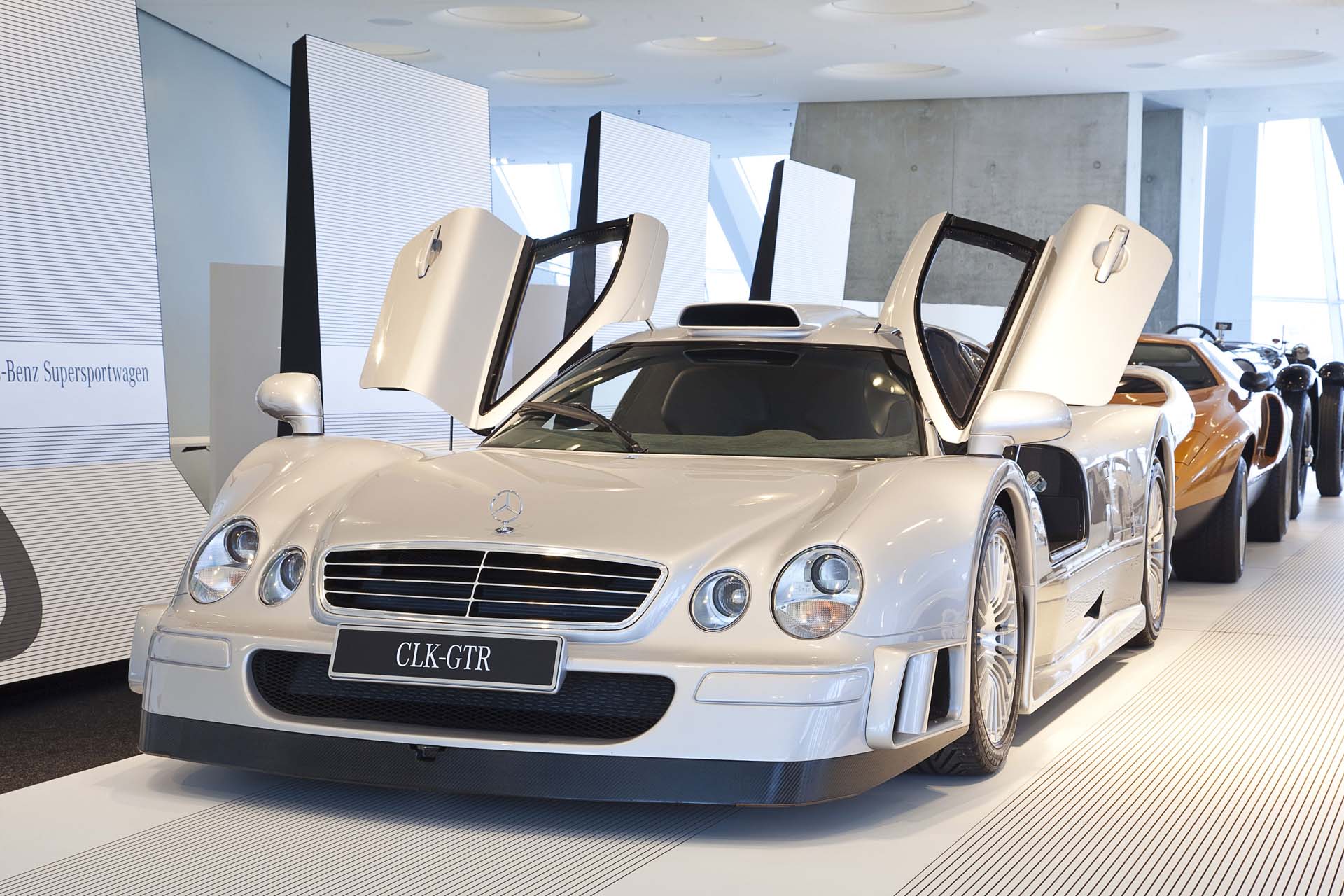 A racing car that's about as far from a normal CLK coupe as it's possible to get, the CLK-GTR is a mid-engined 6.9L V12 monster made of carbon-fibre. A homologation special built for GT1-class racing. Just 25 were built as road cars, and they are extremely valuable today. Right around this time, Mercedes acquired 51 percent of AMG's shares, and incorporated the tuning arm officially into the range. 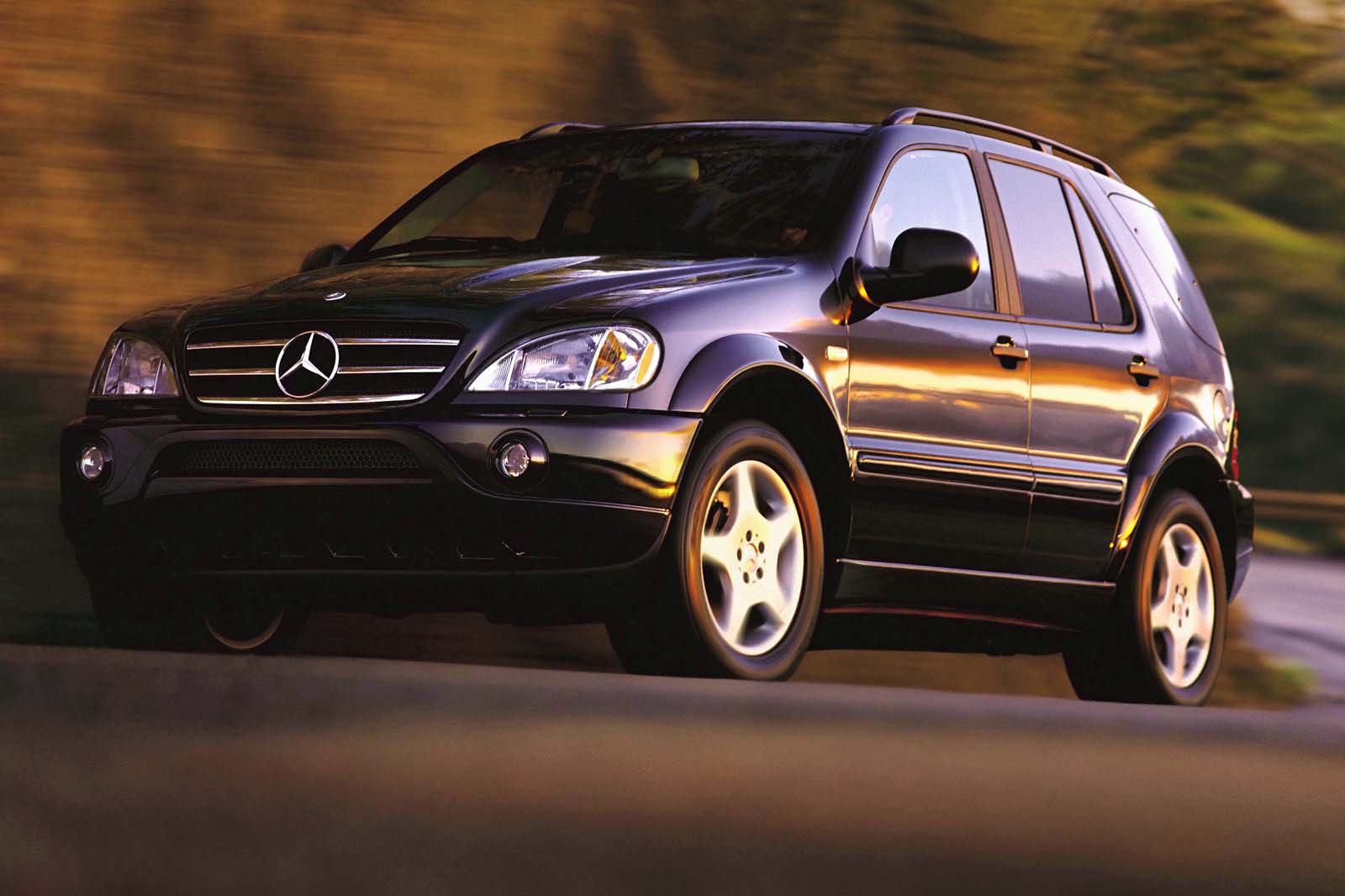 As an official partner of the company, AMG set about cramming V8s into any Mercedes-Benz they could get their hands on. The ML crossover was a perfect recipient. It was eminently practical and – now with AMG's 5.5L eight-cylinder in it – very fast. 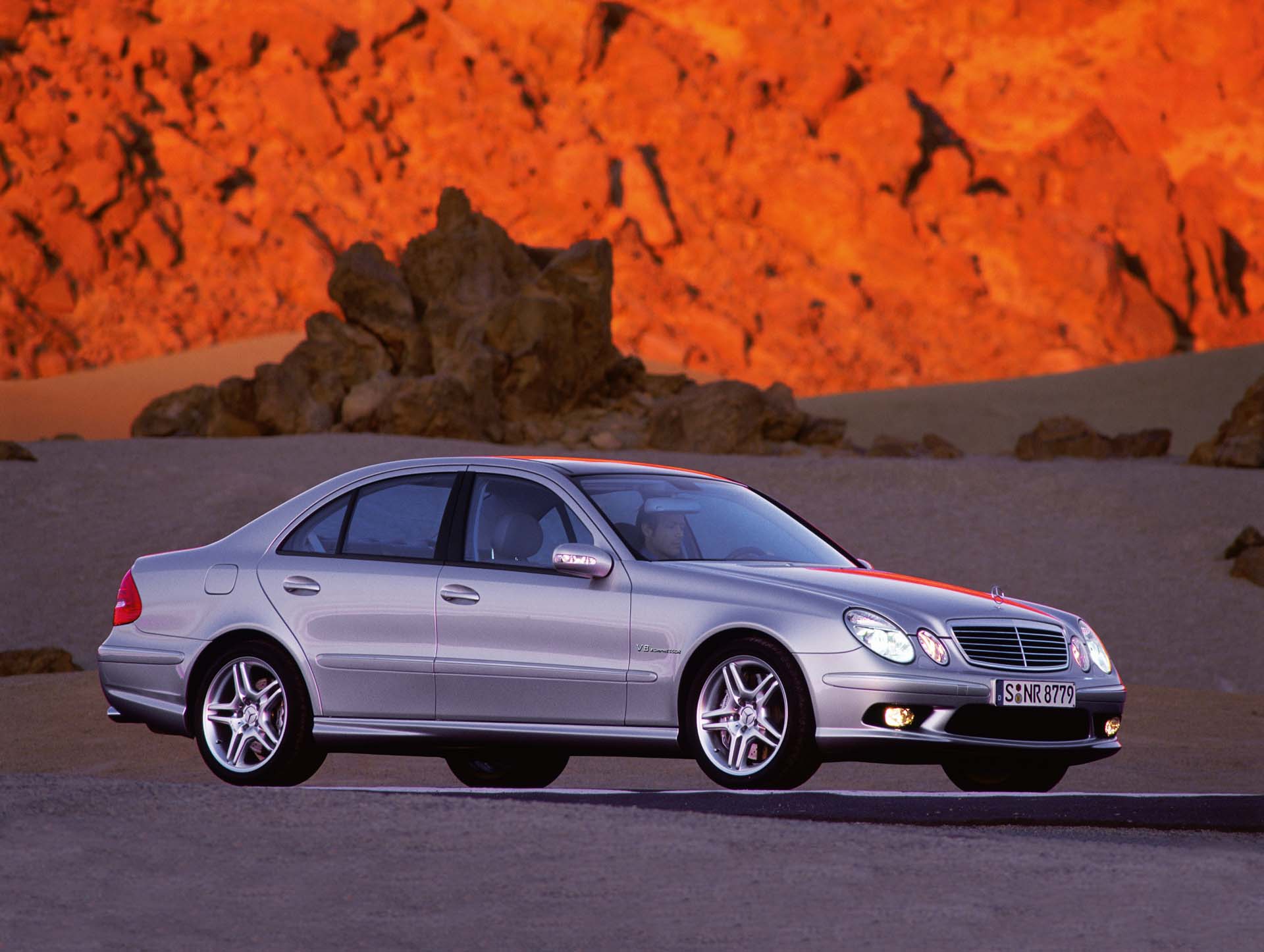 AMG's next breakthrough technology was to turn from mere added displacement to the fury of forced induction. The result was the E55 sedan's 5.4L supercharged V8, good for 469 hp and 520 lb-ft of torque. Even today, this is an incredibly fast car, thanks to all that low-end grunt. 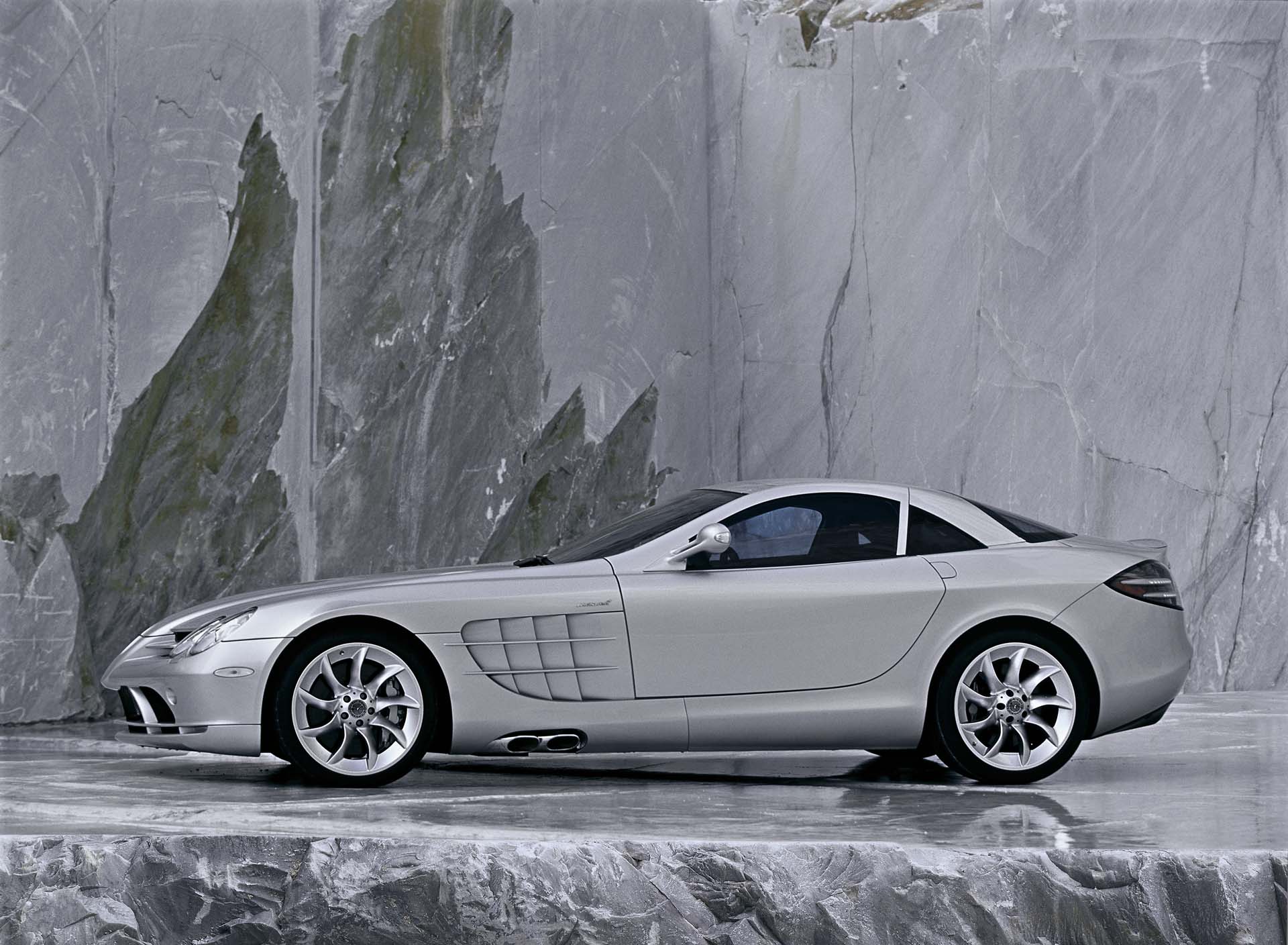 Built in conjunction with McLaren, the SLR is a tribute to the mighty 300SLR racing cars of the 1950s. It gets a 617 hp version of that supercharged 5.4L V8, a gorgeous carbon-fibre body, and some pretty neat doors. Regrettably, you can only get it with a five-speed automatic transmission. 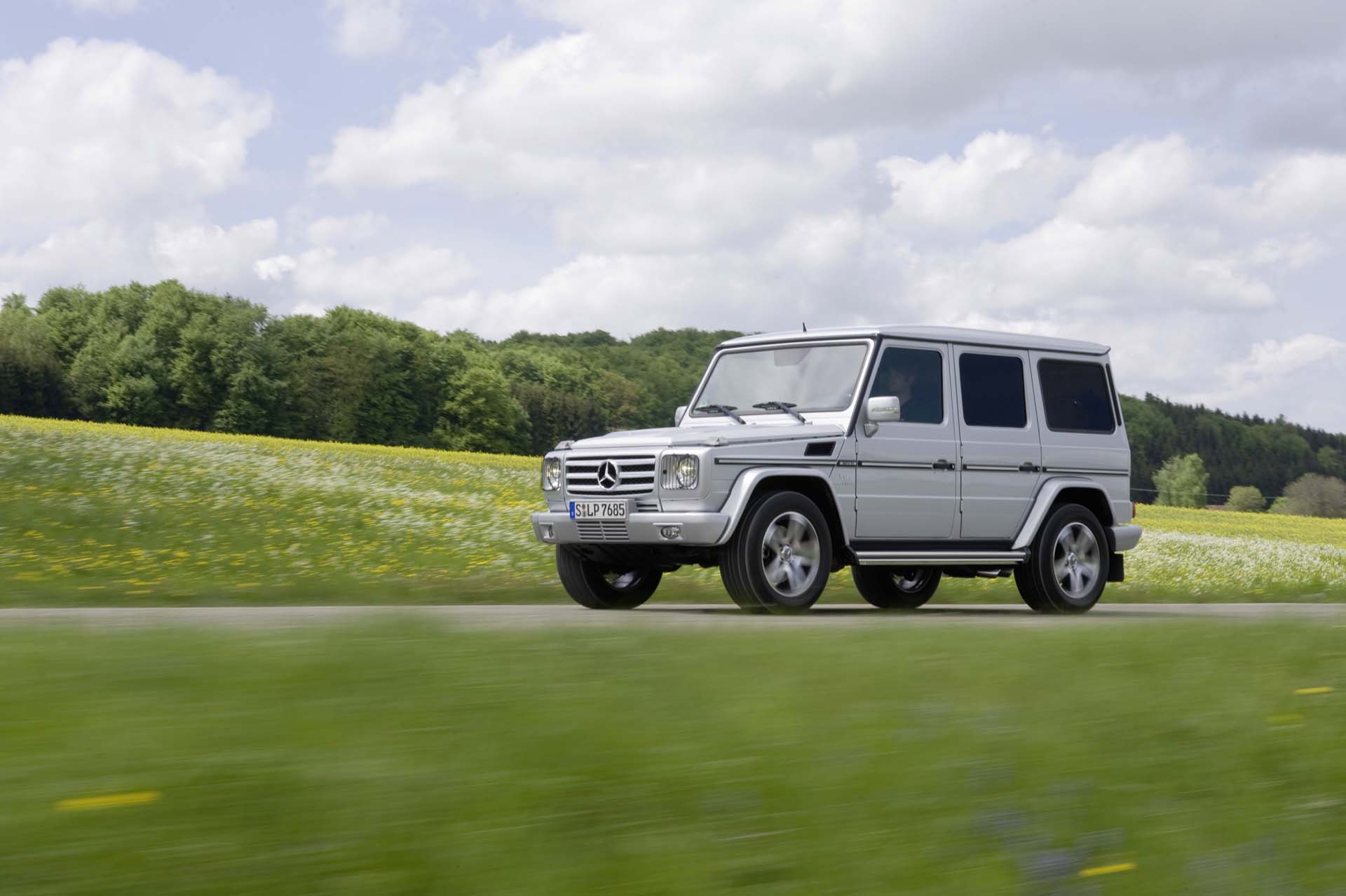 Less subtle than pretty much anything in Mercedes' lineup, the Mercedes-Benz G55 AMG is basically a rocket-propelled elephant. Immense off-road capability is married to AMG's single-minded focus on acceleration, with the result being a car the size of a shed that can scoot with hilarious speed. Fuel economy is incredibly bad. 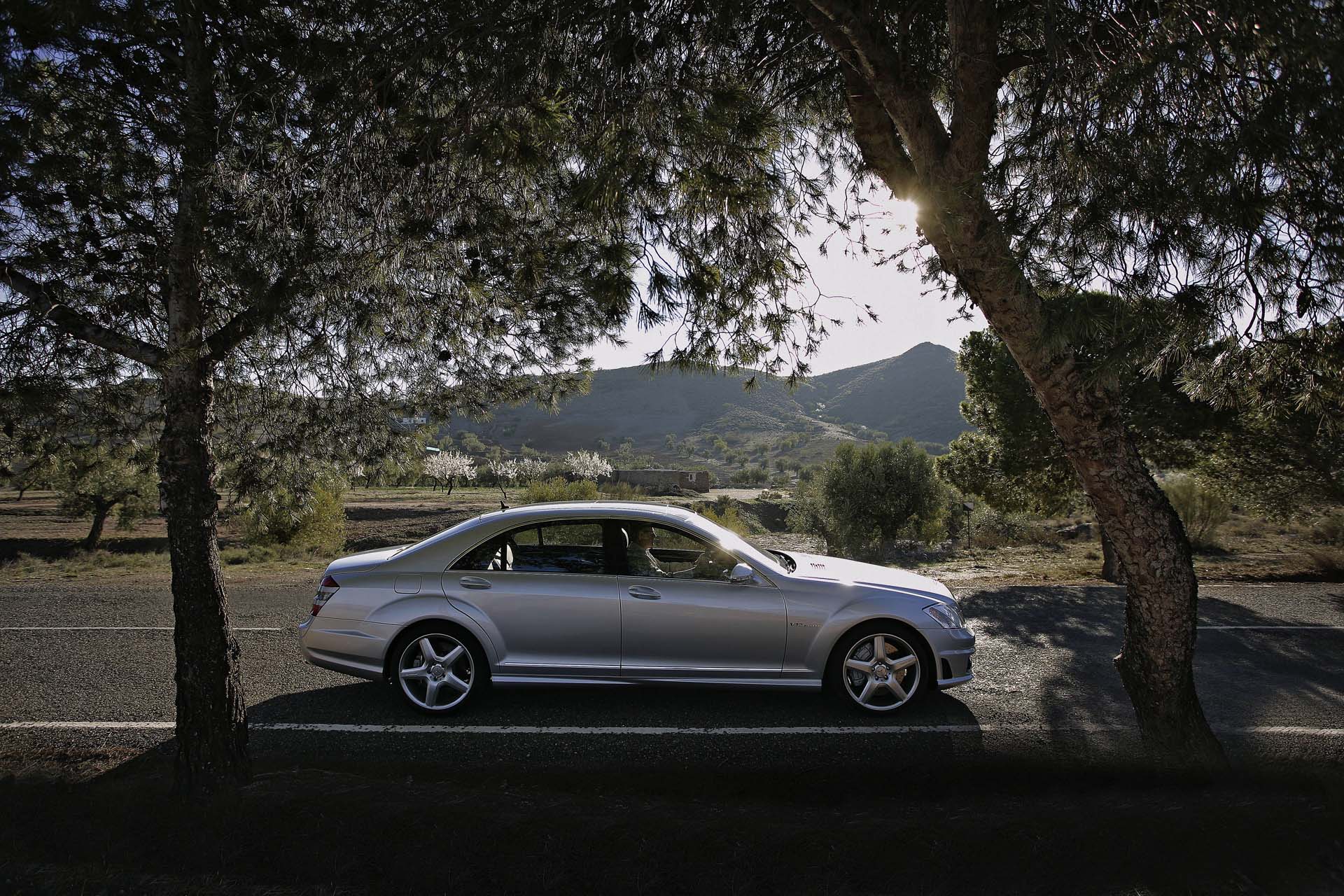 The only thing faster than the acceleration is the speed with which this thing depreciates. Not satisfied with merely tuning the already-present V12 in top-level S-class Mercs, AMG went about fitting twin turbocharging to give the car 604 hp and an insane 738 lb-ft of torque. Because of the complexity, they're cheap to buy used – that's cheap to buy, not to maintain. 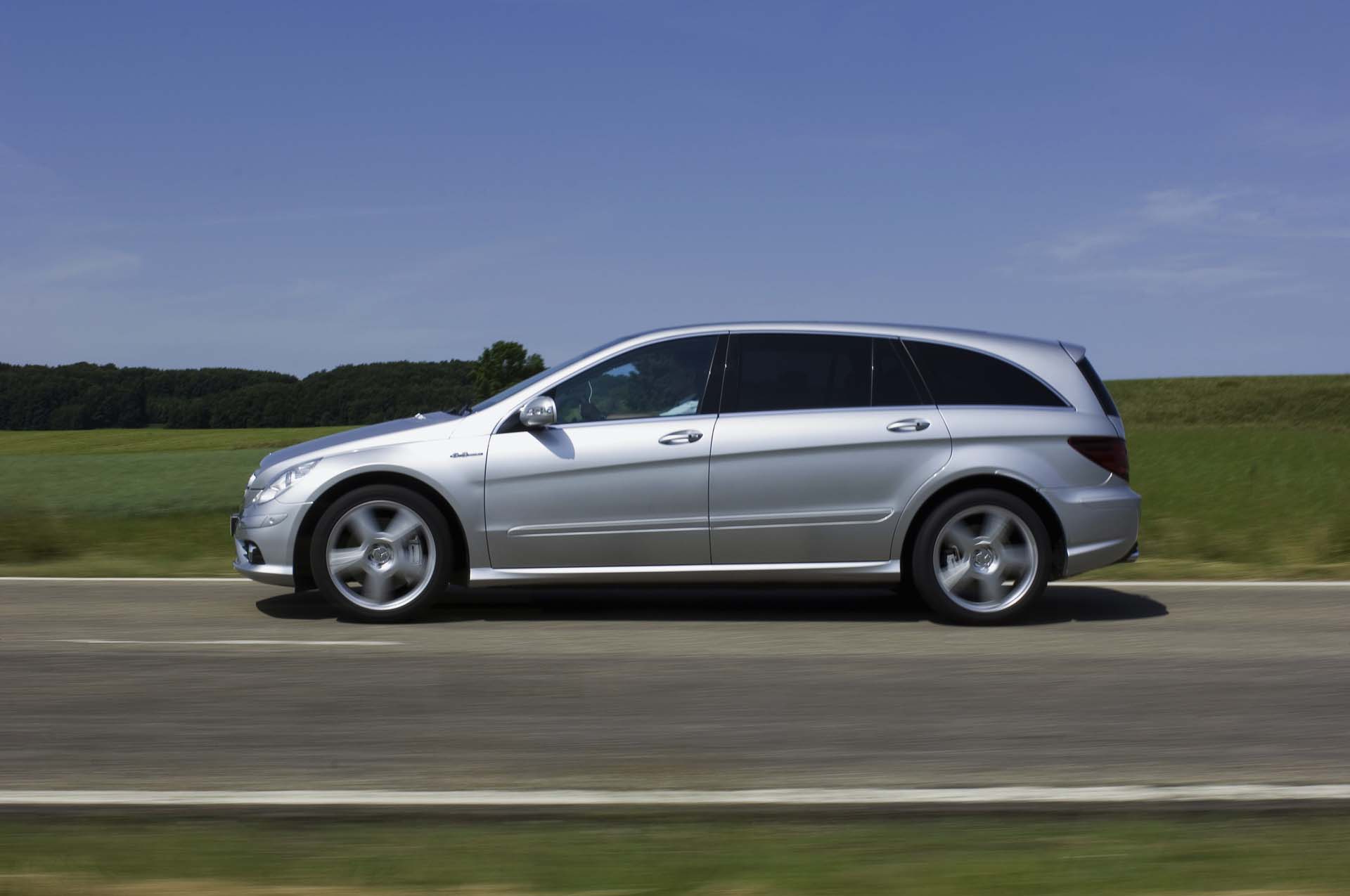 As replacement for their 5.4L supercharged V8, AMG went back to big displacement, launching a 6.2L V8 that would spread through the Mercedes lineup. It was never more hilariously inappropriate than here in the R63, a sort of maniac's minivan. Something like five were sold in Canada, but you see the odd one imported from the US as well. A laugh riot. 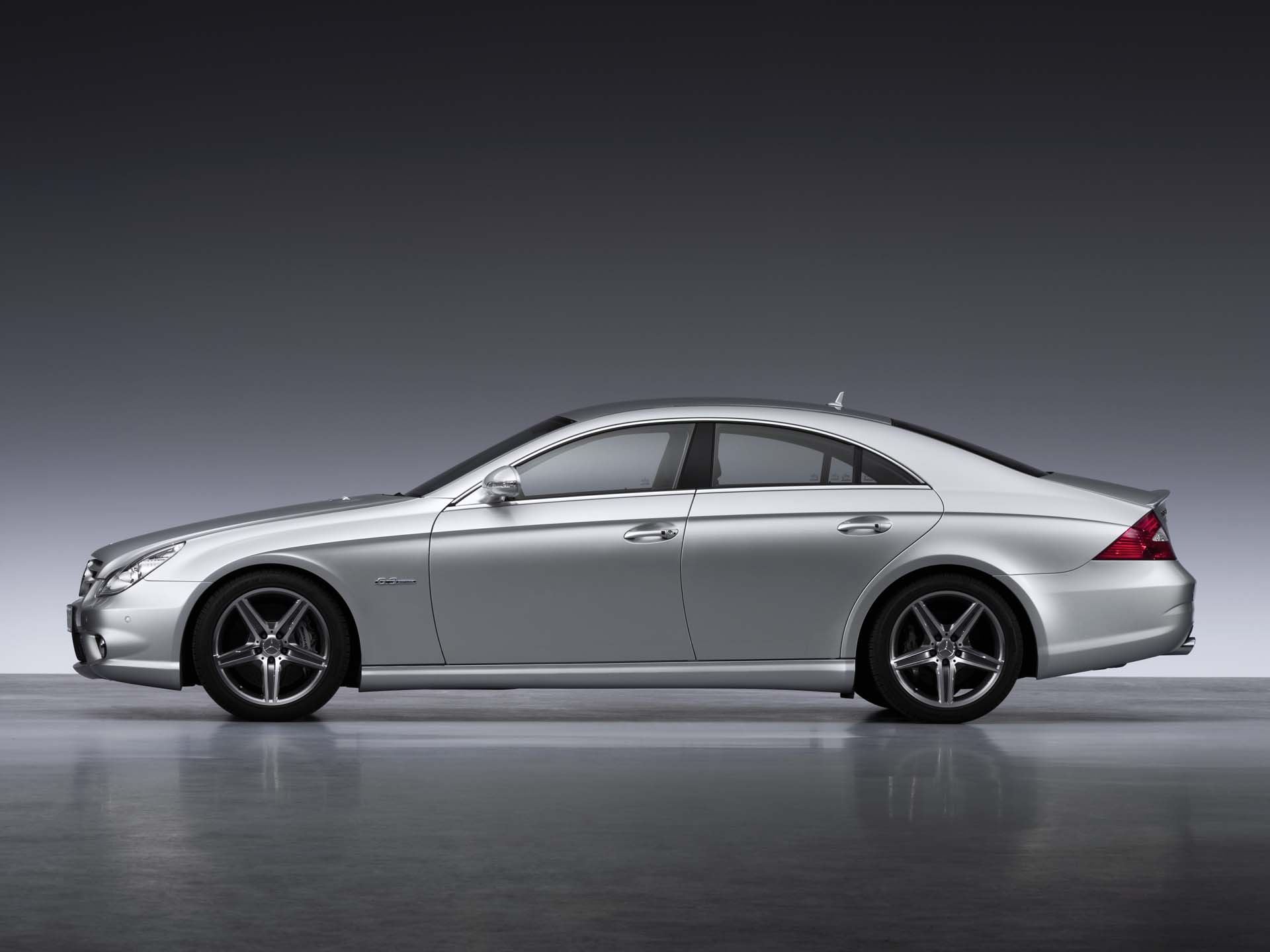 The 6.2L V8 is a lovely thing, crackling and barking to life every time you fire it up. When paired with the coupe-styled CLS, it's beauty and the beast. However, by this time there were already indications that the 6.2L wasn't long for the world, and that the future of AMG would be turbocharged. Before that happened, though, there'd be some epic rides. 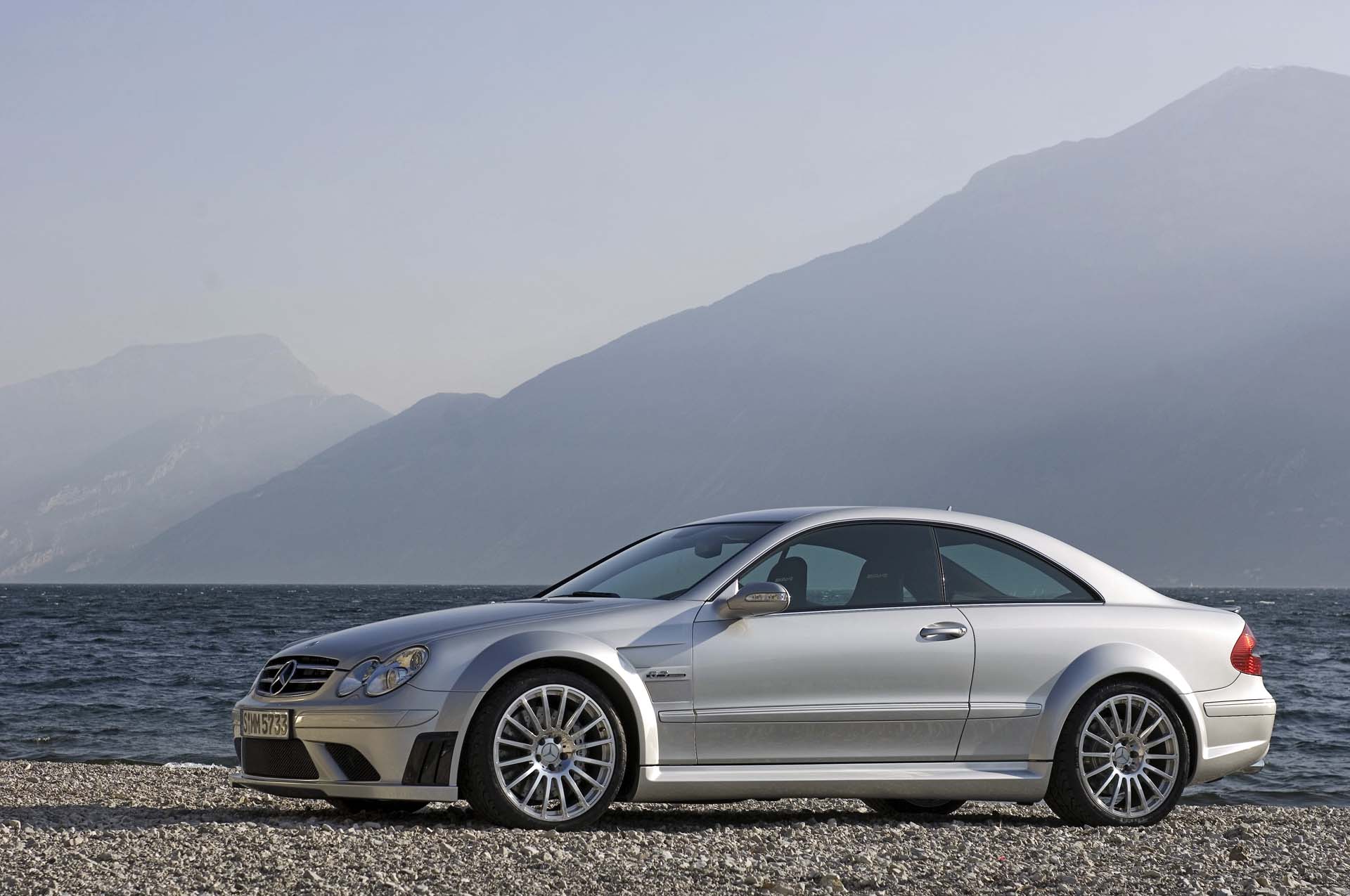 If regular-grade AMG insanity isn't enough for you, rest assured that's there's more of where that came from. The 6.2L V8 is tuned to 507 hp, the body is flared out, the rear-seats are removed, and the suspension made even stiffer. Only coupes can have the specialty appellation of the Black Series, and this is the first of them. 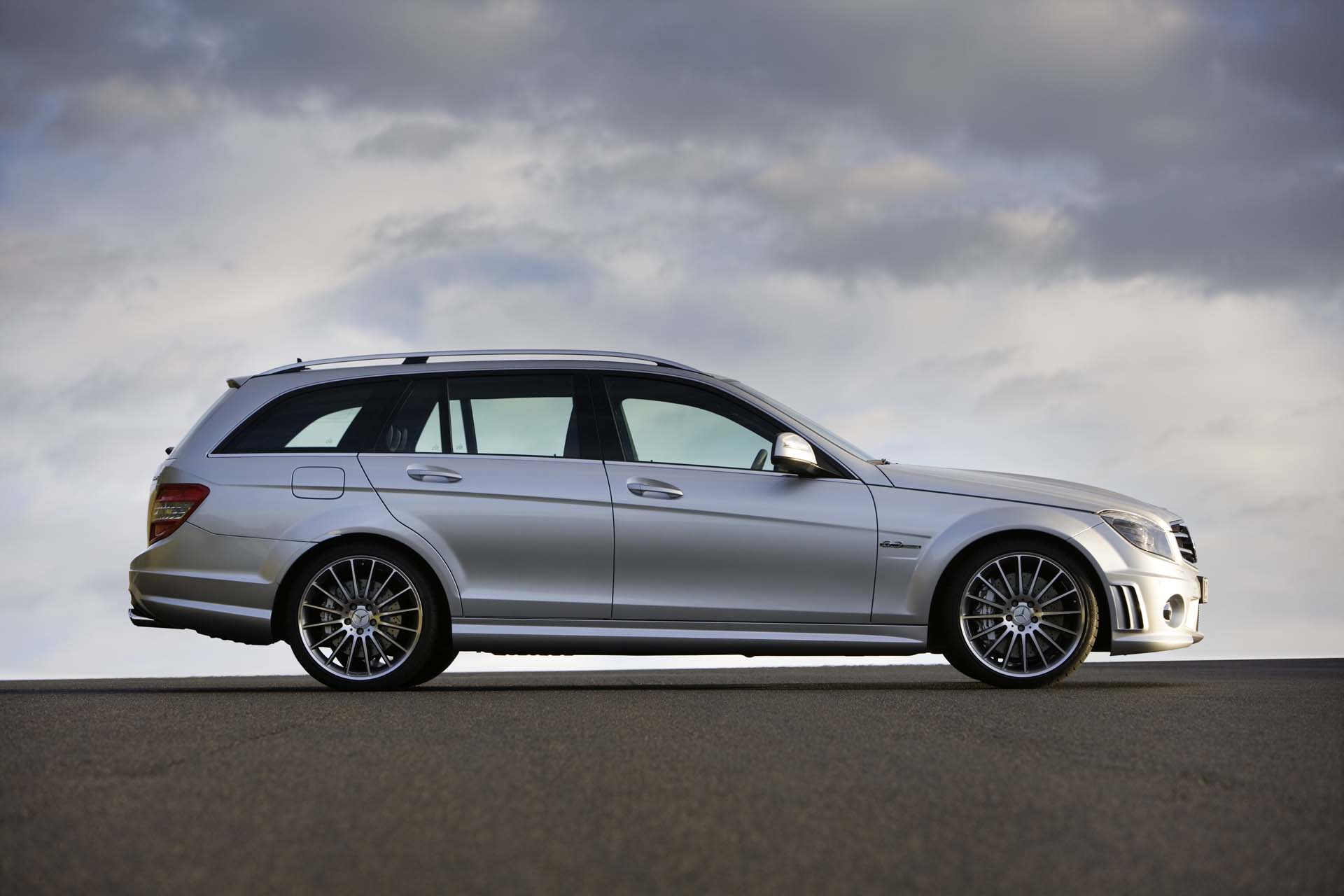 As the official medical car for Formula 1, the wagon version of the C63 could claim a need for the speed that accompanied its practical nature. Over here we only got the sedan variant, but that was still a hell of a car by itself. Performance package equipped models are the ones to have if you can find them, but a CPO C63 remains a great bargain way to get into AMG power. 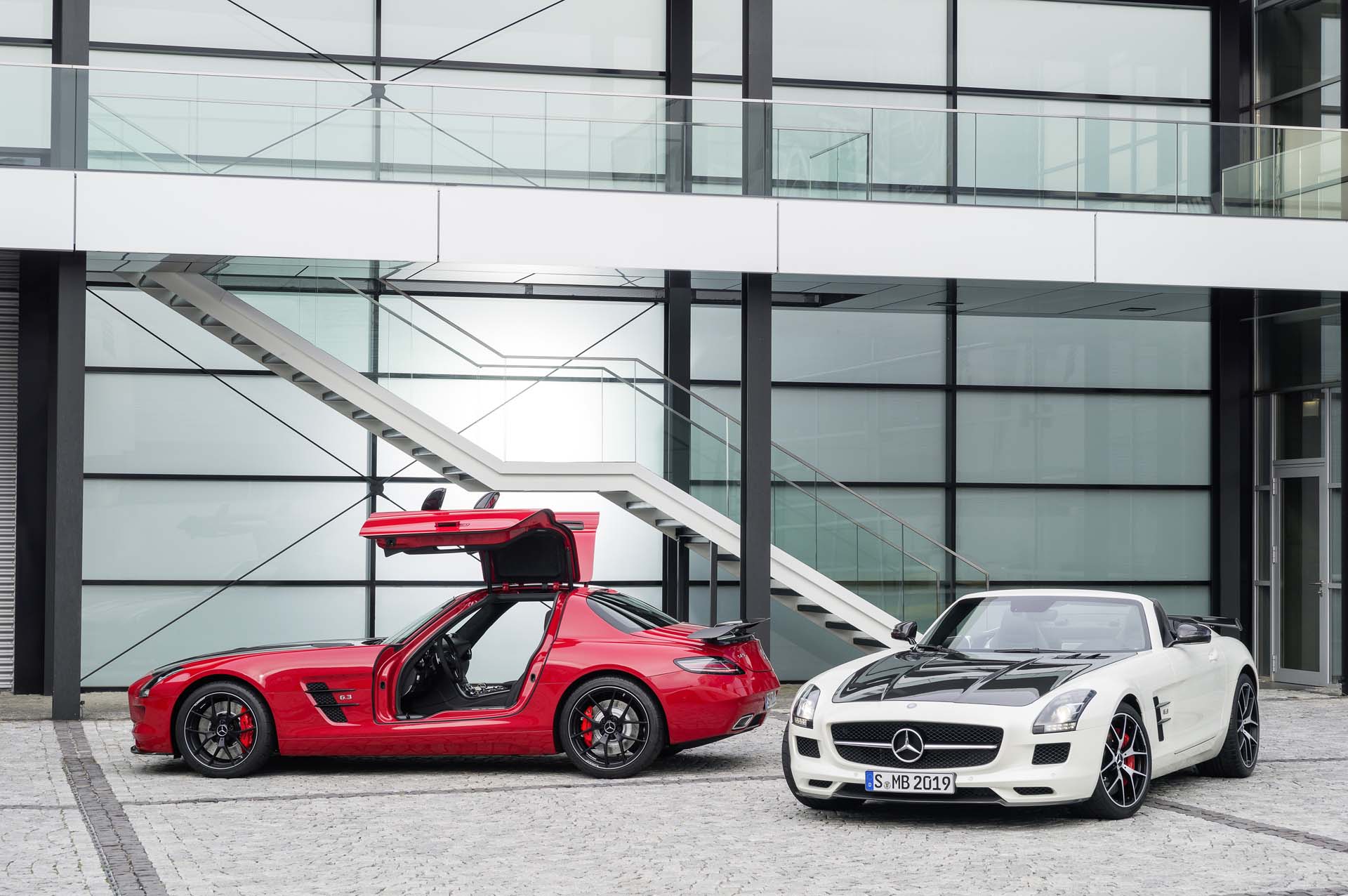 As a tribute to the original gullwing, the SLS AMG was a triumph; as the first Mercedes built completely from scratch by AMG, it was even more so. First a gullwinged coupe and later a roadster, it was the flagship vehicle for both AMG and Mercedes, a distinctly more hardcore machine than the SL roadsters. It would also be a fitting swan song for the 6.2L V8. 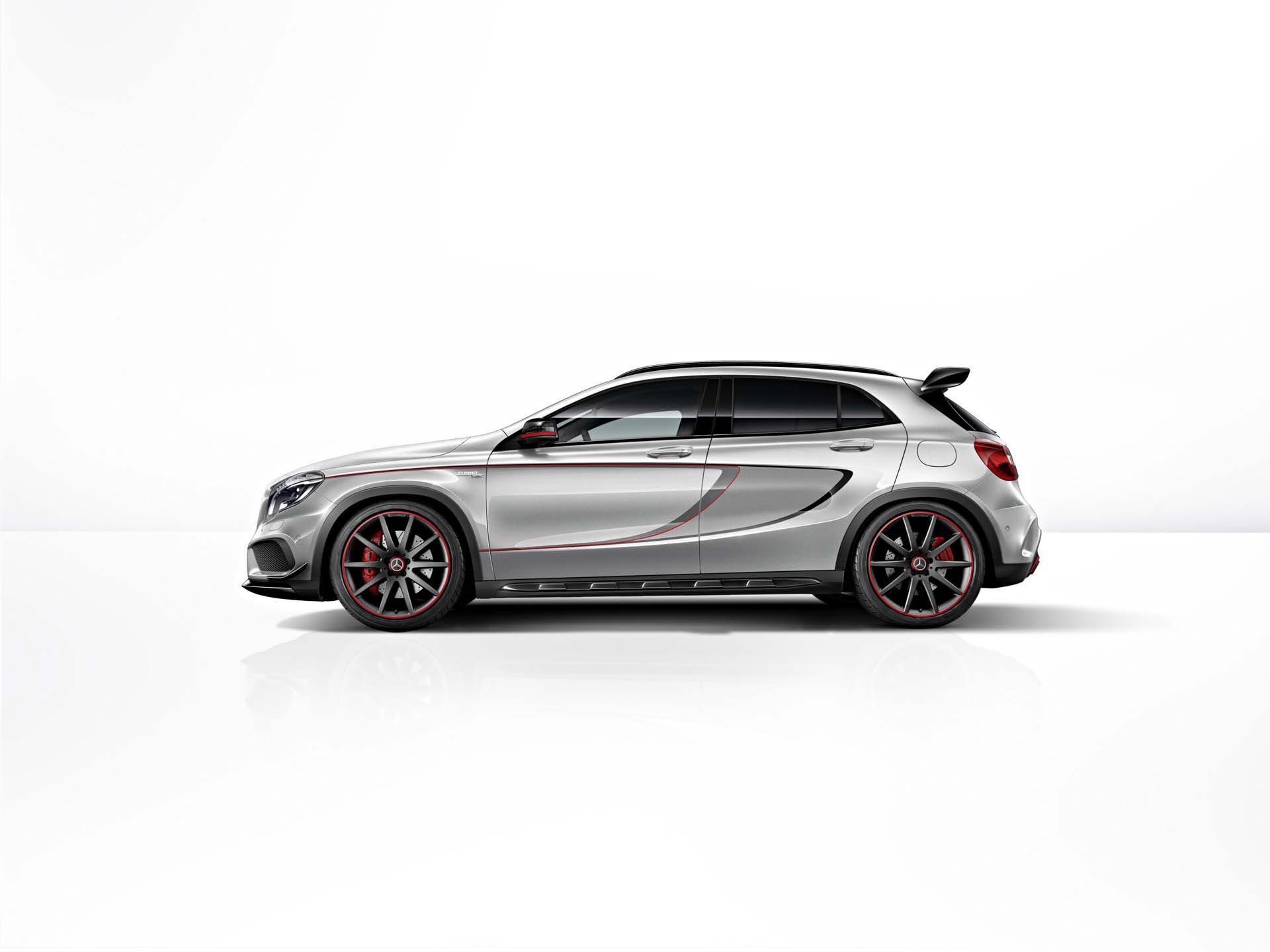 Kitted out with a giant spoiler, canards, and a shape that was more World Rally Championship racer than genteel cruiser, the AMG version of the GLA crossover was a very odd machine to look at. Happily, it came with a 360-hp 2.0L turbocharged engine that let it skip ahead of Subaru STIs and Mitsubishi Evos, bringing AMG power to a whole new segment.

Even as they turned to forced induction to help produce excellent power outputs with more reasonable fuel economy, AMG was still cranking out the lunacy. Witness the 6x6 version of the G63, complete with a pickup-truck bed and sand-storming capabilities. 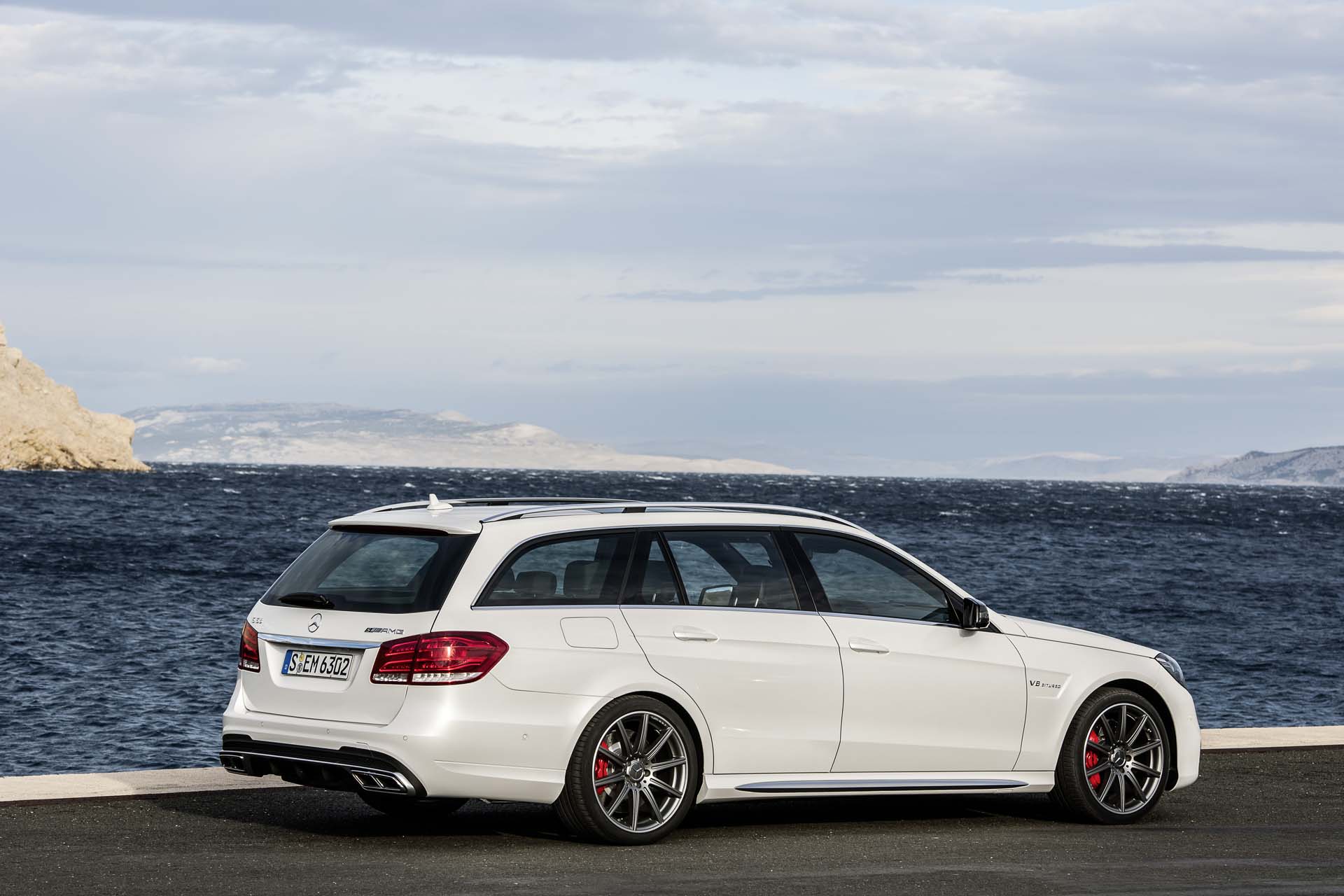 Mercedes-Benz is justifiably proud of the way they're a player in the large European touring wagon segment, facing off against Audi's RS6 Avant. Regardless of why they're there, we're just happy they offer an AMG version of their family hauler. With a twin-turbo 5.5L V8 making 577 hp and 590 lb-ft of torque in the most-powerful S-model designation, it's enough to laminate your labradoodle to the rear window. 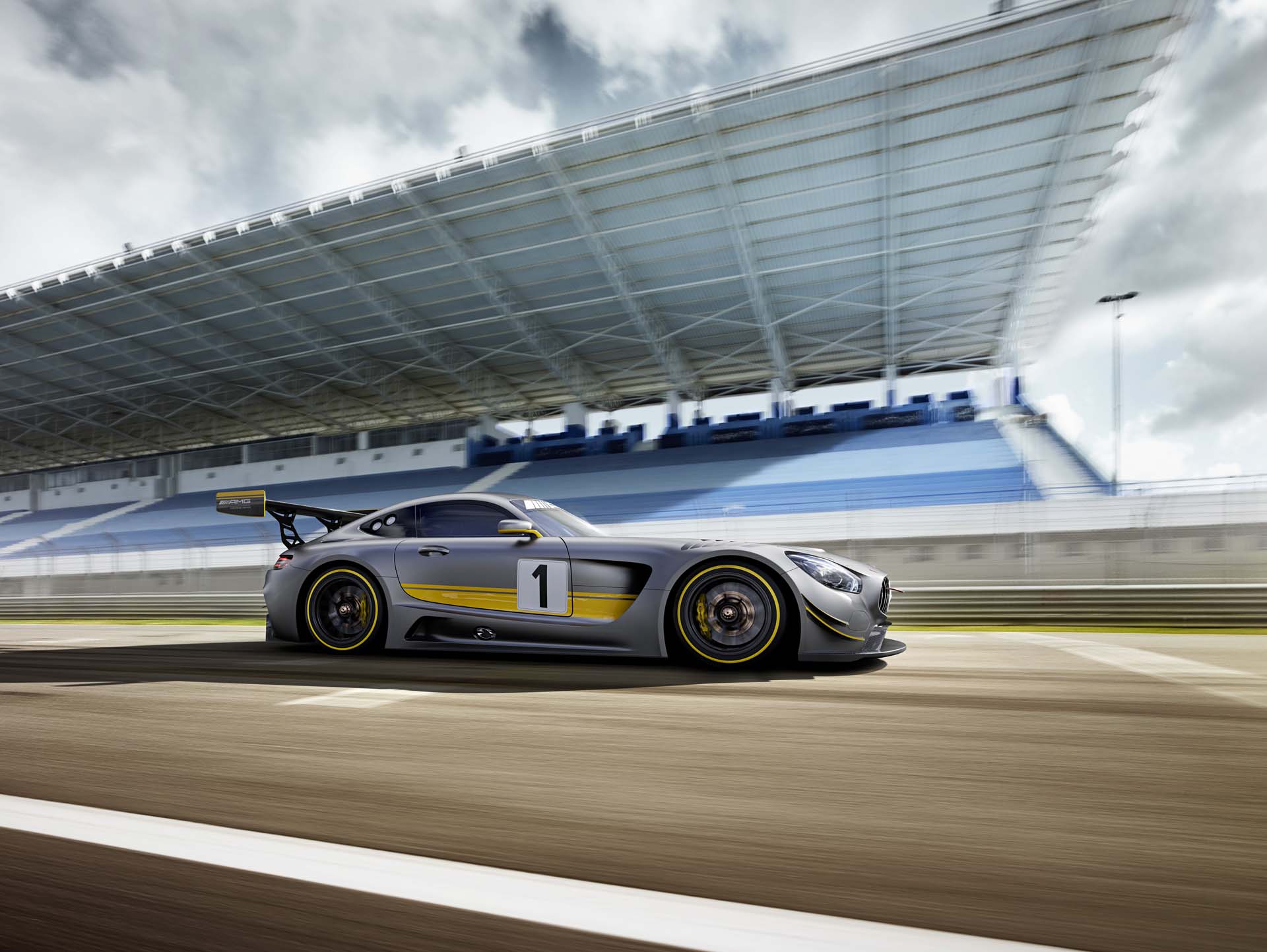 Less expensive than the SLS AMG, and fitted with regular doors, the Mercedes-AMG GT S is still enough to set fire to your pants. A rival for the Porsche 911, it's actually quite a bit quicker than the old normally aspirated Neunelfer, thanks to the Merc's mighty 4.0L twin-turbocharged engine. The GT3 racing version is even more monstrous, fitted with a Cessna-sized rear wing. 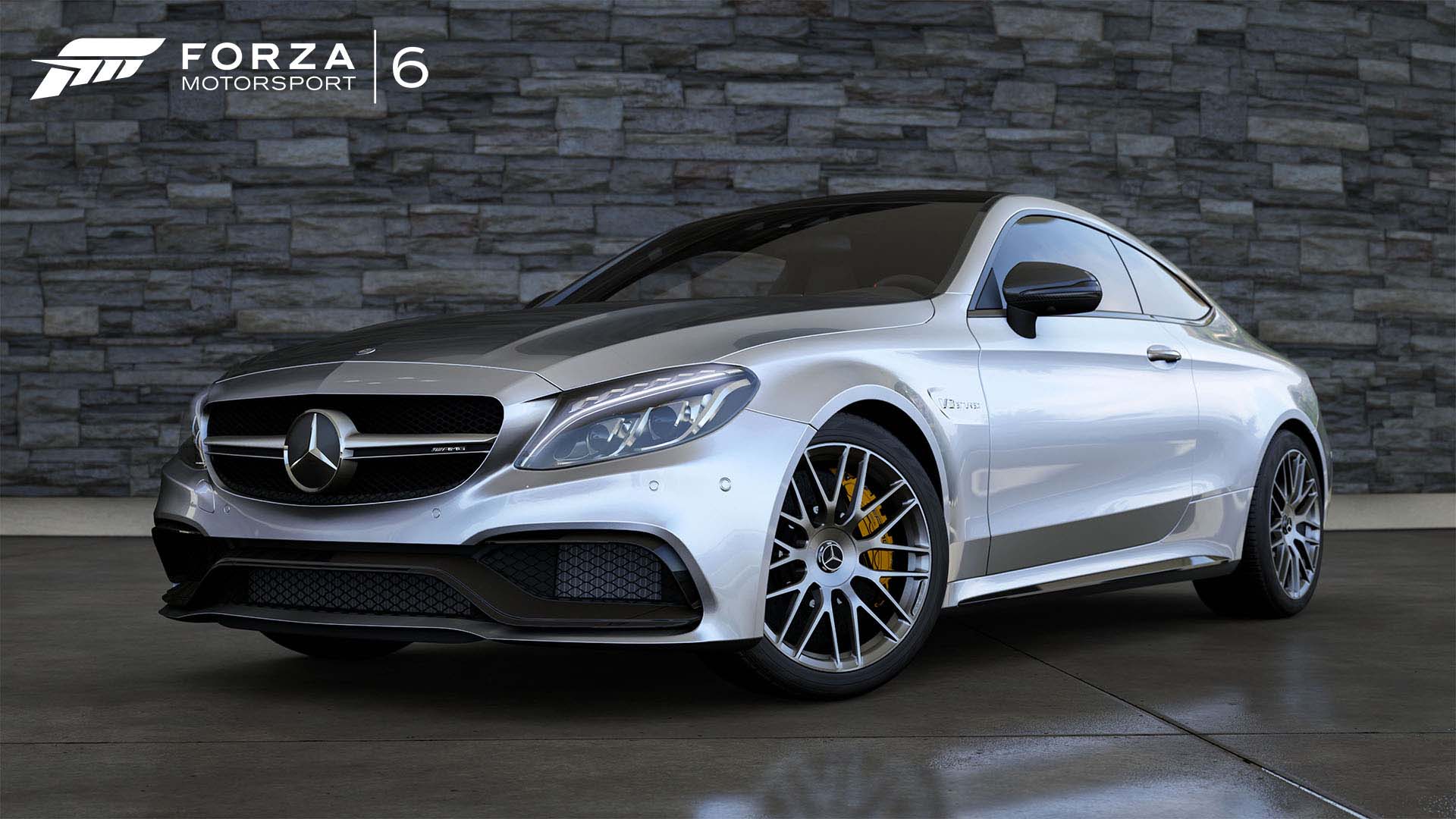 We're used to AMG products being able to scorch in straight-line speed, but one that can handle? The new C63 coupe fits the bill, especially when it's got the “S” designation out back. It's a surprisingly docile and friendly car, yet eager to leap ahead and destroy all comers with ferocious twin-turbo V8 power. BMW owners should watch their six: the latest evolution of AMG is here to take them out.