A look at a range of hot offerings from the used luxury flagship sedan marketplace.
Advertisement

A look at a range of hot offerings from the used luxury flagship sedan marketplace.

Depreciation is a beautiful, beautiful thing – especially if you’re in the marketplace for a second-hand car that offers tremendous styling, presence, pedigree and technology on the relative cheap. Today, numerous flagship sedans from the world’s premier luxury automakers can be had for a fraction of their original price, meaning silly-cheap access to a world-class motoring experience.

After about a decade, some of these six-figure posh-rockets can be had for under $10,000!

We’ve gone back to the early to mid 2000’s for this feature, highlighting a variety of sedans for folks like you: big-dollar shot-callers who don’t want to spend a whack of cash to look like they just spent a whack of cash. You’ll benefit from flagship motoring goodness without the flagship pricing, and your neighbor’s brains will turn into zoodles when they try to figure out where you got the cash for that new-to-you luxury tarmac barge. 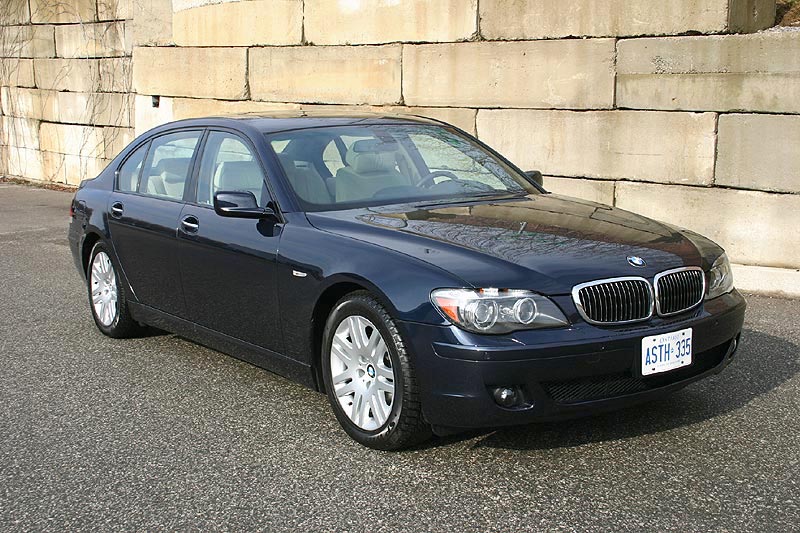 The 7 Series has long blended classiness, sportiness and that stately, handsome look that shouts ‘sleeper flagship sedan’, making this a seriously good deal on a seriously big-deal ride. You can get a great big frickin V12 engine too, if you like. Otherwise, look for instant status, plenty of space, and heaps of comfort from this top-line four-door. Other engine options included a 4.4L or 4.8L V8, topping out around 360 horsepower. An extended wheelbase model was available too, dubbed ‘L’, for fans of serious rear-seat legroom.

A misfiring or poorly performing model may be suffering from engine electronics related issues, potentially caused by a faulty sensor or ignition coil pack. Ensure the 7 you’re test driving performs smoothly at moderate and full throttle. Check that no ‘check engine’ lights or error messages are illuminated in the instrument cluster.

Difficulty shifting into gear, or the transmission entering a limited-power ‘limp mode’ may be caused by a faulty mechatronics adapter. This sounds pricey, and it is. Additionally, make sure the transmission in the 7 Series you’re looking at shifts smoothly and without a heavy ‘clunk’ between gears.

Check under the hood for signs of oil leakage, especially from the valve covers. This may be caused by a bad gasket on older models, and can be pricey to repair.

Buying a used 7 Series without a full pre-purchase mechanical and electronics inspection at a BMW dealer is not advised. With a thumbs up from a BMW mechanic ahead of your purchase, you’re well on your way to the world of luxury motoring. 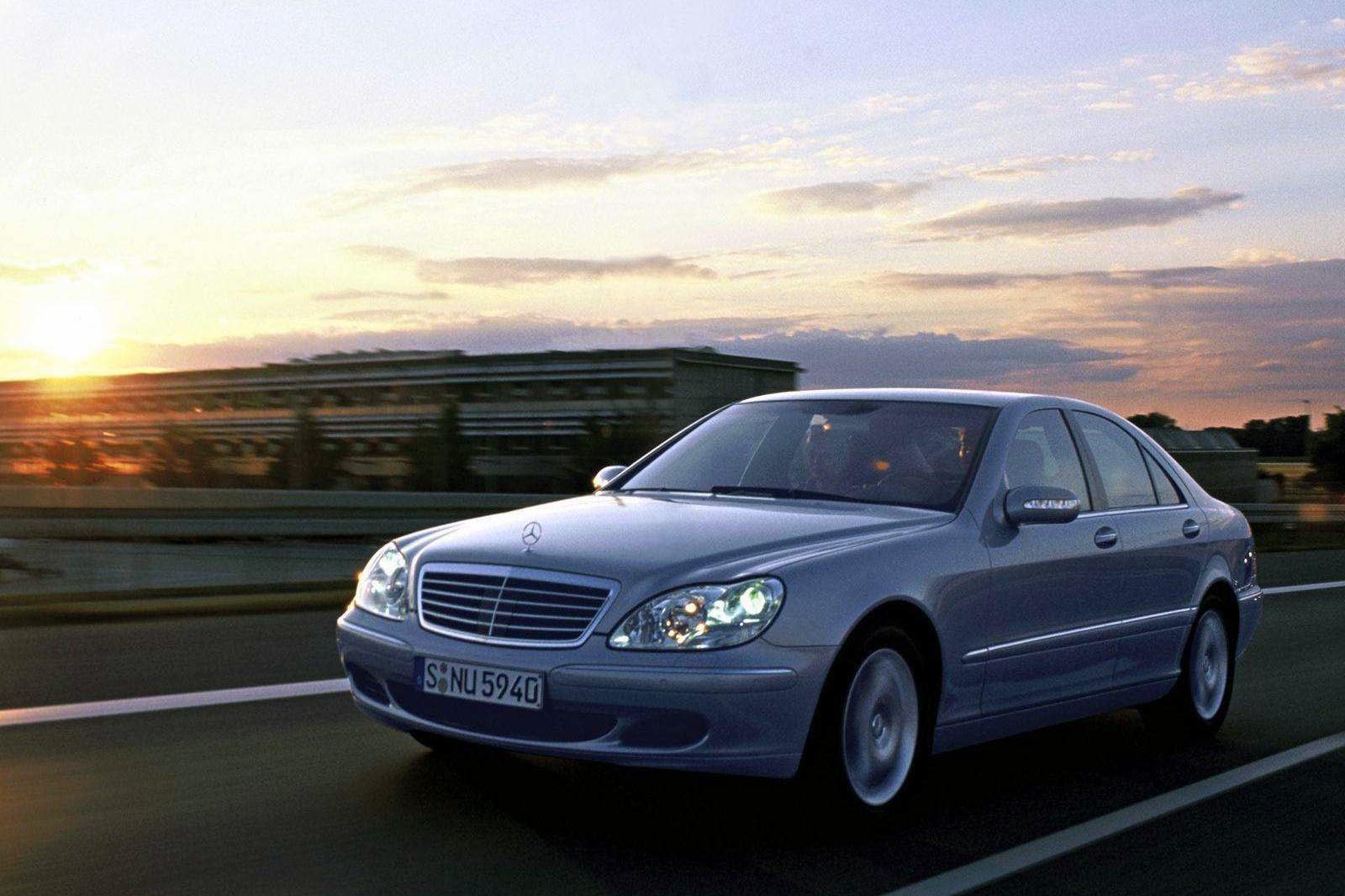 What tells fellow motorists that you’re a boss more than rolling up in an S-Class? Nothing, that’s what! Delightfully, this top-dog model can now be had for under $15,000, or about a tenth of its original price! This majestic plush-rocket served as rolling gene-pool for technologies and engineering implements that would trickle into other models and the entire industry, and shoppers can opt for a variety of V8 engines packing between 275 and 355 horsepower. A V12 was available too, packing 362. Look for rear- or all-wheel drive, the latter designated by a ‘4Matic’ badge. Premium audio, dual-zone climate control, a CD changer, rain-sensing wipers and navigation were just some of the features on board.

Some S-Class owners in this generation have reported issues with instrument cluster illumination, the navigation system and operation of the power seats. Confirm all of these components are working properly, several times, as none will be inexpensive to repair. Check the navigation screen for dead pixels, and confirm that all door-mounted controls work as expected, several times.

Lumpy power delivery, a check engine light or a rough idle may be evidence of a bad mass-air-flow sensor, and numerous owners in online forums have reported problems with the ‘AIRMATIC’ suspension system on earlier models in this generation. Air suspension is never cheap to repair when it eventually gets borked, so avoid models with it where possible. Warning signs of AIRMATIC trouble include loud and lengthy engagement of the pump, or warning messages in the instrument cluster.

Check beneath the used S-Class for rust around the jack points, noting that more rust is likely present than what’s visible, beneath the side sill covers. Note any leaks, particularly from the transmission.

Due to relatively low sales volumes and the wide variety of model variants, reliability information on the S-Class in this generation is somewhat patchy.

Shoppers are strongly advised to take any candidates they’re considering to a Mercedes-Benz dealership for a full inspection before purchase. Those willing to pay a premium for a world-class sedan that delivers enormously on comfort and prestige likely won’t be disappointed in a healthy and well-maintained unit. 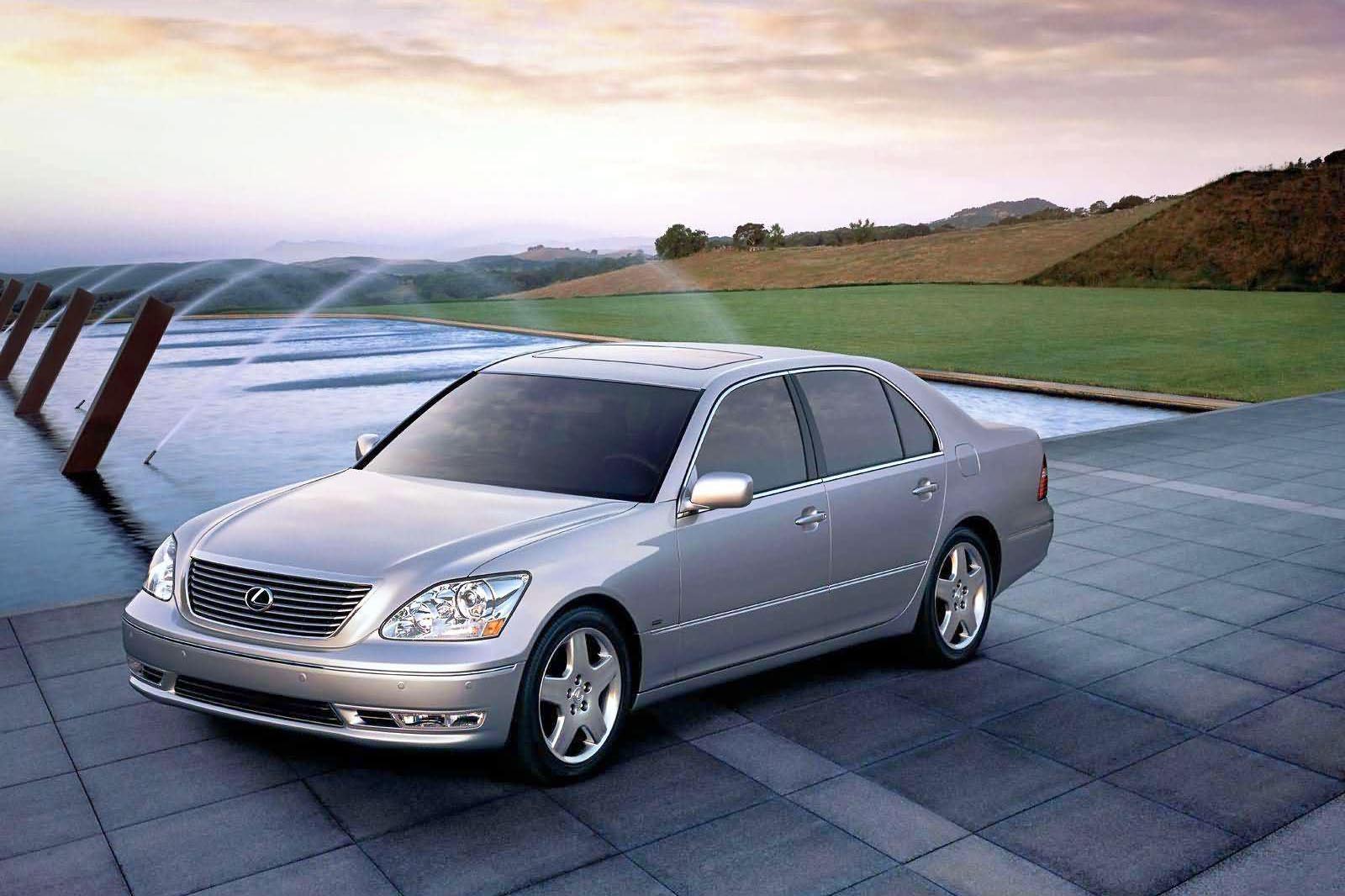 This Japanese plush-yacht is consistently rated one of the most reliable cars of all time – and though it’s not exceptionally flashy or exciting, a Lexus LS is immensely comfortable, solidly built, proven, and might be the most sensible used flagship buy going. With an array of advanced safety systems, a 290 horsepower V8 and a one-of-a-kind Mark Levinson sound system, this one’s fully equipped for top-line travels. Look for water-repellant glass, rain-sensing wipers, oscillating climate-control vents and power door and trunk closers, too. Best of all? This discreet flagship probably won’t subject you to any wallet-crushing repair bills.

No major reliability issues were uncovered with the drivetrain, though a recall was issued for a possibly-faulty transmission component. If affected, the transmission could wind up not actually parking when the shift lever is set to ‘P’, which could have expensive and embarrassing consequences. Dealers can check the transmission and replace as necessary. If you’re considering a used LS and are interested in it staying where you park it, be sure to have this looked at.

Another recall dealt with the fuel pump, which could be adversely affected by the alcohol content of fuel and wind up seizing. In this scenario, a sudden stall would occur, which could result in a crash. Some models were affected by a faulty ECU module, which could cause a world of issues. Contact your local Lexus dealer with the VIN number of the model you’re considering to see if it was affected, or if it qualifies for a free replacement.

Note that a scraping or groaning sound from the steering column may require the component to be replaced, and that some owners have reported power mirror failure and motorized telescopic steering adjustment failure. Confirm that the trunk struts hold the trunk open under their own power, and have a mechanic inspect the wheel bearings and suspension for excessive wear, especially on higher-mileage units. 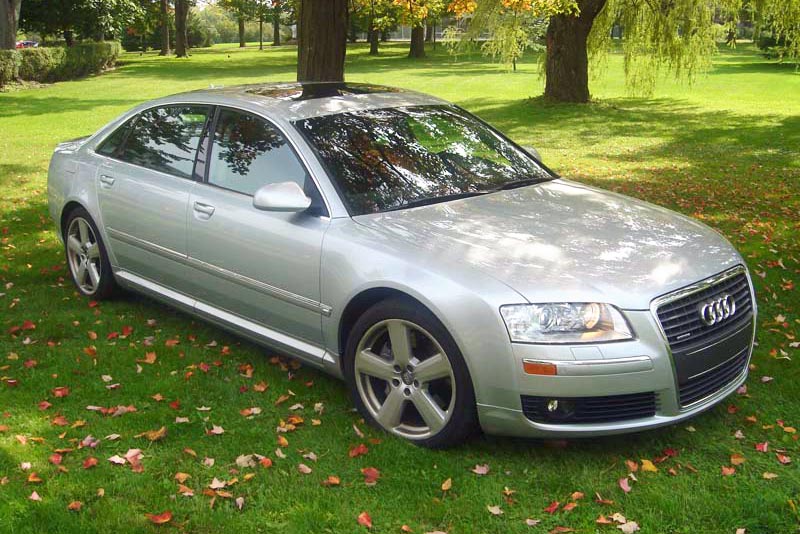 If all-weather confidence, loads of gadgets and world-class luxury are to be part of the package for your next used luxury cruiser, the Audi A8 makes a fair degree of sense. Look for standard Quattro AWD, 8- or 12-cylinder power, and boatloads of luxury. A 4.2L V8 made between 330 and 350 horsepower, and a W12 cranked out 450 ponies from six litres displacement.

Dynamic xenon lights, navigation, premium audio, a power trunk, power or motorized everything, and even adaptable air suspension were all on the menu. A full driver computer, memory seating trimmed in Valcona leather and radar-guided cruise control could all be fitted. Standard and extended-wheelbase units can be found in the used market.

At least two Audi owner forums recommend avoiding the first year of this A8 generation (2004), as it seems more prone to complicated glitches and issues.

Shoppers after maximum confidence in their purchase of a used A8 are advised to shop at an Audi centre for a 2005 or newer A8 that’s familiar to the dealer. Check all service records and ensure all maintenance and repairs are up to date.

Do all the lights work? Do all the accessories and gadgets function as expected? The remote? The windows? The power trunk? Are any warnings or check engine lights illuminated? Think wiring, bad sensors and bad computers – and look for warning signs thereof.

Confirm proper operation of all door-mounted controls, the power windows, and the trunk-closer mechanism. Have the brakes checked at all four corners, as numerous owners have reported premature wear of brake components. Other noted issues include radiator leaks, bad air conditioning system parts and bad fuel pumps. Here’s another good candidate for a full pre-purchase inspection at a dealer. 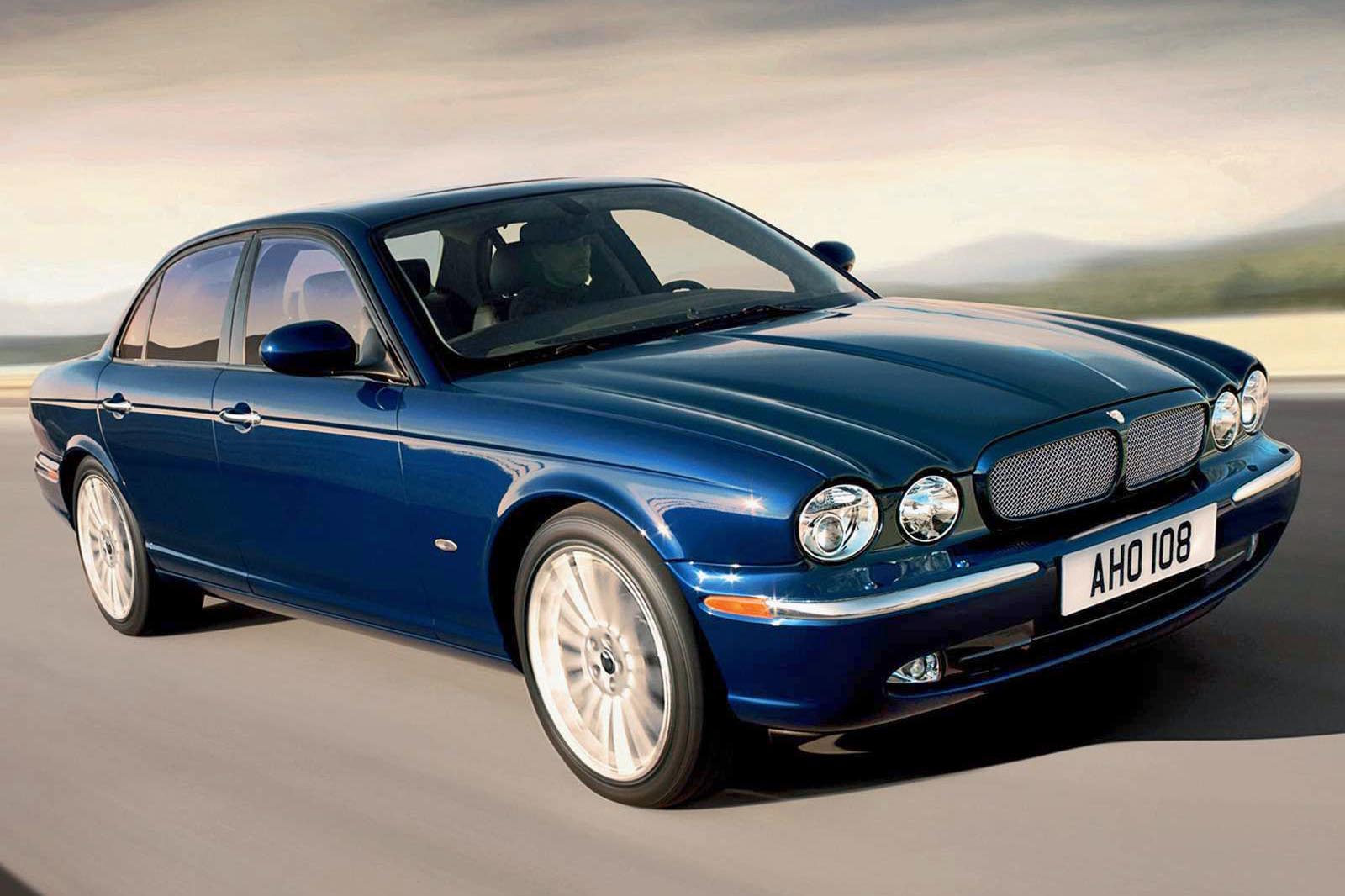 Few things on four wheels are classier than Jaguar’s fit-for-royalty flagship sedan, and nowadays, you can get an early copy from this generation for under $10,000 all day long. Look for power from a lusty V8 engine, and an even lustier supercharged V8, if you like. The finest leathers and wood trim lined the Jaguar XJ's cabin, contributing to high luxury, down to the finest detail. Space galore, a creamy-smooth ride and that stately look helped round out the package. Vanden Plas models were top-of-the-line luxury haulers, and the XJR was a supercharged hot-rod version.

Here’s another flagship sedan with air suspension problems reported in the owners community, possibly caused by a leaky air shock that causes the air compressor to run extensively, burning it out. An XJ that’s sagging in the front or rear or warning messages in the instrument cluster are key signs. Inspect the brakes for signs of premature wear, and note any strange vibration or unwelcome pulling in the steering system, which could indicate an alignment problem. Have a mechanic inspect all suspension bushings, and the condition of the driveshaft bushing, to be safe. Transmission cooler lines should be inspected for signs of leaks, too.

Confirm that the heater pumps hot air into the cabin on command, noting that any issue could be the result of a clogged heater core which will need to be flushed out or replaced. Replacement requires dashboard removal, which will turn your bank account inside out.

Finally, though the XJ’s transmission is said to be ‘sealed for life’, many owners change the fluid and filter regularly, about every 100,000 km or so, to be safe. Any noted surging, lurching, slamming or unwelcome noises or sensations from the transmission should be investigated before your purchase – or taken as a sign to move to another model.