Earlier this week, General Motors announced that Hummer, the brand known to be big, bold, brash, and loud, would be returning after a 10-year disappearance from the market. But since we won't see the new electric SUV until May and it won't hit the road until sometime next year, the announcement had us looking at some of the brand's original offerings. That's why the autoTRADER.ca Find of the Week is a Hummer, but it's a model that slid under the radar. Arriving late in the brand's run, the H3 Alpha replaced the inline five-cylinder engine with a big American V8 and added a shocking amount of shove to the "diminutive" Hummer.

The first model sold under the Hummer name was the H1, derived directly from the M998 Humvee used by the U.S. Army. It was an off-roader with the lightest pretenses of an interior, built by AM General and sold by that company originally before making a move to GM's new Hummer dealers in 1999.

Hummer's second model was the cleverly named H2. It was based on a platform that was a mix of Chevrolet truck and SUV frames, using some 2500 HD components and others from the 1500 light-duty side. Despite the GM bones and powertrains, the H2 was built, once again, by AM General. That one launched in 2002 and ran until 2009. It was still a serious off-roader, though the cartoonish styling meant that many people assumed it was more for show than for go.

Third to arrive for Hummer was the H3. This one was designed and built entirely by GM, at three factories around the world. This newest, smallest model was based on the platform that was found under the GMC Canyon and Chevrolet Colorado compact pickup trucks, but there was more Hummer to it than just the looks.

GM revised the vast majority of the components under the pickup for the H3, giving it heavier-duty parts and a reinforced chassis to help make sure that it was capable of some of the same hard-core off-roading as the original H1. Though without the helicopter drop capability or any of those other military-spec features.

The H3 had a two-speed full-time four-wheel drive system and could be optioned up with electronic locking differentials both front and rear for maximum traction. It could ford nearly 70 cm of water at slow speeds, or 50 cm at 32 km/h. It looked like a toy Hummer, but it was still capable of doing Hummer things.

All of that capability came at a cost, though. The H3 was heavy, and that put a big strain on the 3.7L inline-five that was borrowed from the Colorado and Canyon, even before adding a trailer or cargo to the mix. It was sluggish, and it was thirsty.

In 2008, General Motors came up with a time-tested domestic solution: Add cubic inches and cylinders. The H3 Alpha arrived with a 5.3L V8 packed into the narrow bay designed for the long five-cylinder. Power jumped from 242 to 300 and torque shot up from 242 lb-ft to 320. Towing capacity shot up from 4,500 lbs to 6,000, the H3 got quicker, and reports were that it ended up with better fuel economy on the road than the smaller engine (despite a window sticker that said the contrary) because the big engine didn't have to work as hard.

The Alpha package added more than just the V8. It also added new badges and made the H3's Luxury and Chrome packages standard to make things more comfortable inside and more stylish out.

With the H3 Alpha, Hummer had a small crossover with massive appeal. Unfortunately, it arrived just in time for a massive economic crisis, one that did an excellent job of curbing conspicuous consumption for years, as well as ending the Hummer brand when GM went through bankruptcy proceedings. The H3 Alpha lasted just a couple of model years, though the second year saw sales of the full line just a quarter of the year before.

This 2008 model is for sale in Stevensville, ON, south of Niagara Falls. It's a 2008 in red, and while most Hummers, even the small ones, saw extensive customization, this one looks to be stock. It does have the nearly obligatory push bumper on the front, but you wanted that anyway. With 177,500 km on the odometer, this V8-powered Hummer is ready to, well, hum. Or burble, at least, thanks to the dual exhaust sticking out of the rear. Just maybe tell people it's the new electric one? 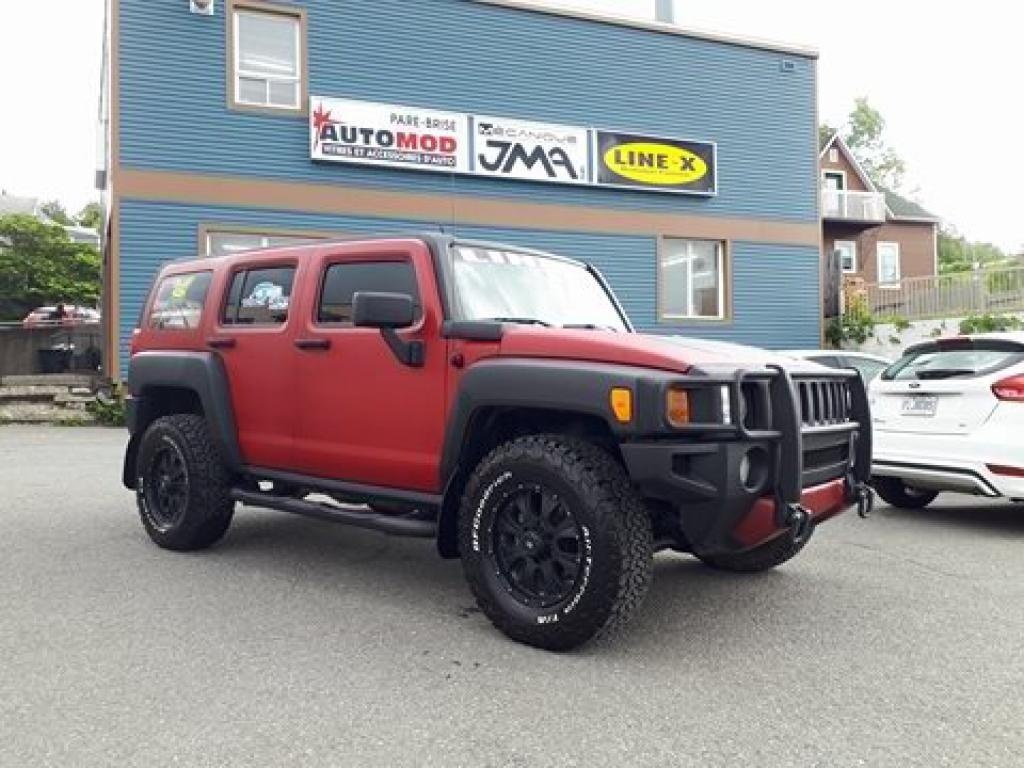